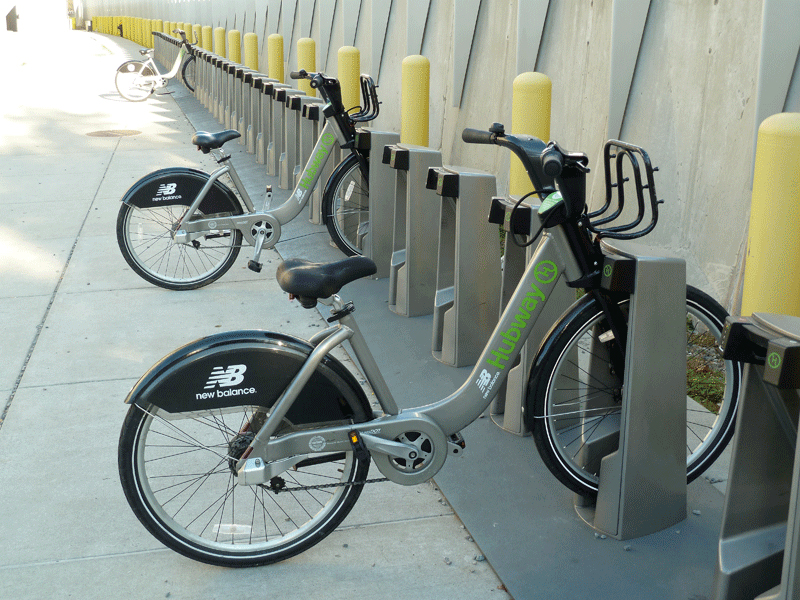 Hubway bikes are sturdy and ready to ride all winter in Cambridge. (Bobby Bascomb)

In winter's ice and snow, biking might seem like a bad idea but as Living on Earth’s Bobby Bascomb reports that Cambridge Massachusetts is joining a number of cold cities across the country that are opting to keep their public bike-share programs rolling year round.

CURWOOD: It’s Living on Earth, I’m Steve Curwood. And now, another in our series Power Shift, about the transition to low carbon energy in the Bay State.

CURWOOD: There are few things more energy efficient than generating your own transportation by pedal power. Still, as the snow and ice and dark of winter descend upon us here in the north, bicycling might seem unwise, and frankly, unappealing. But increasingly bike share programs in cold cities including Toronto, Denver, and New York are staying open through all four seasons.
Even when there’s snow or ice, some year-round riders say the roads are often clearer than the sidewalks.The Hubway bike-sharing system in the Boston area shuts down completely for the winter come Thanksgiving, except this year. The Cambridge part of Hubway is getting a winter try-out. Living on Earth’s Bobby Bascomb has the story.

BASCOMB: It’s a cold, overcast day but bike commuters in Cambridge don’t seem to mind. Some are dressed for the weather in heavy winter coats and thick mittens. Others wear sleek spandex and reflective orange jackets. At least a dozen bikers are stopped at a traffic light in Inman Square. A student, Mitali, dressed in a warm hat and long black jacket heads for the rack of Hubway bikes. She uses a key fob the size and shape of a thumb drive to unlock one.

[BEEPING OF HUBWAY LOCK, RELEASE OF BIKE FROM THE RACK]

MITALI: I love it, I think there are so many students especially that use the bikes to get to school.

BASCOMB: She finds biking easier than relying on public transit.

MITALI: I do take the bus in the evening, if it’s too late at night and I don’t feel like biking. But a lot of the buses are only every other hour so you have to wait a long time. Then I feel like I might as well just bike. I’m wearing all these layers anyway.

BASCOMB: It’s that kind of convenience that’s made Boston’s public bike-share program so popular. Roughly 9,500 people paid the $85 annual membership fee that allows them to ride bikes from any of the 129 stations located across greater Boston. But from now until March the 27 locations in Cambridge will be the only ones open.

Roughly 9 percent of people in Cambridge commute to work by bike, that’s the fifth highest in the country. So Cambridge is an ideal location for a pilot program to demonstrate how a winter bike-share program could work out in snowy New England. Charlie Sulk is a big fan.

SULK: I support the extension of the season. I really wish they had brought it out to Boston as well.

BASCOMB: Sulk is a student at MIT, and he plans to use the bikes as much as possible over the winter.

SULK: Right now I’m experimenting with ways I can still use the bikes, but for the most part I’m not going to be using it nearly as much as I was before because it’s just in Cambridge and I tend to travel between Boston and Cambridge a lot.

BASCOMB: (on tape) Do you think you’ll still want to ride the bike when there’s eight inches of snow and slush on the ground?

SULK: Yeah, for sure. The ironic thing is when the bikes go away I tend to use my skateboard more often because that’s my next go-to mode of transportation, so if I can get around on my skateboard I’m sure the bike should be no problem.

BASCOMB: And Cambridge officials want to be sure that neither snow nor rain will keep Hubway bikers from swiftly completing their journeys.

SEIDERMAN: The Hubway is really meant to be a transit system, a transportation system, for people to be able to use and that means that it really should be accessible all the time. 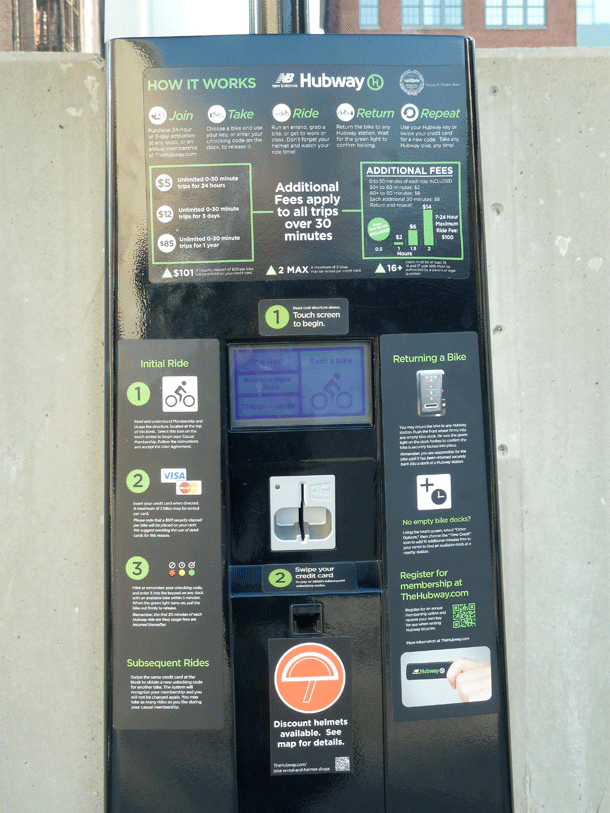 Day users can swipe their credit card and for five dollars have access to a bike for 24 hours. (Photo: Bobby Bascomb)

BASCOMB: Cara Seiderman is the transportation program manager for the city of Cambridge. She says Cambridge is particularly well suited for this winter pilot program.

SEIDERMAN: It made sense to pilot it in Cambridge because we have a bit easier time. All of our stations except for one are offstreet so they’re not going to be dealing with snow plows. Those are things that we’ll have to really think about in the future if it did get expanded in the entire system. But it was an easier decision because that obstacle, that challenge, was not in place.

BASCOMB: But when the snow does come Seiderman say they have a plan for dealing with it.

SEIDERMAN: The company that runs Hubway for us, Alta Bike-Share, is under contract and they will be responsible for clearing the stations of the snow and managing the bikes going in and out. There is also a way to electronically shut down the system so that you can’t take a bike out remotely. This has actually been done a couple times, like last year when Hurricane Sandy was approaching, the system was shut down in advance.

BASCOMB: Hubway bikes first started rolling around the Boston area in 2011. Since then it’s grown to serve some 90,000 casual users each year in addition to the annual members. The Boston system was modeled after Montreal’s bike share program, which operates in spring, summer, and fall.

SEIDERMAN: Now systems that are going into place including New York and Chicago, big cities with serious winters, are assuming that they’re going to be a year-round system.

BASCOMB: Cities like Copenhagen, Denmark and Helsinki in Finland already have year-round bike-share programs. And despite the cold they are very popular. Of course, a winter bike-share system comes with additional costs for maintenance and snow removal. At the same time revenue goes down because fewer people choose to ride. But Seiderman says it’s still worth it.

SEIDERMAN: In general, a city that’s more bikeable and walkable is more livable. There’s fewer vehicles from an environmental perspective and there’s that whole feeling of what a city feels like when there’s people about as opposed to just cars and it’s the kind of city that we want to see.

BASCOMB: Officials estimate that in a busy month of riding Hubway bikers offset 100,000 pounds of carbon dioxide and burn more than 6.6 million calories. Last year Hubway surveys asked riders what they would most like to change about the system. Seiderman says overwhelmingly the response was to extend the program year-round.

SEIDERMAN: [LAUGHS] I would say that this is apparently one of the most popular things the city has ever done based on the feedback that I’ve gotten. People legitimately call up the city or send us communication when they have a complaint about something but less often do we get the kudos but I have gotten more feedback about the Hubway being open year-round than since anything than since Hubway itself opened.

BASCOMB: The Cambridge pilot program is just getting started and surrounding cities are watching closely to see how winter biking works out here. If all goes well, next year Hubway riders might be able to peddle year-round through all of greater Boston.

For Living on Earth, I’m Bobby Bascomb in Cambridge, Massachusetts.


Institute for Transportation and Development Policy Report on Bike Shares

City of Cambridge on winter Hubway