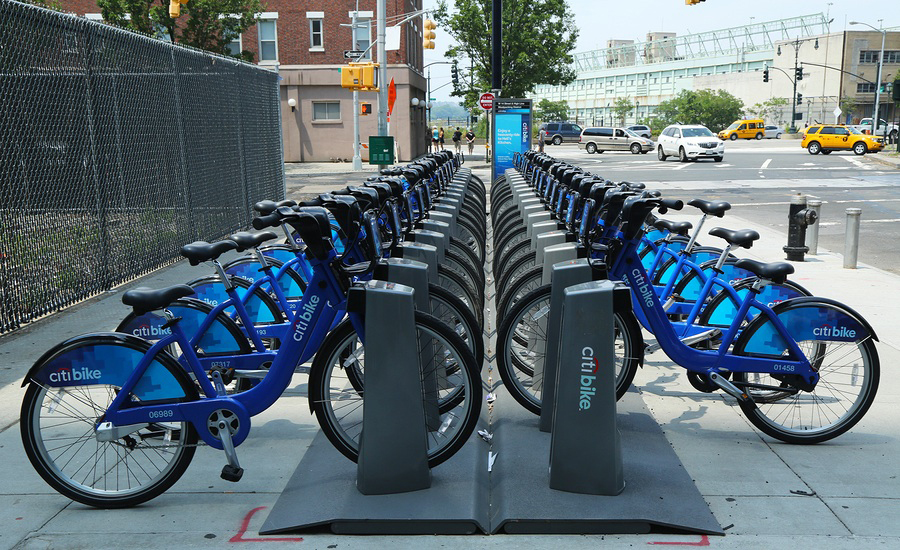 Cyclists and pedestrians account for nearly 16 percent of all highway deaths yet receive just 1 percent of safety related funding. The founder of the Congressional Bike Caucus, Oregon Democrat Earl Blumenauer, tells host Steve Curwood that a new Bicycle and Pedestrian Safety Act he introduced to Congress could change the priorities.

CURWOOD: From the Jennifer and Ted Stanley Studios in Boston, this is Living on Earth. I’m Steve Curwood. For years in America, the car has been king. As General Motors once put it, “it’s not just your car, it’s your freedom.” But increasingly Americans are finding a new kind of freedom, the freedom from traffic jams and lack of exercise that can be found behind the handlebars of a bicycle. So as driving mileage has dropped by more than eight percent in the past decade, at the same time the proportion of people commuting to work by bike has increased in 85 of 100 of America's largest cities. One of those two-wheel commuters is Oregon Democrat Earl Blumenauer, the founder of the Congressional bike caucus. The Representative recently introduced the Bicycle and Pedestrian Safety Act, legislation that he says America badly needs.

BLUMENAUER: We have an imbalance in federal transportation policies, where a disproportionate number of the injuries occur to pedestrians and cyclists, but they receive a very small portion of the overall resources that should make our transportation safer. So what we’re working on here is to have the Department of Transportation track fatalities, injuries by mode. Everybody, almost without exception is a pedestrian at some point in their journey, and you noted that we’ve just seen an explosion in cycling interest around the country, and we need to make sure that we’re doing all we can to make sure that experience is as safe as possible.

CURWOOD: Let’s talk about the safety record for bikes on our roadways. What are they like these days?

BLUMENAUER: Well, what we’ve seen in communities like mine, in Portland, Oregon, where we have had a dramatic increase in bicycle use, well over 400 percent, the accident rate is going down, but the number of accidents are going up. There’s still too many. Part of it is we’ve got cyclists who don’t obey the rules of the road, which drives many motorists crazy and, frankly, just gives me apoplexy. Part of it is we have not yet trained drivers to be careful before they get out of a car so they don’t door somebody; part of the problem is that we have not invested as much as we should in facilities to make cycling safer, separated bike lanes, signals that are geared for cyclists. 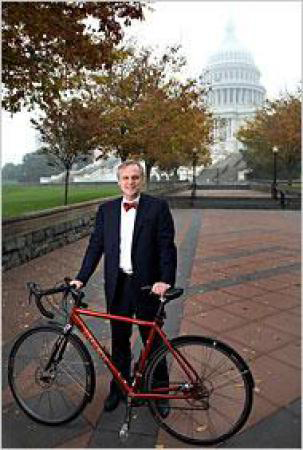 CURWOOD: Now what about the attitude of automobile and truck drivers on the road. I use bikesharing in the Boston area to do the last couple of miles of my commute. I often take the Amtrak to get into the city. And, you know, frankly, some drivers seem outright hostile to bikes coming by.

BLUMENAUER: I think that’s true. As I mentioned a moment ago, it’s important for the cycling community that they be respectful of motorists and they don’t do things - running red lights or being reckless - I think that’s important. Although I’ve had limited experience actually driving in Boston over the years, when I have, I have found there are cranky drivers that I encounter when I am a motorist. So I think that it’s not unique to the car-cycle dynamic. Part of this challenge is to help people understand that the cyclist is the friend of the person driving a car.

BLUMENAUER: Every person that’s in a bike lane next to you is not in a car in front of you. They’re not competing for a parking space at the ultimate destination. They’re not polluting the air because they’re burning calories instead of fossil fuel. We’ve not done a very good job of helping people understand how the promotion of cycling is the quickest and cheapest way to get more highway capacity.

CURWOOD: Congressman, you are famously the founder of the Congressional bike caucus. Tell me about the goals of your caucus, and tell me about some of the other members.

BLUMENAUER: The goal of the Congressional bike caucus was to help bring people together around issues of cycling in an era of partisan divide, the bike caucus is “bike-partisan.” It’s been Republicans and Democrats together. A Republican Congress member from Florida, Vern Buchanan, was telling me his cycling this year, he’s lost 35 pounds. He knew to the nearest mile how far he’d gone, and it was several thousand miles this year, and that he was just absolutely committed to supporting better bike facilities in his district in Florida and around the country.

There’s Congressman Mike Doyle from the Pittsburgh area, who determined that when he turned 60, he was going to celebrate it by going on a bike ride of over 100 miles, and he trained. He too lost 30 or 40 pounds, he raised thousands of dollars for charity, it was really quite a testimonial. So Republicans, Democrats; for me it’s been an island of agreement, and positive stories in a climate that too often is negative and partisan.

CURWOOD: And how big is the Congressional bike caucus?

BLUMENAUER: At one point we had over 230 members, a majority of Congress.

CURWOOD: Congressman, to what extent is there any kind of anti-biking caucus on Capitol Hill or other members who think that biking is really a silly thing to care about.

BLUMENAUER: Well, several years ago there was a reaction from some people in Republican leadership, cutting some ads about cycling being a stupid response to the energy crisis. Actually one incumbent Republican who cut a re-election ad against a challenger - this is a gentleman in Pennsylvania - saying what was her answer, ride a bike? And she actually had a response at a press conference to which she rode a bike, and she said, absolutely this is one of the simple common sense things we can do to make people feel better and that doesn’t add to congestion and pollution and it stretches our energy resources.

There was another person who literally came to the floor mocking our work on cycling, and I will say it invoked a pretty ferocious response. Cyclists are getting much more involved politically, and there were thousands of dollars spent against this guy who decided to poke fun and ridicule cycling, and he subsequently joined the bike caucus, I will say, and the woman who rode her bike to the press conference responding to the negative ad about cycling ended up winning.

BLUMENAUER: Well, my commute in Washington is only about a mile. For 17 years, I’ve used a bicycle as my primary way of getting around, zipping up to speak at a conference, or to a meeting at the White House. I’ve been able to burn hundreds of thousands of calories, I’ve never been stuck in traffic and I always find a place to park.

CURWOOD: What’s the bike rack like at the White House, by the way?

BLUMENAUER:[LAUGHS] The first time I did it, I actually had to talk my way onto the White House grounds. Ironically, I had been invited by Vice President Gore, to come up and talk about some environmental things, and I biked in and the Secret Service was just kind of like, “Hmmm, we don’t think so.” Ultimately it was just, “well, what if I had driven a car?” “Well, we’d open the gate and you’d come in.” I said, “Well, pretend it’s a car,” “OK, but just lean it up against the front of the White House.” I haven’t had those problems of late. There is just more and more interest in Washington, DC, generally over how much cycling has added to the vitality of the Washington, DC, comeback. 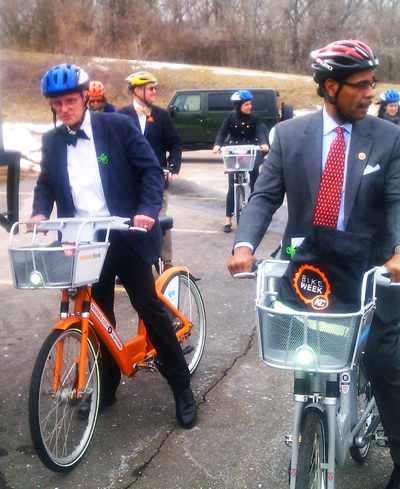 CURWOOD: What do you see as the overall trend of biking in the United States now?

BLUMENAUER: The overall trend is one of dramatic growth. In city after city, the bike commute is increasing 10 and 20 percent a year. Bicycle sharing is an interesting metaphor that has just captured the imagination of not just urban transportation officials, but the city planners around the world. There are over 650 bike sharing systems worldwide.

BLUMENAUER: Well, a bicycle is the indicator species of a livable community. This is a community that is human scale, that is, where people are safe. It’s welcoming. From my vantage point, this is a symbol of what we need to be doing with policy generally in your nation’s capital. It’s a very powerful tool and a representation of how far we’ve come.

CURWOOD: So let’s cut to the chase here. How much money is Congress willing to appropriate and authorize for biking?

BLUMENAUER: We don’t know yet. Part of the problem is we’re just having a collapse of the Highway Trust Fund. We are in a very serious way approaching the October 1 deadline where if something doesn’t happen, there will be no transportation construction money for new projects, whether they are freeways, light rail or bike paths. We have not raised the gas tax in 20 years, so we’re in a world of hurt. The key for us in Congress is to be able to face up to the fact that the Highway Trust Fund needs to be replenished, I would argue the gas tax increased for the first time in 20 years. If we don’t deal with the funding crisis, it doesn’t make a difference what your mode is, it’s going to be in trouble. 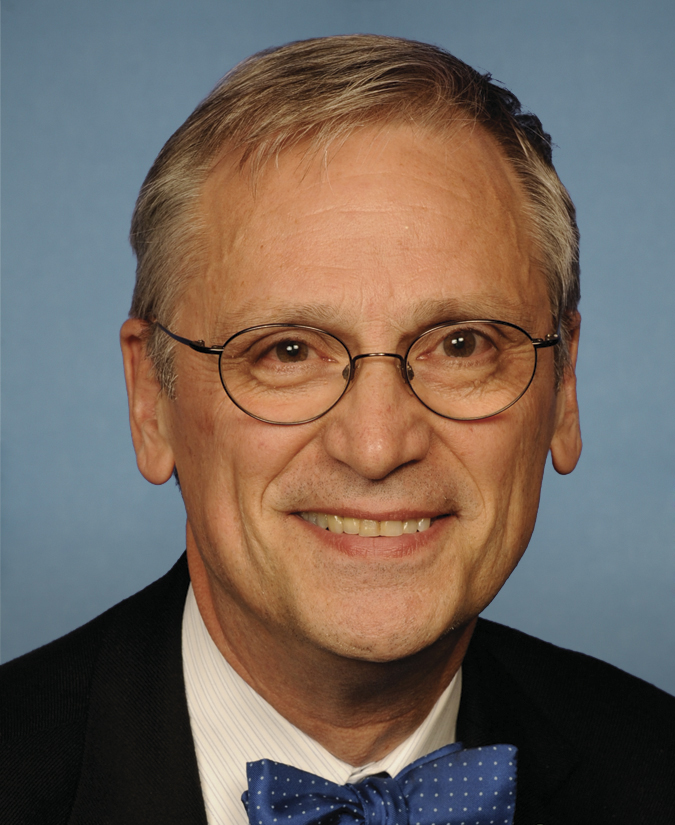 CURWOOD: Earl Blumenauer is a member of the US House from Oregon and founder of the Congressional bike caucus. Congressman, thanks so much for taking the time with us today.

BLUMENAUER: It's always a pleasure, I look forward to our next conversation.

Rep. Blumenauer’s remarks when he introduced the bill.