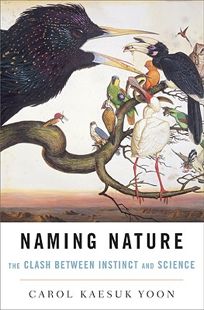 Biologist and New York Times science writer Carol Kaesuk Yoon talks with host Jeff Young about how the science of taxonomy conflicts with our everyday sensory experience of the world. Yoon’s new book is called Naming Nature: The Clash Between Instinct and Science.

Now, the practice of putting Latin names to critters and plants might not sound like a setting for conflict and drama, but that’s just what she found. As her subtitle tells us, there’s a “clash between instinct and science.”

Ms. Yoon discovered that as the science of taxonomy ordered things according to evolutionary ties it alienated those of us who relate to the natural world through instinct.
Most of us rely on our senses to make sense of the living world—it’s a powerfully human and unifying impulse Ms. Yoon names the umwelt.

YOON: So this basic way that humans have of seeing and perceiving the world is what creates the universals that are seen across all different people and across time in how people order and name life. It’s all – it all comes down to having the same basic sensory perception of life out there. 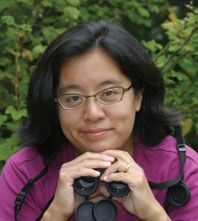 YOUNG: Now you have this great example of how some names for animals seem to make sense regardless of the language. And I’d like you to walk us through this short quiz here. Now, this has to do with a Peruvian tribe and their names for different fish or birds. And we’re supposed to guess which one sounds like a bird and which one sounds like it’s a fish.

YOON: Okay, so the first pair, the first name is chunchuiket and the second name is maoozt.

YOON: Okay. The second pair is, the first name is chichikia and the second one is katon.

YOON: Teris and the second one is takaikit.

YOUNG: Aha, now, okay. I have read your book, so I’ve already done this.

YOUNG: But I remembered when I originally read this, these were my guesses: I thought – and I’m gonna mangle the pronounciation here – the chunchuikey sounded like a bird because it kind of reminded of chickadee, for example. And same with the next one: chichikia I thought sounded like – I honestly can’t remember how I guessed on the third one, so I can’t really say.

YOON: Oh, I bet you were right. I bet you guessed takaitit

YOUNG: Okay. So the right answers are…

YOUNG: So I did pretty well.

YOON: It’s probably what – yes, you did very well.

YOON: That’s what so interesting and so bizarre about it really. Over and over again in language after language and people after people, animal sounds are very often used as the actual name for the organism.

YOUNG: So you would say this is the umwelt coming through here.

YOON: Absolutely. Yeah, it’s part of what just from having a human brain and body and sensory perception of the world that we have that when we hear bird sounds it just makes sense to use to say “oh, you know, that’s that chickadee, that chickadee, chickadeedeedee.”

YOUNG: It’s so obvious and yet it’s kind of profound that that’s what’s going on.

YOON: That’s exactly it. It’s either – depending on how you look at it, it’s ridiculously obvious and not interesting or incredibly profound and very interesting which is obviously how I feel about it. And it’s this whole idea of actually being able to see how you see, seeing your frame of reference and stepping back and realizing that what’s around you and how you perceive the living world and how you name it, how you see basically what is out there is not just a matter of you taking in sensory data. It’s about this very human perception, a very human lens that you’re looking through that shows you what the living world is. It’s the human view of the living world.

YOUNG: You also tell the story of these poor people who for whatever reason have lost the ability to name the things that they see in nature. Tell me about them?

YOUNG: So while neurologists were finding this out and anthropologists were out these interesting similarities about how folk taxonomies work, what was going on with the science of taxonomy?

YOON: Well, around the same time, around the 80s there was a revolution going on in taxonomy. A man named Willi Hennig had figured out a way to order and name living things that was based much more on evolutionary relatedness than had ever been done before. And his followers were called cladists. This group of taxonomists was going around saying this is a whole new way to order and name the living world. And the problem was that once cladists started going through all of the organisms that people have long studied and thought about, they started discarding a lot of things that people didn’t want to see discarded. And one of the groups that they threw out was the fish.

YOUNG: See this makes no sense. Why are there no fish as a group in taxonomy?

YOUNG: So help me understand why did fish have to go away?

YOON: Maybe the easiest way to understand it is with the example that cladists themselves used when they were going around trying to show everyone why fish couldn’t be a real group. So, if you try to figure out what say the evolutionary tree is of three organisms, so a salmon, a lungfish and a cow, it seems pretty obvious at first if you look at a salmon – it’s a fish. Everybody knows what it looks like. It has scales, it lays fishy eggs, it swims around in the water. Lung fish – same. And then there’s a cow, which everybody knows what it is.

YOUNG: One of these things is not like the other.

YOON: [laughs] That’s exactly right. And so you say, “well, it’s really obvious. The two fish go together and the cow goes off by itself on a separate branch of the tree.” And then what cladists proceeded to show people was it really isn’t that simple. So if you look at a lungfish, as the name suggests a lung fish has lungs. And it can breath air. And the thing about the lung fish is that like the cow, it actually came out of the lineage of fishes that made their way onto land and eventually gave rise to the vertebrates. And so if you make a correct evolutionary tree, what you find is that lungfish and cows are more closely related to each other. They more recently share a common ancestor with each other and they do with salmon. And so the problem is if you follow the rules that Willi Hennig and the cladists set out, if you go back to that original fishy fish ancestor and you look at all its descendents, you see the lungfish, you see the salmon, but you also see the cow. It’s in there. But if you don’t want to have all these other things that you never would think of as fish be included as fish, then you’re just gonna have to abandon the fish all together.

YOUNG: And that’s what happened?

YOUNG: But this victory for science has not necessarily played out well for the rest of us, has it?

YOON: No, I don’t think it hasn’t. I think the problem is that the more and more different that scientific ordering and naming has become from umvelt based naming, from just how things appear to us, and your umvelt tells you there is definitely such a thing as a fish. There is a group known as a fish. It’s one of the universal groups that everyone recognizes.

If we seed all of the authority to saying what’s out there and how it’s grouped and what it’s named – which is basically a what of saying what it is – to science, and we leave ourselves only with this very, very rigid evolutionary view of the living world, we lose all these other ways of seeing things. And we lose our own way, our own most natural way, the sort of umvelt based way of seeing things in the living world, which is really important to have because it’s the way – it’s the most profound and sort of one of the deepest ways that people connect with living things, I think.

YOUNG: Carol Kaesuk Yoon. The book is “Naming Nature: the clash between instinct and science.” Thank you very much.


For more on Carol Kaesuk Yoon and her book “Naming Nature,” click here.