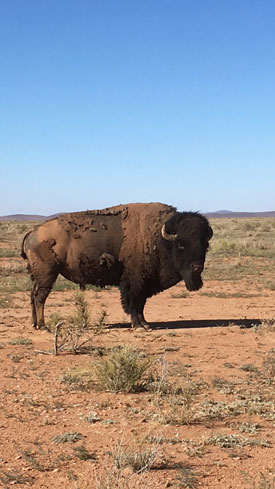 Bison tend to graze on a wide variety of plants in open areas and encourage a diversity of grasses on the arid Great Plains. (Photo: Bobby Bascomb)

Bison, which are native to the great plains of North America, have many ecological advantages over their cattle cousins, which were introduced by Europeans. Living on Earth’s Bobby Bascomb reports on ranchers in Mexico who are breeding bison to help the species rebound and manage their land more sustainably.

CURWOOD: Ah, home on the range… Two centuries ago the Great Plains of North America from Canada to Mexico teemed with prairie dogs, pronghorn, and bison or buffalo, and inspired that iconic song. Today those herds of bison are few and far between, after massive slaughters and much grassland went under the plow. But from Alberta to Chihuahua, bison are coming back, and Living on Earth’s Bobby Bascomb visited a ranch in Janos Mexico that’s part of the effort to restore them.

BASCOMB: The great plains of Mexico are dry, mostly tan in color. But a bird’s eye view reveals dark brown squares of tilled land waiting to be planted and bright green circles - irrigated fields of wheat, corn, or alfalfa. But for the spine of the Sierra Madre mountains, northern Chihuahua looks a lot like Kansas.

I’m here to check out the El Uno bison ranch near the town of Janos. Flora Moyer greets me when I arrive.

BASCOMB: Thank you, so windy today!

FLORA: Janos is where the wind was born apparently.

BASCOMB: Really? It feels that way.

FLORA: So they say. So we have been weathering lots of wind these last few days. I’m Flora.

BASCOMB: Flora is the coordinator of the private lands conservation program for the non-profit Fundo Mexico, the Mexican Fund. Holding her cowboy hat on her head so it doesn’t fly away, she leads the way out of the wind and into the El Uno ranch. Flora says it’s always this windy here. 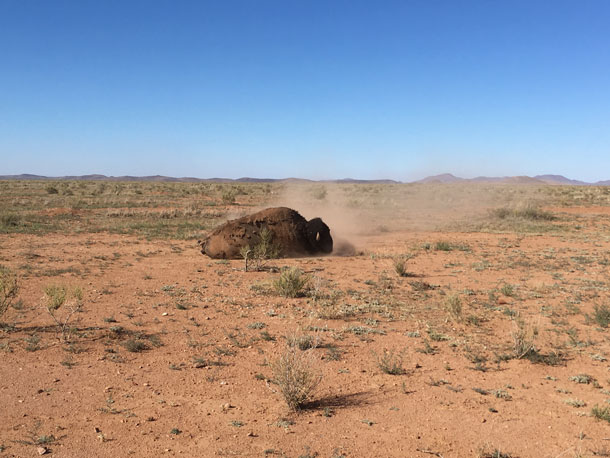 Bison frequently roll on the ground and create small basins that hold moisture and serve as microhabitats for a variety of plant and animal species. (Photo: Bobby Bascomb)

MOYER: But what has been increasing are the dust storms. And so you’ll see these sort of these dirt devils all around. Yesterday, you couldn't see the entire mountain range that's on the other side of the valley, which is not that far away, and pretty massive. And it just was completely disappeared behind the dust clouds.

BASCOMB: Those dust clouds are a result of years of cattle grazing and water-intensive agriculture on semi-arid land.

MOYER: These processes of desertification that come from the, mismanagement of the land and the overgrazing that has resulted, so you have all this barren land, but also, because of all of the agriculture that has been brought in has loosened up all the soil that doesn't have vegetation for large periods of time. It's just been more and more that there are these events where the valley is just filled with dust.

BASCOMB: But Flora says Fundo Mexico acquired this property with the hope of addressing the erosion problem and at the same time promoting sustainable ranching.

MOYER: The goal of this property is to create a demonstration site where we set out from the beginning to have a working ranch operation that has conservation goals integrated into its operation. So we really want to be an example that neighboring ranches or other properties in the area, can look at and say, okay, if they can do it, then we can do it. 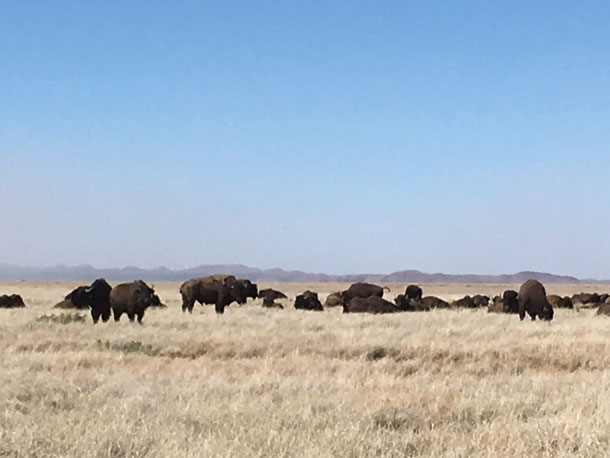 A group of females and calves at El Uno Ranch in Janos, Mexico. (Photo: Bobby Bascomb)

BASCOMB: Like many ranches in the area, El Uno makes money from cattle ranching. But cattle, introduced by Europeans, can degrade land in ways their native cousins, bison, do not. Bison historically ranged from Southern Canada to Northern Mexico. West to the Rocky Mountains and possibly as far east as Florida and New York. Roughly 30 million bison roamed North America before white settlers arrived. By the turn of the century there were fewer than 600. El Uno is hoping to help the species recover while sustainably managing the land and turning a profit.

A tall order, but Pedro Calveron is up to the challenge. He’s the self-described ranch bison whisperer.

CALVERON: If you don’t know how to talk bison it really becomes a problem.

BASCOMB: Pedro has a short black beard and wears a long sleeve plaid shirt with a brown handkerchief tied around his neck. His official title is ranch manager and I’m tagging along as he drives a pickup truck around the ranch to check on the herd. At more than 45,000 acres, El Uno is three times the size of Manhattan so we drive for a while before we find a large group of females and calves.

CALVERON: The one who is laying has his calf right in front of her. And the other one is nursing their calf.

BASCOMB: We get out of the truck to get a closer look.

CALVERON: OK, so just be quiet and don’t look the herd to the eyes.

BASCOMB: Any other advice?

CALVERON: No, no just stay with me.

BASCOMB: He pauses to tie his cowboy hat under his chin so it won’t fly off in the wind. We walk through ankle high brittle yellow grass towards the herd of one-ton animals and their babies. 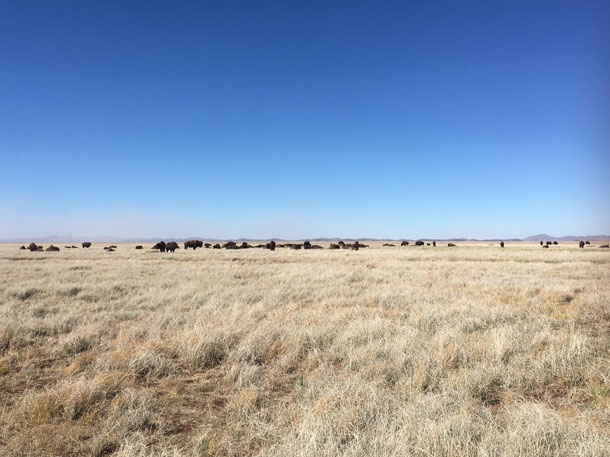 CALVERON: Can you see the bunch of newborns here?

BASCOMB: Yeah, they’re tiny. How old are those, you think?

CALVERON: The darker ones, more than a month and the lighter ones around a week.

BASCOMB: Pedro says bison have two advantages over cattle when it comes to managing the land sustainably. First, bison tend to lay down and roll on the ground, which creates bison sized basins on the land, and that keeps more water on the dry landscape.

CALVERON: The moment that you have moisture, or rain, you are able to maintain the moisture in those basins.

BASCOMB: And those moist basins can create microhabitats for a variety of animals including burrowing owls. Some wildflowers and grasses that pronghorn antelope feed on also like bison basins. And Pedro says he’s noticed another advantage that bison have over cattle.

CALVERON: They are less selective than the cattle to eat vegetation so they’re going to graze more this kind of grass more shrubs than the domestic cattle.

BASCOMB: They eat the grass more indiscriminately so I would guess that you would have more different types of grass as opposed to a monoculture growing up.

BASCOMB: So, do you think the bison encourage a diversity of grass locally?

BASCOMB: Pedro’s observations are backed up by many studies comparing cattle and bison. Laura Paulson is an independent consultant focused on sustainable ranching policies. She used to work at El Uno Ranch and says bison tend to roam more than their cattle cousins.

PAULSON: The bison make very large movements across the land throughout the day for grazing instead of staying in one area like cattle do.

BASCOMB: Cattle tend to congregate near trees and water sources, and can lead to erosion in riparian areas. Bison prefer to graze in open areas and travel far in a day, creating those microhabitats, and leaving their fertilizer behind.

PAULSON: And then, generally speaking, bison are considered hardier, more adaptable animals. They can withstand heat and cold, better than cattle. And in fact I would say that they are the perfect North American animal if there is one.

BASCOMB: Indeed, President Obama declared bison our national mammal in 2016. And Laura says bison have at least one more advantage. 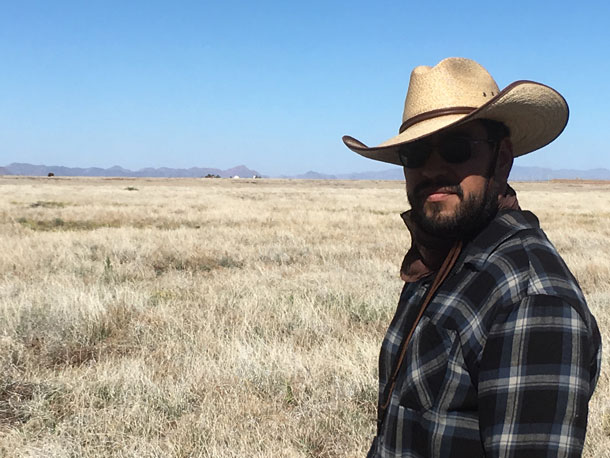 PAULSON: Research indicates that bison meat is leaner and more nutritious than beef.

BASCOMB: Bison meat is lower in fat and calories than beef and higher in protein. In the US bison are considered livestock. There are a few wild herds, mostly in public lands like Yellowstone and Wind Cave national parks, where roughly 5,500 bison still roam free. But private ranchers graze far more bison as livestock. Ted Turner alone raises more than 50,000 bison, some of which end up on the menu at his restaurant chain, Ted’s Montana Grill.

South of the border, in contrast, bison are managed as wildlife and their sale for consumption is prohibited. It seems counterintuitive but Laura says there is a case to be made for opening up new markets for bison meat in order to save the species.

PAULSON: These are some of the public policy issues that do need to be looked at closely and really figured out how can they be modified in a way that would be a win win for both the conservation authorities in Mexico as well as private landowners who are interested in working with bison?

BASCOMB: And that’s a question that Pedro at El Uno in Mexico is struggling with. He says the ranch can support up to 800 bison. But they plan to stop breeding them at just half that number and split the ranch evenly between bison and cows. They need to turn a profit to maintain the ranch and demonstrate to other ranchers how that can be done sustainably. But they also want to be leaders in the bison conservation movement.

CALVERON: We are right at the limit of the distribution at the South. So the genetic of the bison here in El Uno is already adapt to this desert ecosystem. So, looking at the big picture between Canada, United States and Mexico, and northern Great Plains and everything. If there is more interest or there is more initiatives to create more conservation herds, we are the ones who has the animals ready to be part of those conservation herds because they already adapt to these conditions on the desert.

BASCOMB: So, you already have some genetic diversity to offer to other ranches.

BASCOMB: El is Uno is currently home to 206 bison and they expect have about 230 by the end of the calving season. But unless they can find a market for bison they will have to stop breeding far short of what the ranch could support. Economic necessity demands they continue running cows even though they can be degrading for the land.

For now, Pedro says they’ll continue experimenting with the best ways to manage their herd with the hope of conserving bison and impacting sustainable land management far beyond this one ranch.

For Living on Earth, I’m Bobby Bascomb at the El Uno ranch in Chihuahua, Mexico.

NOTE: This story has been updated to reflect that El Uno ranch was donated to Fondo Mexicano by the Nature Conservancy.