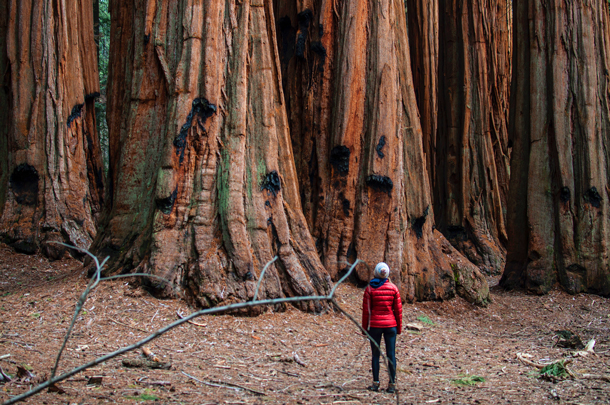 Giant sequoias are the largest trees on earth by volume, and with a lifespan of more than 3,000 years, they’re among the oldest. (Photo: Vitto Sommella on Unsplash)

This installment in Living on Earth’s occasional series on America’s public lands takes us to Sequoia and Kings Canyon National Parks in California, which boast some of the biggest trees in the world and the tallest peak in the lower 48 states. Savannah Boiano of the Sequoia Parks Conservancy talks with Host Bobby Bascomb about the highlights of these jewels of the national parks system, including the giant sequoia trees as well as hundreds of miles of hiking trails.

BASCOMB: The latest installment in our “Exploring the Parks” series brings us to the ancient trees and jagged peaks of Sequoia and Kings Canyon National Parks. The two contiguous parks offer a huge diversity of habitats. At more than 14,500 feet, Mount Whitney is the tallest mountain in the contiguous US, and habitat for animals including pika, a mountain dwelling cousin of the rabbit….

BASCOMB: Much lower, at just 2,000 feet, you can hear the dawn chorus at Big Oak Flat, featuring the dark eyed junco, oak titmouse, and the northern flicker.

BASCOMB: Add in some of the largest trees in the world, the sequoias, and Sequoia and Kings Canyon National Parks have a lot to offer. Our guide to the parks is Savannah Boiano, the Executive Director of Sequoia Parks Conservancy. Welcome to Living on Earth!

BOIANO: Thank you, thank you for having me. 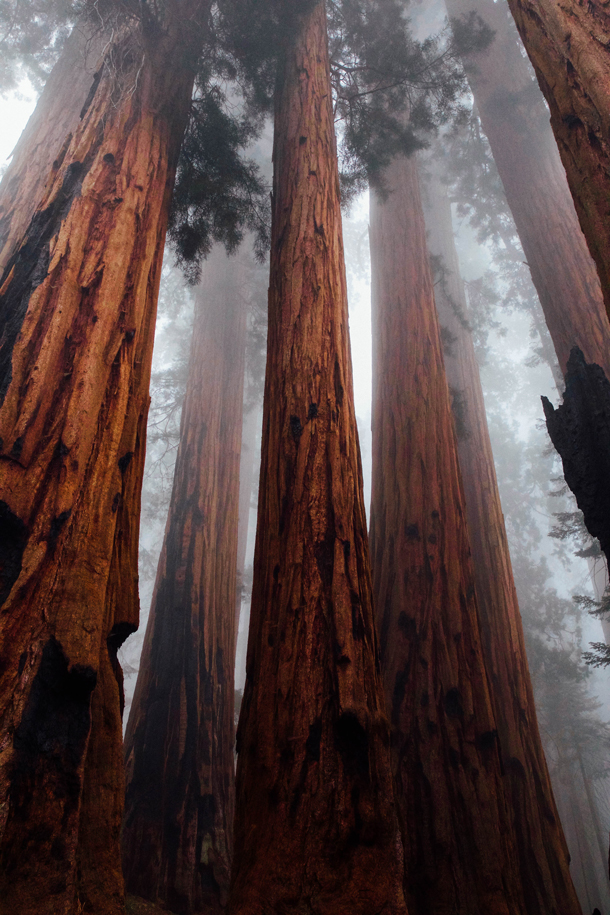 BASCOMB: For someone that's never been to either of the parks, can you sort of describe them before me, you know, paint a picture of what they look like there.

BOIANO: Oh gosh, they are stunning jewels. So Sequoia National Park and Kings Canyon National Park both lie in some of the steepest section of the Sierra Nevada. For those familiar with California, typically people are familiar with the Sierra Nevada kind of in regards to Tahoe or Yosemite National Park, and those landscapes were heavily glaciated, and they're more rounded and kind of more user-friendly in a lot of ways. And when you go south in the Sierra Nevada, things tend to get very, very steep. And so if you're looking at 14,000-foot peaks, Sequoia and Kings Canyon National Park have the majority of the 14,000-foot peaks for the Sierra Nevada, our highest being Mount Whitney. So Sequoia National Park starts at about 1,000 feet and goes up to 14,495 feet at Mount Whitney. And then Kings Canyon National Park starts in the, you know, 6000-foot range, goes up, and then goes precipitously down into a beautiful canyon; kind of rivals Grand Canyon as far as the depth of the canyon. So, we have a very dramatic landscape. And because of that dramatic landscape, it is considered an International Biosphere Reserve and it protects some of these beautiful life zones going from the foothills all the way up to the alpine regions.

BASCOMB: And I've read that there's over 800 miles of maintained trails in the parks, but the majority of them are only reachable by backpacking. What do you recommend for people that might be interested in doing something like that? 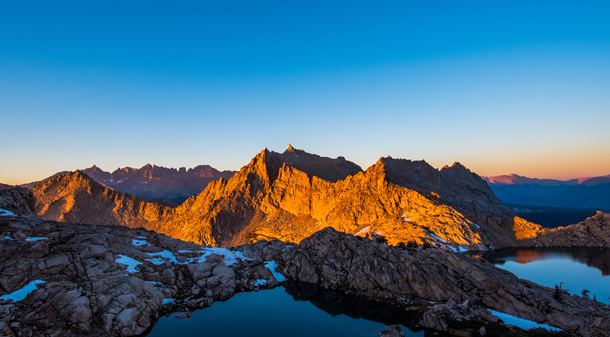 BOIANO: There are so many backpack trips here. The Rae Lakes loop in Kings Canyon National Park is very popular, you head out from Cedar Grove and walk from the end of a road all the way up into this beautiful subalpine valley with turquoise-colored lakes and wildflowers and a ranger station. There's one area actually, or a couple areas, where you can backpack into giant sequoia groves, and spend your night under those giants, looking up into those towering trees. And then in Sequoia National Park, some of the best backpacking, or most popular backpack spots, are out of the Giant Forest area which take you towards the Mount Whitney region, or even out of Mineral King where you're jumping off into the wilderness from about 8,000 feet and going up into the subalpine and alpine regions.

BASCOMB: It sounds like you have to be in pretty good shape; is this something that you think would be a family-friendly endeavor?

BOIANO: Yes, actually, you know, my husband and my daughter and I started backpacking the Sierra Nevada when she was four. We decided that she could go one mile per year of her life. So you know, she started off at four, and we went four miles for that day. And then we had a camping spot that we had picked out. And every year we add a mile to her age, and this year, we'll add a mile and we'll do, you know, 11 miles and that could be over, it'll probably be a day, but it could be over the course of two days. And then we'll find a backpack trip. So you know, some of it is with preparation before you come to the parks and knowing what your limits are. And knowing that you're going to be traveling at the speed and the ability of the least experienced or the slowest person in your group. And if you know all of those things beforehand, it can be very doable as long as you're kind of maintaining those expectations.

BASCOMB: So for somebody that's maybe not quite ready to hike the tallest mountain in the contiguous United States or you know, hike 11 miles with their child, is there something you can recommend for just a day or two, to sort of get a feel for the parks? 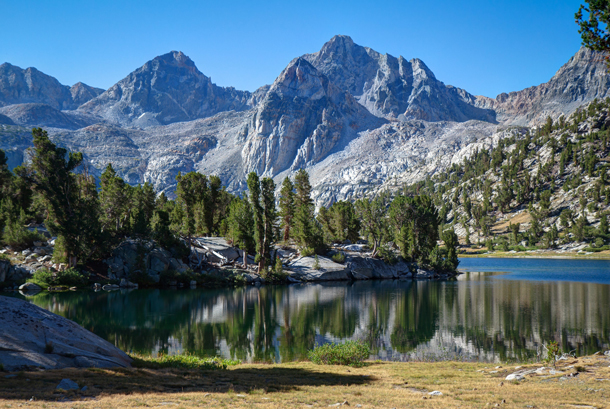 BOIANO: Oh, my gosh, yeah. So of course, you want to come to these parks, and you want to check off some of the very popular features. And they're popular for a reason, because they're just stunning opportunities to experience, you know, America's national parks. So, I really like sending people to see the General Sherman tree. It is beautiful, and it's majestic, and you get a sense of perspective and size and your own size. And within the Giant Forest alone, you know, not only seeing the General Sherman tree, but there's 40 miles of walking trail just in that grove alone. Within that grove, you can hike up Moro Rock and stand perched above the giant sequoia grove and look down on that.

BASCOMB: Yeah, these trees are just so huge. It's almost, I think, hard to wrap your mind around the size of them, and the longevity.

BOIANO: Yeah, they're a sight to behold. You know, they're not the tallest trees in California, that distinction goes to the coast redwoods, where they are a full 10-story building taller than a giant sequoia. But when you get to the giant sequoia zone, those trees are much larger than their cousin, the coast redwood. They are bigger by volume, so they're a lot wider at their base. You know, for some of the monarch, the biggest at its base would be the General Grant tree. And the General Grant tree in Kings Canyon National Park, you could take a motor coach, park it lengthwise behind the General Grant tree and just make out the windshield wipers and the tailpipe.

BASCOMB: Wow, amazing. Now, I understand another thing that is popular in the parks is stargazing, and you are in a pretty good position for that. Can you tell me more?

BOIANO: Yeah. You can, whether you're staying at a park lodge or you're in the campground, or you're just, you know, late into the night, you can go on top of Moro Rock and on a full moon you can watch the full moon rise and the sun set, from that vantage point. It is a pretty cool experience. And then, you know, on a new moon, when everything is dark, you can be at one of our park lodges and go outside and just take a few steps from the lodge itself and look up and see really dark skies.

BASCOMB: Now, do you have a personal favorite, or a story that really stands out to you in your experience in the parks that you like to share with people? You know, a highlight of your experiences there?

BOIANO: Oh, I think you know, Moro Rock and watching the full moon rise over Moro Rock and watching the sunset is an incredible experience. I do tend to like backpacking myself; it just kind of takes me away from the office and technology and allows me to really spend some quality time with my family. And you know, we go nice and slow and enjoy the things along the way. Last year, you know, my daughter and I went up towards Hockett Meadow out of Mineral King. And we just took our time, and we found so many pika and chatted with them, and saw the birds. And so for me, going into the backcountry, it's not the distance, it's the journey of unhitching myself and my daughter from, you know, everyday life and just reconnecting, and I think that's one of the things that's great about Sequoia and Kings Canyon National Park. It's not as developed as other parks in California. And so it really is an opportunity to disconnect from things, and reconnect to those, you know, you're traveling with, or even yourself.

BASCOMB: Savannah Boiano is the Executive Director of Sequoia Parks Conservancy. Savannah, thank you so much for taking this time with me today.

BOIANO: Well, thank you for having me. It's been a pleasure. 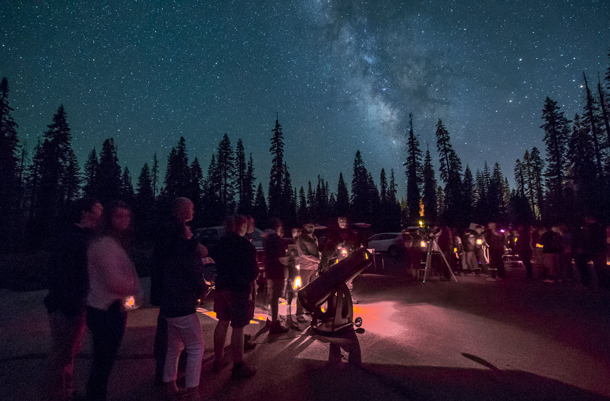 CURWOOD: We stay now in Sequoia and Kings Canyon National Parks in the company of black bears.

CURWOOD: Black bears can make this huffing sound after being scared, akin to a sigh of relief.

CURWOOD: These black bear recordings come to us courtesy of the National Park Service Soundscape Library.

And you can find a link to their audio recordings, interactive maps, and photos on our website, LOE.org


Plan your visit to Sequoia and Kings Canyon National Parks

About the Sequoia Parks Conservancy

The Soundscape Library of Sequoia and Kings Canyon National Parks