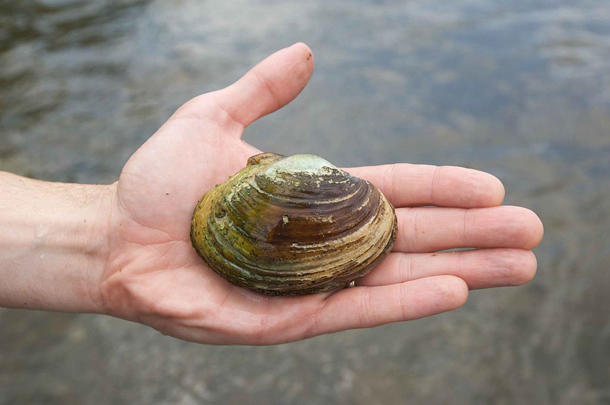 Freshwater mussels are among Earth’s most fascinating and underappreciated species, and sport unique and evocative names like the “spectaclecase”, the “fuzzy pigtoe”, and the “orangefoot pimpleback pearly”. They’re also among the most endangered group of organisms in the United States. Now, in response to legal action by the Center for Biological Diversity, the U.S. Fish and Wildlife Service has agreed to designate critical habitat for four endangered freshwater mussels in 18 states. Tierra Curry of the Center for Biological Diversity tells Host Bobby Bascomb about the enthralling lives of freshwater mussels and why they’re crucial indicators of freshwater ecosystem health.

The U.S. Fish and Wildlife Service recently protected critical habitat for four species of endangered freshwater mussels. The mussels have been protected as endangered since 2012, but nothing had actually been done to actually protect their habitat, until the Center for Biological Diversity stepped in with a lawsuit six years later. Freshwater mussels may not at first glance be the most charismatic critters, but they do play a critical role in the streams, lakes, and rivers they call home. Here to tell us more is Tierra Curry, a Senior Scientist with the Center for Biological Diversity. Welcome back to Living on Earth, Tierra!

CURRY: Thank you so much, I couldn't be more excited to talk about freshwater mussels.

BASCOMB: And by the way, congratulations on getting this mussel habitat protected.

CURRY: Thank you so much. It's gonna protect mussels in 18 Eastern states. So it's a really big deal.

BASCOMB: These are freshwater habitats, right?

CURRY: Right. Like, most people don't even know that freshwater mussels exist; people know that there's mussels in the ocean and cool coral reefs. But in the rivers in the US, especially in the East and Southeast, there's a whole underwater world of mussels and crayfish and beautiful little fish that are just as beautiful as, you know, Nemo, and all of his friends.

BASCOMB: [LAUGHS] So first of all, why should people care about freshwater mussels, if most people, as you said, have not even heard of them? Why should we care, what makes them important or special?

CURRY: They are the coolest, most important, and most underappreciated, and most endangered animals in North America. They really embody the health of the rivers. I mean, our fate is tied to the fate of freshwater mussels. Whether they live or survive tells the story of whether or not we're doing a good job taking care of our creeks and rivers. And currently, we're really not. So in a nutshell, that's why people should care, or I guess I should say in a mussel shell!

BASCOMB: [LAUGHS] In a mussel shell. So, what's cool about them? Give me some fun facts. 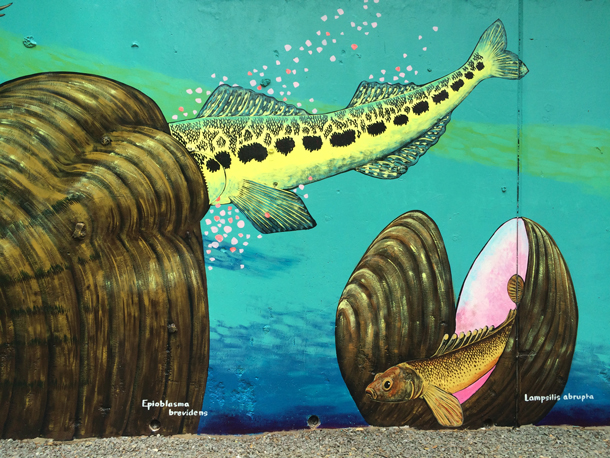 CURRY: Everything is cool about them. So, they can live for hundreds of years, making them one of the longest-lived invertebrates. They have wonderful names like the fuzzy pigtoe, and rough rabbits foot, and delicate spike, and each one of them is kind of individual. If you didn't know about them, and you saw them on the river bottom, you'd probably just think they were a rock, but each species has a unique method of reproduction, and a cool name, and different colors and patterns, just beautiful elegant shells with bumps or ridges. The four that we just got an agreement with the US Fish and Wildlife Service to protect critical habitat for, are the snuffbox, sheepnose, spectaclecase, and rayed bean.

BASCOMB: Now you sound pretty excited about freshwater mussels, pretty passionate about them. What draws you to these little creatures so, so strongly?

CURRY: They're absolutely my favorite species because each one of them has an individual story and a colorful shell and shape. They're kind of like the Garbage Pail Kids collectors cards that were around when I was a kid, like I think of each one of them as an important individual that's a total weirdo. Like, my favorite one is called the orangefoot pimpleback pearly mussel, and it's really endangered. It's found in Kentucky and Tennessee. My coworkers one year, we were at work retreat and my birthday happened to fall that week. And they held a surprise party for me with the theme "endangered but not extinct freshwater mussels of Kentucky". And so they all dressed up as different mussels. There was a spectaclecase, and a sheepnose, and a snuffbox, and one of them dressed up as the orangefoot pimpleback pearly mussel, it was super fun.

BASCOMB: [LAUGHS] You are a wild and crazy bunch there at the Center for Biological Diversity!

CURRY: [LAUGHS] It was the best party ever.

BASCOMB: And freshwater mussels, do they serve the same function in the ecosystem as saltwater mussels? That is, you know, filtering the water?

CURRY: Yes. So just by breathing and feeding, freshwater mussels pull bacteria and algae and pollutants from the water column. And they take that material that wouldn't be food for other organisms, and they turn it into a food source, because lots of things like to eat freshwater mussels, including turtles and river otters. In fact, some of the endangered turtles in the Eastern US, when they worked to replenish the freshwater mussel populations and clean up the rivers, then the turtles bounced back as well, because they're such an important food source.

BASCOMB: So they really serve an important function, then, in their ecosystems. 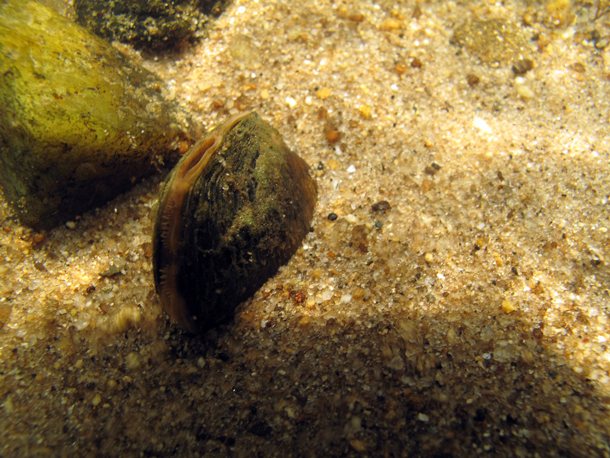 BASCOMB: And I would think being a filter feeder and filtering out the pollution in the water, as you mentioned, probably makes them pretty vulnerable.

CURRY: Absolutely. That's one of the biggest reasons that they're the most endangered group of organisms in the US. 70% of them are at risk of extinction and 38 have already been lost. So, they store the pollutants in their bodies. And also, early on, they were collected for use as buttons. So before there was plastic, there were these huge button factories that collected freshwater mussels to make buttons and jewelry and mother-of-pearl items. And so over-collection was an early threat. And then as that industry declined, we started damming all the rivers. And so dams have had terrible effects on freshwater mussels. And unfortunately, we're still fighting proposals for new dams in the Eastern US to this day, we haven't learned our lesson about them yet.

BASCOMB: I understand that they also have a pretty unique life cycle in the way that they reproduce. Can you tell me about that?

CURRY: Oh, my gosh, it's so cool. So there's a couple different strategies that mussels use. The rayed bean, which is one of the species that is going to get critical habitat, it makes this lure that sticks out of its little mussel shell and flaps its mantle around to attract very specific fish. So the rayed bean is trying to attract the rainbow darter or the Tippecanoe darter. These small fish, they swim up to it, and then it claps onto them and expels its fertilized eggs onto their gills. So the perfect little baby mussels develop on the fish's gills, and then the fish swims away and the mussels drop off somewhere. And, like, the snuffbox, it has to catch a fish called the common logperch to be able to reproduce. So all the mussels in the US are dependent on fish hosts except for one, the salamander mussel uses a big salamander called the mud puppy. But because of that intricate relationship, anything that threatens the fish hosts also threatens the mussels. And dams can separate mussels from their fish hosts.

BASCOMB: So what is the federal government doing to protect endangered freshwater mussels?

CURRY: Not enough. So even though they're the most endangered group of animals in the country, and a lot of them are protected under the Endangered Species Act, they just don't get the recovery money that they need. Some of them don't get any recovery money, some of them get less than $100 a year. So one of the positive things that has happened is Representative Grijalva, the Chairman of the House Natural Resources Committee, has introduced a bill called the Extinction Prevention Act of 2019. And this Act would designate funding to protect four really endangered groups of animals, including freshwater mussels. So it would give $5 million a year for five years specifically to freshwater mussel propagation and recovery. And that would be amazing because the technology exists to save these mussels. But there just isn't the funding.

BASCOMB: What's going on in the Trump administration in terms of mussel habitat protection?

CURRY: The Trump administration is working really hard to weaken every single aspect of the Endangered Species Act, from getting on the list, to recovery, to what critical habitat designation means. And so, one of the proposed changes that they're making to the Endangered Species Act would mean that for critical habitat to be considered to be adversely modified, so for a project to hurt the critical habitat, which they're not supposed to be allowed to do, they're changing the definition so that all of the critical habitat would have to be harmed by the project, and not just part of it. And for these mussels that occur across the Eastern US, that would basically mean that a meteor would have to wipe out the eastern half of the United States before it would adversely modify their habitat. So any projects, like putting a pipeline across a river, is going to create a ton of sediment and the risk of a chemical spill. Not a good idea. But under the Trump administration definition of adverse modification, the pipeline would have to pollute all of their rivers at the same time and not just one of their rivers. 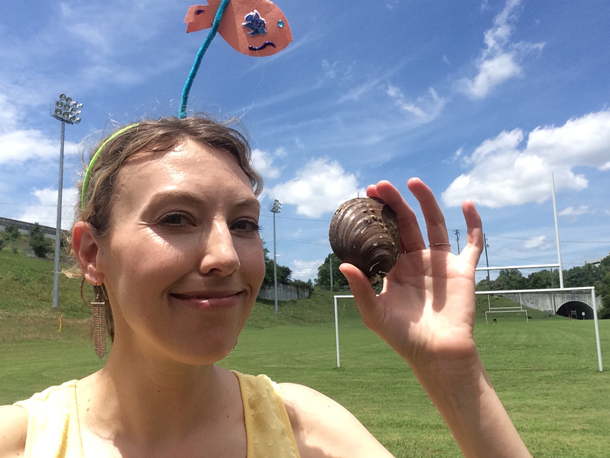 BASCOMB: Well, what can our listeners do to help these little bivalves?

CURRY: Anything that people can do to help keep the water clean around them, like using less pesticides, less fertilizers; planting trees along streams so that dirt from projects doesn't run into the stream, reporting that sort of thing. Everything that helps clean water is going to help the mussels. And climate change is one of the biggest growing threats to freshwater mussels because the young mussels have very specific temperature limits. And so as rivers become warmer, and as drought affects areas, the mussels won't be able to reproduce. And that's another way that people can help save them, is taking action to address the climate catastrophe.

BASCOMB: Tierra Curry is a senior scientist with the Center for Biological Diversity. Tierra, thank you so much for taking the time to talk about mussels with me.

CURRY: Thanks so much, Bobby.

WATCH: “The Fascinating and Endangered Sex Lives of Freshwater Mussels”

WATCH: The natural fish lure of the lampsilis mussel

Tierra recommends: “Immersion: The Science and Mystery of Freshwater Mussels”