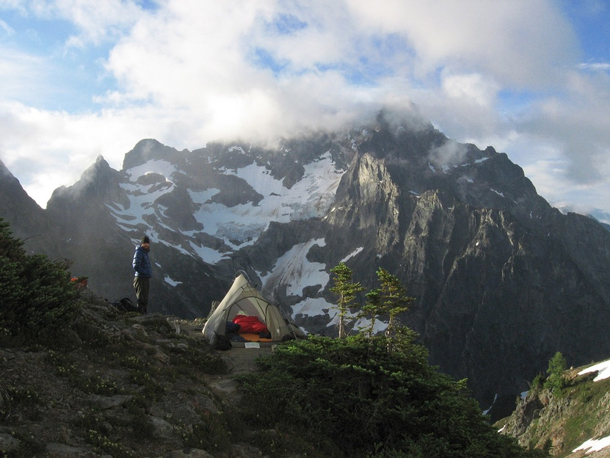 [MUSIC: Sharon Jones & the Dap-Kings, "This Land is Your Land" on Naturally, Daptone Recording Co]

CURWOOD: As part of our occasional series on US public lands, this week we bring you a national park from Washington State: The North Cascades.

CURWOOD: An owl joins a chorus of other birds at Big Beaver Valley in the northern end of the park. The North Cascades is one of the least visited of the US National Parks. Perhaps names like Mount Fury, Poltergeist Pinnacle, and Forbidden Peak keep the crowds at bay. But despite its name, the beauty of Desolation Peak has captured many hearts, including that of the beat poet Jack Kerouac and more recently, Saul Weisberg, founder and executive director of the North Cascades Institute. He joins us now from Bellingham, Washington. Saul, welcome to Living on Earth!

WEISBERG: Thanks. Thanks for having me.

CURWOOD: So for someone who's never been to North Cascades National Park, how would you describe it?

WEISBERG: Well, tucked away in northwest Washington is this amazing place of jagged mountains, glaciers, mighty rivers, big trees, incredible wildflower meadows. It's just, it's a special place. It's what the Northwest used to look like: big cedar, hemlock, Douglas-fir forests. And there's not a lot of it left and some of the best of it's left inside of, deep inside of North Cascades National Park.

CURWOOD: So the North Cascades National Park is one of only three national parks in the United States that we share some territory with Canada. There's Voyageurs, which is up in the Boundary Waters area there in Minnesota, there's Glacier National Park, and North Cascades. What makes North Cascades different from those parks?

WEISBERG: Well, one of the things that's unique about the park is that it's in the midst of this huge, wild ecosystem. And that ecosystem stretches, in northwestern Washington, it covers about 70 miles east to west long the Canadian border. The ecosystem is about 13 million acres, 7 million of the acres of that are protected public lands on both sides of the border: North Cascades National Park, three national forests, and then provincial parks in BC. And the park itself is only about six or 700,000 acres, but it's really the heart of that wild ecosystem. So it's the largest area of protected public lands across the whole US-Canada border. Very few roads go into the park itself. You have to get off on the trail, you have to climb or canoe the rivers to really get into that. And some people, climbers in particular, will access the park coming in from the north, driving around, and then hiking in through British Columbia. 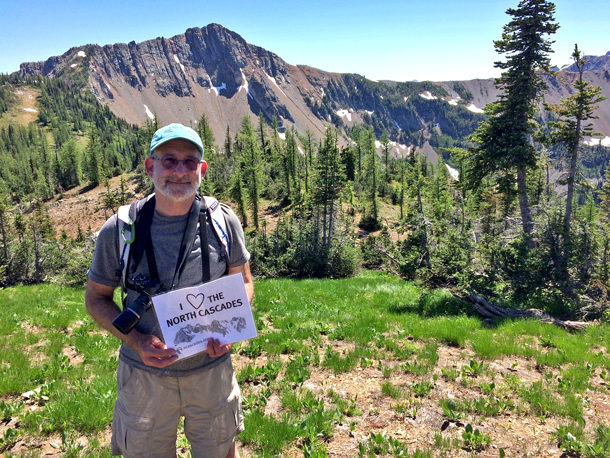 CURWOOD: As I understand it, North Cascades is one of the least visited of our national parks. Why do you suppose not so many people come to North Cascades?

WEISBERG: Well, part of it's the obvious answer that it's more remote. It takes more time to get to. When you're in downtown Seattle, you can see Mount Rainier and you can see the Olympics across Puget Sound. You don't see the North Cascades until you get north. And I've had people tell me well, North Cascades, that's somewhere up near Alaska, isn't it? And these are folks in Seattle who could get there in three hours. That's part of it. The other part of the low visitation is sort of an artifact of boundaries. The park complex itself is made up of the National Park, Ross Lake National Recreation Area, and the Lake Chelan recreation area. And most of the visitors are in those two recreation areas, which hug the lakes and the one highway that crosses the range. And to get in the park, you've got to get off that road. And I think there's still only, aside from the main highway, I think there's only six miles of paved road in the park. I could have that wrong, but it means that you've got to work to get into the park itself.

CURWOOD: Indeed. Now, when it comes to glaciers, of course, Glacier National Park is famous for glaciers, but the North Cascades, I gather -- you know, you have more.

WEISBERG: A lot more. Yeah. Over 300 active glaciers. Like all the glaciers, they're shrinking, some more rapidly than others. I was a climbing ranger in the park from 1979 to 1986, and you can see the difference pretty much everywhere you look. By late summer, areas that were glaciated now have just summer snowpack. There's areas where, in the early to mid 80s, where we would go into someplace and we would find, instead of a glacier, we would find a valley with a lake in it. And so it's been happening for a while, but it's really been accelerating recently. And we've seen the same thing in terms of wildlife where marmots and pikas are going up in elevation. And at some point those species, as the glaciers leave and the climate warms, essentially fall off the top of the mountains; they, there's no place for them to go because they are dependent upon snowpack for their livelihood. 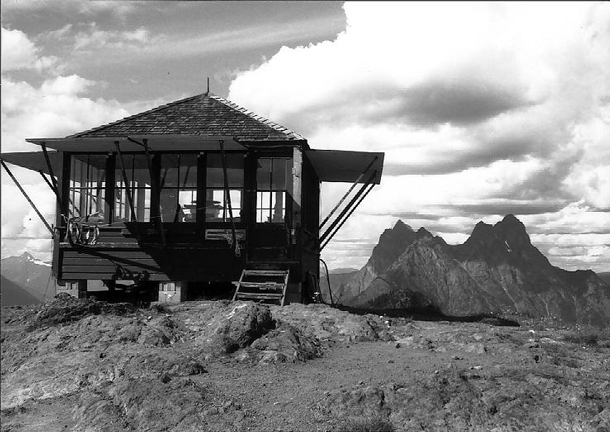 CURWOOD: So talk to me about your favorite places in the park. You're a climber, so I imagine there's some really steep mountains. But, but tell me, what are, what are your favorite parts there?

WEISBERG: I've never been to a place that didn't speak to me in some way if I spent enough time there. But I must admit that the Picket Range, which is some of the most rugged, most alpine, steep, scariest part of the mountains is a particular favorite. It's one of those places where you'd plot your route, usually spend a day or two just hiking to get up into the mountains. So you'd be hiking up deep, low-elevation valleys. And then you'd camp and you'd be looking at the route ahead through binoculars and just go, there's no way. It looks like, it looks like you're looking at the Gates of Mordor. And I just love that, a wilderness that is that wild and makes you feel that small.

CURWOOD: Well, the North Cascades National Park has some pretty foreboding names to it. You've got Desolation, Despair, Fury; what's with all the doom and gloom?

WEISBERG: Yeah, and you left out Torment and a few others. It shows you how the early white settlers and miners and trappers saw the place. For the native peoples it was home. But to the people who came in there and overwintered for the first time, it was a foreboding place. The days are short; in the valleys you might never see direct sunlight in the winter, because it's just creeping along behind the mountains. And it's cold. And there's a tremendous amount of rainfall. And so it just wasn't a happy place for folks who hadn't lived there for a long time. And it's interesting because a place like Desolation Peak, which is very hard to access most of the year when there's a lot of snow there -- in the summer, it's a beautiful, open, gorgeous forest with lush meadows of wildflowers, I mean, it's a heavenly place to camp. 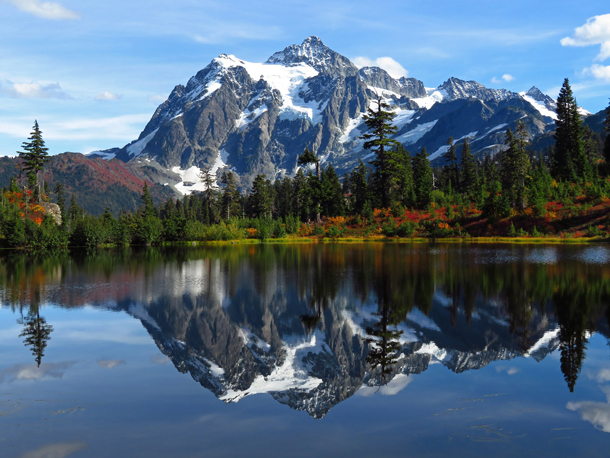 CURWOOD: Now, Jack Kerouac famously spent a couple of months camped out at Desolation Peak, calling the landscape one of the most beautiful he'd ever seen. Now you yourself have studied Kerouac and other poets, Beat poets, nature poets. In fact, you do poetry yourself. So how does poetry help you connect to the park?

WEISBERG: Poetry is how I slow down and pay attention. So when I'm hiking, I've always got a small notebook in my pocket, and I'm just jotting down an image or a thought. I call them field notes. And then gradually, over time, they kind of build and some build themselves into poems, and some never do. But it's, I often find myself, when I'm out, looking out either at a spectacular landscape, or maybe deep in the forest, just watching the raindrops cling to the branches and listen to the nuthatches in the trees. But it slows me down and makes me feel that I'm there.

CURWOOD: Saul, to wrap things up, we'd love to hear one of your poems from your collection. It's called "Headwaters." Please, if you could read that for us now.

WEISBERG: "Headwaters." With cupped hands, I bow and drink / Each day, a different stream / Many times from the same river / And once, the sea.

CURWOOD: Well, we certainly are all connected, aren't we? Saul Weisberg is founder and executive director of the North Cascades Institute, and perhaps you could call him the super docent of North Cascades National Park. Saul, thanks so much for taking time with us today.

WEISBERG: Well, thank you. It's been a pleasure to talk about one of my favorite places.