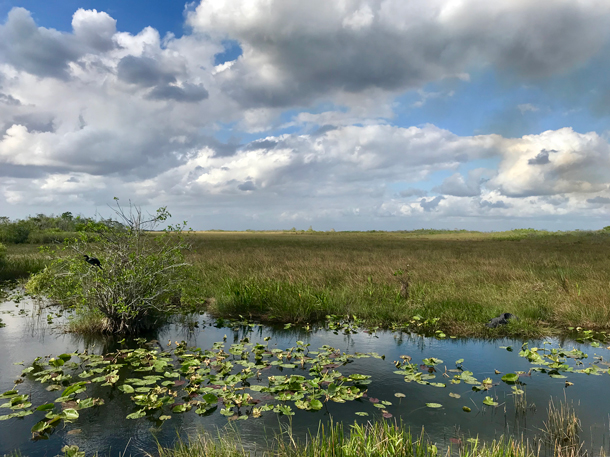 Established as a national park in 1934 and a UNESCO World Heritage site in 1979, Everglades National Park is much more than a mere swamp. Only an hour’s drive west from bustling Miami, the 1.5 million acres of the Everglades provides a place of sanctuary in nature for those looking for peace and quiet, as well as a front-row-seat view of wildlife from anhingas to alligators. Living on Earth’s Lizz Malloy went to check out the “River of Grass.”

MALLOY: Miami, Florida. It brings some immediate images to mind, often involving beaches, parties, and glamour. From the tourist packed Ocean Drive, the bustling streets of Brickell, to the music filled air of Calle Ocho in Little Havana. Even if you are on vacation, in Miami it seems like there is no time to relax.

MALLOY: Many looking for a bit of peace and quiet from the never-ending party that is South Beach head south towards the keys.

MALLOY: But, there is a sanctuary just an hour west of Miami. The vast and peaceful wilderness of Everglades National Park. 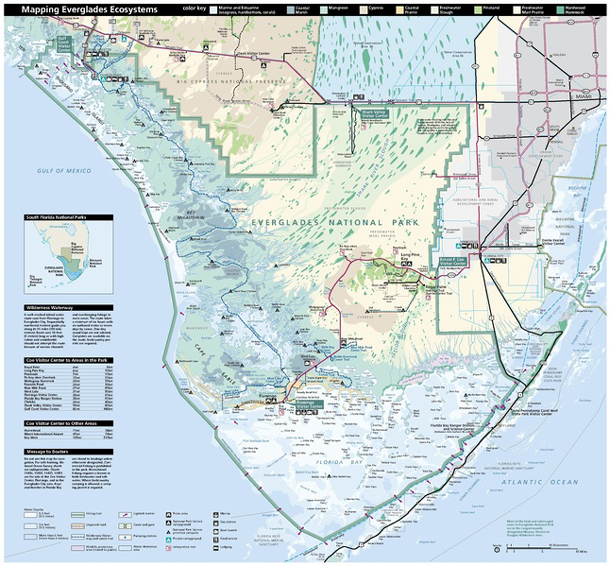 MALLOY: As I drive west towards the national park the electricity of Miami dwindles and the skyscrapers fade away. The air softens as the sounds emerging from the open windows change from beeping horns to birds.

MALLOY: There is a visitor center not too far into the park where I am going to meet my guide who will introduce me to many of the exciting species of the everglades.

KOMINOSKI: My name is John Kominoski and I'm an associate professor at Florida International University in Miami. I'm an ecosystem ecologist and I've been studying the Everglades for the past seven to eight years. 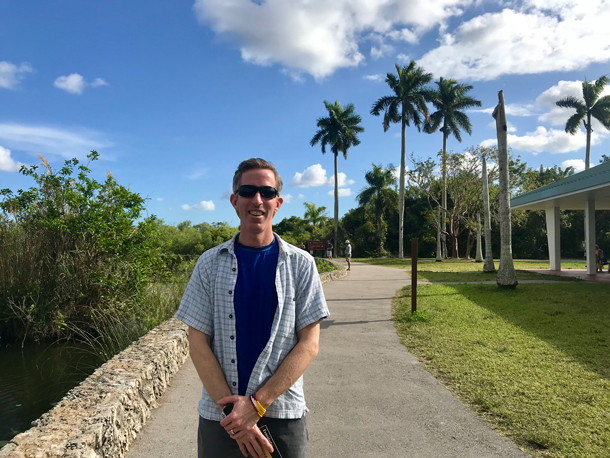 John Kominoski is an Associate Professor and ecosystem ecologist in the Department of Biological Sciences at Florida International University in Miami. His research focuses on organic matter processing at the interface of terrestrial and aquatic ecosystems and is part of the Florida Coastal Everglades Long Term Ecological Research. (Photo: Lizz Malloy)

MALLOY: John sports an excited smile and long khaki pants, despite the 82-degree weather. He describes the Everglades as a mosaic of habitats and that nothing like it can be found anywhere else in North America. Soon we embark on a journey to one of John’s recommended trails. Dense carpets of grasses extend toward the sky on either side of the road.

KOMINOSKI: It looks like a prairie. It doesn't look like a typical wetland that people are familiar with. When you're on the ground, you can't really see these open water habitats. And you would probably assume that the whole area was dry. 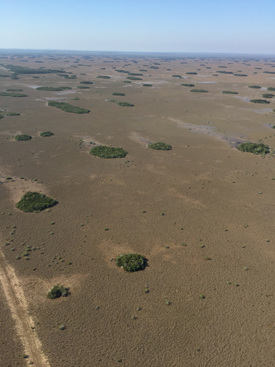 MALLOY: From the mid 1800’s to the mid 1900’s there were constant efforts to develop the Everglades because it was seen as useless land. It wasn’t until Marjory Stoneman Douglas wrote The Everglades: River of Grass in 1947 that people began to recognize the Everglades as the rare ecological jewel that it is.

KOMINOSKI: Okay! So, here we are at Royal Palm. Also known as Anhinga Trail and Gumbo Limbo Trail.

MALLOY: John heads through the trail entrance past massive banyan trees enveloped by strangler figs that look like they are made of dripping wax.

KOMINOSKI: There's always water here because it's a canal essentially. So this is a great place for people to come to see alligators to see fish and hear fish, and birds and frogs and all that. So, we've got the double crested cormorant that's resting there on that dead branch. And we've got -- red, the red bark tree is gumbo limbo, as in the gumbo limbo trail. It's also called the tourists tree because it's red and peel-y [LAUGHS].

MALLOY: Along the other side of the trail is a sea of grasses that extends towards the sky, meshing greens, golds, and blues. Speckling the sawgrasses and invasive cattails are a variety of birds that don't seem to mind our company. 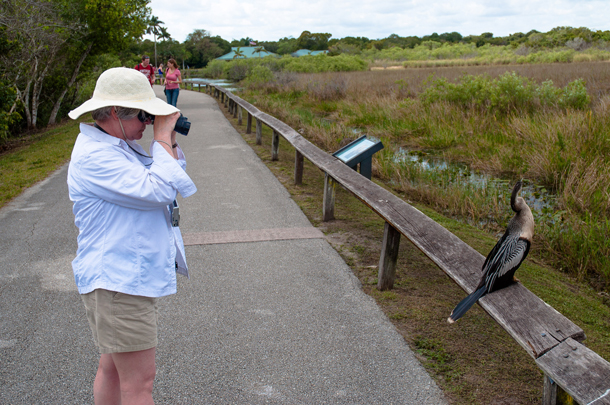 The native Anhinga is not easily bothered by tourists in the park. (Photo: alans1948, Flickr CC BY 2.0)

MALLOY: A native diving bird called the anhinga suns its wings on a railing as a group of visitors look on and angle for photos. Unlike other water birds, such as ducks, anhingas don't have oil on their feathers to keep them dry when dive in the water for their prey. This helps them weigh their bodies down so they can dive deeper, but to dry off it takes a little bit of time and some sunbathing.

KOMINOSKI: Should we walk down to the end of the trail…?

MALLOY: This trail is full of excited visitors pointing and smiling at all the different wildlife that surrounds them.

KOMINOSKI: Okay, so here's our first alligator and whoa! Active!

MALLOY: An alligator, some 6 feet long, jumps in the canal about five feet in front of us behind the trail railing and scoops up a baby alligator in its mouth like a snack.

KOMINOSKI: So, this is definitely a female. And, it's possible that that jump that she made was to protect her baby. Wow. That is really special. 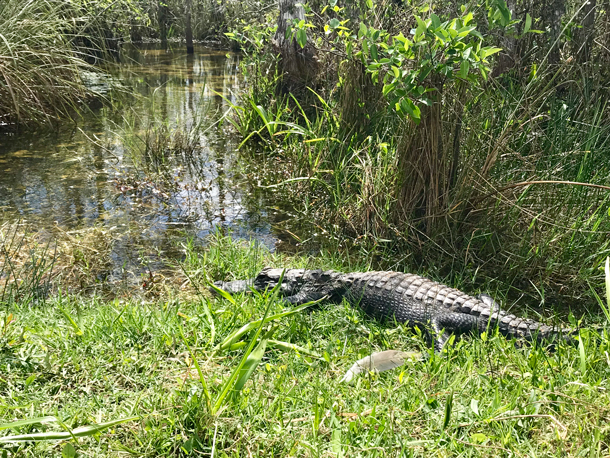 The American Alligator is an abundant species in the Everglades. (Photo: Lizz Malloy)

KOMINOSKI: Yeah, she's definitely protecting that little one. Beautiful. This is kind of one of the beautiful, unique experiences you get when you're out in the Everglades.

MALLOY: Female alligators are protective mothers, who will sometimes keep their babies in their mouths to protect them from predators, like other alligators or even some birds. When they hear their babies making their distress call…

MALLOY: ... the mother alligators go into full defense mode. But, I suppose that we aren't much of a threat because soon she lets her baby swim free from her jaws. 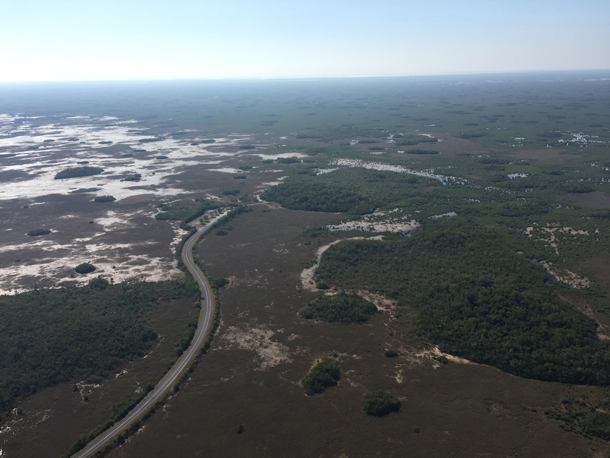 MALLOY: I rent a kayak at the visitor center.

MALLOY: And paddle through the waters that are the lifeblood of the Everglades. Thrilled to be drifting past lumbering manatees and sun-bathing crocodiles. I feel like the star of my own nature documentary. 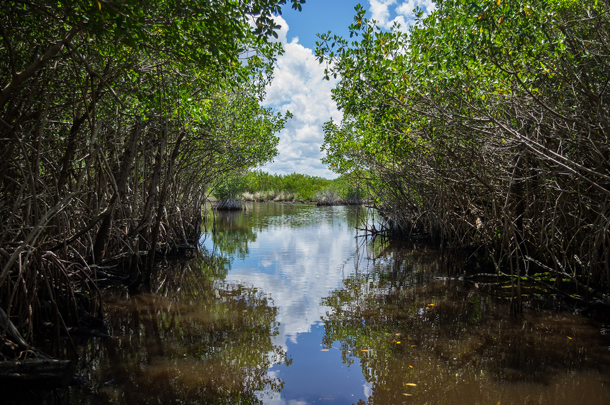 MALLOY: I can easily see why my guide John Kominoski loves this national park.

KOMINOSKI: You don't have to be a scientist to appreciate and want to protect the everglades. I think you just have to be somebody that wants to connect with yourself and with nature in a place that is experiencing a lot of change and may not be here for as much time as we hope it will be.

MALLOY: And change here means sea level rise, development, and climate change, which all threaten this delicate ecosystem. But, drifting along with the manatees, all that seems a million miles away. 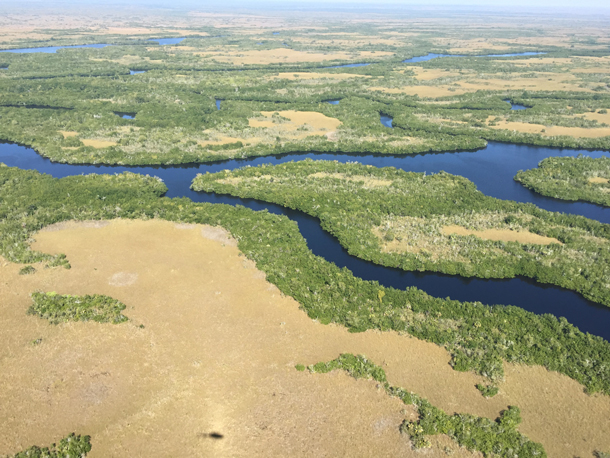 The Everglades National Park, although only half of its original size, covers 1.5 million acres. (Photo: John Kominoski)

MALLOY: For Living on Earth, I’m Lizz Malloy in the Everglades National Park.


More information about the Everglades

About Marjory Stoneman Douglas, author of "River of Grass"