BirdNote®: How a Bird Came to Look Like a Caterpillar 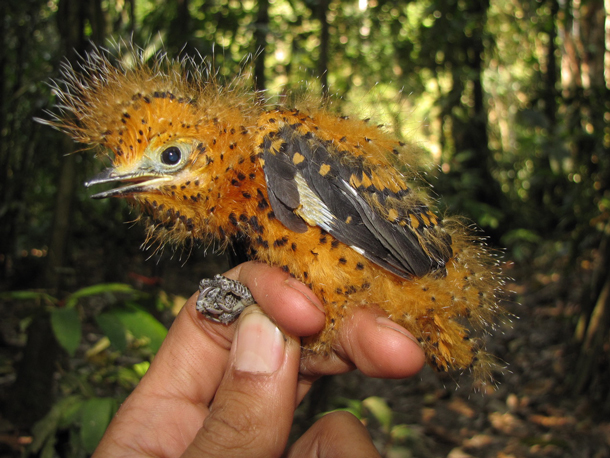 The Cinereous Mourner (Laniocera hypopyrra) is a quintessential example of Batesian mimicry, the disguise that some harmless creatures adopt in order to trick would-be predators into thinking they’re dangerous. (Photo: © David R. Santiago)

The Amazon rainforest is home to a wide array of fantastically-attired species. Among them is a bird whose chick, incredibly, looks like a caterpillar! BirdNote’s Michael Stein explains how evolution has driven a phenomenon called Batesian mimicry, in which certain species try to trick their would-be predators into thinking they’d make for a dangerous meal.

CURWOOD: The unique evolutionary pressures of life in the Amazon rainforest
have spawned an incredible array of fabulously-attired animals. BirdNote’s Michael Stein tells us about a colorful bird that evolved to mimic… a caterpillar.

BirdNote®
How a Bird Came to Look Like a Caterpillar

STEIN: In nature, one way to avoid being eaten is to look like something you’re not—ideally, something that tastes really awful — or that might even kill you.

Science calls this Batesian mimicry, named for a 19th century naturalist. Bates found that some perfectly edible butterflies had evolved color patterns that mimic those of toxic butterflies, which predators avoid.

Well, these butterflies are not alone.

The Cinereous Mourner is a small, ashy-gray bird that lives in the forest understory of the Amazon Basin. And it’s taking mimicry to the next level: its chick looks like a poisonous caterpillar!

The chick is covered in vivid orange feathers punctuated with black dots. Lying alone in its cup-shaped nest, it’s a near match to a highly toxic caterpillar — one that snakes and monkeys won’t eat. The chick even waves its head like a caterpillar, increasing the illusion.

Cinereous Mourners live in an area where many birds’ nestlings are routinely lost to predators—and this may explain how a bird wound up dressed as a deadly caterpillar.

CURWOOD: For pictures, fly on over to our website, loe.org.

More about the Cinereous Mourner from the Cornell Lab of Ornithology