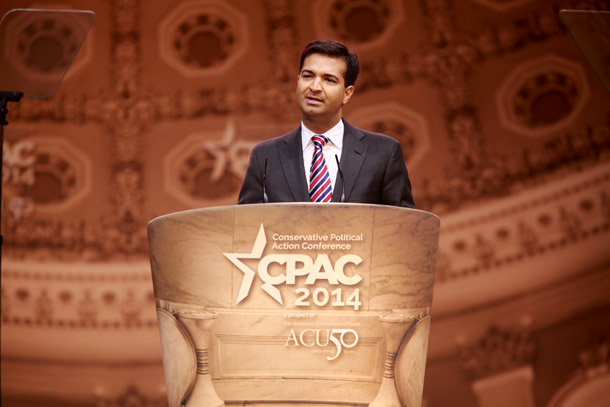 On July 23rd, Republican Congressman Carlos Curbelo of Florida introduced the Market Choice Act, a carbon tax proposal to help fight climate change with a “tax swap.” The bill would exchange the gasoline tax for a $24 tax per ton of CO2 or equivalent amount of greenhouse gas emitted, which would increase over time. Former South Carolina Representative Bob Inglis is a Republican who was unseated after he introduced a carbon tax proposal of his own 10 years ago. Congressman Inglis spoke with Host Bobby Bascomb about how his fellow conservatives are responding to Rep. Curbelo’s bill and the infrastructure and climate adaptation strategies that the tax could help fund.

For the first time in a decade a Republican member of Congress has introduced legislation to address carbon dioxide emissions. Representative Carlos Curbelo of Florida introduced a bill called the Market Choice Act. It would impose a tax of $24 dollars per ton on greenhouse gas emissions from oil refineries, coal mines, and natural gas processing plants. The tax will increase by 2 percent annually plus inflation. Representative Curbelo unveiled his plan at the National Press Club.

CURBELO: At this time of deep political division and, at least some days, political chaos, I am offering this big, sober solution to address some of our country’s greatest challenges.

BASCOMB: Estimates suggest the carbon tax will raise one trillion dollars over the next decade with the bulk of that money going towards infrastructure improvements, something both Republicans and Democrats have said they support. Representative Curbelo acknowledged that a carbon tax might be a tough sell for some of his GOP colleagues, but he says it beats the alternative.

CURBELO: I remind my conservative colleagues who often decry our nation’s growing debt: saddling young Americans with a crushing environmental debt – meaning an unhealthy planet where life is less viable – is at least as immoral as leaving behind an unsustainable fiscal debt. Already my constituents in South Florida are experiencing the effects of higher sea levels with chronic coastal flooding and salt water intrusion in the Everglades, which threatens our drinking water supply.

BASCOMB: For more on the carbon tax proposal we turn now to former House Representative Bob Inglis. He’s the director of the free-market environmental organization, RepublicEn.

Welcome back to Living on Earth!

INGLIS: Great to be with you. Thanks.

BASCOMB: So, what would the Market Choice actually do in terms of net carbon dioxide emissions? What are the estimates right now?

INGLIS: Dramatic reduction sufficient to meet – or exceed actually – our Paris commitments, and so it's pretty exciting really. According to a Columbia University study, as this tax increases, it’d be at $50 dollars per ton – it would slash emissions by 39 percent by 2030.

BASCOMB: So, what other regulations or laws might be changed or replaced if Mr. Curbelo's proposal is adopted? 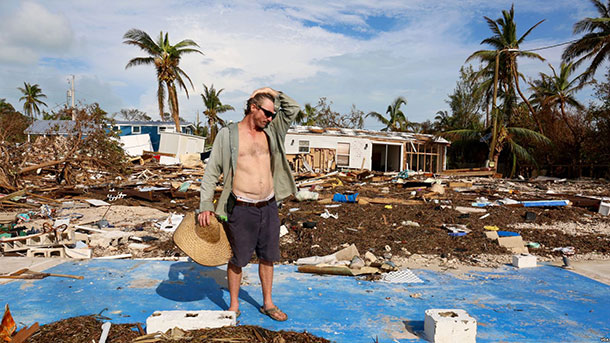 South Florida is already feeling the effects of climate change. In 2017, the area was hit by Hurricane Irma, which devastated homes in areas including the Florida Keys. (Photo: Voice of America (VOA), Wikimedia commons, public domain)

BASCOMB: So, oil companies, coal mines, things like that, they're going to start paying more to produce their product and find better ways to produce it. That's basically the idea?

INGLIS: That's right. This would be an upstream application of the tax. That means that it's a very simple job for the IRS. There are only about 2,000 companies in America that either mine coal or put stuff in a pipeline, and so, very simple job for the IRS and simple for us as consumers. We do see the price go up to the true cost of energy. It's not going up artificially, it's going up to the truer cost, and once we see that it behooves us to turn the thermostat down or to insulate better or to get an electric car, do something like that.

BASCOMB: Well, how much money will be generated by the carbon tax, and how will it be spent? I understand infrastructure is a large part of it.

INGLIS: Yeah, it's going to generate a great deal of money. We're looking at nearly a trillion dollars. Seventy percent of it would go to the highway trust fund, and so this is a good thing if you're interested in infrastructure, which is really a key point about the Curbelo bill is that it's a very innovative creative way of dealing with several problems all at once. There seems to be an appetite in the country for infrastructure improvements – roads, bridges, airports – but there's no money for it. So, it also funds some adaptations that are necessary in places like Carlos Curbelos' Miami, which are dealing with climate change and need to put up some sea walls and install some pumps.

BASCOMB: Well, how have the various stakeholders responded to the proposed tax? I'm thinking specifically of oil and gas companies and environmental groups.

INGLIS: Thankfully, the Nature Conservancy is full-throatedly endorsed the bill, and that's pretty exciting. That's a very credible group that cares about the environment we live in. As to oil companies, it depends on your portfolio. If you are in the Petroleum Marketing Association of America and all you've got to sell is petroleum, you're probably really opposed to this bill because you really don't want a carbon tax. But if you're ExxonMobil and you've got a large portfolio of natural gas, then a $24 dollar per ton price on carbon dioxide would result in you selling a lot more natural gas and beating coal better than you're beating it now for electrical generation. And so, where you sit determines where you stand in politics and in business. What your portfolio looks like determines where you stand.

BASCOMB: Now, what about where Republicans are sitting? Most Republicans seem to have a knee-jerk reaction when they hear the word "tax" and just say no.

INGLIS: Yes, so far that has been the reaction. What we're trying to convince conservatives of at republicEn.org is that it's a tax swap we're talking about here in a bill like Carlos Curbelo's or in other proposals like from Citizens’ Climate Lobby. These are bills where we're swapping the taxes. Yes, we're putting in a new tax called a carbon tax, but we’re – in Carlos' case – eliminating the gas tax, and in the Citizens’ Climate Lobby case you would be returning the money in the form of a dividend. So, these proposals are not like the villain of a carbon tax that some Republicans have been seeing under the bed at night. I think it's because there's been some gremlins around from various groups that see no way to innovate in their business, and so they're making all kinds of scary noises that are being emitted from underneath the bed. But if we turn on the lights, what we'd see is a revenue-neutral border-adjustable carbon tax. That means – revenue neutral means you cut taxes somewhere else or you dividend the money back or you eliminate the gas tax. And border adjustable means you apply it to imports so that you get China and rest of the world in on the deal.

BASCOMB: Well, just a few days before Representative Curbelo unveiled his plan, 222 of his GOP colleagues voted in favor of a resolution that said any kind of tax on carbon would be detrimental to the United States economy, and only six Republicans voted against that resolution. So, what are the odds, do you think, that Representative Curbelo's proposal will get any Republican support? 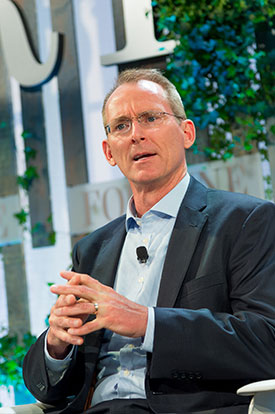 INGLIS: Yes, so the Scalise resolution is that focus on the ‘gremlins under the bed’ kind of situation. It was a resolution where Steve Scalise said oh, there is this is terrible villainous carbon tax lurking out there that would increase the size of government that would destroy American competitiveness. Well, given that description, if I were still in Congress, I might have voted for it myself, and then gone on to explain that, but here's the real carbon tax that people are talking about, it’s a tax swap. So, six Republicans in the Climate Solutions Caucus chose to vote against the Scalise resolution, I think to call it out as silly. So, now they've got to explain to some constituents why it is that they wouldn’t have tried to stop that villain of a carbon tax, but that villain doesn't exist, is what their explanation will be. The really – the more complicated explanation, I think, is the Republicans who are members of the Climate Solutions Caucus who voted with Steve Scalise and who have yet to take action on climate change. It means that you've got to come forward with some solutions. If you don't like the carbon tax as Steve Scalise described it – and frankly who would – then come forward with one that is acceptable.

BASCOMB: So, at the end of the day here, what are the odds, do you think, that the Market Choice Act might actually get some traction and go anywhere in this highly partisan Congress that we have right now?

INGLIS: It's still early. I wouldn't expect action in this Congress. I think it's going to take a while, but the great thing is that Carlos Curbelo is a young smart conservative, and if you're young and smart and conservative, you're for action on climate change. And if you're Carlos Curbelo and you represent Miami – which has a problem with sea level rise – has come forward with an idea. And so that's where the process starts and I think we're really more at the starting line than at the finish line, but we're very excited about the starts. It’s the first time in about a decade that a Republican has introduced a proposal to deal with climate change.

BASCOMB: And the last time a Republican introduced a proposal to deal with climate change was you about a decade ago.

INGLIS: Well, yeah, let’s not mention that. That didn't go too well, but that was in the midst of the Great Recession though, probably not the best time to be talking about a carbon tax even if it is revenue-neutral and border-adjustable. But the economy is much better now. We’ve had more experience with climate change. The capacity of the eco-right, as we call it, to help explain this to constituents in groups like ours at republicEn.org is far greater in 2018 than it was in 2009. And it's also true, I think, that President Trump's intended withdrawal from Paris means that there's a discomfort, an unease about – I mean, we're going to do nothing about climate change, nothing at all? And that unease will actually help advance this conversation because people will be saying, wait a minute now. We want to do something about climate change, and maybe a tax swap like Carlos Curbelo is proposing might just work.

BASCOMB: Bob Inglis is director of the free-market environmental organization, RepublicEn. Thank you so much for joining me.

INGLIS: Great to be with you. Thanks.