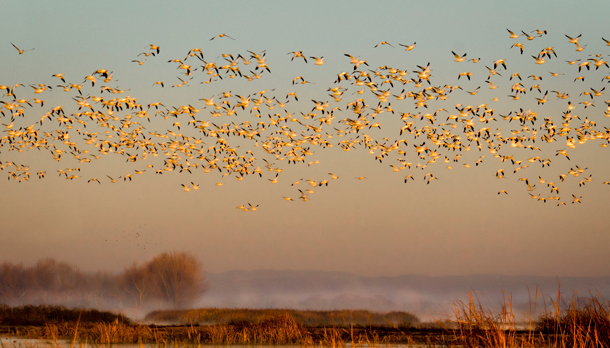 April 2018 was the coldest and snowiest April on record for much of North America. That spelled trouble for migrating birds who arrived in the north expecting to bulk up on the spring emergence of bugs and found 2 feet of snow instead. Host Steve Curwood talks with Cornell Lab of Ornithology’s Andrew Farnsworth about climate volatility and how unseasonably cold spring weather challenges migrating birds.

CURWOOD: From PRI, and the Jennifer and Ted Stanley Studios at the University of Massachusetts, Boston, this is Living on Earth. I’m Steve Curwood. Migrating songbirds have finally found the springtime weather in North America they need to survive and thrive, but only a couple of weeks ago they had to fight unusual cold and deep snows in the Northern states. It’s all part of climate disruption, with many heightened gyrations of wet and dry, cold and warm around the world that worry bird experts like Andrew Farnsworth. He’s a research associate at the Cornell Lab of Ornithology and says this Spring, most long-distance avian travelers felt the effects of extreme weather. That includes one of my favorite migrating birds, the Scarlet Tanager.

FARNSWORTH: So, Scarlet Tanager is a really cool, quite long-distance migrant. So, that's a bird that spends most of its life in the tropics. They're breeding in the US for a pretty short period of time, but this is a bird that's traveling one way, certainly several thousand kilometers. They're also flying across the Gulf of Mexico. They're one of these birds we call trans-Gulf migrants. Males are brilliant scarlet red with black wings, and certainly a bird that many many birders are hopeful to see every spring.

CURWOOD: So, how does this unusual cold and snowy spring...how has that affected migrating birds in those areas that have been fairly frosty?

FARNSWORTH: Birds, they're arriving to an area where the expectation is, “I’m going to be able to forage and find insects easily,” and to arrive at a place like that and find two and a half feet of snow obviously could pose major problems for finding food and sort of maintaining energy and fuel resources to continue migrating further.

CURWOOD: How fatal is this business of having snow on the ground in these places? 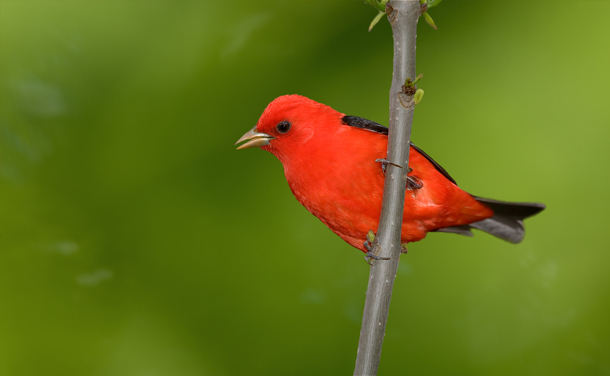 The scarlet tanager migrates across the Gulf of Mexico each year. (Photo: Wikimedia Commons)

FARNSWORTH: It can be quite fatal. It may be that perhaps if conditions are not so horrible that birds are able to bounce back and perhaps it just means a slight decrease in productivity, maybe not all individuals are able to produce young that year. But in severe cases like this year – or what seem like severe cases – where the cold is pervasive and the snow is pervasive, that could be a major hit to the population.

CURWOOD: Now I spend a fair amount of time in the Northeast where black flies are really annoying and mosquitoes are, you know, itch-provoking, and I have to remind myself that this is bird food so that I should be happy that these insects are there. Talk to me about the relationship between migrating birds and the spring insect emergence.

FARNSWORTH: The idea is that the timing of migration relative to that explosion of insects is going to have some direct connection to how successful you are as an individual. So, as an individual bird arriving to to some place where there are black flies everywhere, you can produce a lot of young and something about your timing of migration and where you go is genetic. Obviously producing more young that do the same thing, you're going to be able to take advantage in theory of that same flush of insects, assuming it happens at the same time every year.

Now, if it's changing, if it starts to shift because it's an extremely cold winter and the spring is cold and the ground is frozen and the black flies aren't emerging, then maybe you have a potential serious problem in terms of the timing of your arrival, in terms of when the insects actually come out. And the converse can be true too. If it's an extremely warm spring and the insects come out early before you arrive, well, maybe you're in trouble because all of the earlier arriving birds actually get the better territories. They produce more offspring, and then that sort of earlier arrival timing is something that – that is part of the gene pool, so to speak.

CURWOOD: With climate disruption we're seeing more climate volatility, I guess sort of in general Spring is coming earlier but there are these wide swings in Spring in a year like this one, Winter stays way too long. How are birds going to be able to adapt to that?

FARNSWORTH: One of the ways that birds can adapt to that is this thinking about is the population of individuals for a given species let's say large enough to have significant variation in the timing of arrival to where birds are going to breed. The population scale of hundreds, thousands, millions of individuals ... do you have enough variation there in that group to deal with these kinds of extremes? For some species that's certainly the case. The issue is, increasingly given all of these other kinds of insults or injuries to bird populations, in particular migrant populations, populations are declining so that variability is declining too, and when you have that kind of a situation with rapid fluctuations in climate, that's where you could potentially have real problems. 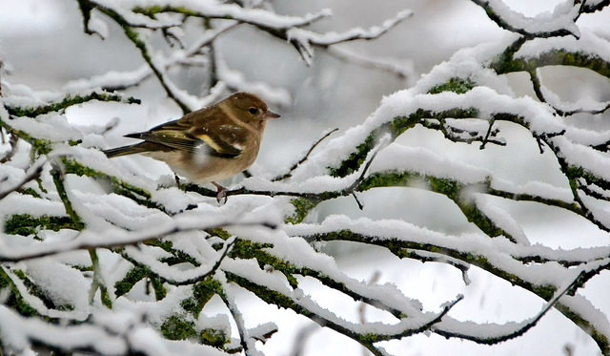 CURWOOD: Looking at songbird populations in North America, how are they today compared to 20, 50 years ago?

FARNSWORTH: Populations of songbird migrants are generally quite challenged at the moment. There are some estimates out there for certain species that maybe you know 40, 50, 60, 80 percent or more of the population decline in the last several decades, and there are a number of reasons for this. Loss of habitat in North America when birds are breeding, loss of habitat in Central and South America and the Caribbean. Cats, collisions with buildings, collisions with cars and power lines and wind turbines. So, not only are these factors that are kind of responsible for mortality increasing and prevalent in many places along their journeys, but then obviously dealing with these rapid changes and in climate it sets up a really challenging scenario for migrating individuals and populations of birds that migrate.

CURWOOD: Now, as I understand it, the Trump administration making changes to the American Migratory Bird Treaty Act, those changes are adding another hurdle for birds. Can you tell me about that?

FARNSWORTH: Yes, so this is the 100-year anniversary of the Migratory Bird Treaty Act and one of the big issues now is the Trump administration basically removing a number of protections this act put in place to protect birds against some sources of mortality like open oil pits, various kinds of activities by the energy industry that in the past under the Migratory Bird Treaty Act were able to be held accountable for. So, basically there were some teeth in the Act that could allow for some sort of legal action. The Trump administration has effectively gutted the portion of the Migratory Bird Treaty Act. In doing so, I think opened up these migratory populations to a potentially tremendous amount of additional hazard.

CURWOOD: So, what can people do who are concerned and want to help birds out? 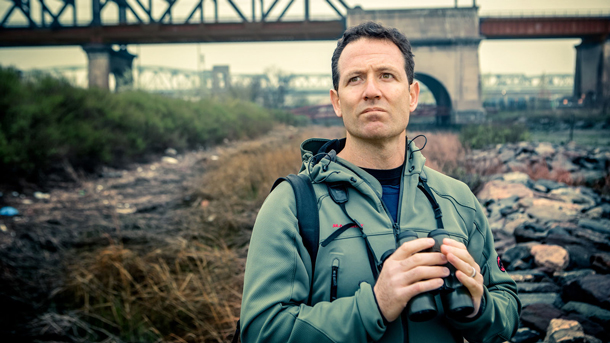 FARNSWORTH: In the case of the Migratory Bird Treaty Act you can be politically active and you can go out and vote. Even behaving locally, you can advocate to keep cats indoors, feeding birds, in particular, times like this, in the Midwest, for example, when there is so much snow left and not many insects around. There's no question that supplementing birds' food can help. There are tangible tractable things you can do every day and then there are kind of the grander human population level changes that both can happen.

CURWOOD: Andrew Farnsworth is a Research Associate at the Cornell Lab of Ornithology. Andrew thanks so much for taking the time with us today.

FARNSWORTH: Thank you so much for having me. Really appreciate the time.

All About Birds: About the Scarlet Tanager

The Wildlife Society: Migrating birds are getting more out of sync with the environment