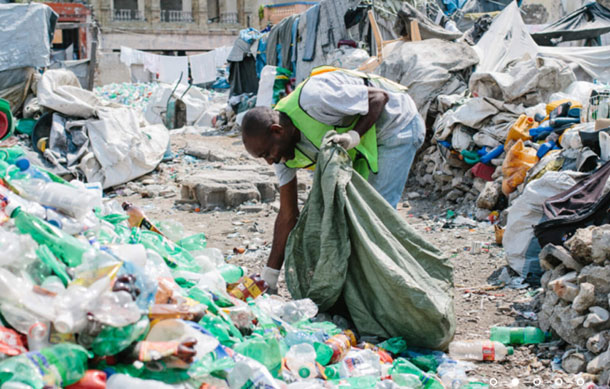 There are roughly 5 trillion pieces of plastic sloshing around in the world’s oceans, the vast majority coming from the world’s poorest countries where proper disposal or recycling is unavailable. David Katz, founder of the Plastic Bank, tells host Steve Curwood about his company that turns plastic waste collected by poor people into currency they can use to buy goods and services.

CURWOOD: Well, only about ten percent of plastic waste in the US is recycled, with another 15 percent or so going to incinerators, leaving three quarters of all that plastic for disposal. And in spite of the efforts to burn, bury and recycle the stuff, much of it ends up in waterways and roughly 5 trillion pieces of plastic now litter the oceans, mostly circling in currents as 5 enormous garbage patches. It breaks up into smaller and smaller bits, and tiny flakes of plastic are eventually eaten by fish and birds and make their way up the food chain. People are working to clean up the plastic already in the oceans but some entrepreneurs are working to stop plastic from getting into the ocean in the first place. One solution may be what’s called the Plastic Bank, an anti-poverty financing scheme dreamed up and explained by its founder David Katz.

KATZ: We are now and have built out the largest chain of stores in the world for the ultra, ultra poor where everything in the store is available to be purchased using plastic garbage. Most proudly we offer school tuition, and medical insurance, Wi-Fi, power, sustainable cooking fuel, hi-efficiency stoves, and everything else that the world needs and can't afford.

CURWOOD: How does this work? How does somebody get involved? What do they have to do?

KATZ: They can earn a living by going door-to-door, or through the streets collecting material, and at the end of their collecting day, they can bring it back to one of our locations where it's weighed, checked for quality, and then that value is transferred into an online account. Plastic is money. 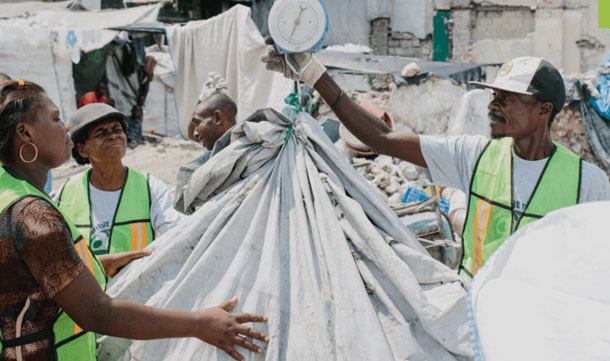 Workers bring plastic trash to a Plastic Bank center, where the plastic is weighed and the people get paid for recycling. (Photo: Plastic Bank)

CURWOOD: Where are you working and why did you choose those locations?

KATZ: Haiti is a requirement for the world. In our very back door is a catastrophe that is unfolding. The Philippines has been very profound for us as well, and we're just opening in Brazil. This year will be Ethiopia, and I think our entry into India will be through Delhi. Of the plastic that is entering the ocean, it is not surprising that it comes from those countries with extreme poverty. If you don't have power or food for your children, you have no consideration of recycling. It's not even in your realm of possibility. There is no garbage truck that comes by and picks up your waste. What you have is a stream, a river, a canal and the streets and that is the deposit. Most countries have two seasons. They have a collection season and a purge, the dry season where everything goes into the river bed and the rainy season when it comes in, it's all washed out to shore...out to sea, rather.

CURWOOD: How much plastic have you have been able to collect so far in Haiti, for example?

KATZ: Well, Haiti itself just in the few years we've been there has been a little over eight million pounds of material which equates to around 144 million bottles.

CURWOOD: And what do you call the project there?

KATZ: Ramassant l’argent in French Creole means picking up money, and that's exactly what they do.

CURWOOD: So, just how much do people get per piece of plastic?

KATZ: The value that people can achieve on a daily basis typically in Haiti can triple or quadruple their income. They are typically earning less than a dollar a day in what is predominately environmentally degrading industries, where here with recycling they can go from a dollar to four, and some recyclers are making up to six dollars a day. And it goes by mass, so the more that you collect, the more you make. It's an unlimited income opportunity.

CURWOOD: Talk to me please about a specific person that you work with who is collecting plastic and how the project has worked out for him or her. 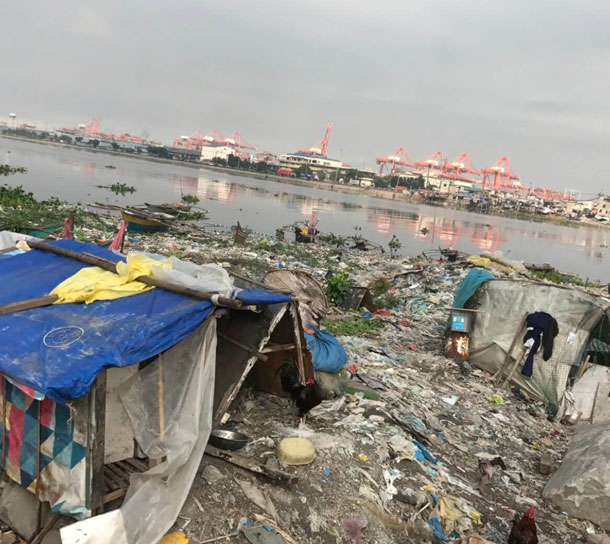 Roughly 80% of the plastic that ends up in the world’s oceans comes from the poorest countries. (Photo: Plastic Bank)

KATZ: Well, Lize Nasis, that’s a story that we love to share. Lize has really never left Port au Prince. She as well survived 2010 earthquake that left her a widow, homeless and without an income, and beautifully, as a result of the program, she can afford her two daughters school tuition and uniforms which are very important, and beyond the realm of most people. It's a beautiful inspiring story. I was just in Haiti a few days ago and I saw her as well leading a group of other women in the collection of material. We're inspired by her, and we continue to work for her and other women like her, providing an opportunity for women to have power in the family.

CURWOOD: Where does the money come from to pay people for collecting this trash?

KATZ: We sell that material as a raw material to great companies like Marks and Spencers and German consumer goods company Haenkel and many others that then put that back into their manufacturing. For our customers, it allows them to engage their consumer. Buy a bottle of shampoo and you're directly collecting material from ocean bound waterways and alleviating poverty simultaneously.

CURWOOD: Sounds like you're saying that the companies that are taking plastic are considering this a marketing expense.

KATZ: That's exactly what they do. 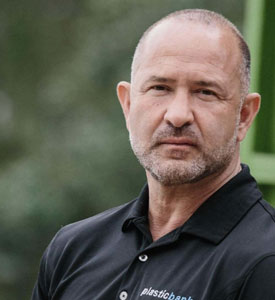 CURWOOD: So, companies are willing to pay a bit more for this out of a sense of social responsibility.

CURWOOD: But you know when budgets get tight, or the CEO or the division head changes, somebody will look at the numbers there and say, “That was a nice thing to do, but we're not going to do it anymore”. How do you work this into the financial DNA of companies so that they see it as something that gives them value for their money?

KATZ: I've not yet found an organization that is not focused on building customers and keeping them, and customers today are voting and every time they buy something they vote for what they want to occur. Now, I'm in London and inspired by what occurs in Europe, and one of our customers, Marks and Spencers, is sharing the story with me that more and more customers are coming into the store, taking things that have excessive plastic at the counter, ripping off all of the plastic and throwing it back in the store. That is what is occurring today. There is a wave of change occurring and if you are listening to this, I'm going to ask you to do something like the same.

Every time you buy something with excessive plastic, every time you buy something with single-use plastic, you are voting for that to continue, and if you have some ambition about changing what is occurring in the ocean, then participate. There is a complete social media department in every one of those manufacturers, and any one of those brands, they're listening. And so, reach out to them, tweet to them, e-mail them, let them know that you don't stand for it and let them know that you want alternative packaging. They listen and they will eventually provide what customers want. That's what they do.

CURWOOD: David Katz is founder of the Plastic Bank. Thanks so much for taking the time with me today.

CURWOOD: You can find out more about the plastic bank at our website, loe dot org.


Find out more about the Plastic Bank