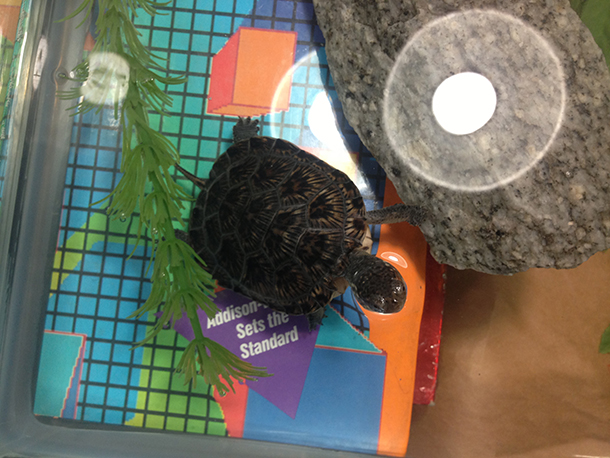 One of the hatchlings that Chris Denaro’s class cared for at the Carlisle School during the 2016-2017 academic year. (Photo: Don Lyman)

The tiny Blanding’s turtles that struggled out of the nest in summer are now getting a head start in life, fed and protected in school classrooms. Living on Earth’s Don Lyman visits the fifth-graders at the Carlisle (Massachusetts) School, and the two turtles they’re caring for, Tsunami and Squirtle.

CURWOOD: When we last paid a visit to the baby Blanding’s turtles, it was early October. They’d just hatched from the nest of Turtle 2028, and were ready to be sent to classrooms to be raised by Massachusetts’ schoolkids for a year. And in deep winter, Living on Earth’s Don Lyman took a trip to an elementary school doing just that, a few miles outside Boston.

[SOUND OF KIDS CHATTERING IN HALLWAY]

LYMAN: On a clear but cold February day, snow from a recent storm blanketed the outdoor basketball courts at the Carlisle School. But inside the tank where two young turtles lived, it was a balmy 80 degrees or so, and the classroom itself teemed with excitement.

LYMAN: I found myself among perhaps the only people with more questions than journalists: fifth graders.

SCHULER: You guys have so much curiosity about turtles! This is amazing. Yes.

LYMAN: Chris Denaro’s students grilled Emilie Schuler, the Director of Programs and Operations at Grassroots Wildlife Conservation, about everything from how many turtles are left in the world, to potential hazards the littlest ones face.

STUDENT: Do people step on those turtles?

SCHULER: They might. Yeah I’m sure and a small turtle like this it probably could get crushed by a person stepping on it.

LYMAN: The kids were in the midst of a yearlong project to take care of two baby turtles, to give the hatchlings a head start in life, so they’d have a much better chance of surviving to adulthood and boosting the threatened species’ numbers when they’re released in the spring. One of those babies was from Turtle 2028, the mother we followed starting in July 2016. By now the kids were pros at feeding the turtles, giving them fresh water and weighing them, but they still had lots to learn about some amazing things the hatchlings – which they’d named Tsunami and Squirtle -- could do.

LYMAN: During the harsh New England winters, those superpowers are essential for survival. Tsunami and Squirtle had it easy in their warm and artificially-sunny tank, but the kids who cared for them always had to bundle up during recess. We humans have to keep our bodies near a toasty 98.6 degrees Fahrenheit. If a human’s body temperature drops below that by even a few degrees, we can quickly succumb to hypothermia. But Blanding’s turtles can chill to just above freezing.

SCHULER: Can a turtle’s body – is it okay for a turtle, for its body to be 33 degrees?

SCHULER: Yeah! Right, that’s the really cool thing. It’s like kind of a superpower of turtles and of reptiles that they can have their body so, so cold. They can drop their body temperature like that and still be fine.

LYMAN: In order to still be okay with such a low body temperature, Blanding’s turtles have to slow down. Waaay down.

SCHULER: They’ve measured turtles that are this cold, and their heart was beating only one time every ten minutes.

LYMAN: It sounds incredible, but that’s normal for turtles in winter, part of a nifty adaptation that allows them to slow their metabolism way down. And when that happens, they need a lot less oxygen. They still need some – and can absorb small amounts through their skin. And they have another trick up their shell. 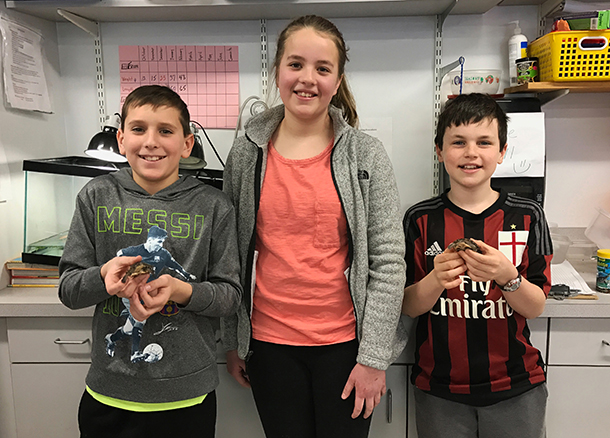 SCHULER: Scientists have even done studies where they’ve purposely, they’ve put turtles in water where they’ve bubbled out all the oxygen. Those turtles stayed under the water super-chilled for five months.

SCHULER: So those turtles were holding their breath for five months. Is that a cool superpower or what?!

LYMAN: But a metabolism that’s barely detectable is not so great for growing up big and strong.

SCHULER: No. So even if they were the same age as Tsunami, come April or May, when it starts getting warmer and they come out – what’s the size difference gonna be between Tsunami and their cousins?

LYMAN: The answer: around 7 or 8 times the weight! That’s the main reason why the headstart program is proving so valuable for boosting Blanding’s turtle population numbers. In just eight months, the kids make the baby turtles look like four-year olds. So they’re less attractive to predators like raccoons, herons, and bullfrogs, and much more likely to make it out in the wild.

CURWOOD: That’s Living on Earth’s Don Lyman, at the Carlisle School outside Boston checking in on the 5th graders, and Tsunami and Squirtle – the two tiny Blanding’s turtles they’re raising in their classroom to give them a leg up in life.