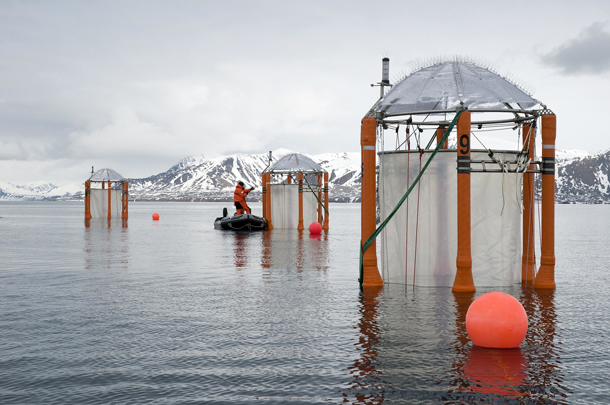 A new analysis finds that most if not all marine species will be affected by the rising acidity in the oceans from CO2 emissions. Research scientist Ulf Riebesell of the GEOMAR Helmholtz Centre for Ocean Research in Kiel, Germany spoke with host Steve Curwood about his team’s findings and what increasing ocean acidity could mean for species like corals and cod as well people who depend on the sea for food.

CURWOOD: So the EPA is required to regulate carbon dioxide as a pollutant because it changes the climate, but CO2 also pollutes the sea by making it more acidic. A new report called “Exploring Ocean Change” from the group Biological Impacts of Ocean Acidification, or BIOACID shows rising acidity leads to habitat loss and disruption of growth and reproduction of sea life. Ulf Riebesell is the lead author of the report and joins me now from Kiel, Germany, where he is a research professor at the GEOMAR Helmholtz Center for Ocean Research. Ulf, welcome to Living on Earth!

RIEBESELL: Thank you very much.

CURWOOD: So, your research found really a diverse response from organisms to the increase in acidification in the ocean. What kinds of impacts could this phenomenon have on life in the sea and on the various organisms?

RIEBESELL: Well, what we see is all groups, all large taxonomic groups in the ocean are affected one way or the other. It could be directly by the direct impact of acidification on individual organisms. It could be indirectly by changes in the habitat or changes in the food web. So, of the 380 studies so far on individual organisms that we have included in this meta-analysis, over 50 percent of the species were directly affected by acidification even at relatively moderate CO2 levels. On top of that, we will have changes in habitat, for example, all the organisms adapted to life in coral reefs. As the coral reefs are disappearing so will the habitat for these organisms, and that's an indirect effect. So, it's a wide array of organisms that will feel the pressure of acidification in connection with ocean warming.

The pH scale is a representation of the acidity of a given substance. But because it’s logarithmic, comparing acidities is not as straightforward as one might assume. (Photo: Piercetheorganist, Wikimedia Commons public domain)

CURWOOD: How do you study ocean acidification? What methods do you use to gather the data?

RIEBESELL: Well, there's a whole range of methods. You can start with test tubes in the lab. That's what has been done in the very beginning of ocean acidification research. Then people have gone to larger containers where they include more and more organisms, and eventually we have come to realize that we actually have to go out into the field to study acidification in natural communities, ecosystems, where all the components of a community come together, and that's why we have developed what we call mesocosms, these big containers which we can put out into the ocean, enclose a large body of water, and then simulate the future conditions by just adding CO2 into some of them at different levels and then we can basically stimulate today's ocean 10 years from now, 20 years from now and so on.

CURWOOD: How much acidification are you talking about here...and put that in terms that people who maybe don't really understand much about chemistry could understand.

RIEBESELL: Well, from chemistry you know we talk about the pH scale and this goes from zero to 14 and the middle of that is what normal freshwater has, about pH seven. That scale is kind of misleading because it's a logarithmic scale. So, if we talk about ocean water before human activity started, it had a pH of 8.2 and now we're down to 8.1. It doesn't sound like much but because it's a logarithmic scale, it means that acidity of the ocean has increased by 30 percent. If we continue to admit CO2 at current rates, then by the end of this century we would be at a change in acidity up to 100-150 percent, so basically doubling the acidity of the ocean in just about 150 years, which would be massive. We hope we're not getting there, and if we stay within the Paris Agreement – two degrees warming – that would also mean that acidification doesn't nearly go as far. But still, as I said we have already acidified the ocean by 30 percent. 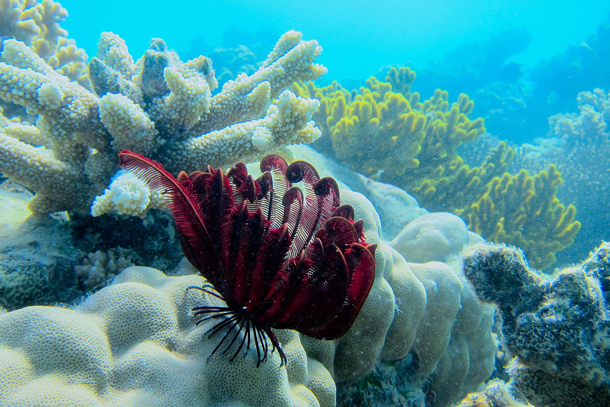 Rising acidity as well as rising temperatures in the oceans are a double hit taking a huge toll on the health of coral reefs. (Photo: Ryan McMinds, Wikimedia Commons CC BY 2.0)

CURWOOD: To what extent are we seeing the biota, various organisms responding now to the increase in acidification in the oceans?

RIEBESELL: Well, we certainly see some of the organisms and even some of the communities in ecosystems to already respond to the ongoing acidification. So, even today we can go out and see some in particularly calcifying organism to be affected. Their shells are thinner, and in cases where they're exposed to what we call corrosive waters where the water is under-saturated with respect to cuts in carbonate, the minerals of which they build their shells and skeletons, we can see that they are dissolving from the outside. Those effects are seen today. We also see that large parts of the warm water coral reefs are already affected by the combination of warming, but also in combination with acidification. If we don't turn around the present change in ocean warming and acidification, we will lose over 50 percent of the coral reefs in the next couple of decades, so very fast. Those changes are happening.

CURWOOD: So, tell me what your laboratory experiments are showing in terms of how species might be adapting or not to acidification in the ocean? 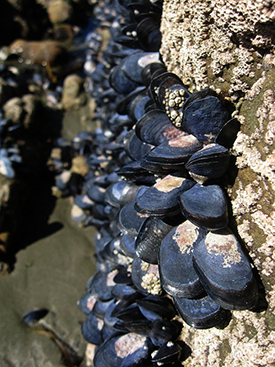 Shellfish like mussels build their shells out of calcium carbonate, which is less available in a more acidic ocean. (Photo: Anja, Flickr CC BY-NC 2.0)

RIEBESELL: That is in fact a very important question. Can organisms adapt to acidification? In our experiments we usually expose them to high CO2, low pH within days or weeks at the longest. In reality they have years to decades to get slowly adapted to this. Is that enough time for them to actually evolve and change their set up so they can deal with it? And what we've done is we've worked with organisms that have very short generation times, phytoplankton, the calcifying phytoplankton, they have generation times of one day, so they reproduce every day. So, that means they go through about 300 to 400 hundred generations a year and we have grown them now for four years, so 1,600 generations.

What we see is they can adapt to some extent. They can be slightly better in dealing with ocean acidification, but they cannot compensate even after so many generations, they cannot fully compensate for the negative effects of acidification, which makes sense because for a calcifier, acidification just means you have to invest more energy into building calcium carbonate, that means you have to make sacrifices somewhere else in growth, in reproduction and whatever. This is with small organisms that have short generation times. If you kind of extrapolate this to organisms with generation times of, let's say a year, then of course 10 years, 20 years only makes 10 to twenty generations. That's by far not enough to be fully adapted. 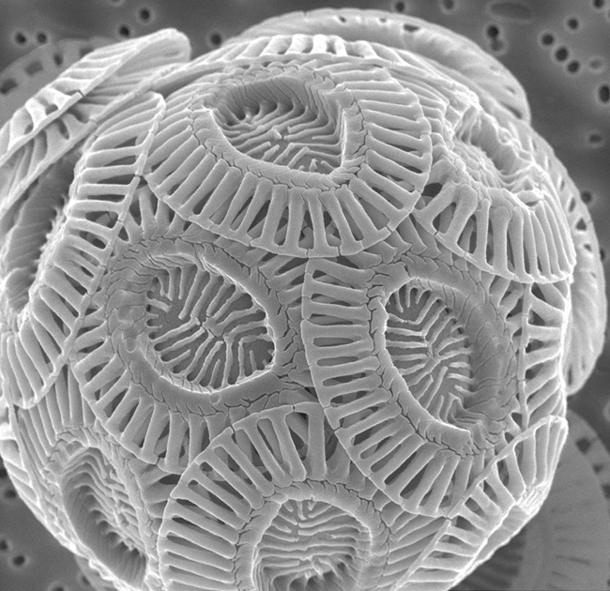 CURWOOD: What about some of the species in the ocean that been important economically and gastronomically to humans, for example, cod in the North Atlantic? How are they responding to increased acidification as far as you can tell?

RIEBESELL: So, we're very interested in looking at economically important species. We took cod larvae and juvenile fish of cod into the lab and exposed them to high CO2 and what we saw is that their survival is very much reduced under high CO2, low pH and this makes sense because larvae and juvenile fish usually don't have very good pH regulation in their body. It takes basically until they have fully developed their gills. That's when they start being under full control of pH. We then used those lab results and put them into some recruitment models where we have stock developments of cod in the North Atlantic and what it showed is if we use this 50 percent reduction in larvae survival, what it means in terms of stock recruitment is that we could have down to one quarter to even one-tenth of the stock production in the future ocean, and this is something we definitely need to consider when we talk about fish catches in the future and how much we can allow fisherman to take out of the ocean. 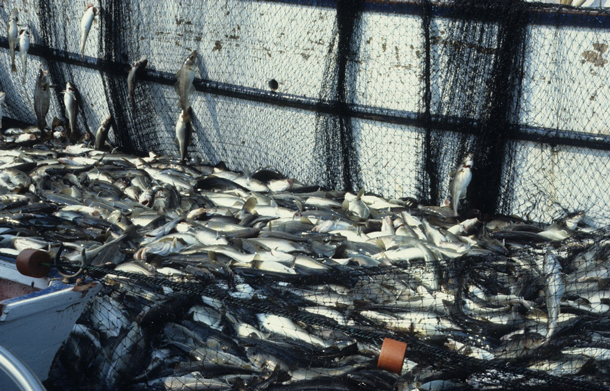 Atlantic cod are an important food source for much of Northern Europe, but increased acidity impacts their survival rates as juveniles and is projected to severely reduce fish stocks. (Photo: Derek Keats, Wikimedia Commons CC BY 2.0)

CURWOOD: Who is going to feel earliest and strongest the effects of ocean acidification around the world?

RIEBESELL: It's the same thing as with climate change. It's the poorest people that will feel this first. If you just look at the last FAO report, they say that about one billion people on our planet have protein from the ocean as their most important protein source, but these people mostly live in the poor counties. So, those one billion people will be affected by acidification most.

CURWOOD: And FAO, of course, stands for the Food and Agricultural Organization of the United Nations. So, what could be done in the near term to reduce ocean acidification, aside obviously from…from reducing the production of CO2. What technical things might be done?

RIEBESELL: Globally, it's almost impossible to change that. The global ocean is directly affected by CO2 emissions, will take up one-third of what we produce every day, so if we take our car from home to work and back, one-third of that CO2 goes directly into the ocean. There's nothing we can do about it unless we reduce our emissions. Locally or regionally, we could do something, for example, ecosystems like coral reefs that we value very highly that we do not want to lose, we could save by planting algae and sea grasses around these because by photosynthesizing they will take up CO2 from the ocean, they will increase PH in the seawater. We could even think of some lime in the waters around these coral reefs and thereby increase PH slightly, but it just provides another reason to do what we already know has to be done, which is reducing CO2 emissions.

CURWOOD: Ulf Riebesell is a Research Professor at the GEOMAR Helmholtz Center for Ocean Research in Kiel, Germany. Thank you so much professor for taking the time.

RIEBESELL: Thank you very much.