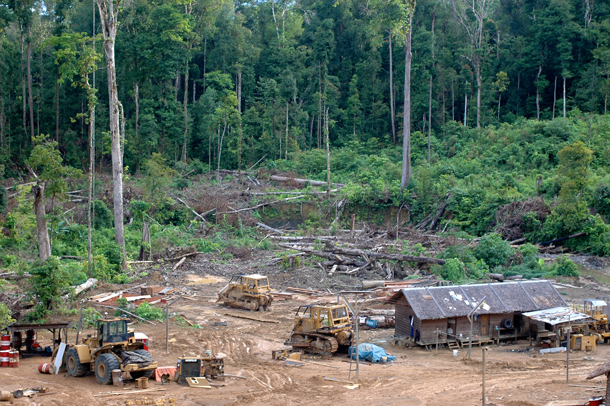 Tropical forests have historically absorbed excess carbon dioxide, but new research indicates that these areas are now actually a net source of CO2. Selective logging that degrades these ecosystems, along with deforestation, releases more carbon into the atmosphere than the remaining trees can sequester. Living on Earth Host Steve Curwood spoke with the study’s lead author, Alessandro Baccini of the Woods Hole Research Center.

CURWOOD: There has long been a conventional wisdom that tropical forests soak up carbon and help blunt the impact of industrial greenhouse gas emissions. But new research is finding that the tropics are actually adding to the problem of global warming, rather than absorbing carbon dioxide. In other words, the tropics are now a net carbon source rather than carbon sinks.

Alessandro Baccini of the Woods Hole Research Center is the lead author of this study, recently published in Science Magazine. He joins us now. Welcome to Living on Earth. Alessandro.

BACCINI: Thank you for having me.

CURWOOD: Now, your research finds that the world's tropical forests have now net carbon emissions of some 425 terragrams of carbon annually. What does that mean exactly, and how can the average person conceptualize that number?

CURWOOD: So, when did the tropics go from being a carbon sink to a net carbon source?

BACCINI: In our study we look only at the period between the year 2003 and 2014, and what we see that, if we can see the entire tropics, they always have been a source during this period. But it really varies depending where you look at. So, if for example you start to look at different countries, you see that some countries are still a sink or other countries in the course of this period actually change from being a sink to being a source, and just to give you an example, the Democratic Republic of Congo, DRC, went from being a sink until 2007 and then started to become a source after 2007. So, it really changes.

CURWOOD: So, what methods did you use to collect all this data on the carbon density of these forests?

BACCINI: So, you know, what we have to measure is the weight of the trees, the weight of the vegetation. So, the best way, the most accurate way would be to in essence chop down all the trees and then weigh all the trees, and you can understand that is impossible, and we don't want to do that of course. So, the other option is to actually collect those measurements in some samples. So, you go, and you try to collect samples that are representative of the variability of the carbon density.

The problem is that our study region is pretty big, is entire topics. And so, what we did here is, we combined field datum that we collected across the tropics with satellite observation. The advantage of working with satellite observation is that they’re cost effective in covering a very large area. And, if you are able to use your field datum to calibrate a statistical model that relates your field measurement with a measurement of the satellite, you are in good shape because then everywhere you have observation from the satellite you can actually generate an estimate of the carbon density. 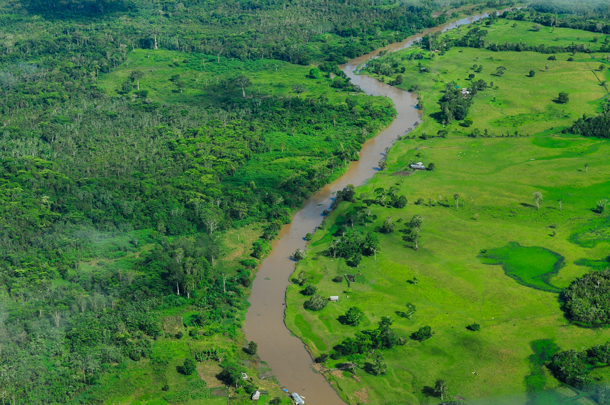 CURWOOD: What are the biggest threats to the ability of these forests to store carbon?

BACCINI: The threats are mainly anthropogenic. The first one of course is deforestation, but one aspect of the study that we consider interesting is that for the first time we were able to quantify the losses that are due also to degradation and disturbance, something that was not possible to do until now at this scale. Degradation in our study is the process that decreases the amount of carbon stored in the forest. It doesn't change the land cover. It doesn't change the land use. It is still a forest. It is just that it doesn't store the amount of carbon that it was able to store before. Until now, the focus has been on deforestation, and we knew that there was something more happening than deforestation, and so the study is showing how removal of single trees here and there and just the mortality of trees in the forest results actually in a significant amount of loss, and what is interesting now to better understand is the degradation. Is it again anthropogenic or is it sort of natural disturbance?

CURWOOD: What needs to change the policy level to reverse the carbon math of the tropical forests? There was a program the UN had, REDD, Reducing Emissions from Deforestation and Degradation. It was supposed to address tropical forests. What happened? What's going on?

BACCINI: I think REDD was and is a positive initiative. As you said, REDD, you know the second D of REDD is for “degradation”, and until now that was very difficult for anybody to be able to report on the second “D”. If you look at the result of our study, almost 70 percent of the emissions in the tropics are actually coming from the second D, from degration. So, from a policy point of view, if you only focus on deforestation, you tackle only part of the problem.

CURWOOD: What are the major reasons that forests are degraded? What happens to cause degradation?

BACCINI: Degradation is generated by anthropogenic activities, for example, selective logging. But what we find is that one process that is very common actually in developing countries is just the harvest of wood for energy. If you think about, even now in developing countries almost 70 percent of the energy supply comes from charcoal, from wood. On the other end there are natural drivers of degradation that consist in for example fires, mortalities due to drought, mortalities due to insect or a series of diseases that get their way in when the forest is under stress. 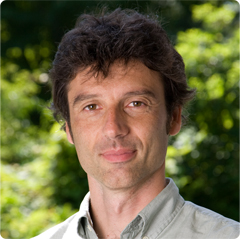 CURWOOD: What can you tell us about the carbon-absorbing capacity of other kinds of forests around the world?

BACCINI: That's a very important point. So what is happening outside of the tropics, well, a lot of forests actually are growing. One region that is very interesting for us right now is actually the Boreal ecosystem where, thanks to climate change, the conditions are changing so that we see a greening of this region but when we will finish our analysis we will be able to actually quantify if it is a sink or a source and have a better understanding of what is happening outside of the tropics.

CURWOOD: This is frankly rather disturbing discovery, that we're losing a lot more carbon from tropical forests than we were thinking previously. Please give me a reason to be hopeful about your findings.

BACCINI: Well, actually I think that it's a great news because forests right now are actually a source, we can actually invert this trend and make the forest a sink. And if you think about that, if we can, if we are successful in inverting this trend, we will be able to remove quite a bit of carbon from the atmosphere and, in my view, forest is the only technology that it is ready, safe, and available at such scale in order to fight climate change. And, while you do that, you don't only remove carbon from the atmosphere but you also, well, you conserve biodiversity. You improve the quality of water. You provide shelter and life to a lot of people, indigenous people or people in developing countries that use, and they need this type of ecosystem to live.

CURWOOD: Alessandro Baccini is a scientist at the Woods Hole Research Center. Thank you so much for taking the time with us today, Dr. Baccini.

BACCINI: Thank you so much for having me. Bye-bye.


The original study in Science: “Tropical forests are a net carbon source based on aboveground measurements of gain and loss”