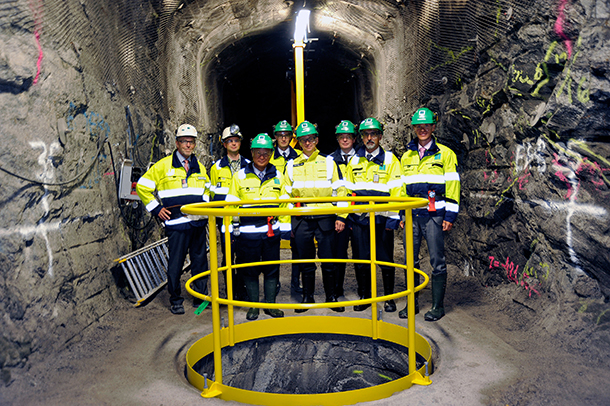 Finland is moving ahead with a system to store radioactive nuclear waste for 100,000 years, a possible example for other nuclear countries still struggling to come up with a plan. Living on Earth Host Steve Curwood spoke with Finnish nuclear policy researcher Matti Kojo and Stanford University nuclear security expert Rodney Ewing about the complexities of storing nuclear waste safely, and how community acceptance is key for success.

Seven decades into the age of nuclear power, the United States has yet to solve the problem of waste. Brand new uranium fuel is only slightly radioactive and easily handled. But when uranium is “burned’ in a power reactor the waste by-products, including strontium, cesium and plutonium can be a million times more radioactive than uranium—and one kind of plutonium is too hot to handle without protection for at least 250,000 years. And while the US debates what to do with nuclear power waste, Finland says it has found an answer, and plans to build one of the world’s first long term nuclear waste storage facilities in a labyrinth of underground tunnels. The Onkalo Nuclear Waste Repository is planned on an island off the west coast of Finland, and nuclear policy researcher Matti Kogo says that, once they bury the waste in the tunnels, not much else will need to be done.

KOJO: The idea is to, well, the idea is to more or less forget it. It’s based on passive safety. There aren’t any plans to put any kind of warning signs or anything like that. There won’t be anything.

CURWOOD: The plan is for Onkalo to store the radioactive waste for 100,000 years. In America, there is broad opposition to using Yucca Mountain in Nevada for long term storage of spent nuclear fuel, but the project in Finland has widespread support. Matti Kogo explains that the Finns have many reasons to be keen about opening the door to nuclear waste storage development.

KOJO: The local community has quite a close relationship with the nuclear industry. There are local people working at the nuclear power plant and the municipality is also dependent on the tax income coming from the company. So, we could say that the local community tolerates the waste. In the Finnish culture, in the Finnish society, there is quite high trust on authorities and scientists, and in this case, there is a lot of trust towards the safety regulator. 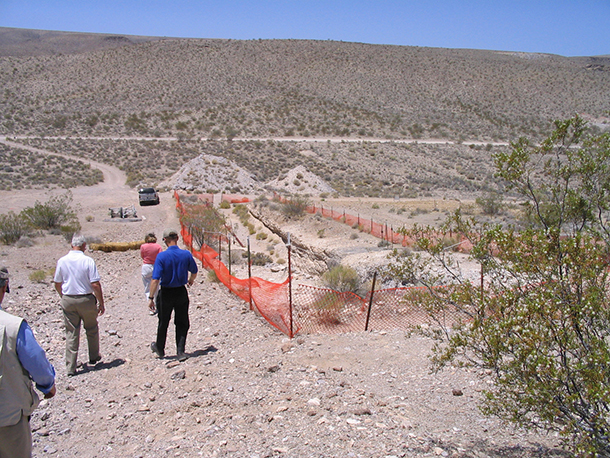 CURWOOD: Temporary nuclear waste stores around the world are filling rapidly and, despite local opposition to using Yucca Mountain for a permanent site, President Trump has proposed spending $120 million to continue working there. Stanford University Professor of Nuclear Security and Environmental Studies Rodney Ewing joins us now to explain the urgency behind finding a final resting place for deadly nuclear wastes. Professor Ewing, welcome to Living on Earth.

EWING: Thank you, glad to be here.

CURWOOD: So, first, let's talk a little bit of the physics of nuclear waste. What exactly is it?

EWING: When a reactor operates what you're tapping into in terms of energy is the nucleus of an atom, and you tap into that energy by splitting the atom - The process is called fission - and by splitting the atom we get a little bit of energy, actually quite a lot of energy but then we're left with the used fuel with once it's taken out of a reactor has to be cooled before it can be handled any further, and it has to be shielded because of the intense radiation field around it.

CURWOOD: Professor, when countries around the world first began embracing nuclear power, what were the plans for handling the radioactive waste that these fission reactors would generate?

EWING: Well, in fact, if we go back to the earliest days of nuclear power there's very little attention paid to the question of what to do with the waste - and this was partly, let's call it benign neglect - but part of the neglect was based on the plan or hope that this used fuel would be reprocessed.

CURWOOD: But that didn't happen. Why didn’t we do that?

EWING: Well, many reasons. First, in the United States we tried but not successfully to build such plans, but probably the fundamental reason was economics. It cost a certain amount to reclaim the fissile material. As it has turned out uranium is not as rare as we thought in the 1950s, early 1960s, and so it's much cheaper to just mine new uranium rather then reprocess. Now, one kind of footnote to this is actually for some time now, we've purchased weapons uranium from the Russians and diluted it down and that's been burned in US reactors.

CURWOOD: So, how urgent is this issue of building nuclear repositories for high-level waste around the world and in the US. 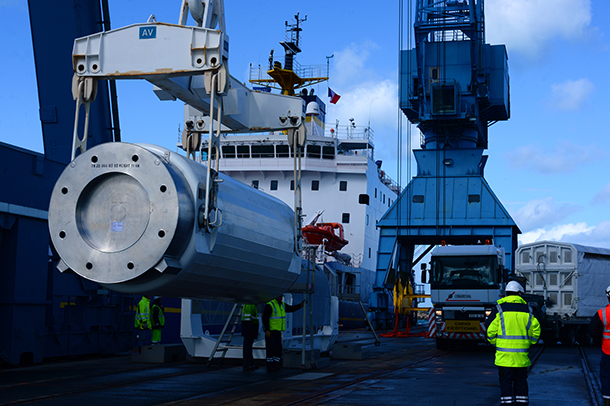 Storage of radioactive waste in most cases currently involves isolating the waste in a series of casks, but experts say this is only a short-term solution. (Photo: IEAE Imagebank, Flickr CC BY-NC-ND 2.0)

EWING: On one hand, one can look at the present state of the fuel. In the United States, the used fuel, accumulates at the reactor sites in pools and in casks, dry cask storage, at over 70 sites in 35 states in the United States. Pool storage or dry cask storage was envisioned to last for only a few decades, and so I would say if you are a community living near one of these sites, one would be anxious about the fate of this used fuel. The other perspective, let's say the engineering perspective, is that the fuel once it is in these dry casks probably can be stored in this state for many decades, some projected up to, say, 100 years. Even though that is a long time, that certainly is not an acceptable long-term solution, and the idea has always been around the world that geologic disposal can satisfy these long time periods that are required.

CURWOOD: How important is winning public acceptance and support for geological waste disposal projects? I mean, Finland has been successful with its public engagement and seems close to moving forward with a deep geologic solution currently to protect the rest of the world for 100,000 years from their radioactive waste. What are the lessons that the US or other economies could learn from what's going on in Finland.

EWING: Public engagement and acceptance is critical, and I say that based on a study conducted by the Nuclear Waste Technical Review Board which looked at the history of nuclear waste programs around the world, and what becomes clear from looking at the experience of other countries is, first, this is a very difficult job. It's very difficult to engage both the political and public elements in the process, and if we look at the countries that are moving forward such as Sweden, Finland, Canada, France, a noteworthy characteristic of all of those programs is that the company in charge of the project has a very well developed program of public engagement that stretches necessarily over decades. 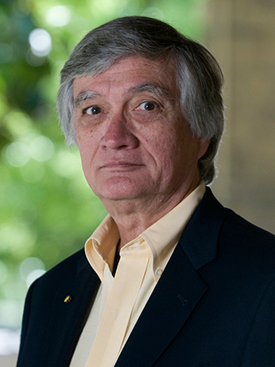 CURWOOD: In your view, how feasible would it be to adapt the Finnish process to America?

EWING: It would be very difficult in fact for three reasons: the size of the country is very different, so the ability to communicate between the government and the people I think is more difficult in a larger country like the United States; it would be difficult because the cultures are different in terms of views about authority and scientific credibility and so on; and it would be difficult because in United States we have the state/federal government system, where in Finland and Sweden you have municipalities. And so I think one can make the object ration that you need a plan for public and political engagement. We should study how other countries have done this, but certainly with all parties involved, we need to develop our own.

CURWOOD: Now, recently the Trump administration said that it would like $120 million dollars to re-open the licensing process for Yucca Mountain, that nuclear repository there in Nevada that has been kicking around for a long time. How does Nevada measure as a nuclear disposal site?

EWING: It's very clear looking at other national programs that there are really two filters that a program has to pass through. One is a technical filter, you have to do the science and engineering properly, and the other is a social filter. Having said that, now going to Yucca Mountain, yes, there's a strong push to fund the licensing process for Yucca Mountain, but I think one can't neglect the fact the state of Nevada has been very clear about their position, which is they don't want it. This means that for the US side, we try to skip the public engagement and acceptance of the strategy. On that point alone, I'm not very optimistic about Yucca Mountain as a future repository.

CURWOOD: So, sounds to me like there just is not the political system or will right now to really solve this problem.

EWING: It's very difficult because these projects last over decades. They last for longer periods of time then any administration, and so if we want to be successful we have to design a system that can survive the fluctuations of the political sphere, and are based on public acceptance from the state on down and a sound technical strategy.

CURWOOD: Rodney Ewing is Professor of Nuclear Security and Environmental Studies at Stanford University. He's also former chair of the U.S. Nuclear Waste Technical Review Board. Professor Ewing, thanks so much for taking the time with us today.

EWING: My pleasure. Thank you.


Wired: “Journey deep into the Finnish caverns where nuclear waste will be buried for millennia”