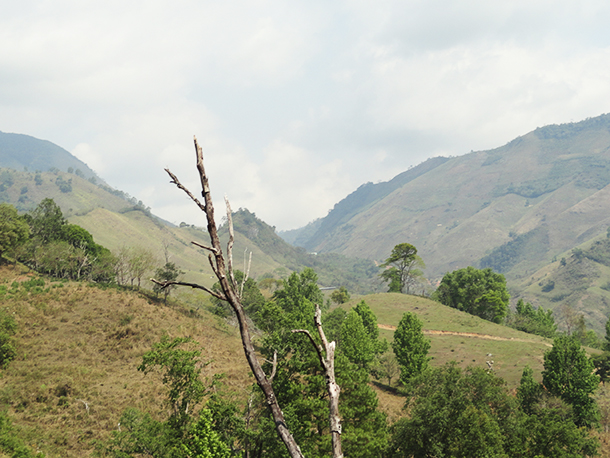 Narcotics smuggling through Central America has led to the loss of as much as 1 million acres of forest over the past decade, as illegal cash from cocaine trafficking is sometimes laundered by clearing forests for cattle ranching and other legitimate ventures. Steve Sesnie, lead author of a new study that draws this connection, told host Steve Curwood how the drug economy is threatening some of the most remote, biodiverse forest in Central America and the people who have lived there for thousands of years.

CURWOOD: It’s Living on Earth, I’m Steve Curwood. The illegal drug trade from South America generates huge, illicit profits for the traffickers, and now research by the US Fish and Wildlife Service has found that laundering those profits drives a good deal of deforestation along the smuggling routes in Central America. It appears the drug profits are being used in many cases to purchase land deep in the forest for cattle ranching. The beef can then be sold legally with proceeds that can be explained to bankers. And that has led to the destruction of some one million acres of Central American forest over the last decade, according to a team led by ecologist Steve Sesnie of the US Fish and Wildlife Service. He is the lead author of a new paper in Environmental Research Letters that documents this “narco-deforestation” effect.

Steve, welcome to Living on Earth.

SESNIE: Hey, thanks for having me.

CURWOOD: So, where are we talking about? Where was your research conducted?

SESNIE: Well, it was across all of Central America, looking at each country independently, but we focused more narrowly on a few countries where we were seeing higher rates of deforestation, larger patches of forest being cleared, and that naturally led to these areas with higher volumes of cocaine trafficking occurring, and that's mainly in the northern triangle. Honduras, Guatemala, Nicaragua, were the main countries that we eventually ended up focusing on.

CURWOOD: So, this is very interesting. How much cocaine production is there in those countries? 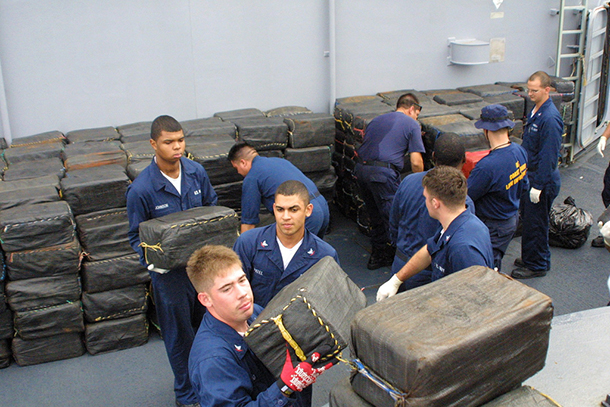 SESNIE: Very little actually. Most of production occurs in Peru, Bolivia, and Columbia, and this is a trafficking area where cocaine is being transported northward towards that the US border. Eighty-six percent of the cocaine that arrives in the US is transported through Central America currently.

CURWOOD: So, why is it that people who aren't growing cocaine...There doesn't seem to an agricultural need, but why is there so much deforestation where this stuff is being transported through?

SESNIE: That's a really interesting question. They seem to be unrelated, but in fact there’s a tremendous amount of profit to be made especially as you move cocaine northward. So that leaves a lot of money in these spaces, and money is often invested in other illegal activities or illegal land markets. So, clearing forests for cattle, and those cattle can be sold or land could be resold, that eventually allows that money to be legitimized or transferred into the legal economy. So, that's kind of the nexus of where the deforestation comes in. It's an agricultural driver, but underneath it is trying to launder these illegal profits. 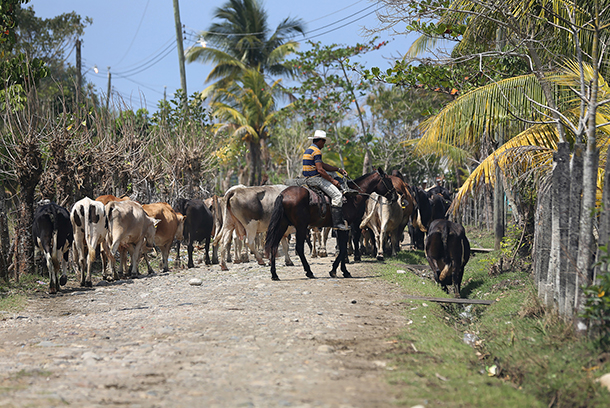 Cattle being driven along a rural road in Honduras (Photo: Frank McGrath, Flickr CC BY 2.0)

CURWOOD: So, how did you come up with that one million acre figure? What tools did you use?

SESNIE: It was a release of a global forest change data set. Some geographers at the University of Maryland had developed a way to, in the Google cloud, process millions of satellite images in a way that would develop annual estimates of forest loss and gain all around the globe. And so, that's some data that we’ve just never had before, allowing us to look at what might be considered background or "business as usual" deforestation for typical land settlement and agriculture which has been happening for many decades in Central America to this anomalous -- is what we're calling it -- very different form of land clearing. It's not very easy to clear and maintain tropical forest, so a lot of resources must be invested in order to do that, Chainsaws, gas, many individuals working together. And so we were seeing patches, sometimes over 100 hectares cleared in these very remote spaces at a very rapid pace, and that was what we are calling anomalous or a very different signature of forest loss.

SESNIE: Narco-deforestation. So, all of that came together when we started to combine this information and with the consolidated counter narcotics database, which is a database that quantifies, number one, how much cocaine per year is being transported to certain countries, and that's detected by radar and other monitoring devices, and then the amount of drugs that are seized or lost or delivered, and all that's quantified by the Office of National Drug Control Policy and kept as a record for each year. So we were able to combine this forest loss data with the flow of drugs at the country scale and also below the country scale within certain departments, and we found some strong correlations between two. 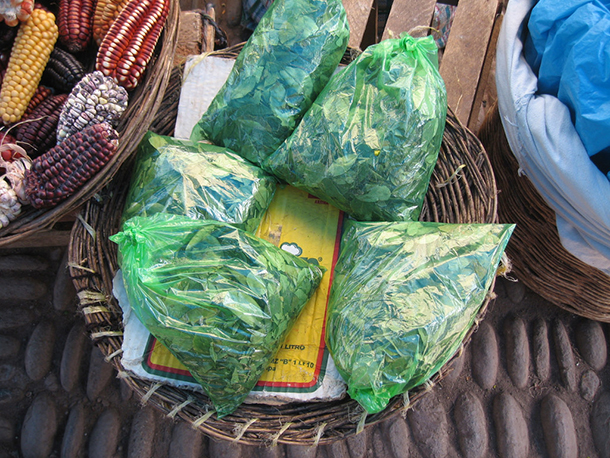 The coca plant is grown in South America for traditional uses as well as processing into cocaine that finds its way all over the world. (Photo: echo.plexus, Flickr CC BY-NC 2.0)

CURWOOD: So, where are the narco funds being laundered in this way, and what kind of ecology are we looking at? How important are these places biologically and culturally?

SESNIE: So, these are very remote spaces mainly along the Caribbean coast of Central America. So these are really the last large expanses of lowland, highly diverse, tropical forests that are also inhabited by several indigenous groups that are primarily the stewards of those areas. They are fishermen. They are hunters. They are small-share farmers that have lived in these faces for many thousands of years, and often times they engage in land clearing, but it has been traditionally this shifting cultivation where small areas are cleared and then left to rest. In tropical forest settings, things can recover quite quickly.

CURWOOD: What's going on, then, with those indigenous communities that are seeing the forest being cleared by folks who are flush with money from the narco trafficking?

SESNIE: Well, it's an interesting relationship, and it's not all always a bad one. Often, the traffickers themselves, they may actually provide some sources of employment that weren't there before. Some have been known to provide health benefits. Some support community activities, so oftentimes the traffickers may be fulfilling an economic development role, but that can also bring a great deal of violence. Murder rates in these areas have risen sharply. It can bring a lot of social health problems with it, so, as these drugs flow through these remote areas, they're also consumed. So, it's really a double-edged sword, but I think more often than not through the lifecycle of, say, a trafficking node or a trafficking center, there can be a great deal of harm and violence that also are currently in these spaces. 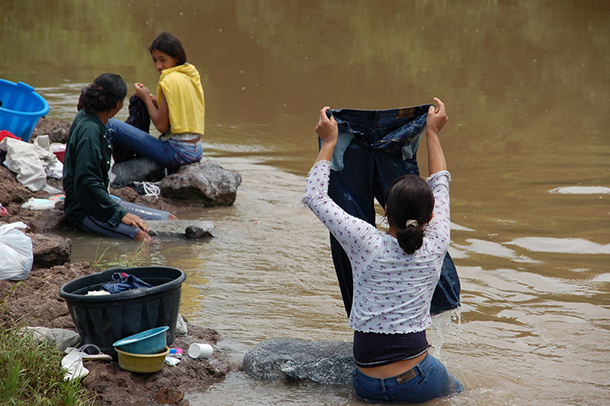 Honduras, Guatemala, and Nicaragua – the countries Sesnie’s team focused on in the study – are among the poorer countries in the world. Lucrative cocaine trafficking operations in these countries can bring rare prosperity to some of the most remote and undeveloped corners of these countries, but they can also bring violence. (Photo: ONE DROP, Flickr CC BY-ND 2.0)

CURWOOD: Now, of course, your research focused on the use of these illegally gained funds to contribute to deforestation, but I imagine that not all the illegal money from the narco trafficking in that region goes just into the deforestation. To what extent do you see luxury hotels appearing in places that might otherwise not be funded?

SESNIE: That's an astute observation. Money is being invested, and it's very opportunistic. Things like tourism, hotels, you name it, any sort of infrastructure, African palm plantations, other forms of agriculture. I've heard of shade-grown coffee, a whole wide variety of places where money can be invested and turned into legal profits, but the source often starts out as profits gained through trafficking.

CURWOOD: Now, why is Central America such a big transit zone for cocaine these days?

SESNIE: As you may know, the drug war often has a shifting front and during the 90s the Caribbean islands - Jamaica, Puerto Rico - were key trafficking hubs on their way to states like Florida, and the interdiction pressure put on the traffickers in that space really forced them over. It shifted over to Central America in the early 2000s, and it's a much larger landscape in Central America than these small islands. Many, many more places to conceal activities. It has become a regional activity that's in constant motion, constant adaptation.

CURWOOD: Steve, what can be done, if anything, to combat this narco-deforestation?

SESNIE: Well, I think it is very much a multipronged approach that is needed and not necessarily an escalation of the interdiction, but some social education, rural development. All of those, I think, are important policy mechanisms or parts of foreign aid that might improve the situation in Central America. These are just as important, if not more important, than the interdiction.

CURWOOD: Steven Sesnie is a Spatial Ecologist with the US Fish and Wildlife service and lead author of an article about narco-deforestation in a recent issue of Environmental Research Letters. Steve, thanks so much for taking the time with us today.

SESNIE: Yeah, thanks for having me. I really appreciate it.