Dear Tomorrow: Letters to the Future 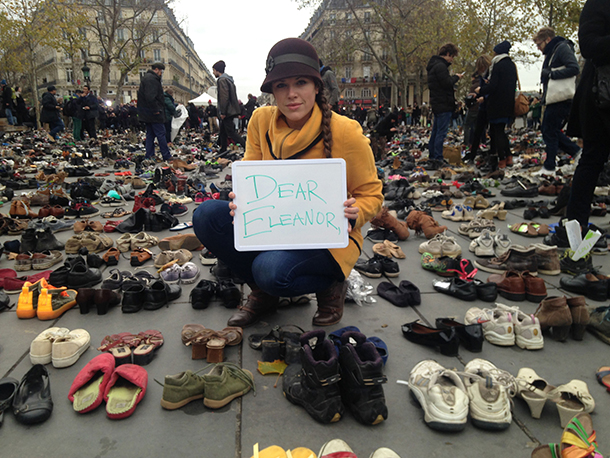 Trisha Shrum at COP21 in Paris in 2015 (Photo: DearTomorrow)

Climate disruption is expected to increase over the next few decades, and climate activists Trisha Shrum and Jill Kubit looked for a way to tell their young children how they tried to make a difference. Creating literary time capsules, they wrote letters to their kids and the people of decades to come about the climate protection actions of today. They read their letters for Dear Tomorrow and talk with Living on Earth’s Jenni Doering.

CURWOOD: As we turn into the new year, it’s a time for looking ahead to what the next 365 days might bring. Perhaps there will be a new blip in our changing climate regime. But years from now, when a child born today steps into adulthood, science tells us change will be well beyond a mere blip as we face a markedly warmer world. And while some warming is inevitable, what we do today can affect the extent, and that’s what a pair of climate activists would like us to consider. They have started a project called Dear Tomorrow that invites us to write letters to be read decades in the future about the steps we are taking now to lessen climate disruption. Trisha Shrum and Jill Kubit founded DearTomorrow and spoke with Living on Earth’s Jenni Doering.

DOERING: Trisha Shrum says the idea "For Dear Tomorrow" flew into her head in 2014, somewhere far above the Atlantic.

DOERING: She was flying home from a climate change conference in Iceland.

SHRUM: At the same conference, there was also Christiana Figueres, the head of the UN climate negotiations. And she gave a talk and ended with this really haunting story, that she has this dream where the eyes of these children who are living in the future are looking at her and saying, “You knew about climate change. What did you do about it?” And thinking about how that drives her and how that’s really what keeps her going and doing so many incredible things leading the climate negotiations, something kind of clicked for me. 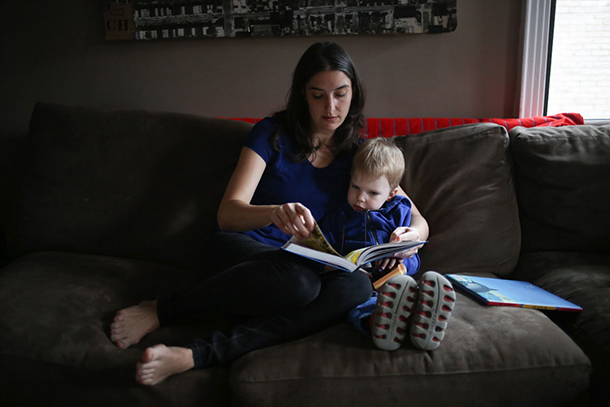 SHRUM: And on the way back from that trip, I was thinking about my daughter, who was ten months old – it was the first time I’d been away from her – like, what would I say to her? What would I say to her now, and how could I capture this moment of how I feel today about climate change in 2016 in a way that she can relate to when she is my age. So I opened up my laptop and I wrote a letter to her.

[SHRUM READING LETTER FADES IN WITH TYPING SOUNDS UNDER]

Dear Eleanor,
You are not yet a year old, and I love you dearly.

SHRUM [READING]: and the idea was that she was going to read it, I was going to send it to her, in the year 2050. I’m on a plane right now, watching the sun set for four hours as we chase it through the sky.

And I was just writing in a very honest, open way, of everything that I’ve been doing on climate change.

SHRUM [READING]: I have been driven by the climate change problem for quite a few years now.

The times I’ve struggled to feel like I was powerful enough, or that what I did really mattered enough to keep going.

SHRUM [READING]: In 2009, we all hoped that we would reach an international agreement in Copenhagen. And the negotiations failed. I became so discouraged I stopped believing it was possible to come to a global agreement on climate change.

And just realizing that all of that work and all the things that we do on climate change – suddenly, with my own daughter, it was very clear who I was working for.

SHRUM [READING]: I don’t know what the climate will look like in the year 2050. I think you’ll have a very different coastline. Many animals will be gone. The coral reefs are probably gone. The coral reefs were beautiful. Your father especially loved snorkeling. We went snorkeling on our honeymoon in Thailand and saw beautiful creatures of all colors and unlikely shapes. When you are old enough to hold on to the memory, I’ll take you snorkeling so you can see them for yourself and tell your kids about them.

And the moment that was probably the most powerful was when I was kind of almost giving my excuses as to why I hadn’t maybe gone as far or as full-in on climate change as I could have.

SHRUM [READING]: I’ve tried, but, to be honest, I haven’t tried all that hard. Instead I’ve focused on my own life. I fell in love with your father and got married and had you. Normal beautiful things. But I stopped trying so hard.

And, you know, saying like it’s so big, I’m so small, it’s so hard. And when you try to give excuses to your child about why you didn’t protect their future and why you didn’t enable the best possible world for them that you could. Those excuses just fall flat. You know, you can’t excuse yourself from your responsibility as a parent.

SHRUM [READING]: And now I am beginning to see that for you, I need to try harder than ever before.

And I started to think, you know, maybe if this is so powerful of a moment for me, if we could get other people to come in and write a letter or think about climate change from the perspective of, this is part of the legacy that I’m leaving for my kid, then that would be a way to really connect to people.

SHRUM [READING]: I love nature so much. It has been my sanctuary and my church and my playground ever since I was a little girl. And I want you to have that. I want you to have the opportunity to enjoy the beauties and the fruits of the world I knew. It is such a beautiful world. I love you dearly, my sweet daughter. You are so small. So innocent. So beautiful. For you and for everyone else, I will try harder.

All my love,
Mama 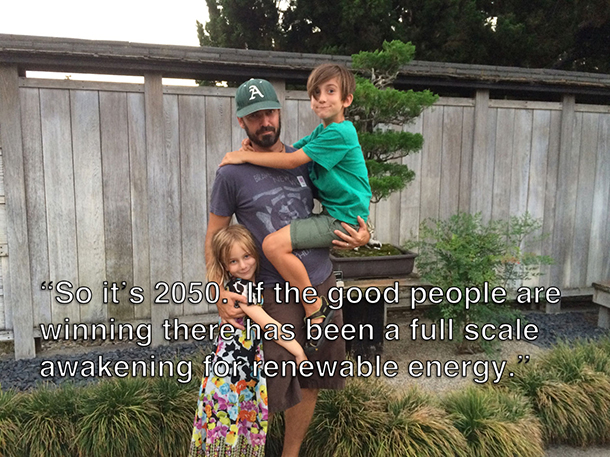 DOERING: Trisha Shrum brought her idea to write letters to the future back to Harvard, where she was a grad student. Fellow student Jill Kubit heard about a meeting to discuss a potential project on climate change.

KUBIT: You know, I had been spending like the last eight years of my life really thinking about, you know, how do we frame climate change in a way that’s relevant for people? How do we connect to people? And I had always felt like as a movement, as organizations, and as people, we weren’t always talking about it in a way that really, really got to the core of like, why are we doing this work. And the moment I heard this idea – Trisha was like, “I wrote this letter, it was a very powerful thing for me”. I was like, “I’m on board, I’ll do anything.”

DOERING: That’s how Jill became a co-founder of DearTomorrow. At the time, her son Gabriel was eighteen months old.

KUBIT: And I had been thinking a lot about what was it going to be like raising a child in this period of time which is very scary, and also potentially very exciting.

DOERING: So she wrote her own letter to explain to her son.

When I think about my own role in this challenge, I am reminded of one of my favorite quotes from one of last year’s DearTomorrow letters. MJ Coren so vividly wrote: “The ledge is crumbling. And those of us who stare down into the abyss wonder how will we ever get people to step back.”

I am one of the people staring down into the abyss. But with everything that I have learned about the solutions, I can also imagine that just across the way there is another ledge facing us. To me, the abyss looks more like a deep, narrow gorge, a ravine. This new ground across the way is a place where we have not been, a new world powered by renewable energy. If we can just get over to the other side, we can get onto more stable ground. We just need enough people to step back and build enough momentum to jump forward to this new place.

The DearTomorrow project is a small piece in trying to get people to take a step back, to reflect about what climate change means and to imagine what the other side looks like. This is my part of the solution. I am doing this for you. 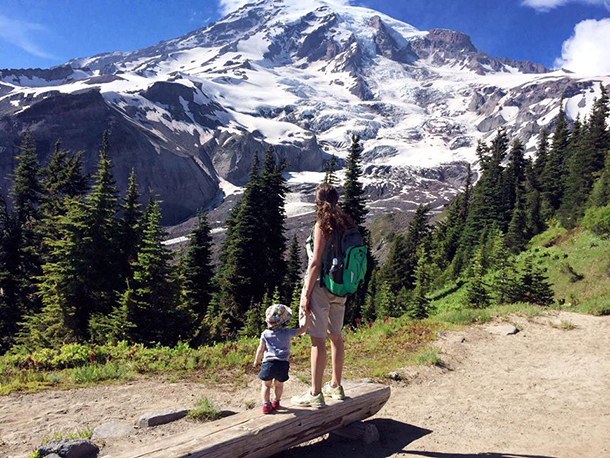 Trisha Shrum and her daughter Eleanor gaze up at the glaciers of Mount Rainier in Washington State, which are receding (Photo: DearTomorrow)

DOERING: Jill Kubit’s son Gabriel is still just a toddler and won’t be able to read that letter for several years. But Jill and Trisha have posted many of the letters they've gathered on the DearTomorrow.org website – where, they hope, they may help spur some action. Here's Trisha.

SHRUM: What we really want is to reach those people who are – they’re not climate deniers – that’s not really our focus. They’re kind of the people in the middle, regular people who think climate change is important, but they don’t necessarily see that it’s connected to their daily lives. And it’s important, but it’s not their highest priority. And we think that for those people, and especially for those people who have young children, those are the people that we can really reach with this project.

KUBIT: I also think that there’s a role for people who are already engaged in the climate movement to share their stories. At the heart of it, this is a storytelling project. And there’s people out there who have been impacted by climate change, or pollution, or polluted water. There’s also lots of stories of people who are creating new businesses, people who have risked being arrested, people who are talking to their representatives and are really really passionate about this issue and there are people out there who already connect this issue to their core values of their families. And so we want to give people a space to share their stories. And then, use it as a place where they can talk to their friends and family about why they care so much about this issue. 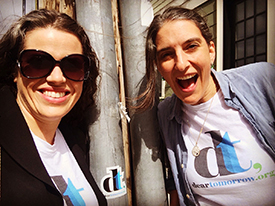 Trisha Shrum, left, and Jill Kubit are looking for an institution to house DearTomorrow’s letters in perpetuity (Photo: DearTomorrow)

DOERING: Jill Kubit. She says they plan to collect the letters written to the people of tomorrow, for a very long time, so Trisha Shrum says they're looking for a safe place to keep them:

SHRUM: We want an institution that can archive these letters so they’re gonna be available when our kids are grown, but also when we are long-gone dust in the wind and that this is a historical archive for generations to come. And then in 2030 and 2050, and potentially beyond, we want to set up a public exhibition of these letters.