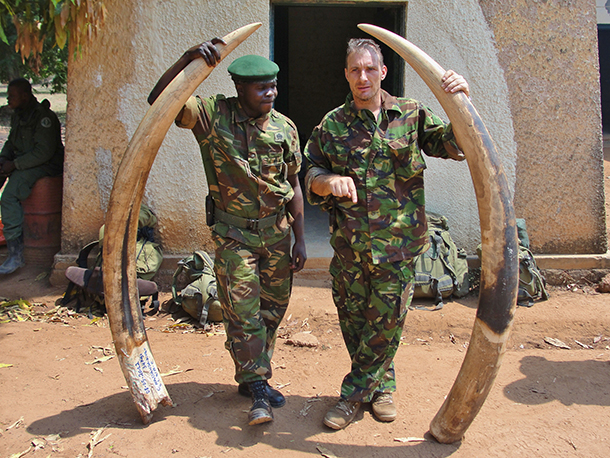 Every three years or so, the Convention on International Trade Of Endangered Species meets to determine the best way to protect plants and animals traded across borders. Living On Earth’s Bobby Bascomb attended the 2016 conference, and host Steve Curwood caught up with her to discuss the negotiations, the disagreements, and the creatures that gained stronger legal protection against poachers such as pangolins and grey parrots.

CURWOOD: Experts estimate traffickers in illegal wildlife take in some 19–odd billion dollars each year. The illegal wildlife racket is so lucrative that many endangered species face extinction, unless it’s stamped out – and that’s the aim of CITES, the Convention on International Trade in Endangered Species. The Convention meets every two or three years, and delegates from 182 countries have just wound up a meeting in Johannesburg, South Africa. Living on Earth’s Bobby Bascomb was there as well and she joins me now to give us the highlights.

CURWOOD: So, what happened at CITES this year?

BASCOMB: Well, close to 500 different species of flora and fauna were on the agenda, including some really fun species such as the psychedelic rock gecko, the tomato frog, the false tomato frog, several species of sharks and rays. And then there’s the African gray parrot and the Chinese crocodile lizard, which both got moved from the less restrictive CITES Appendix 2 to the more restrictive Appendix 1, which means international trade for those species is now completely prohibited. And trade is also now prohibited for the world’s most heavily trafficked mammal, an animal most people have probably never heard of. 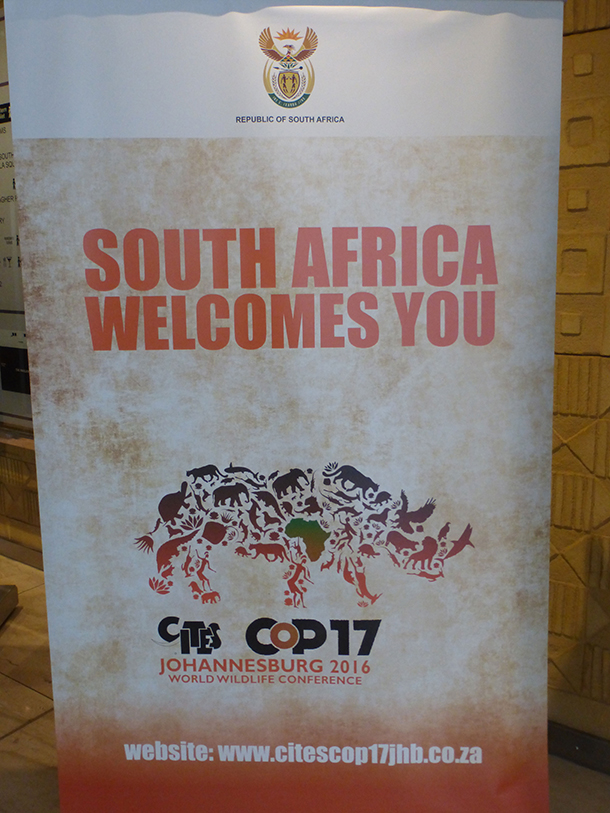 CITES is a triennial conference that assesses how best to protect endangered species caught in the international trade circuit. (Photo: Bobby Bascomb)

CURWOOD: Wait, I think I actually know this. It’s the pangolin, right?

BASCOMB: That’s right, yah. There are eight species of pangolins but they all look pretty similar…. kind of like an anteater covered in scales. They roll into a tight ball when they’re threatened, which makes them easy pickings for poachers.

CURWOOD: The most heavily trafficked mammal in the world… so, why are they such a commodity?

BASCOMB: Well in Asia pangolin meat is considered a delicacy, and Asian consumers believe its scales have special medicinal qualities, which is a widely debunked claim.

CURWOOD: But now pangolins will have a higher level of protection?

CURWOOD: Now, what about the big African animals everyone loves – you know the elephants, the rhinos, the lions?

BASCOMB: Well, all of those animals have a similar story. They’re caught in a conflict between the “haves” and the “have-nots”. Take elephants for example. South Africa, Namibia, Botswana, and Zimbabwe all have large, healthy populations currently on the less tough CITES list, so they can be traded but with restrictions. There’s currently a ban on the international ivory trade but Zimbabwe and Namibia introduced a proposal that would make it easier for them to sell their ivory. Edna Molewa, South Africa’s Minister of the Environment supports their proposal. 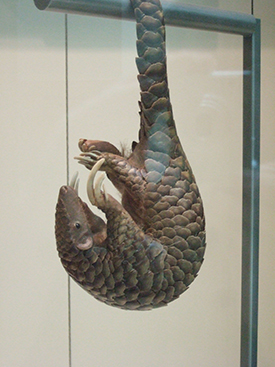 Pangolin trade persisted before the recent ban because their scales are believed to contain medicinal qualities, and some Asian countries consider their meat a delicacy. (Photo: Mark Simpson, Flickr CC BY-SA 2.0)

MOLEWA: The issue here is about managing these populations of ours in a manner that will actually bring sustainability to vegetation but also getting the needed funding for paying for the conservation functions.

BASCOMB: So, Steve, basically she’s saying that CITES needs to consider carrying capacity. How many elephants can any given piece of land sustainably support? But then you have to remember the elephant ‘have not’ countries. A new elephant census released at CITES shows a 30-percent decline in elephant populations across Africa from 2007 to 2014. In some countries like Cameroon, poaching is such a problem that elephants may go locally extinct there in the near future.

BASCOMB: Yeah, so a coalition of 13 countries with dwindling elephant populations put forward a counter proposal to list all savannah elephants under the toughest controls.

CURWOOD: So, what happened?

BASCOMB: Well, both proposals failed to get a two-thirds majority, so neither passed. Part of the reason the tougher listing proposal failed is that Namibia said that, if their elephants were listed like that, they would invoke what’s called a reservation. Sabri Zain of Traffic, a wildlife trade monitoring group, explains what that means.

ZAIN: This means that legally as far as they are concerned this listing does not apply to them. ‘Cause that will allow these countries to sell their ivory to whoever wants it without any controls or without any measures as that are in place right now under the Appendix 2 listing.

CURWOOD: So, that could be pretty bad for elephants in those countries.

BASCOMB: Oh for sure. And, you know, this clash we’re talking about between the “have” and the “have-not” nations extends to other species here in Africa as well. Take lions, for example. Today lions exist in less than 10-percent of their historical range, so countries with struggling populations like Chad, Ivory Coast, Mali, they proposed to transfer all lions to the toughest list, but countries with healthy populations like Zimbabwe and South Africa oppose that. South Africa actually exports lion bones to China for traditional medicine.

CURWOOD: Yeah, lion hunting is big business for both those countries, isn’t it?

BASCOMB: It is. Usually they use captive, bred lions in what’s called a “canned hunt”. Hunters can pay upwards of $35,000 to kill a lion, money which is supposed to go back into conservation and support local communities. But some CITES countries oppose these canned hunts and want them banned, or at least a ban on the export of lion heads, the trophies from hunting.

So, that debate was contentious but the Secretary General of CITES, John Scanlon, he told me that he thinks there’s room for compromise. 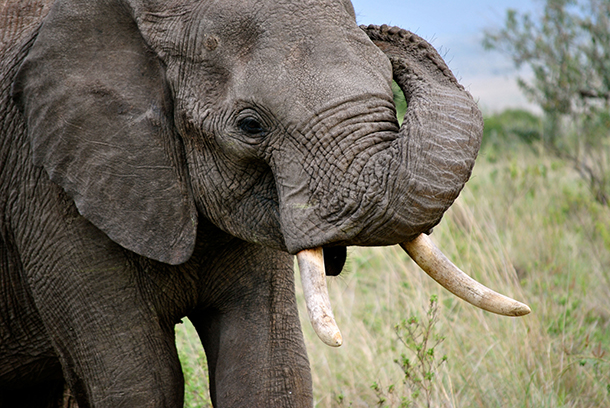 Poaching African elephants for their ivory contributed to a 30% population decline over a period of seven years, between 2007 and 2014. (Photo: Brittany H. Flickr CC BY-NC 2.0)

BASCOMB: And that’s exactly what happened. Countries voted to prohibit the export of wild lion parts but allow export of bones and trophies from captive, bred lions.

CURWOOD: Now, what happened at the CITES meeting with rhinos? I know they are critically endangered.

BASCOMB: Yeah, they are. There’s only about 25,000 African rhinos left in the world, and last year alone more than 1,300 were killed. Their horns are sold in Asia for their supposed medicinal properties, which, like the pangolin scales, are scientifically unfounded. South Africa, the CITES host country, is home to roughly 80-percent of the world’s rhinos, and there’s been an ongoing internal debate here about whether or not to legalize the domestic sale of rhino horn. Rhino farmers within South Africa… 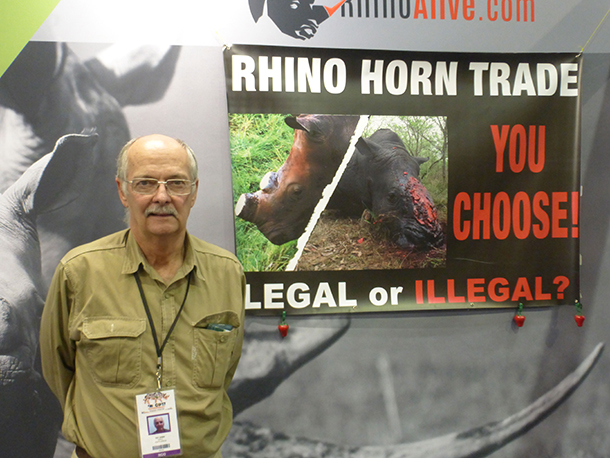 Rhino Farmers like Pelham Jones (pictured below) advocate for a legal, international rhino horn trade because they believe that rhino horns can be a renewable, ethical resource. (Photo: Bobby Bascomb)

BASCOMB: Oh, yeah. Some 6,000 rhinos are owned by private citizens, more than in the rest of Africa combined. They keep their rhinos on private farms and humanely remove the horn every few years. It’s made of the same material as fingernails or hair and can grow back in the same way. Rhino ranchers say it’s a renewable resource, and they’re sitting on a stock pile of horns worth millions. They want to sell that stock pile, but a ban has been in place for nearly 40 years. Pelham Jones, the chairman of the Private Rhino Owners Association says prohibition doesn’t work and it’s expensive to keep rhinos.

JONES: The cost for us to protect those animals from 2009 to 2016 is about $115 million. We desperately need funding to help conserve the species. We get zero government incentives or assistance in our conservation endeavors.

BASCOMB: So the small Kingdom of Swaziland requested to be able to sell their horn stockpile, worth about $10 million. The proposal was turned down, though, because of fears that any legal rhino horn trade would only fuel more poaching.

CURWOOD: So, Bobby, proposals to move endangered species from one list to another sound good, but will it make a difference? I mean, poachers don’t care what list these species are on.

BASCOMB: That’s certainly true but there’s also a lot of discussion of other solutions to these issues, so anti-corruption measures, reducing demand, satellite surveillance, DNA forensics to track these products, and I’ll be reporting on that for you soon, Steve.

CURWOOD: Looking forward to it, Bobby. Thanks.

BASCOMB: Thank you, Steve. Nice talking with you.

Living on Earth recap of CITES 2013