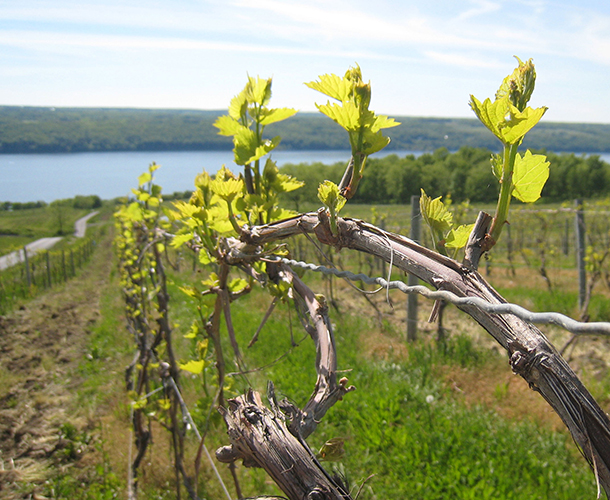 Fracking has been banned in New York since 2015. But as the Allegheny Front’s Julie Grant reports, a proposal to store natural gas in underground salt caverns in the state's scenic Finger Lakes region has touched off opposition concerned about the safety of a local water source.

CURWOOD: The glut of natural gas from the fracking boom has industry looking to export it and store it, with over 400 underground storage facilities in the US in places such as old mines and depleted aquifers. And that demand for storage is how some residents and wineries in the Finger Lakes region of New York got involved in a long term standoff with Crestwood Equity Partners. The Allegheny Front’s Julie Grant visited Seneca Lake, to look at Crestwood’s plans to store natural gas and propane from Pennsylvania and Ohio in the salt caverns there.

GRANT: Driving around Seneca Lake, evidence of industry is everywhere.

GRANT: The wine industry, that is. There are fields upon fields of grapevines, with wineries and tasting rooms nestled along the lakeside, like this one.

GRANT: Damiani grew up around here. He and his partners started clearing land and planting grapes in the early 1990s....

DAMIANA: And realized the revolution that was taking place here in the grapes we could grow and the wines we could produce.

GRANT: In recent years, internationally known vintners have moved to the Finger Lakes. The industry has blossomed into more than 100 wineries, distilleries, and breweries. It’s been named a top destination for wine lovers. Still, Damiani has kept his job at Cornell University. 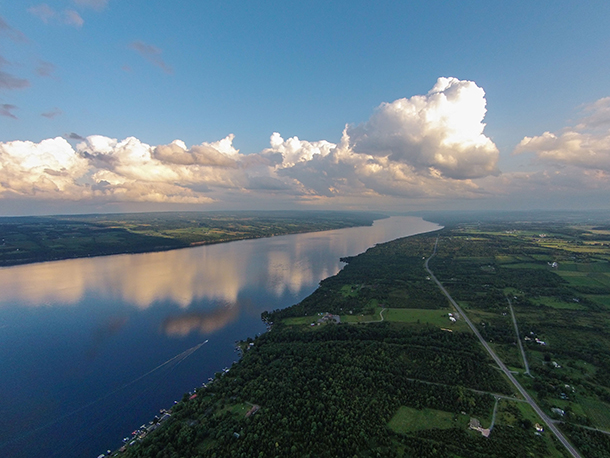 DAMIANA: It’s a struggle. It’s a tough, competitive business, and every little thing matters in this business. The main part of it is tourism.

GRANT: On the late spring weekend I visited, the town of Watkins Glen on the southern edge of the lake was packed. And the nearby state park? It’s one of the most visited in the country. We could barely squeeze through some spots, there were so many people taking selfies.Many tourists come to taste and buy wine. They also boat and fish on Seneca Lake, a deep, and salty lake that supplies drinking water to 100,000 people.

Looking out the tasting room window, over the grapevines, Damiani points across the Lake to the US Salt plant. He and others who work and live here worry about a plan under consideration by the New York Department of Environmental Conservation to store natural gas, propane and butane in the salt caverns. 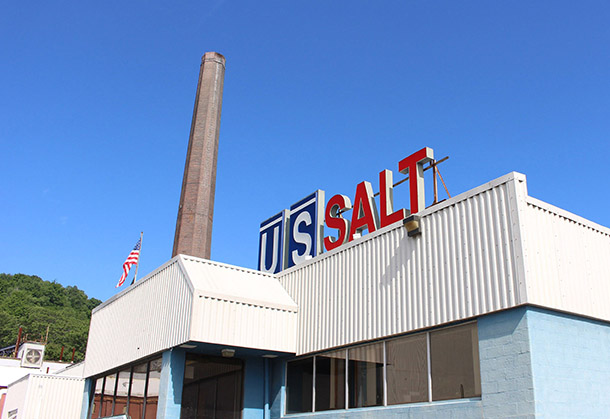 The US Salt plant in Schuyler County, New York on the shores of Seneca Lake. (Photo: Julie Grant)

GRANT: This is the sound of salt being packaged and shipped out at the plant in Watkins Glen for pharmaceuticals, cleaning, and just regular table salt. Salt has been mined under Seneca Lake for over a hundred years. The company that’s now called Crestwood bought US Salt in 2008. Crestwood declined an interview for this story, but they got me in touch with Mike Gilbert, a union worker at the plant.

GILBERT: I work in the shipping department. I’ve been here for about fifteen years now.

GRANT: I caught up with Gilbert around 8:00 A.M., during his second shift. He says, to get the salt, they pump millions of gallons of water down thousands of feet into the caverns at high pressure. The salt dissolves in the water, and then they pump it back up…

GILBERT: ...it’s a brine. Brine is a liquid. It looks like water. You wouldn’t know unless you actually taste it that it’s very salty.

GRANT: The brine is stored in open ponds, or pits. It’s heated, to evaporate the water.
Crestwood wants to use the salt caverns to store fuels.

GILBERT: What they’re proposing to do is put propane down in there.

GRANT: 1.5 million gallons of propane, as well as 600,000 thousand gallons of butane. The company already stores natural gas in the salt caverns, and wants to expand that capacity.
Gilbert says the United Steelworkers support the project. Crestwood plans to add up to 17 full time jobs. 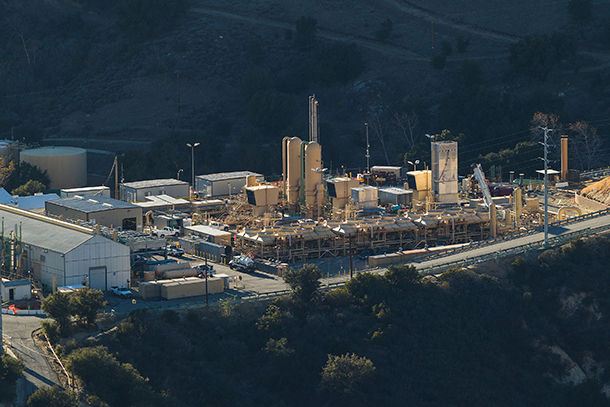 Some Seneca Lake residents express concern that storing natural gas, propane and butane underground in the salt caverns there risks a disaster such as the massive leak at Aliso Canyon in California, which spewed methane for four months. (Photo: Scott L, Flickr CC BY-SA 2.0)

GILBERT: I would love to be able to give 17 people the same chance that I’ve had to raise my family. If 17 more people could do that in this area, that’d be phenomenal.

GRANT: But a lot people don’t think it’s worth the risk.

More than six hundred of people have been arrested protesting Crestwood during the years its storage plans have been under consideration. They regularly stand at Crestwood’s front gates with signs like, “Make love, not methane” and “We are Seneca Lake.”
Anti-fracking activist David Braun of California recently joined them.

BRAUN: I am risking arrest with you all today, because of disasters with gas storage that I have seen up close. Don’t let it happen here.

GRANT: Braun is talking about the huge leak from the Aliso Canyon - where they store gas in depleted oil fields. It spewed methane into the air for nearly four months, before being plugged in February.

BRAUN: Like the facility here at Seneca Lake, the Aliso Canyon facility was created from unlined holes in the ground that were never engineered to store anything, let alone highly pressurized, flammable gas. 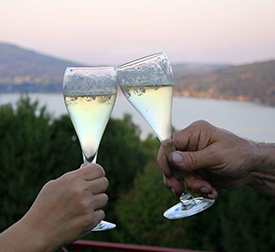 GRANT: The New York DEC found last year that opponents have not provided adequate proof to back up their concerns about the Crestwood’s plan, although it hasn’t given final approvals for the project. And the Federal Energy Regulatory Commission has already approved the natural gas expansion project.

BARNES: And so, based on that, I don’t know why it just can’t get going. It’s really a political situation.

GRANT: I met Philip Barnes, a retired security officer, on the docks in downtown Watkins Glen. He’s a legislator in Schuyler County, where this is being debated.

BARNES: It’s totally up to the Governor to make a decision. And it’s been six, seven, eight years now in the making.

GRANT: Governor Andrew Cuomo banned fracking in New York a couple of years ago. This spring, the DEC denied water permits for the Constitution natural gas pipeline, from Pennsylvania to Albany. Opponents of Crestwood’s plans want the DEC to continue this anti-fracking trend. They say the company is trying to make Seneca Lake a hub for fracked fuels from Pennsylvania to supply the entire Northeast, and they want the administration to stop it.

GRANT: Many are worried about the project’s impact on water quality.

Tina Hazlett manages a vineyard here that’s been in her husband’s family since 1852.

HAZLETT: So we’re already, Seneca Lake is the saltiest lake in the Finger Lakes, and it’s because of those salt caverns.

GRANT: Hazlett points to research that shows moving pressurized fuels into and out of the salt caverns could push the salinity of the lake even higher.

HAZLETT: They’re already telling people if you’re young or elderly or have high blood pressure don’t drink this water. This is the water source for over 100,000 people. There’s no other water source, so, you know, what are people supposed to do? 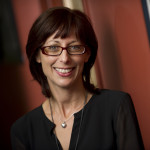 GRANT: Geologist John Halfman lives here, and has been studying the salinity issue in Seneca Lake for 25 years. He agrees with the DEC, storing fuels in the salt caverns should be safe.

HALFMAN: If everything goes as planned, nothing’s going to happen, in which case I think it’s a good idea. If there is some unfortunate mistake, then it’s a horrible idea.

GRANT: The DEC would not comment for this story. Crestwood and the community are awaiting their permitting decisions. I’m Julie Grant.