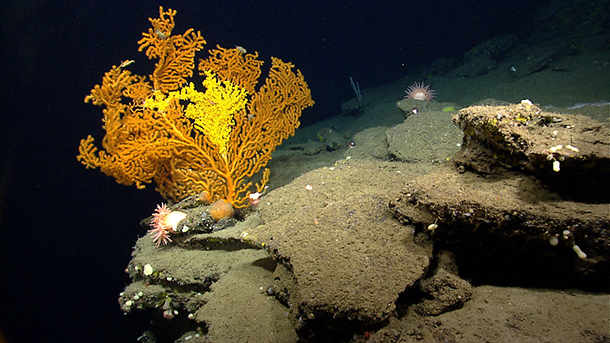 A peek at what lies below the surface less than 150 miles of the New England coast, where President Obama recently designated the Atlantic’s first National Marine Monument. (Photo: Green Fire Productions, Flickr CC BY 2.0)

President Obama has created the first national marine monument in the Atlantic Ocean, at the edge of the famous fishing grounds of George’s Bank. There are canyons deeper than the Grand Canyon and four large underwater mountains in the nearly 5,000 square miles of ocean that now has the same status as a national park. With a rich biodiversity that includes massive corals, New England Aquarium senior scientist Scott Kraus calls this area 130 miles off Cape Cod the "Serengeti of the Seas". He joins us now. Welcome to Living on Earth, Scott.

CURWOOD: So, most of us will ust never have the opportunity to explore this new marine monument the way to tourists can see America's national parks on land, the national monuments on land. But you have, so tell us what's it like there?

KRAUS: The Monument’s area is the edge of the continental shelf of the United States. So the water drops from the top of Georges Bank. It's perhaps 300, 400 meters deep, and all of a sudden, it drops off to four miles deep, and in that steep drop off there are underwater canyons created tens of thousands, hundreds of thousand years ago, and then in addition to that it also...Georges Bank sticks out into the Atlantic so you have these deep water currents coming up out of the Gulf Stream and elsewhere that rush up and bring a lot of nutrients out of the ocean floor to the surface. So, the place is remarkably productive. 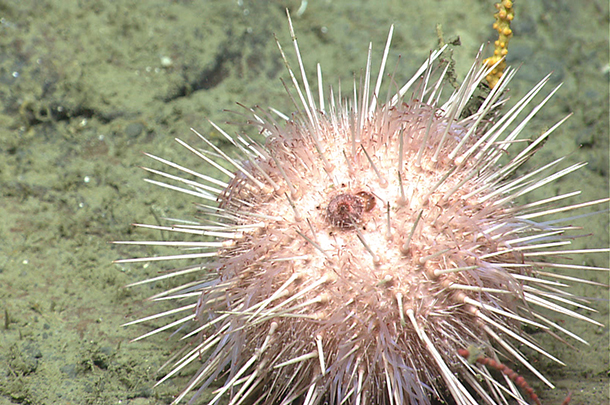 A sea urchin found along the Southeastern wall of Oceanographer Canyon, one of the three included in the monument. (Photo: NOAA Photo Library, Flickr CC BY 2.0)

KRAUS: In terms of the number of species that occurred there, and the number of animals it's significantly higher than all the surrounding areas. I guess the way I would explain it is, you can see thousands and thousands of dolphins and Pilot whales and Sperm whales extending along the shelf edge for miles and miles, and I have seen thousands at a time. The thing that it reminds me of is that those kind of National Geographic images of the great migrations on the African plains like the Wildebeest migrations and so on. It's just thousands of animals. And the only difference is that there's more diversity in some of these habitats. The Monument’s area has got, oh, probably eight different species of dolphins, several different species of Pilot whales and grampus, and then sperm whales and a lot of Beaked whales, stuff that you don't see in coastal waters at all. It's not your average whale watch.

CURWOOD: If you were to give me a short list, which species will be positively impacted by this new protected status of this marine territory?

KRAUS: Probably the deep sea corals. Deep sea corals are easily damaged by trawlers, or even traps setting on them can damage them. We've seen some evidence of that in the deep sea dives that have been done out there. So there's an incredible diversity and abundance of corals in this monuments area down in the canyons that are just beyond imagining. So, for example, there's a coral called Bubblegum coral and it looks like somebody just kept sticking bubblegum together until you had a very large coral piece. These things grow eight to 10 feet tall and they live over 1,000 years. It's like an underwater Joshua Tree, you know, these animals live for an extremely long time, but therefore they're quite fragile, you don't want to disturb them or break them cause they been around a lot longer than we have and it'll take them a long time to get back. 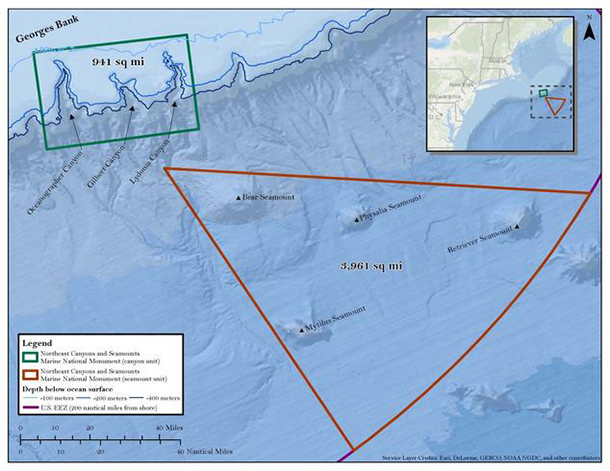 CURWOOD: So let me ask you, specifically, what types of human activities does this designation as a National Marine Monument prohibit then?

KRAUS: It will prohibit all fishing. There's a phase out period for red crab and lobster over the next seven years, and then all commercial fishing will be banned. Recreational fishing is allowed. It eliminates all possible oil drilling. The mining issues will be put to bed as well. There will be no deep sea mining, so it's really protection from major industrial activities.

CURWOOD: Now, opponents of this Monument say it will have devastating impacts on New England's fishing industry. Your thoughts?

KRAUS: There are some fisherman who fish out there. I don't think there are any fishermen who fish out there year-round. Most of them are limited to a couple of seasons, and the data that I've seen on fishing activity out there indicates a very small number of people working there and a very small percentage of their time is spent there. So my suspicion is that this is not a big economic problem. I've heard wildly exaggerated numbers about thousands of fishermen and millions of dollars and the data just doesn't support that.

CURWOOD: How important is this area for helping breeding populations of fish up there on the continental shelf?

KRAUS: For this particular area we don't know that. Those kind of studies haven't been done, but the other thing it does that’s really important is that we live in a world where the oceans are warming fairly rapidly and they are becoming more acidic. The climatological changes in the north Atlantic are, and in fact in the Gulf of Maine, are happening faster than anywhere else in the North Atlantic, and so we really need reference habitats that are not disturbed by all kinds of human activities, and this is a really good one for that.

CURWOOD: So there was an earlier version of this proposed monument that covered an even wider part of the ocean. How convinced are you that the final plan adequately protects and preserves these important habitats in the Atlantic? 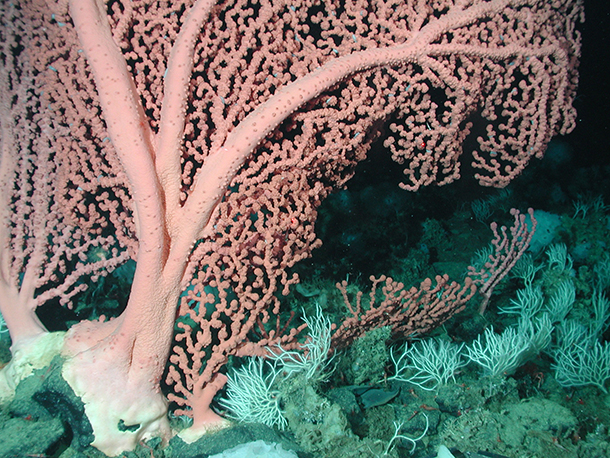 KRAUS: You know, if you're a marine mammal, more is better. If you were a fisherman, you would say less is better. But bigger would have been better from a scientific point of view only because you would capture more of the diversity in that area. In the long term, I think it's too early to tell, but I think the advantage of this is that it puts a stake in the ground that allows us to start thinking about what a marine protected area might do, both for fisheries and for understanding climate change and understanding the ecosystems. This is an area that is not well studied. There's a lot more to do. There's big areas where we haven't had a look around. There's species being discovered there every time somebody goes down. I'm a marine mammal guy so I like whales, right? But my favorite animal in this monument is something called a Xenophyophore for which is the largest single celled animal in the world and they roll around in the sand and the bottom and they get sand on the outside. I don't know what they're thinking, but it's really impressive to have a cell the size of a softball.

CURWOOD: It's the size of a softball?

CURWOOD: So, how do you think this Monument is going to affect the way that we as a nation possibly think about the oceans, and about how we proceed with ocean conservation at the national level? 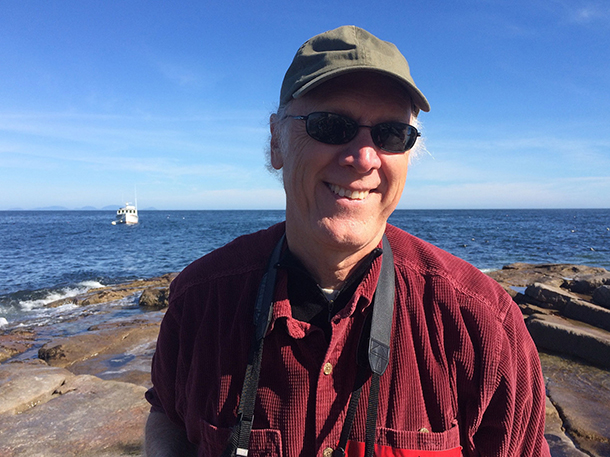 KRAUS: These conversations are going to go on for a long time. I think that climate change is going to force the discussion into places that nobody expects, that there are going to be changes in commercial fisheries, there are going to be changes in sea level and coastal resilience that are going to make people think much more carefully about preservation, certainly of ecosystems. I mean, we've learned our lesson from, I would say, Katrina. If you look at the way in which we altered the coastal ecosystem outside of New Orleans, people are now realizing, oh my god, we've got to put back mangroves, we've got to get rid of these canals, we've got to do things that actually are more in keeping with the original shock absorbers that Mother Nature provided, and I suspect that we're going to see that kind of discussion take place around marine national protected areas all around the country.

CURWOOD: Scott Kraus is a Senior Scientist at the New England Aquarium and Research Professor at University of Massachusetts, Boston. Thanks much for taking the time today, Professor Kraus.

KRAUS: Thank you for having me.

NOAA: What is a marine national monument?

The President spoke about the monument at the Our Ocean Conference