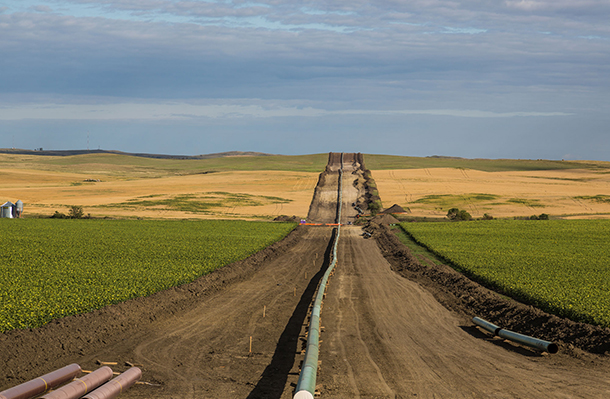 A section of the Dakota Access Pipeline in Salem, North Dakota. If completed, it will be 1,172 miles long and could carry half of the light sweet crude oil produced by the Bakken Shale. (Photo: Tony Webster, Flickr CC BY-SA 2.0)

Native Americans have been protesting a planned oil pipeline slated to cross the Missouri River in North Dakota. The Standing Rock Sioux Nation says the construction threatens their drinking water and infringes on their historic lands, but petroleum officials say the project is a safe way to transport a valuable American asset and would bring jobs. Jaime Kaiser reports.

CURWOOD: As US oil output has increased, companies are faced with a problem. Getting crude from the fracking fields to market. Trains are overloaded and vulnerable to fiery accidents, so some want to build more pipelines, and those bids can spark passionate opposition. The latest flashpoint is the Dakota Access Pipeline, a $4 billion project to carry over half a million barrels of crude oil per day out of the Bakken Shale. Hundreds of Native American protestors have mounted fierce demonstrations, fueled in part by outrage at the proposed 1200 mile route that would cross the Missouri River and ancestral lands. Opponents say the route was approved by the Army Corps of Engineers in violation of federal laws meant to protect clean drinking water and preserve ancestral tribal lands. Living on Earth’s Jaime Kaiser has our report.

PROTESTOR: This is a new warrior, a true warrior who stands up for our rights. Rights that Native Americans have paid for in blood. They made the constitution out of a lie. A lie to the world. We have the right to assemble.

KAISER: The standoff against the Dakota Access Pipeline between local authorities and protestors led by the Standing Rock Sioux Nation have been going on for weeks. The flash point is the construction site by the Missouri river where The Army Corps Of Engineers approved permits in July to build sections of pipeline that will pump barrels of crude oil from the Bakken shale in North Dakota across South Dakota, Iowa, and Illinois to East Coast markets. The Sioux filed a lawsuit against the Army Corps of Engineers alleging that the permits violate federal law. On September the 6th, Judge James Boasberg put a temporary halt to the construction on some portions of the line, but not the section west of Lake Oahe that contains the sacred Sioux places. 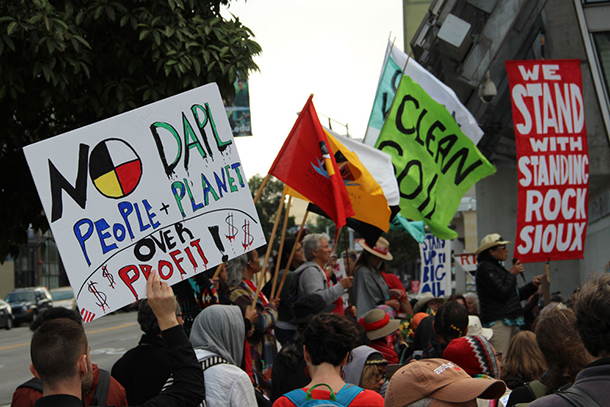 The Sioux and Lakota peoples have received an outpouring of support for their campaign to halt construction on their ancestral lands. (Photo: Peg Hunt, Flickr CC BY-NC 2.0)

GOLDTOOTH: One of the issues that the tribe has raised time and time again is that when the Corps of Engineers was doing their surveys of the land, they never consulted the tribes on it. I mean the tribes are the ones that know where these sacred or cultural significant sites are.

KAISER: That’s Dallas Goldtooth of the Indigenous Environmental Network, an active participant in the Dakota Access protests. He explained that the location of the line under dispute is a choke point for the project.

GOLDTOOTH: Construction has not started across the Missouri. For those of us who have been fighting this pipeline for the past couple of years see the strategic value of stopping it at the river.

KAISER: Some opponents call this pipeline the “black snake” and say it’s proposed to slither about a mile from Sioux territory, but right within traditional lands. Conflict reached a boiling point over Labor Day weekend when builders attempted to kick-start construction, allegedly desecrating tribal artifacts in the process. After heated physical confrontations, the trucks left.

PROTESTOR: This land belongs to the Earth. We are only caretakers. We’re caretakers of the Earth. 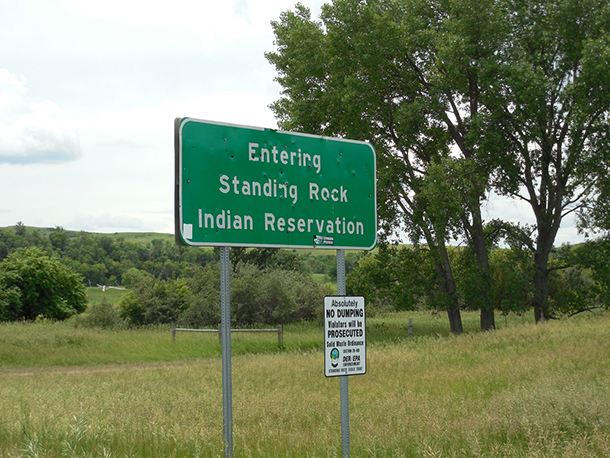 KAISER: But the pipeline fight is a two-sided coin, because it will bring jobs and access to a valuable US resource. Here’s Tessa Sandstrom of the North Dakota Petroleum Council, a trade association that includes pipeline builder Energy Transfers.

SANDSTROM: There will be 8,000 to 12,000 jobs created during the construction, the majority of which will be made up of locals from the North Dakota, South Dakota, Minnesota area. They are working with the laborers unions here to help provide some of those jobs and so it’s really going to be a significant boon, especially during this current downtime.

KAISER: Another argument Tessa Sandstrom offered was that the strong safety record of moving oil via pipeline compares well with other modes of transportation like rail. That can lead to flaring disasters like the Lac Megantic explosion in Quebec that left 47 dead. Here in the U.S., oil rail incidents increased nearly sixteen-fold between 2010 and 2014.

SANDSTROM: And pipelines of course do remain the safest way to transport materials whether it’s crude oil, water, gasoline refined product. They have a very high safety record and Dakota Access particularly is going above and beyond what the Federal government requires to assure that it remains safe to operate and to get our resources out to market.

KAISER: But for activists like Goldtooth, the question of whether to transport oil by train or truck or pipeline is irrelevant. 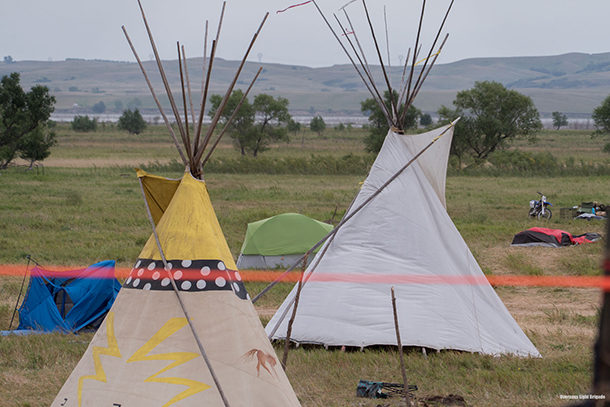 KAISER: The Army Corps and the pipeline company refused comment. In addition to the many federal regulations that the Corps of Engineers is accused of ignoring, approving the project without Native American consent could very well violate international law, including the 2007 U.N. Declaration of Indigenous Rights.

DOROUGH: My name is Dalee Sambo Dorough, and I’m an assistant professor at University of Alaska Anchorage but I’m also an expert member of the United Nations Permanent Forum on Indigenous Issues.

KAISER: Dalee herself is a member of the Inupiaq, or Inuit Alaska Native people, and she believes that the Standing Rock Sioux Nation was not adequately consulted under international law.

KAISER: Dorough says she has not noticed improvement in respect fot the rights of indigenous peoples since the adoption of the UN Declaration in 2007.

DOROUGH: What we’re seeing is an increased number of violations being perpetrated against indigenous peoples not only in North America but throughout Latin America, especially in the area of extractive industries. Unfortunately it’s been a consistent march forward to exploit indigenous peoples land, territories, and resources.

KAISER: That’s what the Standing Rock Sioux Nation and their allies allege is happening in this case, but Dallas Goldtooth says that they will keep fighting.

GOLDTOOTH: We have a lot of faith and a lot of prayer that’s happening in this camp and so I have to trust in that prayer and trust in the collective energy that we all are giving.

KAISER: As they point out, their heritage and sacred places, once destroyed, are gone forever. For Living On Earth, I’m Jaime Kaiser.

CURWOOD: On September 9 the Obama Administration ordered pipeline construction halted in the federal region in question while the Justice Department, Interior Department and Army Corps of Engineers conduct additional reviews.


Standing Rock Lawsuit against the Army Corp of Engineers

United Nations Declaration on the Rights of Indigenous Peoples