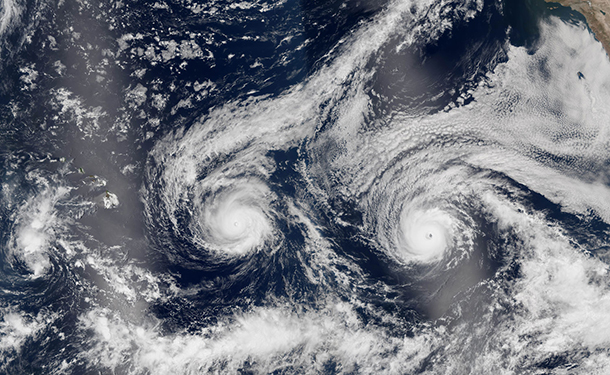 Climate change is already loading the atmosphere with more moisture, increasing the severity of hurricanes and other storms. With simultaneous tropical depressions in the Gulf and the Atlantic, and two hurricanes near Hawaii, meteorologist Jeff Masters tells host Steve Curwood that the familiar weather patterns are gone, and the U.S. may face more extremes in the coming decades.

CURWOOD: From the Jennifer and Ted Stanley studios at the University of Massachusetts Boston and PRI, this is Living on Earth. I’m Steve Curwood. All of a sudden it seems here in North America we are getting a series of unnamed storms seemingly without warning which dumped historic amounts of rain and washed out whole communities. Louisiana is still recovering from the record flooding that displaced thousands from their homes, and as we record this broadcast, Florida, the southeast, and even Hawaii are getting deluged. But even as some regions are getting drenched, others are going dry, leading to yet another intense wildfire season that is incinerated forests from Alaska to Southern California. All this chaotic weather is no mystery for Jeff Masters, the Director of Meteorology for Weather Underground. Welcome back to Living on Earth, Jeff.

CURWOOD: So what I'm noticing recently are all these massive yet unnamed storms like the one that was just so devastating around Baton Rouge, Louisiana. What's going on?

MASTERS: Yeah, the Gulf of Mexico water temperatures are near record levels this summer. We've had water temperatures near 90 degrees Fahrenheit, and when you get that kind of supercharged water in the Gulf of Mexico it makes for supercharged storms. You get a lot of evaporation off the ocean, that means there's a lot of water vapor in the atmosphere that makes for intense downpours.

CURWOOD: So what's leading to all this hot water in the Gulf of Mexico do you think?

MASTERS: The Earth just experienced its warmest year on record. Actually it's been two consecutive warmest years on record and we're going on three. And so you got a background state that's very warm and then on top of that there are some national weather patterns that have resulted in light winds of the Gulf of Mexico so less stirring up of the waters than usual and that allows for them to heat up. 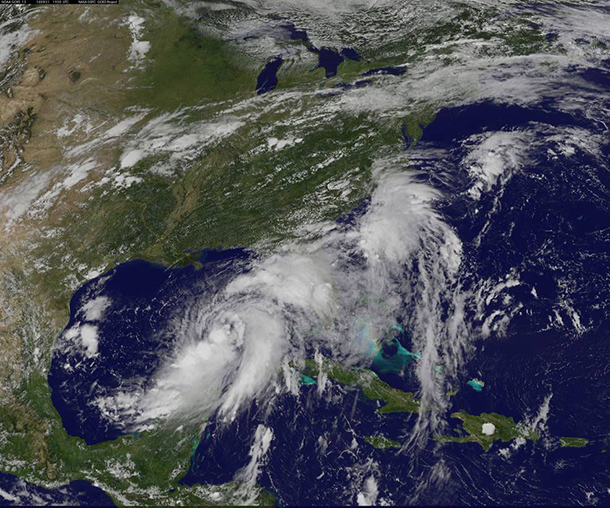 MASTERS: It should be the most intense hurricane season since 2012, the year of Hurricane Sandy, but that's not saying a whole lot since the last three years have been exceptionally quiet, although there have been some storms out there they've been guided by steering patterns in the atmospheric winds that have been shutting them away from the coast. This year looks a little different. We're seeing the steering patterns shift so that the US is more in play now, and we're seeing a lot less in the way of unfavorable sorts of upper level winds that tear these storms apart before they even get started. We expect an above average season, not greatly above-average like 2005, but still it's going to seem like a lot since we haven't seen for many storms last three, four years.

CURWOOD: So, we're talking on the Tuesday, the 30th of August. What do you think will happen with the tropical depression that's currently in the Gulf of Mexico?

MASTERS: But the time you're airing this it could be very well sitting off the coast of the mid-Atlantic or New England generating some high surf along the beaches all the way along North Carolina to Massachusetts. The other possibility is to just go out to sea. I don't think it's going be a hurricane. The system is battling too much in the way of dry air right now. And there's another storm coming across from Africa right now that looks like by this weekend it could get its act together and be the next named storm. We'll see. And we got another system right off the coast of North Carolina right now that's a tropical depression. I'm not expecting much out of that one, although it eventually could get named as well.

CURWOOD: And what's the risk of the Gulf folks getting innundated again?

MASTERS: Louisiana looks like it's going to be off the hook on this one, however, Florida's going to get nailed pretty hard. We're expecting 10 or 15 inches of rain over the next week from this tropical depression that's in the Gulf of Mexico with some isolated amounts up to 15 inches. There's going to be a lot of street flooding. I'm a little concerned about Lake Okeechobee. They'll probably have to start dumping Lake Okeechobee as fast as they can after the storm departs to keep the pressure down on its dikes which are risk of failure when they get too much water behind them.

CURWOOD: And by the way what's the risk of storm surge for Florida? I mean, much of South Florida's only in the scale of a few feet above sea level.

CURWOOD: I also understand that there's a couple of hurricanes approaching Hawaii as we are talking on the 30th of August. And, Jeff, you've written about how climate disruption may be increasing the number of Hawaiian hurricanes. What's the record in the past and why do you think this could happen now? 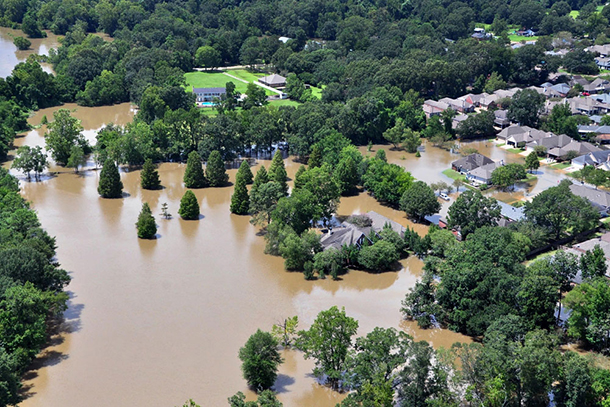 MASTERS: It's really crazy to see two major hurricanes approaching the Hawaiian Islands. They've only ever had five direct hits by either tropical storms or hurricanes since 1949, and two of those hits were in the last three years. And there's two storms that are out there right now, a category three and four. There's never been a case where two major hurricanes have threatened Hawaii, and the reason for the activity over the past few years is just because we crossed a critical threshold. It used to be the waters were not warm enough to the east of the Hawaiian islands to support a hurricane. And just in the past two years those waters are warm enough. Now that's due to a combination of natural patterns which we call El Niño and the PDO or Pacific Decadal Oscillation, but that's combined with the overall ramp-up of global temperatures causing warming of the oceans all over the world. So, now you can get hurricanes that affect Hawaii before you couldn't.

CURWOOD: OK, what is the link between hurricanes and climate change?

MASTERS: Hurricanes are heat engines which means they extract heat energy from the ocean to convert it to the power of wind, and the warmer the ocean is, the stronger a hurricane can get if all other conditions that it needs to exist are present. So, can scientists are confident that as we continue to heat up the oceans, we're going to see more of these high-end perfect storms. The strongest storms are going to get stronger, and we're going to see a few storms with 200 plus miles per hour sustained winds like we saw you last year off the coast of Mexico with Hurricane Patricia. It had sustained winds of 215 mph. That was a world record for the strongest winds ever observed in a hurricane. So we're talking about tornado scale winds on a hurricane scale which means a diameter 20, maybe 30 miles across would get those kinds of destructive levels of damage that we usually only see in a tornado. 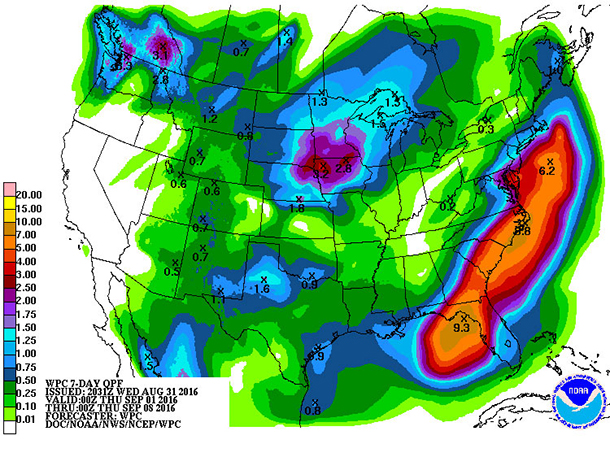 Expected rainfall totals across the continental United States from September 1-8, 2016 (posted August 31st), show that parts of Florida and the Eastern Seaboard could get up to 10 inches of rain. (Photo: National Weather Service, CC government work)

CURWOOD: Sounds very scary. Now, you've been in the meteorology business for what 20, 25 years now?

CURWOOD: To what extent did you think that you would see the kind of events you're seeing right now when you began your career?

MASTERS: Not at all. I remember in the 80s when I was first a training as meteorologist, it was very cut and dried. I mean, I knew going into winner that we were going to have a couple solid months there in Michigan of below freezing temperatures. Yeah, maybe we would get a little thaw in January where it would get about 40 for a few days, but very very consistent. And that has been totally turned on its head now. I don't recognize the climate anymore. I mean I look at the weather maps in the morning sometimes afraid of what I'm going to see. It's just gotten so insane. The climate of the 20the century is gone. The climate I knew is not here anymore. We're in an entirely new climate regime, and it is extremely intense. 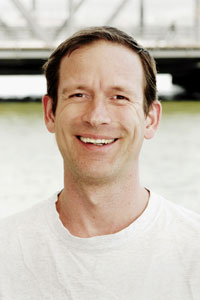 CURWOOD: So you’re saying you don't recognize weather patterns anymore, and to what extent do you think that is just going to continue to be this way?

MASTERS: It probably will accelerate for the next couple of decades and then it is my guess that it will level off some. The pace of change right now is at a maximum. The amount of carbon dioxide we're putting into the air is still increasing each year and that's going to keep the acceleration rate of the change in the weather systems going. But at the same time, in a few decades, the ocean temperatures are going to be well beyond what they are now, and we're going to see some really extreme storm behavior I think. Even once it does start to level off, it'll level off at this extreme level that is going to be difficult for society to adjust to.

CURWOOD: Jeff Masters is Director of Meteorology with Weather Underground. Thanks so much, Jeff, for taking time today.

FiveThirtyEight: “One Hurricane Is Rare In Hawaii, And The State Might See Two This Week”

NOAA analysis on the link between climate change and Atlantic hurricanes

Track storms on the National Hurricane Center website from NOAA