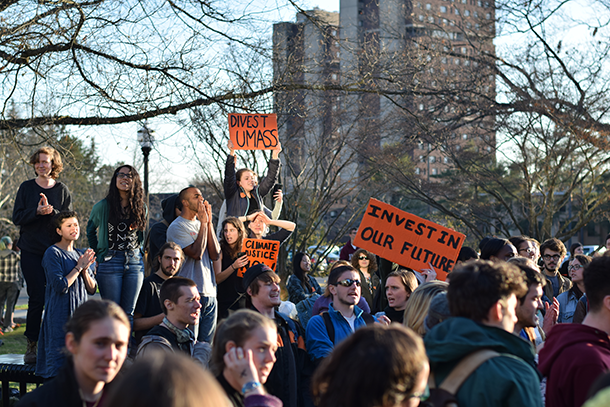 UMass Amherst students gathered outside of the Whitmore administration building on April 13, 2016, as 19 students who had participated in a sit-in were arrested and escorted out by university police. The University has now decided to fully divest from direct investments in fossil fuels. (Photo: Katherine Mayo / Daily Collegian)

The University of Massachusetts has decided to divest the five-campus system’s endowment from direct holdings in fossil fuels. President Marty Meehan tells host Steve Curwood how student activism, and a desire for moral leadership led the university to divest.

CURWOOD: From the Jennifer and Ted Stanley studios at the University of Massachusetts Boston and PRI, this is Living on Earth. I’m Steve Curwood. It’s our partner the University of Massachusetts that kicks off our program today, as it has become the first major public university system in America to pull direct investments in fossil fuels out of its $800 million endowment. UMass joins a growing movement that has seen public institutional funds worth more than $2.6 trillion fully or partially divest from climate damaging fuels, including the Rockefeller Brothers Fund, Stanford University, the Leonardo DiCaprio Foundation and two of the world’s biggest pension funds in California. University of Massachusetts President Marty Meehan says this landmark decision is key to the university’s broad program to address the existential threats of climate disruption, and he joins us now to explain. Welcome to Living on Earth, Marty.

MEEHAN: Thank you. Delighted to join you. 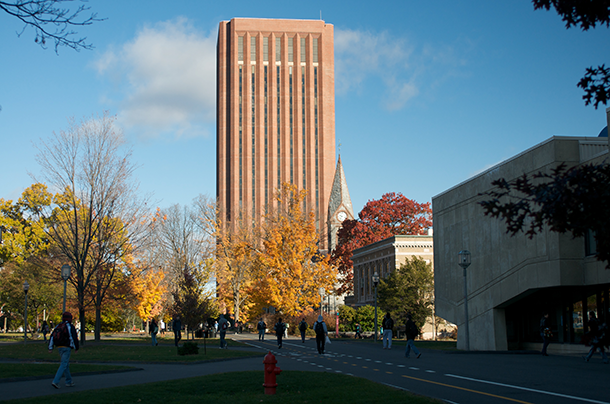 CURWOOD: So, how does it feel to be the first major public university to make this step?

MEEHAN: It feels good. I think this action is consistent with the principles that have guided our university since its land grant inception, and I think it reflects our commitment to take on the environmental challenges that confront us as a country and confront our world. I also believe that higher education institutions have an obligation to show leadership on moral issues facing our society and because of the impact on future generations, I think climate change is such an issue.

CURWOOD: What's the timeline here? How soon can we expect to see the University of Massachusetts actually sell off these shares?

MEEHAN: Well, when we talk to students they outlined kind of a five-year plan, but I think that we would be able to do that sooner than that. And in terms of how much money it affects, it depends on the given day that you check in with all our accounts. It could be anywhere from $5 million to $8 million. I think the most important number is the fact that there will be no future investments, so that while the amount of money that's invested in fossil fuels might go up and down prior to this decision, now we know it's only going one way which is down and there will be no future investments in any fossil fuels.

CURWOOD: So, talk to me about your process. When did you begin having conversations about this and how has your thinking evolved? 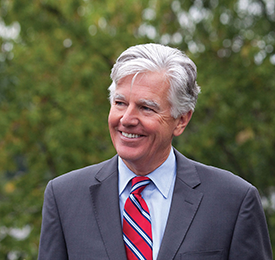 CURWOOD: How much of a role did student pressure play in this decision? I know there was an active divestment campaign particularly at the University of Massachusetts at Amherst. I think more than 30 students were recently arrested there for occupying an office demanding divestment.

MEEHAN: It played a role. Any time students protest, I think it's fair to say that presidents and chancellors pay attention, and I know that Chancellor Subbaswamy at UMass Amherst, they got his attention. He talked to me about it and I had a conversation with students on the phone and then ended up driving out to Amherst to have a meeting with them. So I think it played a pretty important role. I mean, the fact is we weren't actively engaged in going to the foundation for direct fossil fuels investments and here we now—we are the first major public university in America to divest direct fossil holdings. So I think the students played a very important role.

CURWOOD: So, in the end, why do you think you decided to take this step?

MEEHAN: Because I think it sends the right message. I think universities should send the right message. I've talked to some folks who have said, “well is it really symbolic?” Well, I think symbolism is actually important. The university embraces the advantages of sustainability efforts every day on their campuses throughout research, our academic programs, our student engagement, our own energy policies. I hear some people say, "well, can you have more of an effect by, for example, we’ve reduced greenhouse gas emissions by 17 percent?" At Amherst, we've reduced emissions by 23 percent. Well the symbolism is important, too. So I think it's important universities such as the University of Massachusetts really address this from all angles, and I think symbolism in this case is important, and it got our students actively engaged and I think that's a good thing.

CURWOOD: Now, some money managers and other institutional leaders make the case against divestment, they argue that they have more power to influence the direction of fossil fuel companies if they still have a voice in the boardroom as shareholders. What do you say to that?

MEEHAN: Well, I say in this instance, a public university, a land grant university, it seems to me should be willing to do more than that. And I look at, for example, UMass Amherst ranked 21st in the 2015 addition of the Princeton Review's guide to 353 green colleges. If you promote yourself as a green university, I think it makes sense to take a further step and I would rather the University of Massachusetts be a leader rather than somebody that follows.

CURWOOD: To what extent do hope that other universities are going to follow suit here?

MEEHAN: Well, I think they will. I think this is a movement that has momentum. I think it's an issue that's not going to go away, and research universities in particular are very very important in terms of divesting but also in terms of increasing the use of renewable energy. I'll give an example, at UMass we've entered into 15 separate solar contracts with 10 different solar developers, so I think universities are already doing a lot of things but I think this divestment, I don't think it's going to go away and I think there will be more pressure from universities around the country to divest. And again divesting is only one small piece of the overall picture here. It's important for universities like us to continue to engage in academic programming and researchers that create next-generation thinking and technologies.

CURWOOD: So, what kind of response have you had from students, alums, perhaps even prospective students who might be attracted by UMass's divestment?

MEEHAN: Well, first of all, the students were very enthusiastic about it. I think they felt a sense of accomplishment. Prospective students are just as happy about it and I think that it may actually enable us to get more students who are environmentally friendly in thinking about global warming and thinking about issues of energy. In terms of alums I will say that there's some alums who want to make sure that we're maintaining policies with investment that will grow the endowment. One of the reasons why a lot of alums were investing in the University of Massachusetts is they believe it's critically important that the UMass grow its endowments so we can provide scholarships for students who want to attend the University of Massachusetts because as the cost of education goes up in many instances the amount of state support for public higher education goes down. Endowments play a very important role in leveling the field and making sure that a world class education is accessible to everyone, which means we needed the endowments and the scholarships that are provided to students to go up and certainly not down. So we have heard from our many alums that say, “make sure those investments are going to get the highest return possible.” 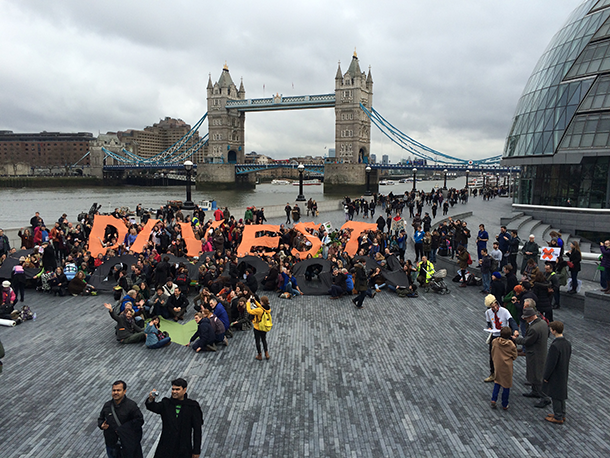 The fossil fuel divestment movement is not limited to the United States -- here, a group of divestment activists gathers in front of London’s Tower Bridge. (Photo: Alex, Flickr CC BY-NC 2.0)

CURWOOD: Of course, over the short term, fossil fuel investments have underperformed in the market, so they must be happy.

MEEHAN: Yes they have. And I think that's a trend by the way that we'll continue. I think as we invest more in alternative sources of energy, I think that we're going to continue to see investments in fossil fuels going down.

CURWOOD: So where is the money that was being invested in fossil fuels going to go now?

CURWOOD: Marty Meehan is President of University of Massachusetts. Thank you so much for taking your time with us today.

MEEHAN: Thank you very much.


University of Massachusetts on its divestment from fossil fuels

Bloomberg: “University of Massachusetts to Divest From Fossil-Fuel Holdings”