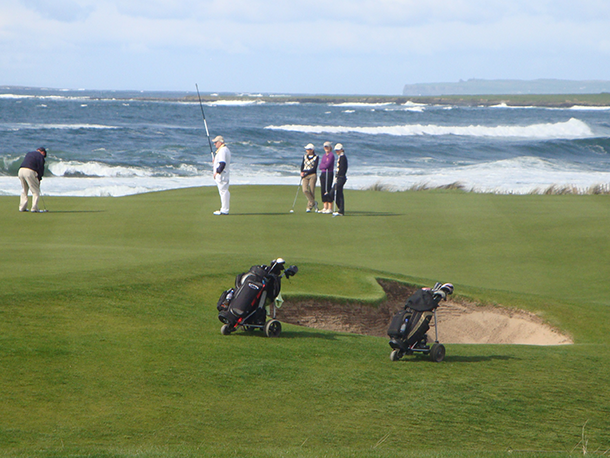 Republican Presidential candidate Donald J. Trump says he’ll build a wall along the U.S.-Mexico border to block undocumented immigrants. Now Trump is planning to build another wall, this one to hold back rising seas at his luxury golf resort in Ireland. POLITICO’s Ben Schreckinger tells host Steve Curwood how the Trump Organization specifically cites climate change as a reason to build this wall, despite the real estate mogul’s avowed climate skepticism.

CURWOOD: From the Jennifer and Ted Stanley studios at the University of Massachusetts Boston and PRI, this is Living on Earth. I’m Steve Curwood. Republican presidential candidate Donald Trump has famously promised to build a wall along the U.S.-Mexico border to stem the tide of illegal immigration from and through Mexico. Now there’s news that the billionaire wants to build another wall, but this time it’s not in response to human desperation south of the border, but in response to humanity’s degradation of Mother Nature. Ben Schreckinger of POLITICO reported on Mr. Trump's plans and joins me now. Ben, welcome to Living on Earth.

SCHRECKINGER: Hey, Steve. Thanks for having me.

CURWOOD: What is this wall you're talking about, Ben?

SCHRECKINGER: This is a seawall. It would be about 200,000 tons of rock along about two miles of beach at Trump’s seaside golf course in County Clare, Ireland, where they are suffering from some erosion.

CURWOOD: What is this erosion related to? It couldn't possibly be global warming, could it?

SCHRECKINGER: Funny you should ask that. That is it exactly one of the big things that's exacerbating this erosion. Trump's firm admits as much and in a filing they made to the local County planning board in County Clare, Ireland explicitly saying that global warming and its effects are going to make this erosion worse over the course of the coming century and basically are one of the chief reasons they need to build this wall. 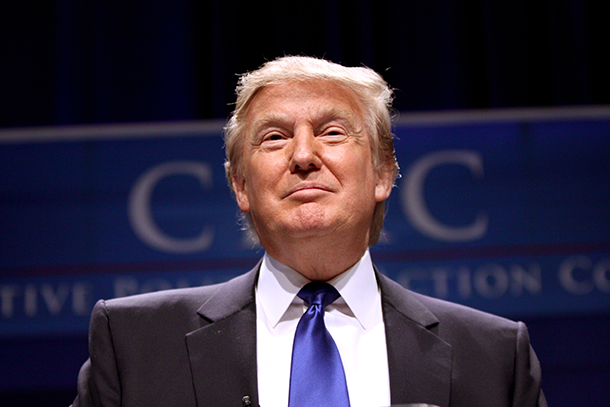 CURWOOD: So, to be clear. Mr. Trump has told Irish zoning authorities, sea front authorities, that his company is concerned about the threat of global warming climate change and therefore needs to build a wall.

SCHRECKINGER: That's right. Specifically in this filing that they made to those authorities they say that a likely increase in the rate at which sea levels rise over the coming century, and more importantly an increase in the strength of storms, are going to contribute to this erosion.

CURWOOD: By the way, where are these golf links? What sort of territory are they in in Ireland?

SCHRECKINGER: They're on the west coast of Ireland and they are just south of Galway, which is a popular tourist destination on the other side of the island from Dublin.

CURWOOD: And how did you find out about this?

SCHRECKINGER: I've been following the story of this wall for some months in Irish media reports and then I've been looking deep into government filings where I discovered exactly how Trump's firm is arguing that they need to build this wall.

CURWOOD: To what extent has this golf course already been impacted by climate change? 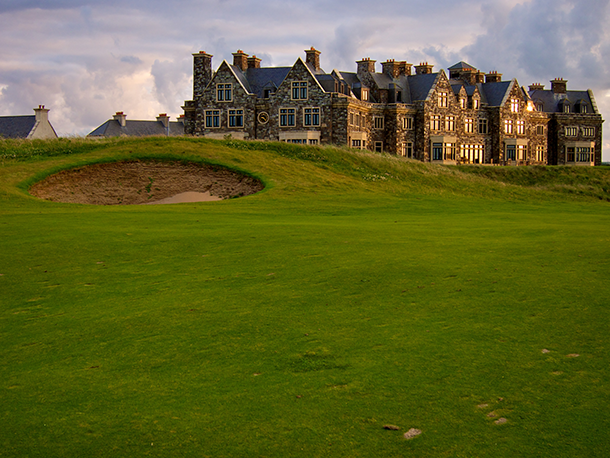 The Trumps say they have invested $50 to $60 million on the Doonbeg golf course and are prepared to spend more. (Photo: Colin Harris, Flickr CC BY-NC-ND 2.0)

SCHRECKINGER: Well, right actually when Trump bought it, it had suffered really terrible erosion in the winter of 2013 and ’14. It was an unusually stormy winter, the kind of weather that people would point to climate change as a culprit in, and he suffered… some parts of that golf course, 10 meters of erosion of frontage just over the course of just that winter.

CURWOOD: That's like a scale of 30 feet. That's, that's a lot of frontage.

SCHRECKINGER: That's right, there was one storm really just days before Trump closed this purchase that took away six to eight meters in the course of just a day.

CURWOOD: Refresh our memories here. What has Mr. Trump said in the past about climate change in his campaign?

SCHRECKINGER: He's been for years, before he even was running for office, a very outspoken denier of climate change, skeptic of the scientific consensus, however you want to label it. He at one point tweeted that climate change was a hoax created by the Chinese to harm US manufacturing. He’s since said that was a joke, but he’s also called global warming “BS” - He didn't abbreviate that term - He's called it pseudoscience. And more recently his statements have grown more complicated, I would say. He says things like, “I'm not a believer in man-made global warming. The weather is changing, it’s always changing.”

CURWOOD: Last week on our program we reported that he would walk back the Paris accord in a minor way, perhaps or even in a major way - Not very clear about that - but really didn't think that the nations of the world getting together to address climate change was a worthy cause.

SCHRECKINGER: That's right. Trump, whatever the international deal is, has called for renegotiating it. Whether that's the climate accord in Paris or the Iran nuclear deal or our trade deals, the global order including the global consensus on climate change would be up in the air under a Trump presidency. 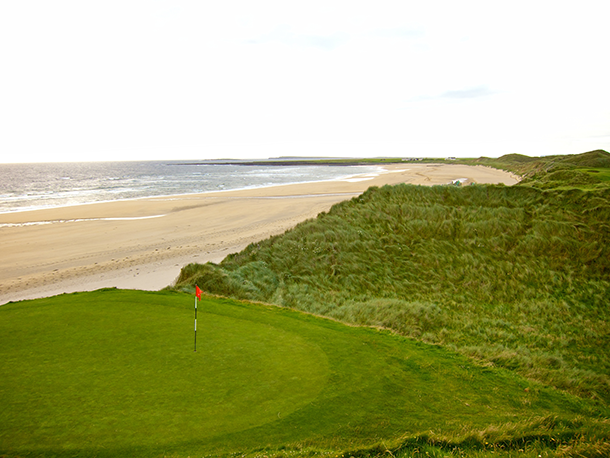 Trump International Golf Links Ireland has told regulators that without erosion mitigation, Doonbeg golf course could lose up to 100 meters of ground in some places before 2050. (Photo: Colin Harris, Flickr CC BY-NC-ND 2.0)

CURWOOD: Now, given that in round numbers, about two thirds of Americans describe themselves as worried, concerned about global warming, either a great deal or at least a fair amount, how do you think Mr. Trump will need to address global warming during the presidential general election?

SCHRECKINGER: That's a good question, and Trump's position, as you pointed out, does put him out of step with two thirds of the electorate. At the same time, we haven't really seen many people voting on the basis of climate change as an issue. We've seen advocacy groups try to make this an issue that people are voting on. So far they've had very little success doing that. Certainly people are going to keep making an issue out of this inconsistency in Trump's statements, and it's probably a problem for him not only on the issue of climate change, whether he takes it seriously enough, but also on sort of the broader perceptual issue as Democrats pick up where Marco Rubio left off, try to tag Trump as someone who's misleading the American people. The inconsistency here between what is doing to protect his holdings and what he says everyone else should be doing has the potential to feed into that narrative.

CURWOOD: You're not popular with the Trump campaign, Ben. As I understand it in March they yanked your credentials, kicked you out a press conference in Florida. Why doesn't Mr. Trump want you reporting on his activities?

SCHRECKINGER: That's a good question. I suppose I wouldn't care to speculate. If you were to ask Trump from what he said is that I am a dishonest third-rate reporter. He said publicly, at least, that I write very poorly and incorrectly, although privately has told me that he does respect my writing abilities. What's clear is that Trump and some people in his campaign don't want me near the campaign, don't want me near the candidate.

CURWOOD: And now Mr. Trump has frozen you out of all of these events. How's your job security? 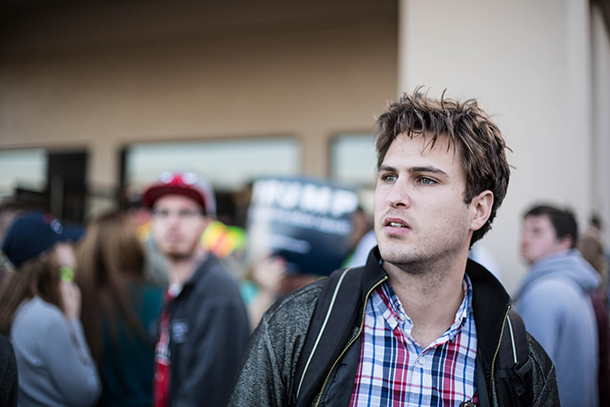 Ben Schreckinger is a reporter with POLITICO (Photo: courtesy of M. Scotty Mahaskey)

SCHRECKINGER: [LAUGHS] My editors have been fantastic about standing behind me, supporting me. They understand that Trump plays rough with reporters, and has been doing it for decades, often unfairly, as I believe as he's doing in my case. Right now, Trump has a private press charter. I'm flying commercial following him around the country. I'm actually in Albuquerque right now where I'll try to cover his rally tonight as a member of the general public.

CURWOOD: What response if any have you received if any from the Trump campaign regarding your story that his company is saying that climate change endangers his golf resort in Ireland?

SCHRECKINGER: I reached out multiple times to his spokeswoman, Hope Hicks. I didn't get a response. I reached out to Alan Garden, who is the general counsel of the Trump organization. I did not get a response. I suspect that in the coming days Trump will be asked about this in interviews, but so far mum’s the word from both Trump's business and his campaign.

CURWOOD: Ben Schreckinger is a reporter from POLITICO. Ben, thanks so much for taking the time today.

SCHRECKINGER: Sure thing, thanks for having me.

Listen to our earlier story about Donald Trump’s climate skepticism