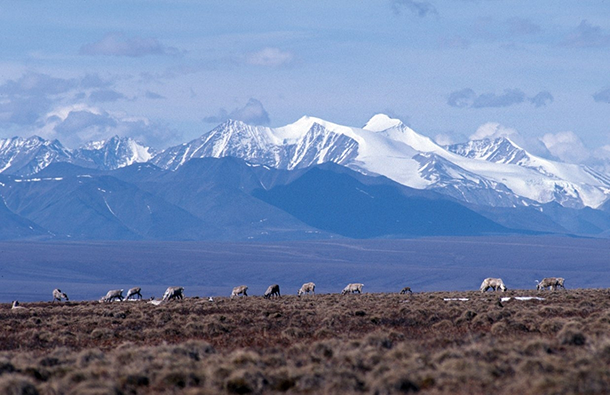 The Arctic National Wildlife Refuge (ANWR) covers nearly 20 million acres, containing five distinct ecological regions. Here, caribou graze on Alaska’s coastal plain with the Brooks Range in the distance. The calving grounds of the Porcupine Caribou Herd are in the coastal plain area, and some biologists fear that oil exportation and production in the region would put the herd at risk. The Porcupine Caribou Herd’s annual migration of 1500 miles between ANWR and the boreal forests of Alaska and northwest Canada is considered to be the longest of any land mammal on the planet. (Photo: USFWS; Flickr CC BY 2.0)

President Obama wants millions of acres of the Arctic National Wildlife Refuge, including the oil-rich Coastal Plain, protected as wilderness. Meanwhile he’s opening other parts of the Arctic and Atlantic coast to energy development. Alex Taurel, Deputy Legislative Director of the League of Conservation Voters, discusses the importance of these developments with host Steve Curwood.

CURWOOD: From the Jennifer and Ted Stanley Studios in Boston and PRI, this is Living on Earth. I’m Steve Curwood. President Obama is expected to veto the Keystone pipeline legislation, but at the same time he’s offering some parts of the Atlantic coast and Arctic Ocean to off-shore oil and gas exploration. But he wants to curb drilling in highly sensitive areas of Alaska, by taking parts of the Chukchi and Beaufort Seas off the oil leasing market, and asking Congress to grant wilderness status to vast new areas of ANWR, the Arctic National Wildlife Refuge. This would give the highest degree of federal protection to most of ANWR, including 1.5 million acres of the oil and gas-rich Coastal Plain. But the Republican-led Congress is unlikely to go along. Alex Taurel is Deputy Legislative Director with the League of Conservation Voters. Welcome to Living on Earth.

TAUREL: Thanks for having me on, Steve.

CURWOOD: So what kinds of wildlife and pristine environment has President Obama proposed to protect with this wilderness designation? Paint me a picture, please.

TAUREL: Sure. This is an absolutely vast wild place up in the northern part of Alaska, the Arctic National Wildlife Refuge. It encompasses five distinct ecological regions. You've got the kind of beaches and salt marshes of the coastal marine areas, where you’ve got polar bears; the broad expanses of the coastal plain where you've got the Porcupine Caribou herd roaming; the windswept alpine tundra up in the Brooks mountain range. Beyond those you've got some some highlands where the Arctic plants kind of transition over to the boreal forest, and then in that forest you’ve got that spruce, birch, and aspen trees – home to more than 200 species of birds. It's an absolutely stunning landscape and home to the most diverse population the wildlife in the entire Arctic

CURWOOD: This has been a long-running controversy because there's a lot of oil in the Arctic National Wildlife Refuge. Why try to get a Republican Congress to approve this now?

TAUREL: So, the timing of this is that every 15 years all the wildlife refuges are supposed to do these management plans, so they're supposed to do these studies. So they took an inventory of all of the values, all the biology, the animals, the plants, and really came out with the recommendation that this place is worthy of our highest level of protection for public lands and that's a Wilderness designation. So they're going to be managing it to make sure that it maintains that wild character, and the President is recommending to Congress, which is the only body that can actually designate formal Wilderness, that they go ahead and pass a bill that does that. We're not terribly optimistic that this Republican Congress is going to take up the President's recommendation that they make it Wilderness, but that's where the science is, and we do hope that they act. 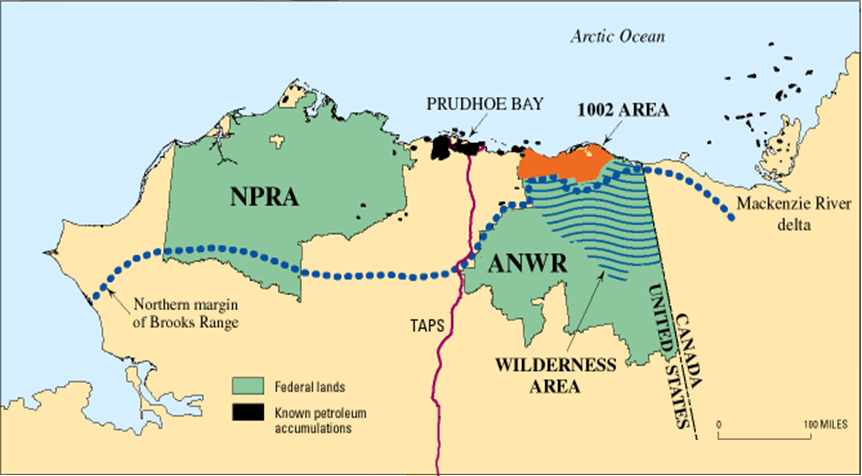 The Obama Administration recently proposed to designate about 12 million acres of the Arctic National Wildlife Refuge’s 19 million acres as wilderness. Seven million acres of ANWR are already wilderness. Some Alaskans oppose this, wishing to allow the drilling for fossil fuels here. Nearby the National Petroleum Reserve in Alaska already allows for oil leases, but few companies have taken advantage of opportunity. (Photo: USGS)

CURWOOD: Now, for the record part of the National Wildlife Refuge is already wilderness, right?

CURWOOD: And this move would make it how much bigger?

TAUREL: It would make the vast majority of those 19 million acres into Wilderness.

CURWOOD: Now, the senator from Alaska, who's also the Chairwoman of the Senate Energy Committee, Lisa Markowski, was so - well outraged over this news. She said that this move amounts to economic warfare against her state. How can the representatives from Alaska and the administration come together on an agreement as to how to balance the economics here and the value of the environment?

TAUREL: Well, I think there's a balance being struck up in Alaska. I mean, Alaska is one of the biggest oil producers among the United States, and you know, just this week the President - to our regret - announced some new lease sales up in Arctic Ocean north for the Arctic refuge. They're holding annual drilling lease sales up in the National Petroleum Reserve right next to the Arctic National Wildlife Refuge. There's lots of other drilling happening on State lands up in Alaska, so plenty of that is going on, and what we're saying is do we want to sacrifice this absolutely stunning priceless landscape when there are other oilfields available and we really ought to be looking at alternatives to just oil drilling. Can we be more energy efficient? Can we turn to wind and solar which has been growing in a big way? Don't feel like that's a trade-off that we need to make at this point? 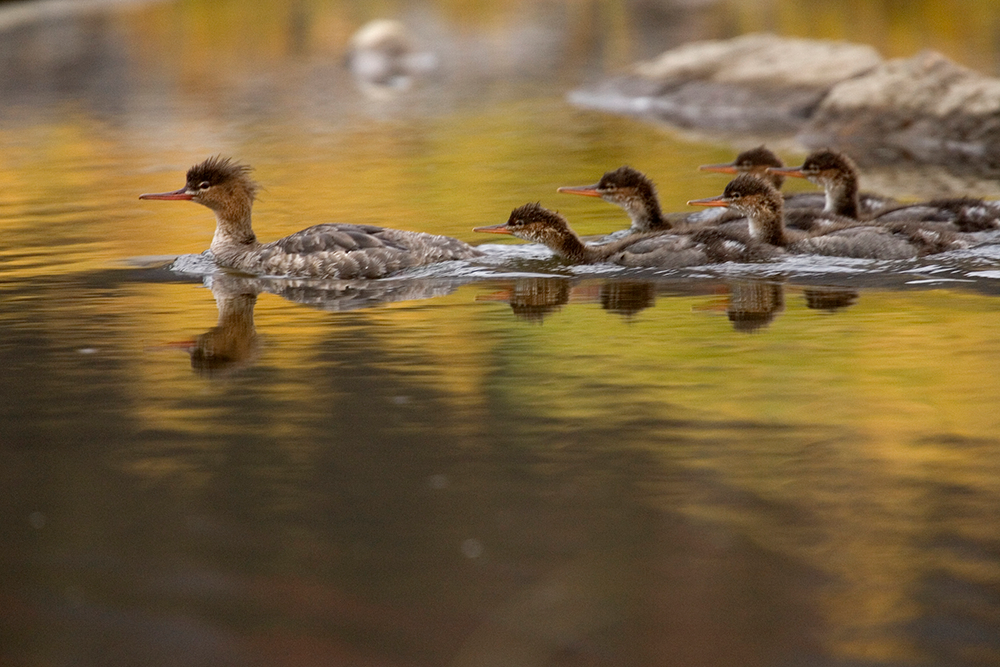 CURWOOD: What sense does it make that the President is offering oil leases, oil and gas leases, off the Atlantic coast?

TAUREL: Well, look, I think we need to take a step back and look at kind of our broader energy policy. We've got a problem with climate change that we need to address and the President has been taking more steps than than any President in the history of United States. We wish that some areas of this plan that he put out on offshore drilling weren't included in the draft plan. The Atlantic is a place that lots of people live, they go fishing, they go to the beach. Those areas are at risk based on what we've seen from the BP oil spill. That oil is unfortunately not containable, it spreads far and wide and so lots of people's beaches are unfortunately at risk if that drilling were to go ahead. And then there's also drilling that will be happening up in the Arctic Ocean that we're also concerned about the impacts to the wildlife and the Alaskan natives that do subsistence fishing and hunting up there. So we think he's done a lot, but we hope that as this kind of draft offshore drilling plan goes forward that they pull some of those areas back and recognize that spills are just putting too much of our beaches and coastal economies at risk.

CURWOOD: Before you go, Alex, what kind of legacy is President Obama creating for himself with these moves regarding the Arctic National Wildlife Refuge and other items? 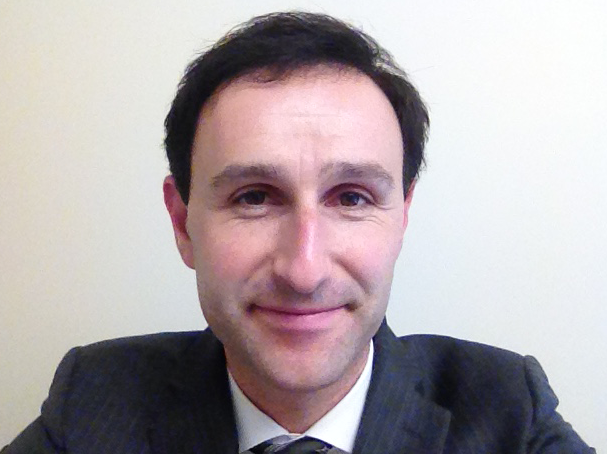 TAUREL: There's no doubt that he's going to be going down as is one of the greenest Presidents that we've ever had. His legacy on climate change is absolutely assured, and on the conservation front, the Wilderness recommendation for the Arctic refuge really plays into a growing conservation record that's been really strong, in particular of late. He's been designating national monuments, which is what's in his authority to protect public lands, and we've seen some really awesome landscapes protected in southern New Mexico at the Oregon mountains, outside of Los Angeles at the San Gabriel Mountains, he's designated an expansion of the largest marine national monument out in the kind of remote Pacific islands. So doing an absolutely fantastic job on conservation and protecting some really special places that we've inherited and making sure that they're available for future generations, and doing that a time when you’ve got Congress not doing very much to protect special places, but in fact interested in opening them up to development, so a real legacy that that he's been establishing on conservation as well as climate change.

CURWOOD: Alex Taurel is the Deputy Legislative Director with the League of Conservation Voters. Thanks, Alex.

TAUREL: Absolutely. Thanks, Steve, for having me on.

More about the Oil and Gas Leasing Program