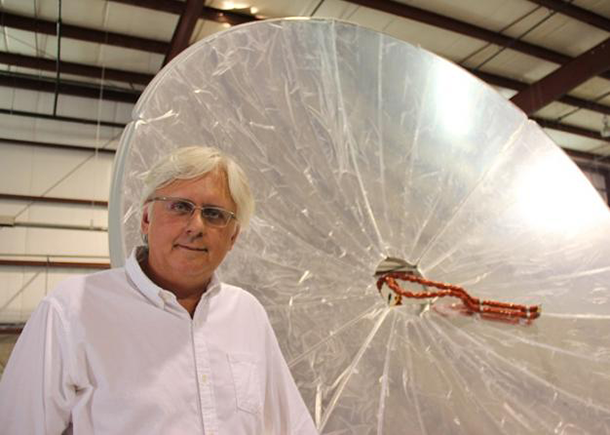 Oil and gas fracking produces huge volumes of dirty, difficult to handle wastewater. Now businesses are developing technologies to clean it up. But Reid Frazier of the Allegheny Front reports profits can be elusive.

CURWOOD: Hydraulic fracturing for oil and gas produces a huge amount of dirty water, and it has to be disposed of, often down an injection well. But a number of businesses are working on technology to clean it up. As the Allegheny Front's Reid Frazier reports, that's a big challenge.

FRAZIER: Inside a big industrial building not far from downtown Pittsburgh, Mike Broeker shows off what he hopes is the next big thing in cleaning up the fracking industry.

BROEKER: You can see it here. This has a covering on it, but this is a kind of a vinyl type material that does have some flexibility to it that allows you to get about 95 percent reflectivity.

FRAZIER: That reflectivity is crucial. The company is called Epiphany Solar Water Systems. It uses solar energy to distill clean water. The company was started a few years ago to clean up drinking water in the developing world. But then something else came along.

BROEKER: And then came the Marcellus shale opportunity.

FRAZIER: Each well that’s fracked in the Marcellus Shale in Pennsylvania produces about a million gallons of dirty water, and you can’t just flush this down the drain. Fracking companies are re-using a lot of this for other frack jobs, or they’re sending it to deep injection wells, often in Ohio. But injection comes with its own problems, like earthquakes. So cleaning the water up could make financial and environmental sense.

FRAZIER: Epiphany re-worked its technology to deal with this fracking waste water. Epiphany’s system uses those satellite dishes and converts them into intense solar heat collectors. Through a series of pipes, it heats up the dirty frack water in a contraption the size of a dorm fridge.

FRAZIER: It’s basically a still, the same contraption bootleggers use to make moonshine.

BROEKER: The same concept. It is distillation.

REID: They make whiskey but you guys make… 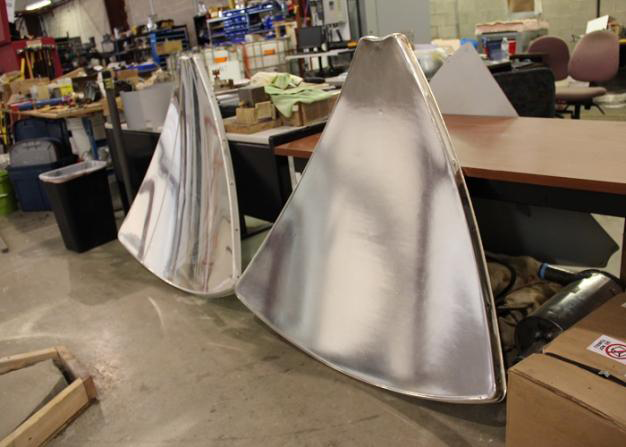 FRAZIER: Broeker hopes the company’s contraption will be deployed on well pads throughout the Marcellus shale and other places. It’s already got three in the field with different gas companies, though he can’t say which ones. The system is designed to clean up produced water, that’s the water that flows out of a well continuously along with gas and other liquids after it’s been put into production. That water has been sitting underground for hundreds of millions of years, and that makes for a headache to clean up.

BROEKER: You’ve got water that has a tremendous amount of salt in it, about 18 percent salt, by example the ocean has about three to four percent salt.

FRAZIER: Salt destroys equipment, so Epiphany has had to use materials that won’t corrode. The salt also presents a challenge to other technologies Epiphany is competing with. Reverse Osmosis for instance uses a membrane, essentially a filter, to strain the salt out of seawater. To get the water through the membrane, you have to apply pressure to it, but the saltier the water, the more pressure you need.

MAUTER: the issue is that with flowback water and produced water, the salinity is so high you have to push very, very hard, and that risks rupturing the membrane.

FRAZIER: Meagan Mauter is an engineer at Carnegie Mellon University. Mauter’s team has created a special membrane that will allow water vapor to go through it, but no liquids. Dirty water stays back, clean vapor travels through.

MAUTER: Ah, there it goes.

FRAZIER: In her lab at Carnegie Mellon, Mauter shows how the system works.

MAUTER: There is now water coming out of this reservoir, coming in here, across the membrane, and then discharging back there.

FRAZIER: Salty water is heated up and piped to a tiny membrane, a small white semi-circle of plastic cloth. On the other side of the membrane there’s cold water, so through simple condensation, clean water flows out of the system. The key though is getting the membrane just right, Mauter says. 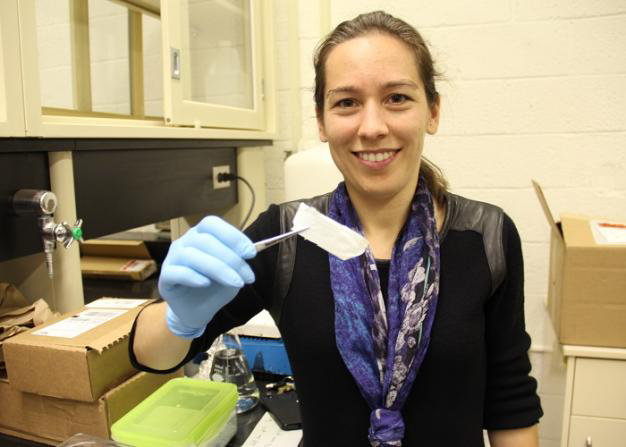 MAUTER: So this particular sample is a millipore membrane. It’s very similar to the polymer that is used to make Gore-Tex.

FRAZIER: Mauter says she’s a long way from having a product that can be commercialized. But if there is ever a machine that can clean up frack water cheaply, some think it will have no shortage of buyers.

FRAZIER: The research firm Lux found the market for waste water treatment from oil and gas is about $1 billion right now, and it could grow to $9 billion by the next decade. But not everyone thinks that these new technologies will ever make money. Brent Giles studies the water market for Lux. He says a lot of startups got into the market thinking they could solve the frack water problem.

GILES: A lot of the start-ups that we see in produced water, in flowback water, are fairly naive, and they’ve got a solution and as soon as they started seeing frack water issues show up in the New York Times and newspapers like that, they kind of did a 180 and decided that they were going to become experts in the oil and gas space, and that hasn’t worked out for a lot of them.

FRAZIER: Why hasn’t it worked out ? Well, Giles says, it’s the water.

GILES: In the Marcellus, most of these technologies, these more advanced technologies have utterly failed to treat the water. It’s such low quality water that the technologies crash and burn when they try to treat it.

FRAZIER: In contrast, companies that use more low-tech solutions, like prepping the wastewater to be re-used in future frack jobs have been much more successful. Part of the problem is that the type and quantity of water produced in oil and gas wells changes over the lifetime of a well. There’s a lot of water that comes out during fracking. After the well is fracked, the well goes into production. During that period, the water that comes out of the well gradually gets saltier and saltier over time. Also there’s a lot less of it than when it’s getting fracked. So creating a technology to treat all those scenarios is difficult. Giles says it’s just cheaper and easier to reuse that frack water or inject it underground.

FRAZIER: Broeker of Epiphany Solar Water says his company is already meeting the price point the industry wants. And others say those prices are subject to change. Annie Lane is with the research firm Battelle. Lane is working on a reverse osmosis system that uses multiple membranes.

FRAZIER: Lane says she’s getting more interest from oil and gas companies in technologies like hers that can deal with this dirty water.

LANE: They see continued use of injection wells actually as being threatened due to possible changes in policy so they’re interested in identifying alternatives.

FRAZIER: She thinks one day the water will be more valuable cleaned up and above ground, than pumped down a hole. I’m Reid Frazier.

CURWOOD: Reid’s story comes to us from the public radio program, the Allegheny Front.


Read more about this story on Allegheny Front’s page

Wastewater injection into the ground can cause earthquakes.

Research estimates oil and gas wastewater management is a $1 billion industry, and could grow to $9 billion by next decade.

Meagan Mauter is a chemical engineer at Carnegie Mellon University.