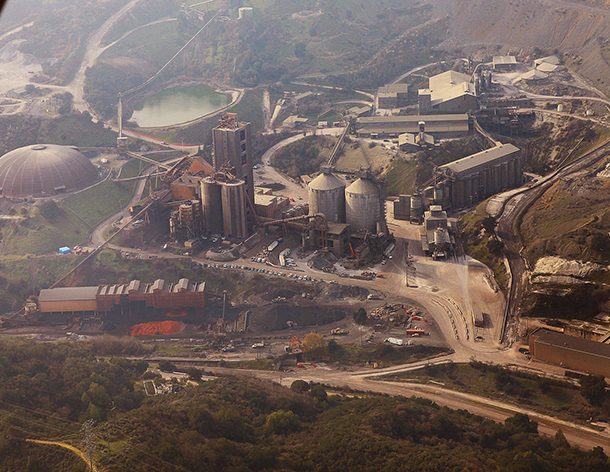 Companies are finding ways to turn industry-generated waste CO2 into a profitable business. Acting Assistant Secretary of Energy Christopher Smith tells host Steve Curwood why the DOE is investing in such ventures, including Skyonic’s, which October 21 started recycling CO2 from a San Antonio, Texas cement plant into chemicals such as baking soda and bleach that can be sold at a profit.

CURWOOD: It's Living on Earth. I'm Steve Curwood. A Texas company has launched one of the first commercial operations to capture CO2 and recycle it into commodities, including baking soda. The Skyonic Corporation flipped the switch at a cement plant in San Antonio on October 21, and in a year expects to capture some 75,000 tons of global warming CO2, and turn it into industrial liquids and solids to sell at a profit. Skyonic says its process can also be used to recycle carbon from power plants. The US Department of Energy invested $28 million in the venture, and its acting assistant secretary, Christopher Smith, told me why.

SMITH: Over the last few years, we’ve committed over $6 billion to put in place real world projects that are taking CO2 that otherwise would be going into the atmosphere and capturing it and putting it to beneficial use, so that helps offset the cost of capturing the CO2 in the first place. So we see that as sort of a win-win.

CURWOOD: What is unique about what Skyonic is doing?

SMITH: Well, Skyonic is a plant that's using direct mineralization of emitted flue gases which is different from many of the other projects that we have separating CO2, compressing it, and then using it for other sources. So instead of having CO2 in a gaseous or in a compressed liquid form, you can actually turn it into a mineralized form that can be used in sodium bicarbonate or other usual products that didn't have some some salable value.

CURWOOD: Now, as I understand it, Skyonic's process turns out sodium bicarbonate, baking soda, I guess, I used to brush my teeth with it sometimes; then sodium carbonate itself, hydrochloric acid, and then, what, it can make sodium hypochlorite, otherwise known as bleach? 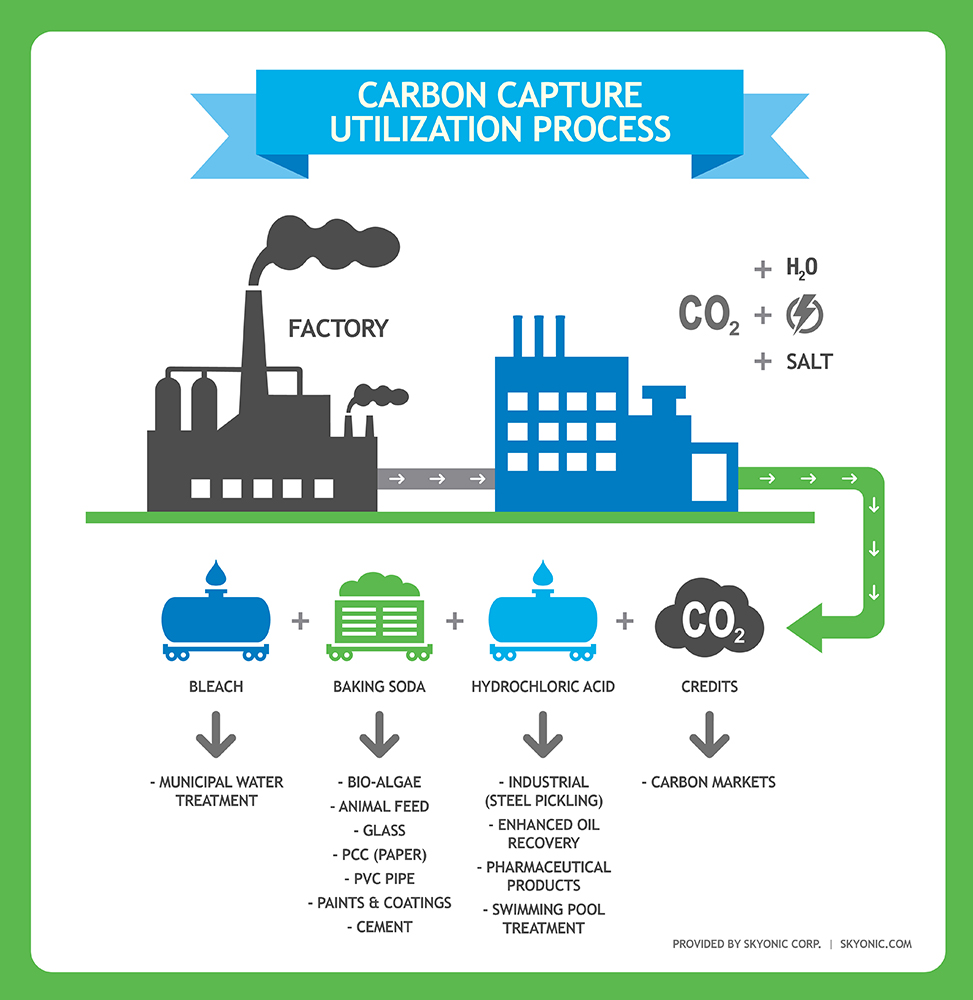 SMITH: Yeah, and bleach. So those are all...those are the four main products that would come out of this plant.

SMITH: Well, in the grand scheme of things, sodium bicarbonate is not going to be a large enough market to alleviate the issues throughout all the CO2 we have to capture, but this is an important first step—to commercialize some processes, to take some things that we know in the laboratory, deploy them out in the field and have the result of actually reducing the amount of CO2 that's going up into the environment.

CURWOOD: So as I understand it, you could also use all this bicarbonate to make limestone, which of course is an ingredient in cement. 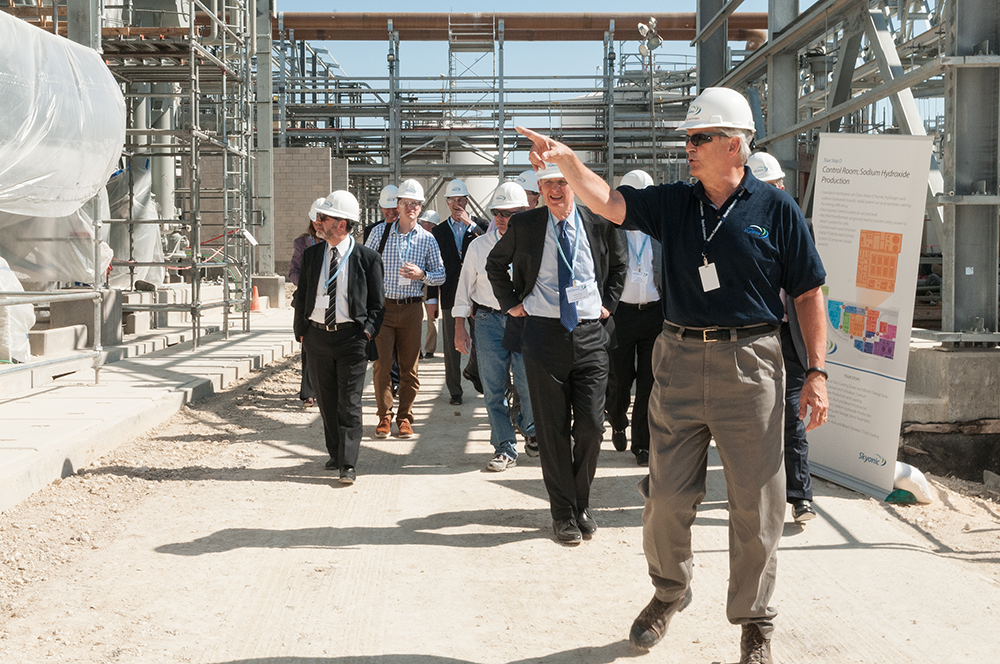 CURWOOD: Now that Skyonic has its first commercial facility up and running, what do you think that means for other businesses who are trying to make money by capturing and recycling carbon?

SMITH: Well, that's a really important question, and that's I think an opportunity to talk of one of our other really important projects we have that’s called Petronova. It's a coal-fired power plant just south of Houston. In this case it's simply a retrofit of the existing coal-fired power plant. They're compressing the CO2, they're putting into a pipeline and they’re transporting it to a depleted oil field and using that CO2 to produce additional barrels of oil.

CURWOOD: But, Chris, it sounds a bit ironic, if you capture CO2 to get more fossil fuel. Doesn't that keep adding to the climate problem?

SMITH: Well, I mean, here's the way you should think about that. If you have more oil that's available domestically, that doesn't mean that the economy is going to be using more oil. What that means is you're going to be importing fewer barrels of oil from other countries. You're doing a lot of really useful things. You're importing less oil, which means you're not bringing it from distant sources. You're creating opportunities right here in United States including jobs and economic development. You're increasing our balance of trade. The CO2 is being sequestered. You're producing a barrel of oil that never would've been produced otherwise, but you're not increasing demand.

CURWOOD: Now, how do you think that President Obama's proposed power plant rules affect this kind of business?

SMITH: Well this is going to be creating a new market for these type of projects. It's going to be a new incentive for companies to innovate, to move forward to reduce the cost of capture, and indeed, in the case of a project like Skyonic that we're talking about today, find new beneficial uses for that CO2. 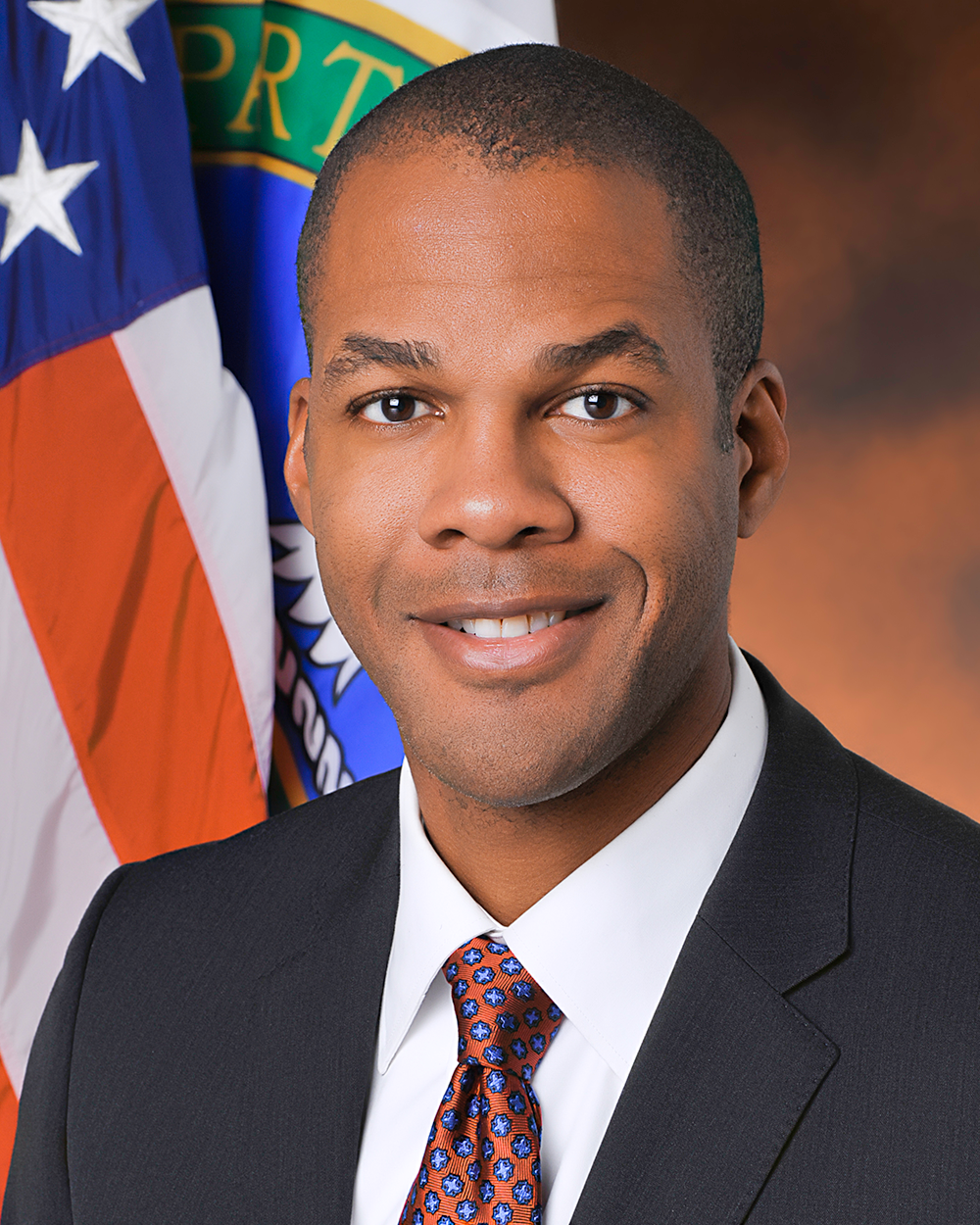 CURWOOD: Supporting projects like this...what's the risk that the funds are getting diverted from alternative energy?

SMITH: Well, there's still a tremendous interest in all of the research and development that we're doing with the Department of Energy: wind, solar, enhanced geothermal, nuclear, but we also have to think about the energy sources of today because not only here domestically in the United States, but also around the world there's a lot of coal that's being burned, a lot of coal that's being used, and we have to deal with that, so we have to come up with smart solutions and you have to invest in a lot of different areas because science being what it is, you don't know where it's going to take you. Every time that we have a success like this, every time we're able to take something from the lab-scale and deploy it out the field, it's important because were taking an idea and turning it into a reality.

CURWOOD: One more question before you go...right now in the American economy there's not really a price for carbon, at least on a national basis. To what extent are businesses like Skyonic going to be viable without a price for carbon?

SMITH: Well, I mean that's actually a really good question. Over time, we're going to need a price on carbon in order to capture CO2 at the scale that one would need in order to confront the challenges of climate change, but for now it's really important that we move forward on these utilization projects like Skyonic, like Petronova in which you can take the CO2 and get some positive beneficial use out of it that helps cover the cost of capturing the CO2 in the first place.

CURWOOD: Christopher Smith is Acting Assistant Secretary of Energy. Thank you so much for taking the time today.

SMITH: Hey, thanks for having me.

The Department of Energy’s Office of Fossil Energy