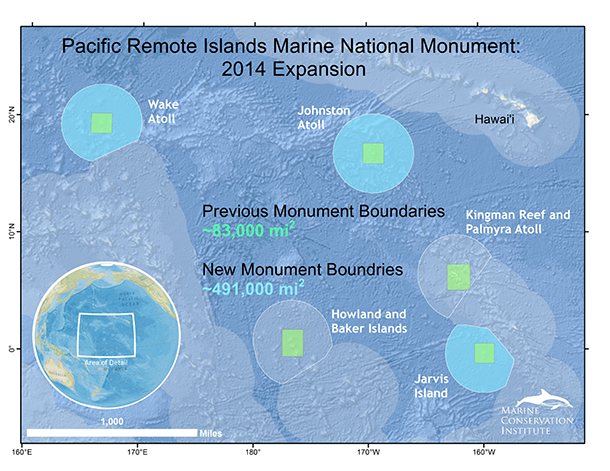 President Obama expanded the Pacific Remote Islands National Marine Monument, protecting nearly half a million square miles of Pacific Ocean from commercial exploitation. Host Steve Curwood spoke with the Marine Conservation Institute’s Founder Elliott Norse about the impact of the reserve on the ecosystem and the precedent it sets for global conservation.

CURWOOD: Ninety percent of the world’s fisheries are over-exploited, according to the WWF, and that is one reason President Obama recently expanded an already massive marine protected area in the Pacific created by his predecessor, George W Bush. It’s called the Pacific Remote Islands National Marine Monument and it covers nearly half a million square miles around a few remote islands of Hawaii, making it the largest ocean reserve in the world. All commercial fishing is illegal within the reserve, and right now, that mainly affects the tuna catch. But it also covers future possible developments, like mining the ocean floor for minerals. We’re joined now by Elliot Norse, the Chief Scientist and Founder of the Marine Conservation Institute in Seattle. Welcome to Living on Earth.

NORSE: It feels good to be with you. Thank you, Steve.

CURWOOD: Overall what damage does commercial fishing do to the oceans as a whole?

NORSE: Commercial fishing is important because it provides employment; it provides capital return on investment; it puts fish on our plates. That's important, but it is often very important in affecting the life in marine ecosystems. When you pull out the large predators and the medium-size organisms and even the small organisms as they are now being fished in many places, what you find is that the ecosystem undergoes profound changes. 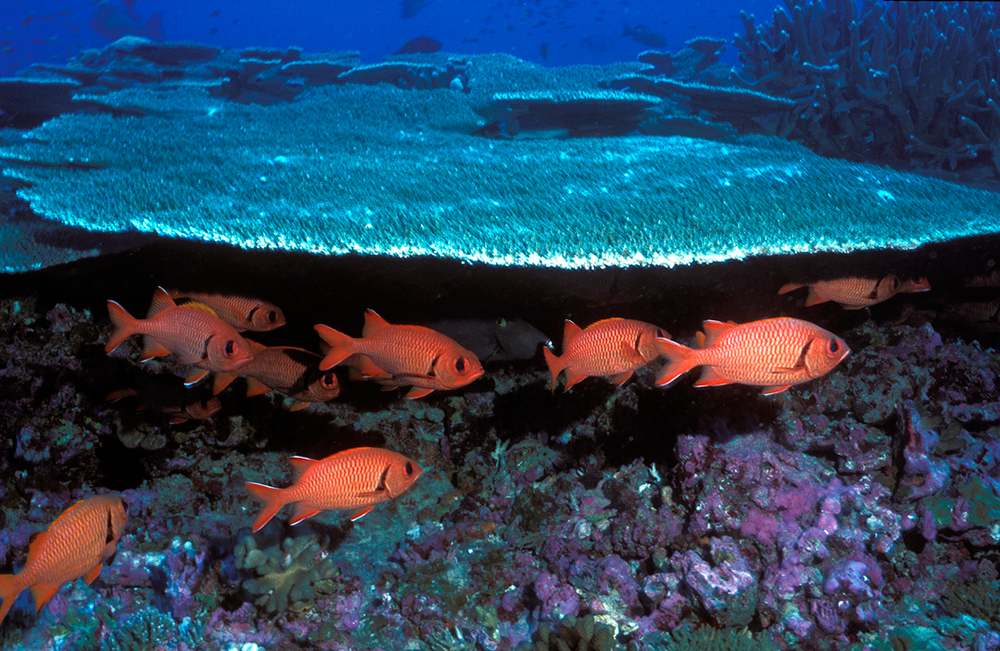 CURWOOD: So help us imagine what these areas are like: What kind of ecosystems are there and what sort of creatures would we see?

NORSE: Well, these are islands surrounded by large areas of open ocean. On the surface are millions of seabirds and under the sea you would see beautiful, beautiful coral reefs around the islands that have big sharks and jacks - not that many little fish because the bigger fish eat them - and that's something that scientists discovered in these islands. You would see sea stars, giant clams—these organisms have disappeared practically everywhere else in the oceans and yet they still survive in the Pacific remote islands.

CURWOOD: What's in this marine-protected area in the deep ocean?

NORSE: There are abyssal plains that are thousands of feet deep, and rising up from these abyssal plains are extinct undersea volcanoes, we call seamounts. And seamounts are like islands in middle of the sea, only they are islands that don't reach the sea surface. They are often covered with really interesting kinds of life that are very different from the waters around them, and in some cases, occur nowhere else on Earth. 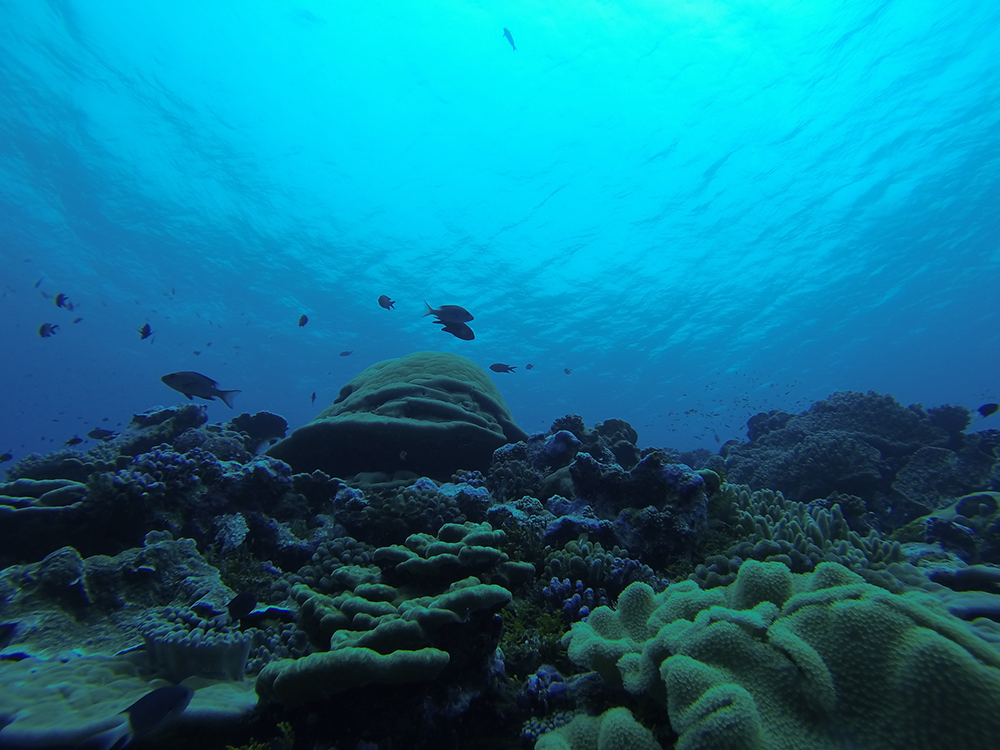 CURWOOD: So somebody who's skeptical of marine-protected areas says, "Well, the fish can swim anywhere." Why is this so good from your perspective as a biologist?

NORSE: Well many fish, they don't wander everywhere. They wander in the places where they can find what they really care about: one, is places to have sex, and two is places to have food. And so these islands in certain places provide hangouts and feeding places for the tunas. You want to dedicate some places, marine scientists say at least 20 percent, to no-fishing zones, no-take marine protected areas, where things can live without being killed.

CURWOOD: So tell us about the other side of the coin here, Elliot. Who will this reserve hurt and how?

NORSE: Well, I think it will be a very small hurt to the tuna fishing industry, and we don't want to see them hurt. They can fish in lots of other places; they just don't like the idea of not being able to go someplace. It's not going to hurt the mining industry because the mining industry has vast areas of ocean that it can mine. What it does hurt is the people who say, "The ocean is all the same and it's all blue. And every part's connected to every other part, so it doesn't matter what you do in any particular place." Places are important in the ocean just as they are on land.

Seabirds join in a frenzied forage for fish in the waters of the monument. (Photo: Kydd Polluck; USFWS)

CURWOOD: How effective is a reserve like this at protecting oceans in this day and age when you think about issues such as ocean acidification, which affects species wherever they are?

NORSE: It does, except that you need to know that ocean acidification is not going to be homogeneous. It's not like smooth peanut butter; it's like chunky peanut butter. And there’s going to be places where it's much worse than others, and some of these places can be predicted. So we can't stop acidification until we stop putting so much carbon dioxide in the atmosphere. That's a no-brainer, but at the very least if we want to endure it better, we have to protect the best places in the ocean and the species that live in them.

CURWOOD: Elliot, how does this help other attempts to create other marine-protected areas around the world?

NORSE: President Obama has just sent a message to the world. It says we are strong enough to make the decision to protect our oceans. We walk the walk, as well as talking the talk. No prime minister or president or king or emperor has ever protected a bigger part of the Earth's surface than President Obama did last week. Now I would love to see nations that have really big pieces of ocean protecting the same percentage of their oceans that the United States is going to protect. Right now, we are strongly protecting 10 percent of our oceans. A lot of that is Pacific remote islands, but we're sending a message: We have to do more, but we'd like to see them doing more too. Our oceans are a global opportunity for us to do something to help us survive on Earth, because that's what it's about. It's about Living on Earth.

CURWOOD: Well, I want to thank you for taking this time with me today. Elliot Norse is the Chief Scientist and Founder of the Marine Conservation Institute in Seattle. Thanks so much, Elliot.

NORSE: Pleasure talking with you, Steve.