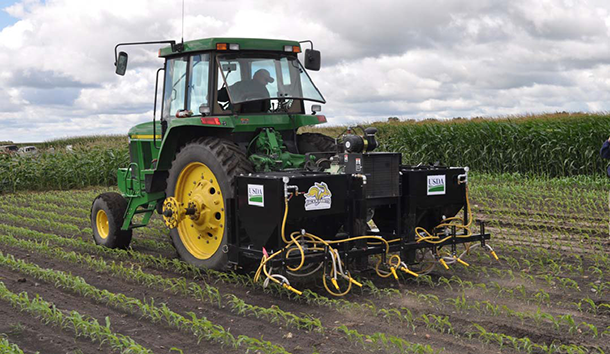 Researchers at the USDA have developed new technology to combat weeds on organic farms. Host Steve Curwood talks with agronomist Frank Forcella about how he modified the common sand blaster to simultaneously fertilize and weed food crops.

CURWOOD: If you’ve ever weeded a garden, you know it’s a backbreaking job, and if you have row upon row of crops, it's, well, it’s easier to use herbicides. But then the crop is not organic. Enter a team of soil scientists for the U.S. Department of Agriculture who harnessed a common tool of the building trades to blast away those unwanted weeds without chemicals. Joining me to explain this breakthrough is Frank Forcella. He’s an Agronomist with the USDA’s North Central Soil Conservation Research Laboratory. Welcome to Living on Earth!

FORCELLA: Thanks, Steve. It’s a pleasure to join you.

CURWOOD: So where did this idea to just simply blast weeds to pieces come from?

FORCELLA: Well, one of my hobbies here in Minnesota is growing apricots, and 2007 happened to be a wonderful year for apricot production in Minnesota. And we ended up with about a five gallon bucket worth of apricot pits, and I was wondering what can we do with apricot pits. And one of the things you can do with them is to grind them up and use then as a grit in sandblasters, and I was talking about that with one of the fellows who works with me, Dean Peterson, on our way out to our field plots. Both of us work on weeds, and we had more or less simultaneously had the idea, "I wonder if you could use sandblasters to kill weeds". Initially we thought that had to be the dumbest idea in the world, but it was one of those ideas we just couldn't get out of our heads.

CURWOOD: The light bulb moment for you guys, huh?

FORCELLA: It was a light bulb moment and then we dimmed that light bulb for a while because we thought, well, who knows how much a sandblaster costs, it's probably thousands of dollars. As it turns out, you can buy a very cheap sandblaster for about $50 dollars, so we invested in one of those. The other piece of equipment you need is an air compressor, and we have several air compressors at our lab. And the easiest type of grit to get that point was ground-up walnut shells, and we had some small experiments in our local greenhouse where we grew some weeds in pots next to a corn plant. And then when the corn plant was maybe six inches tall and the weeds were maybe 1 to 3 inches tall, we would start hitting them with split-second applications of walnut shell grit. 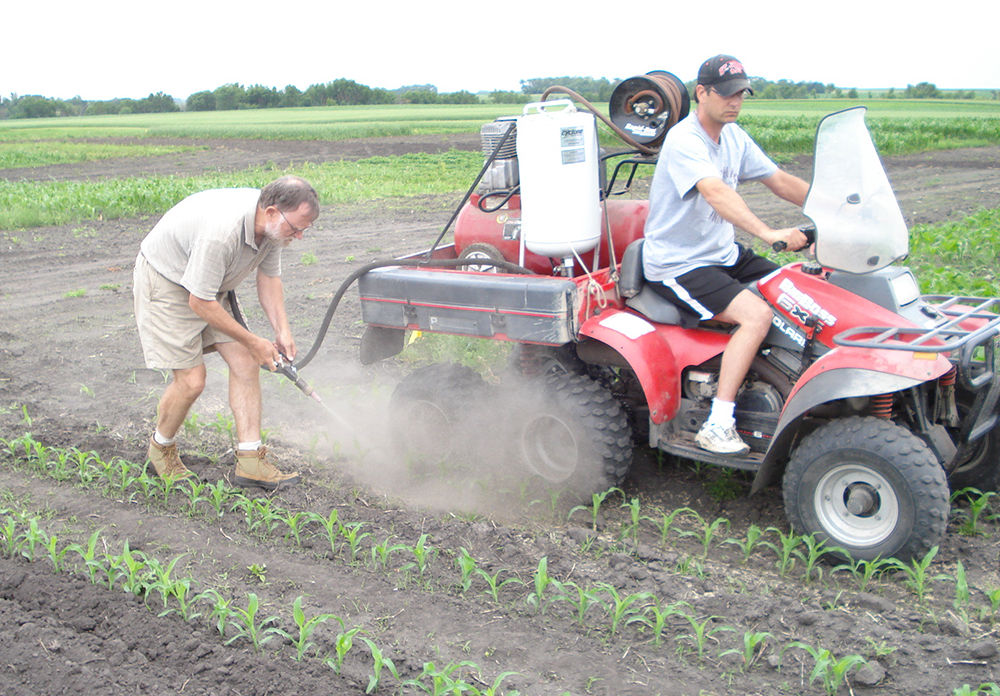 Jim Eklund and Frank Forcella conduct an early test of the concept with a single-nozzle blaster. Jim is driving ATV and Frank applying the grit. (Photo: Courtesy of Frank Forcella)

FORCELLA: Well, the weeds would simply disappear and the corn plant remained intact. Then we decided, well let's try this out in the field, and so we bought a bigger sandblaster. And we mounted that on a small ATV, and Dean would be driving the ATV and he would make me hold the nozzle for the sandblaster. And I would follow the ATV in a stooping position, blasting small weed seedlings they were growing alongside corn plants.

FORCELLA: The primary users would be organic farmers. Weeds are one of the most contentious issues for organic farmers. They have very few other tools in their toolboxes that they can use for weed control, and so they are desperate for alternative forms of weed management. Lots of the tools that organic farmers have are related to soil disturbance: plowing, tilling, disking and so forth, all of which work, but they have environmental consequences, like soil erosion, like CO2 loss from the soil and so forth.

CURWOOD: What do you think is the best material to use for grit when you want to blast weeds?

FORCELLA: If the material has a gritty texture to it, it can be used for weed control with a sandblaster. The most typical one and the most commonly available grit material that is used by professional sandblasters is corncob grit. Now when we've talked to organic farmers about this, they said “well that's interesting, but we probably wouldn't use corncob grit on our own farms, not because it doesn't work, but because it doesn't have an alternative value aside from adding organic matter to the soil”. What they prefer and what their suggestion was, was to use organically approved fertilizers that also have a gritty texture to them, to control weeds as well as fertilize the crops. For example, corn gluten meal, which is very rich in nitrogen. It has a gritty texture and it works just fine as a grit for weed control. But there are many other types of grit too: cottonseed meal, canola seed meal, alfalfa pellets and even crushed limestone that almost every farmer who has acidic soils has to add limestone to their soil, and if they're going to do that, they might as well use it in a gritty form and apply it at the time they have to control weeds. 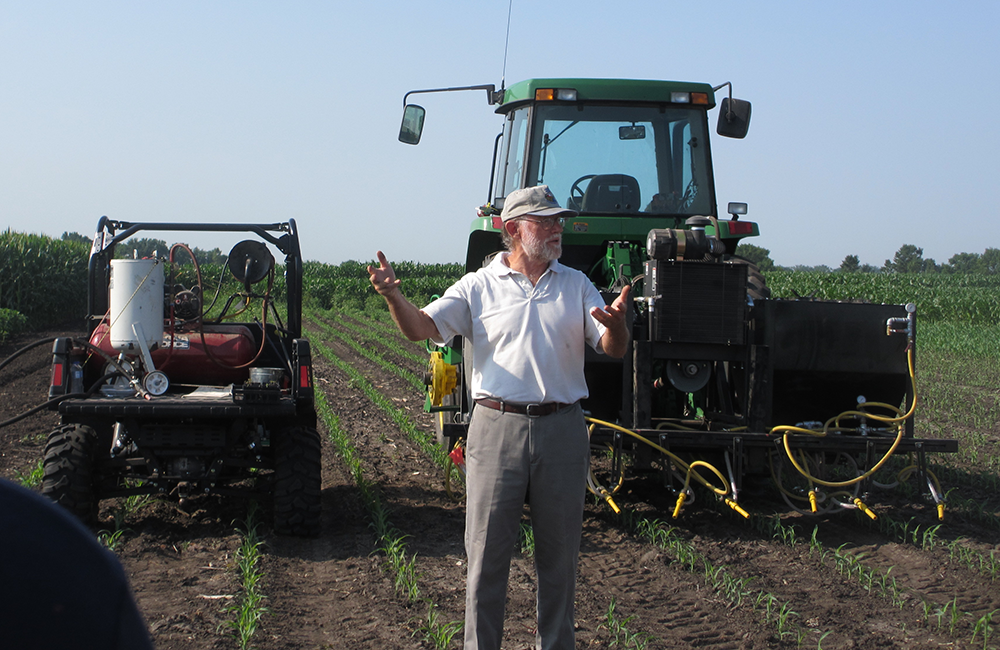 Frank Forcella demonstrates the potential of the Weed Blaster at the University of Minnesota’s West Central Research and Outreach Center. The concept-testing rig is on the left, and PAGMan on the right. (Photo: Courtesy of Frank Forcella)

CURWOOD: Now, what kind of crops can you use this technique on?

FORCELLA: To date, we have been applying this material on both corn and soybean in our experiments, and it has worked well on both of those crops. Professor Sam Wortman has taken up this initiative in Illinois, and he's been using it in tomato and having great success in tomato as well.

CURWOOD: Now, how precise is this blasting? I mean what's the damage of taking out the crop you're trying to protect?

CURWOOD: How cost-effectiveness is this technique?

FORCELLA: So it may cost $100 dollars or more per acre for weed control. That seems expensive, but if you consider the fact that we can use organically approved fertilizers as a grit for weed control, that reduces the cost immensely. This is all in experimental stages and we assume we can become much more efficient in the future. And along those lines we have collaborators now in Spain, as well as University of Illinois and the University of California, Davis, trying to develop the method to improve its efficiency, not just in vegetable crops, but also in vineyards and olive orchards to make the applications more precise—so adding GPS units so we can get precision application of the grit, as well as providing robotic control, so you don't actually need a human out there.

CURWOOD: So, Frank, a while back you and your partner were out there, maybe a bit like 10-year-olds riding ATVs, spraying things around in the fields. Now that this is official, is the fun still there?

FORCELLA: Actually, yes it is, in fact, it's getting even better. The National Institute of Food and Agriculture has just funded another grant; the Spanish government is funding yet another project all along these lines. We think it's starting to snowball, and we are very encouraged.

CURWOOD: Well, I'll be looking forward to having my first taste of crops grown with the Forcella weed blaster.

CURWOOD: Frank Forcella is a Research Agronomist with the U.S. Department of Agriculture in Morris, Minnesota. Thanks so much, Frank.

More on Weed Blaster research and potential via the Minneapolis StarTribune