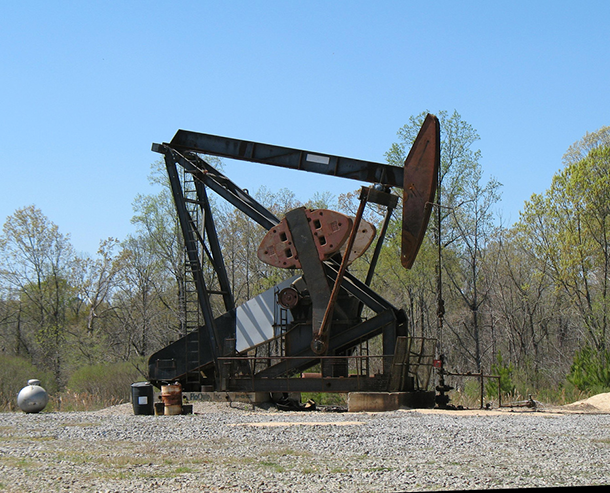 As part of oil and gas extraction, a large volume of toxic waste water is injected deep underground. This can cause earthquakes, and Oklahoma now experiences more quakes than anywhere in the continental U.S. Cornell University geophysicst Geoffrey Abers tells host Steve Curwood how the research linked waste water injection in Oklahoma to earthquakes 25 miles away.

CURWOOD: It's Living on Earth; I'm Steve Curwood. Oklahoma has overtaken California as the most earthquake-prone state in the continental U.S. with more than 230 earthquakes measuring 3.0 or more on the Richter scale this year alone. Most of this shaking is due to hundreds of thousands—even millions--of gallons of toxic wastewater from gas and oil drilling being injected underground. Professor Geoffrey Abers of Cornell University was part of a team that recently investigated this and published a paper in Science, and we asked him about it via Skype.

ABERS: Well, our study is actually about earthquakes, so what we think we’ve documented in this paper is a link between the small number of very high-volume injection wells to earthquakes that have been occurring throughout Oklahoma. I think what struck us a couple of years ago has been the really dramatic increase in seismicity across the central and eastern United States, which are usually places that have very few earthquakes. Since 2008, the number of earthquakes in these last seven years has increased at a rate of about five to ten times relative to the preceding several decades across the whole region, and much of that is actually in the state of Oklahoma where the rate of earthquakes increased about forty times relative to the preceding few decades. 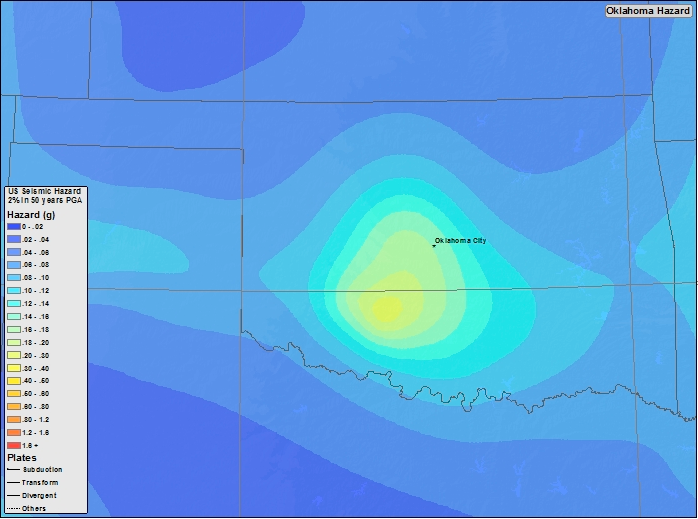 CURWOOD: Now I understand that you ran some models. What did you see when you ran those models and simulations?

ABERS: So we used the same kind of modeling tools that hydrologists use to figure out how water moves around in the subsurface. We took what we knew about the wells, which is how much they pump in every month. We took the 89 largest wells in central Oklahoma for the last decade, put this into our model to look at how the pressure is built up inside the formations at depth with time. What we saw was that there’s a large pressure-front that migrated away from Oklahoma City. The rate that it was migrating and the locations of this front match pretty closely the migration of earthquakes that we’ve seen since about 2009, 2010.

CURWOOD: Part of your study focuses on four particular wells. What was so special about them?

ABERS: Well, in the simulations we did, the patterns we saw show that the main pressure changes came out of a group of wells in southeastern Oklahoma City. That’s sort of where the main source of pressure is. So when we did simulations without those wells, we didn’t produce the same kind of patterns at all as we see with the earthquakes. 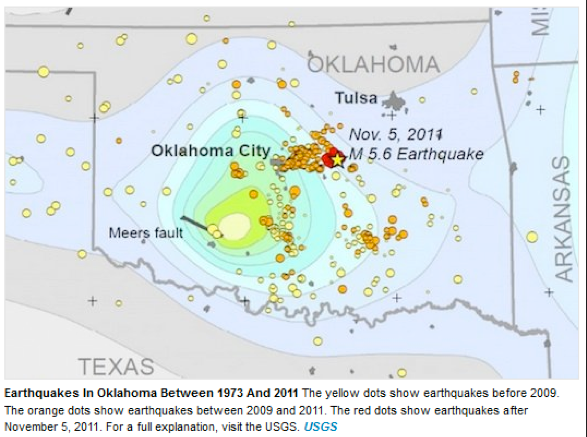 Locations of earthquakes in Oklahoma between 1973 and 2011 (Photo: USGS)

CURWOOD: How exactly does this wastewater injection affect the creation of earthquakes?

ABERS: Well, we’ve known for a long time that earthquakes are caused by a fault that slips. There’s faults everywhere. While the faults are under some stress, what the water does is it gets into the fault and weakens it, so it can no longer support as much stress as it used to. So it takes a fault that maybe was not ready to have an earthquake anytime soon and suddenly weakens it to the point that it fails and breaks and triggers an earthquake on that.

CURWOOD: How can you tell that all these earthquakes are from wastewater injection and not just, you know, normal seismic activity?

ABERS: So this kind of increase in seismic activity—this is just not just something that we've seen anywhere else in the natural system ever. We see clusters that are big earthquakes that have aftershock sequences and then there’s some swarms in volcanic centers that are fairly localized around a conduit, but to see an increase in earthquakes over such a big area by such an amount is really unprecedented anywhere.

CURWOOD: Now how far away can these earthquakes be felt?

ABERS: So that’s an important thing. What we’ve seen in this study is that earthquakes can be triggered as far away as about 25 miles—this is the furthest sort of cluster that we see associated with this main pressure pulse. It’s much further than people have previously been able to associate with injection wells, where it’s usually been just a couple of miles or less.

CURWOOD: So, what’s likely to happen to seismic activity in Oklahoma if all this wastewater injection isn’t curtailed? 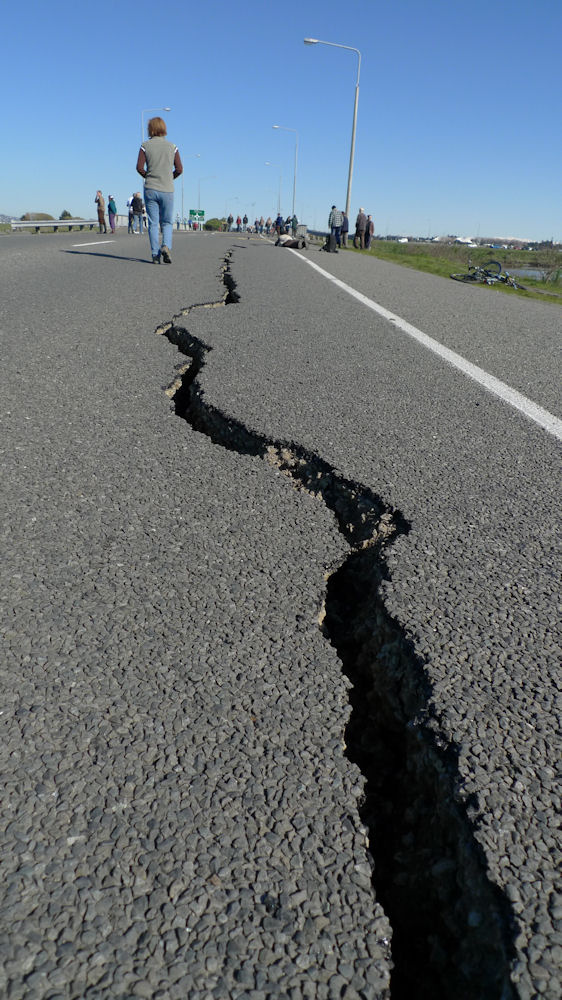 ABERS: Well, I mean, it’s hard to know because we don’t have a good idea of where the faults are that are near failure, but if this continues it’s reasonable to expect that earthquakes will continue to happen.

CURWOOD: And are there a lot of earthquakes?

ABERS: Well, we’re seeing so far in 2014, there’s been an average of something more than an earthquake a day at magnitude three or larger.

CURWOOD: How much of a public safety risk is, say, a magnitude 3.0 earthquake?

ABERS: Well, if you knew you were only making magnitude threes, then there’s not that much to worry about. The trouble is, is that there’s nothing in our understanding of how these faults work that gives us a really good feel for how big these earthquakes could be, so the more of these small earthquakes that you’re triggering and you’re making, the higher the risk of there being a larger earthquake as well in the same area.

CURWOOD: What’s the most intense earthquake that’s been documented to have been triggered by wastewater injection?

ABERS: I’d say the 2011 Prague, Oklahoma, sequence. It was a magnitude 5.7; that’s the largest. There were two magnitude 5s that happened within a couple of days of that—that was just outside of our study area.

CURWOOD: Wow, what kind of damage did those earthquakes do?

ABERS: It was a few million dollars in damage to chimneys, roofs, roads, cracks in foundations. It was felt pretty widely around the Midwest as well. It was fortunately in a fairly rural area so the effects certainly could have been worse if it was in a more densely populated part of the world.

CURWOOD: What do you see as the takeaway message from your study?

ABERS: Well, I think the main takeaway is that high volume wastewater injection, or high volume pumping of fluids anywhere, of any kind, is going to increase the probability of triggering earthquakes significantly relative to other kinds of pumping into the subsurface.

CURWOOD: Geoffrey Abers is a Professor of Earth and Atmospheric Sciences at Cornell University. Thanks so much for taking the time with me today.

ABERS: Thanks for having me on the show.


Read the study in Science