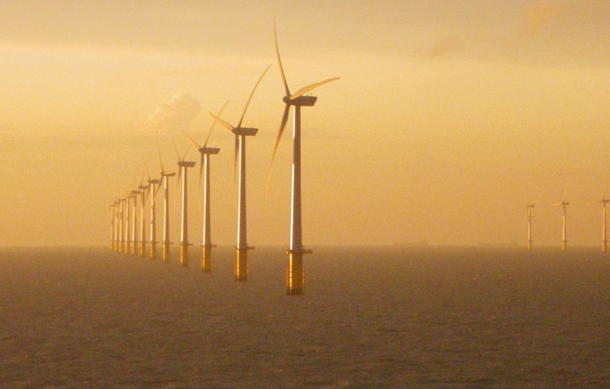 The US Department of Energy has given the 130-turbine Cape Wind project a $150 million loan guarantee. Ken Kimmell of the Union of Concerned Scientists tells host Steve Curwood that this federal vote of confidence may help make Cape Wind the first commercial offshore wind turbine farm in the United States

CURWOOD: Well, though Great Lakes offshore wind has yet to see a windfall of federal funding, things are looking better for a development off the coast of Massachusetts that's been controversial for over a decade. The Cape Wind project would build 130 turbines in Nantucket Sound, and generate enough energy to power 200,000 homes. The U.S. Energy Department has now promised to back Cape Wind with $150 million dollar federal loan guarantee, putting it on track to be the first offshore wind farm in the U.S. And Ken Kimmell, President of the Union of Concerned Scientists, says it will be a powerful way to cut global warming emissions.

KIMMELL: It's one of the largest carbon-reducing projects in the world. It would be reducing carbon emissions by about 700,000 tons a year, which to give you a feel for that—that's the equivalent of taking about 150,000 to 175,000 cars off the road every year.

CURWOOD: The U.S. Department of Energy has now promised to back Cape Wind with $150 million dollar federal loan guarantee. That's, of course, not nearly close to the $2.5 billion needed to put the whole project together. How important is that loan guarantee?

KIMMELL: Well, I think it's really going to help. The federal government, of course, has been behind the project and actually issued the permits for it several years ago, but the project is now in the process of finalizing the financing. And what the loan guarantee really does, it's a vote of confidence by the federal government in the project. It’s something that Cape Wind can take to investors and say, look, the federal government has evaluated the risks of this project and is comfortable with that level of risk and so should you be. So I'm hoping and others are as well, that that process of financing can be completed this fall with construction to begin in 2015.

CURWOOD: So if Cape Wind proceeds, it will be the first offshore wind farm in the U.S. Why do you think that Cape Wind got this federal backing while others such as the proposed one in the Great Lakes so far haven’t gotten support? 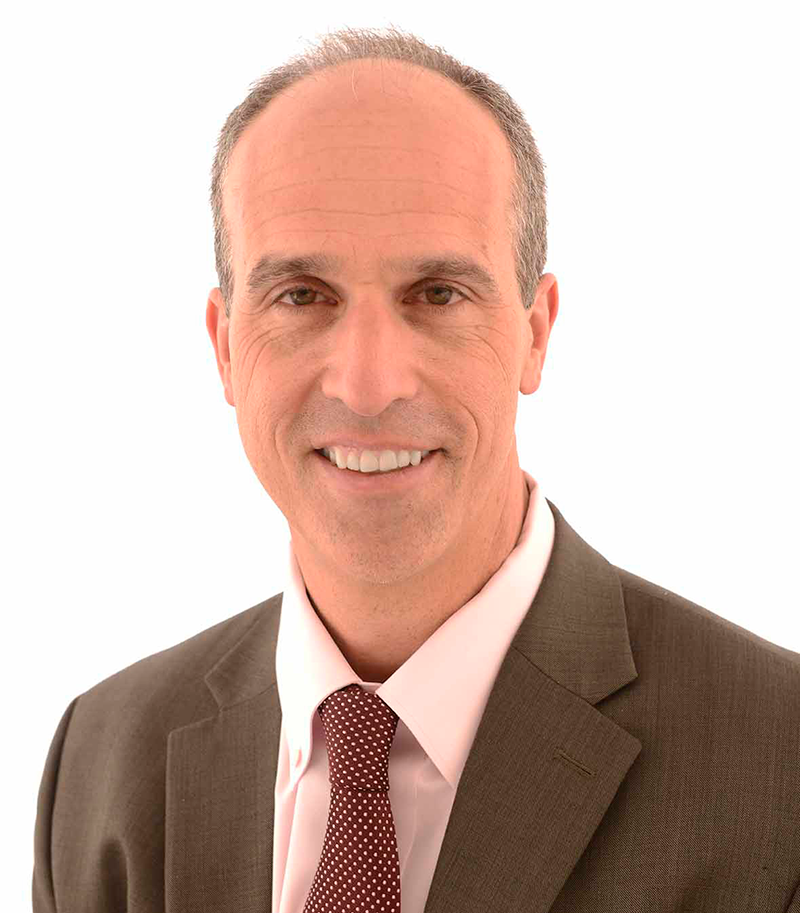 KIMMELL: Well, I mean, I think the Cape Wind project is very far along at this stage. The project now has all of its permits, although there's still a few appeals pending, and it has two signed contracts with Massachusetts utility companies for about three quarters of the output. Those are long-term contracts; they're locked in. They've been approved by the state’s Department of Public Utilities and, you know, right behind Cape Wind is a very exciting development in the northeast, which is the federal government's proposal to lease large tracks of waters further away from shore. And I think the goal here is to get this project up and running, prove that it works, build confidence in the industry as a whole, use the learning from the project to find ways to do it less extensively. My sense is the federal government’s looking at the big picture, and seeing that Cape Wind is a critical first-step to a larger development of the offshore wind industry.

CURWOOD: On the electricity from Cape Wind that’s already been contracted, what are the prices involved? What will the various utilities have to pay compared to present prices? 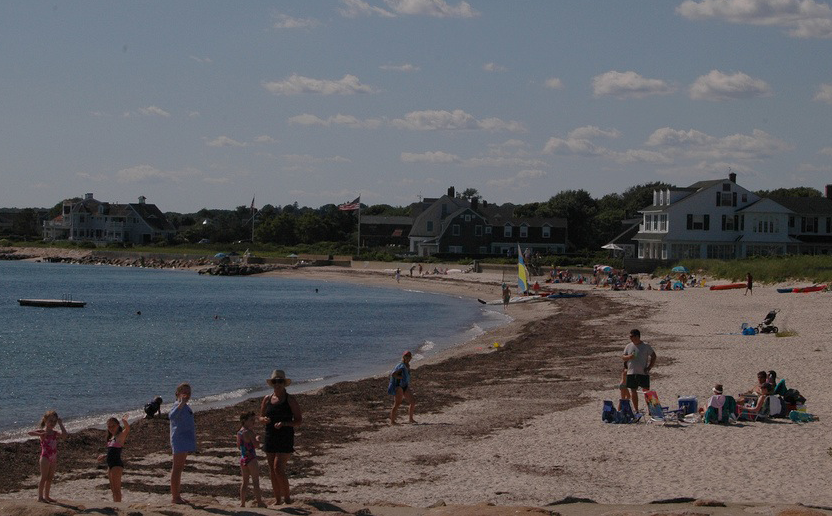 KIMMELL: So the contract prices, and there's no question about this, are higher than market rate. And as natural gas prices have fallen, the gap between the contract price has gone down. There's been an in-depth analysis of what the impacts will be on consumers, and it's about a dollar-fifty a month added to your electric bill. At the time, by the way, when in general electric bills have going down by $20 or $30 dollars a month.

CURWOOD: Now, there were – what? A couple dozen lawsuits filed against Cape Wind over the years. Some of those are still on appeal. How has all that opposition affected things moving forward, do you think?

KIMMELL: Well, I mean, the opposition really has delayed this project for years and years and years. The lawsuits, they do tend to put a shadow over the project and they inhibit investors from financing while they’re pending, but every one of those lawsuits has now been rejected. There may be some additional appeals pending, but not very significant, and so this tactic of delay, while it has worked for a while, is about to come to an end.

CURWOOD: Probably the most visible opponent to Cape Wind was the late Senator Ted Kennedy. Who’s behind the opposition now?

KIMMELL: It's pretty clear that one person who is behind the opposition is Bill Koch, one of the Koch brothers, who’s been very honest about this. He has a large home on Nantucket Sound and he’s said in articles that he doesn't want to have to look at the turbines, and he's funded a group called the Alliance to Protect Nantucket Sound, which has been responsible for these 26 failed lawsuits. And I think it’s well known that the Koch brothers have, you know, investments in oil and gas, and perhaps, given Mr. Koch’s holdings and his financial interest, perhaps he doesn't want to have a viable offshore wind industry competing with fossil fuels. 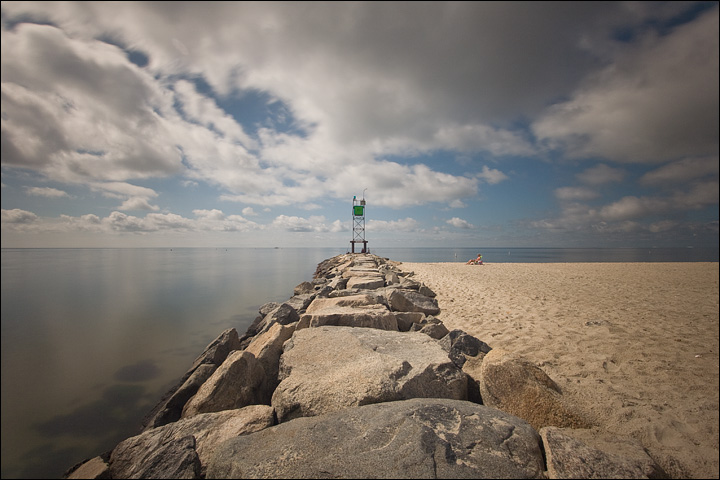 Some are concerned about the visibility of the turbines against the horizon (Photo: Alan Grinberg; Creative Commons Flickr)

CURWOOD: How optimistic are you now, Ken, that Cape Wind is going to wrap up its funding and stick to this projected timeline—getting done sometime the next couple of years?

KIMMELL: I'm really quite optimistic. I mean, I think the thing that's important is the progress that has been made of late in convincing the American public that climate change is real, and that we've got to start finding clean and renewable sources of energy. And this project clearly would offer that opportunity. The other argument that’s very strong in New England is the recognition that we are over-relying upon natural gas as our source of electricity. We’ve got to have some alternatives in place, and Cape Wind is one of the largest alternatives we have. So, I think that argument is really gaining ground and also giving it, if you will, a bit of a tailwind. And again, if we’re going to meet the carbon reductions that we need to meet, we can’t do it without a strong offshore wind industry. That’s where a lot of renewable energy can come from. We’ve got the technology, and now it’s a question of getting the political will and economics arranged to make it viable. And I think this loan guarantee is a very good sign.

CURWOOD: Ken Kimmell is the former Commissioner of Environmental Protection for the Commonwealth of Massachusetts and now President of the Union of Concerned Scientists. Thanks so much for taking the time today, Ken.

KIMMELL: Thank you for having me.


Read the Department of Energy announcement.

Read Ken Kimmell’s post about the decision on the Union of Concerned Scientists’ blog.