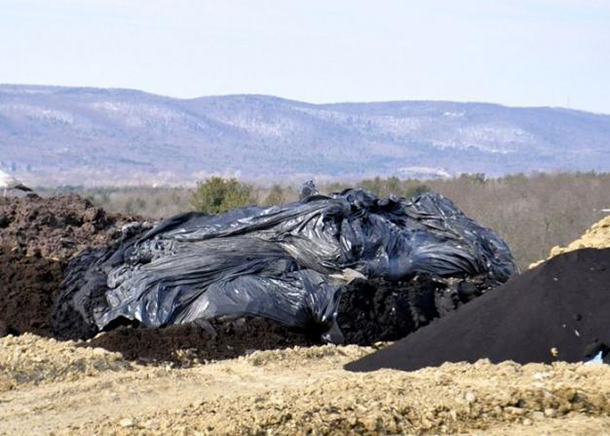 New techniques allow companies to extract oil and gas from deep in the ground, but as Matt Richmond of WSKS and the Allegheny Front reports, naturally radioactive rocks above the Marcellus shale in the Eastern US can create a dangerous waste product.

CURWOOD: Concerns about global warming aside, one reason the U.S. is not so eager to embrace the Keystone XL pipeline is the growth of its own energy production, as Shawn McCarthy mentioned. Fracking is mostly driving the oil and gas boom in America, but that has its own environmental problems, including the natural radioactivity of the rocks that cover the Marcellus shale in the Eastern U.S. And the radioactive debris, or drill cuttings, left behind by fracking can contaminate water unless properly treated. And while New York state has a moratorium on fracking, it does accept plenty of radioactive drilling waste from nearby Pennsylvania, and that has touched off intense debate.

Matt Richmond reports for WSKG and the Allegheny Front, and has the story.

RICHMOND: All rocks have some radiation in them. But the Marcellus Shale is an unusually radioactive underground formation. A recent study found it’s three-times higher than in other rock layers. The element of greatest concern is radium. And that’s what Larry Shilling has to watch out for.

SHILLING: The stuff with the plastic there—that is the drill cuttings.

RICHMOND: Shilling is vice president of Casella Waste Systems. The company operates the Chemung County landfill, where piles of drill cuttings trucked in from Marcellus Shale wells in nearby Pennsylvania are scattered around the yard. The cuttings look like heaps of wet black sand, wrapped in a black plastic liner. They are actually a mixture of rock cut through the gas-rich Marcellus Shale, fluids called drilling mud, used to help bore the well, and liquids found deep underground. All this material comes up before a well is fracked; it doesn’t include fracking chemicals. Shilling sits in a pickup truck at the landfill, watching trucks loaded with piles of dirt crawl by. They’re not allowed to take cuttings that are too radioactive.

RICHMOND: Shilling points out a pair of white tubes, each about five feet tall, sitting on posts at the entrance to the landfill. 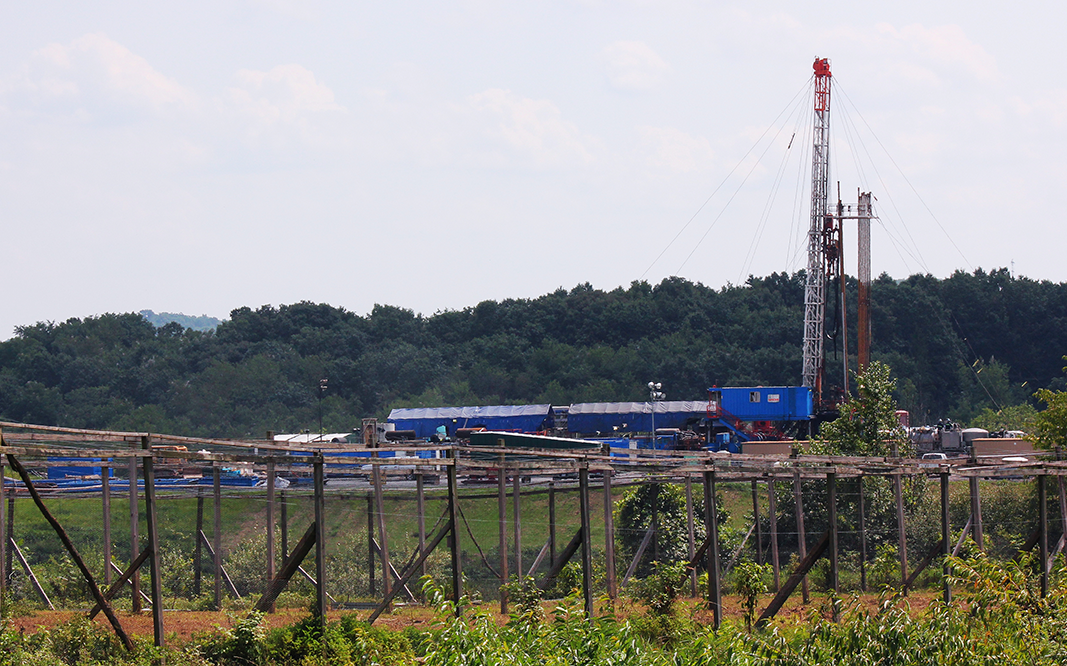 SHILLING: So they pull up; they stop. And as they drive onto the scales, it registers what radioactivity might be in it.

RICHMOND: Shilling says they’ve never had a load of cuttings that exceeded acceptable levels of radiation enter the site. States in and around the fracking boom are working through what to do about all this naturally radioactive waste from drilling. Pennsylvania is conducting a study of radiation in the Marcellus Shale. West Virginia passed a law segregating drill cuttings from other parts of landfills. Casella wants New York state regulators to let the company take even more drill cuttings from Pennsylvania.

But not everyone is convinced this landfill is taking sufficient precautions. Gary Abraham is an environmental lawyer in Western New York working to block Casella from expanding its landfills. Abraham says there’s so much radiation in the deep shale rocks that it must inevitability be getting into landfills. He points to radioactivity readings taken by New York state regulators of the salty water found in the Marcellus Shale. This water, which comes up during and after fracking is called brine.

ABRAHAM: The radioactivity of the brine is as high as 15,000 picocuries per liter. The background radiation at the surface of the earth in New York is about 1 picocurie per liter.

RICHMOND: Shilling says while brine can be more radioactive, the cuttings are benign. In fact, says Shilling, testing they commissioned on the Marcellus showed very little radiation in the cuttings.

SHILLING: The highest reading we got from any of those four samples was 4.3 picocuries per gram, still under the cleanup standard that EPA set for cleaning up sites.

RICHMOND: The difference is: one, is looking at the brine associated with the Marcellus Shale and raising the red flag; the other is just focused on the rock and giving the green light.
The natural radiation in the Marcellus, particularly in the brine that comes out of it during and after fracking, is well established. Avner Vengosh is a geochemist at Duke University. He found radium in a Pennsylvania stream near a plant that processed fracking wastewater at 200 times background level. Vengosh says there’s a risk that, once the radium locked deep underground, gets into streams and rivers, it will make its way into fish and eventually into people.

VENGOSH: Radium is very similar to calcium, and as a result, it would accumulate in the bone and start radiation, which would lead to bone cancer.

RICHMOND: The particular form of radium found in the shale, radium-226, has a half-life of more than 5,000 years. So basically, once it gets into the environment, it’s there for good.
Since contaminants started showing up in streams, Pennsylvania has tightened restrictions on the disposal of wastewater. But the treatment of solid waste at places like the Chemung landfill in New York concerns Vengosh.

VENGOSH: Every contaminant that’s being disposed into landfills, the solids, are subject to numerous attacks of acids and different chemicals, different solutions within the landfill. And they’re creating what we call leachate.

RICHMOND: Leachate: it’s basically garbage tea. Anything that’s in the landfill, like radium. can get into it. What happens to the leachate? It comes here.

MCGOVERN: We are at the Chemung County sewer district on Lake Street in Elmira, and this is a twelve-million gallon per day trickling filter plant.

RICHMOND: The plant handles about six million gallons of wastewater a day. The landfill sends up to 30,000 gallons a day for treatment.
Dan McGovern is the plant’s chief operator. McGovern says they’re only certified to do basic tests at their on-site lab. They can check for solids, pH levels, dissolved oxygen and salts. But, do they test for radium? McGovern says, ‘No.’ Is that something they would have to test for?

MCGOVERN: They would actually have to send it out to a very sophisticated lab to test it; yes.

RICHMOND: The treatment plant tests the water when it comes in and when it goes out, into the Chemung River, but never for radiation.

Casella does a quarterly radiation test of its leachate. Results showed low levels of radium-226, but with each testing, there was a small increase. In New York, Marcellus Shale drill cuttings are exempted from the regulations governing low-level radioactive waste. If they weren’t, landfills couldn’t take them, and the leachate would have to go to specialized treatment plants that can handle hazardous waste.

CURWOOD: Matt Richmond reports for WSKG and the Allegheny Front.


Check out the original story at the Allegheny Front’s website