Five gold-mining projects have been proposed on the British Columbia and Alaska watershed, threatening important salmon populations and pristine rivers. Chris Zimmer, the Alaska Campaign Director for Rivers without Borders, joins host Steve Curwood to discuss the environmental dangers of the proposed mines and the response of the two governments.

CURWOOD: It's Living on Earth, I'm Steve Curwood. Five major mining projects have been proposed for the transboundary watershed – the waters shared by British Columbia and southeast Alaska. The region is home to important salmon producing rivers that originate in British Columbia and run through Alaska to the sea. A number of environmental groups, Alaskan Natives and commercial fishermen strongly oppose some of these mining developments across the border. They argue mining could have negative impacts on the salmon and water quality, and irrevocably alter the region's economy, environment and way of life. Chris Zimmer is Alaska Campaign Director for Rivers without Borders, and he joins us on the line to discuss the proposed mines. Welcome to Living on Earth, Chris.

ZIMMER: Thanks for talking to me today.

CURWOOD: Chris, tell me, why is this transboundary watershed areas so important?

ZIMMER: These major rivers that begin in British Columbia and flow into southeast Alaska are really the life blood of the region. The rivers in total in the region support a salmon fishery and trout fishery that’s probably worth over $1 billion and then you also have customary and traditional fisheries that feed people, that support them. The forest is built on those fish...the bears and everything else in those forests live off the salmon. Without those rivers, southeast Alaska would be a vastly, vastly different place.

CURWOOD: Now let's focus on the biggest of these five proposed mines. It’s the KSM mine. Please describe what's proposed? 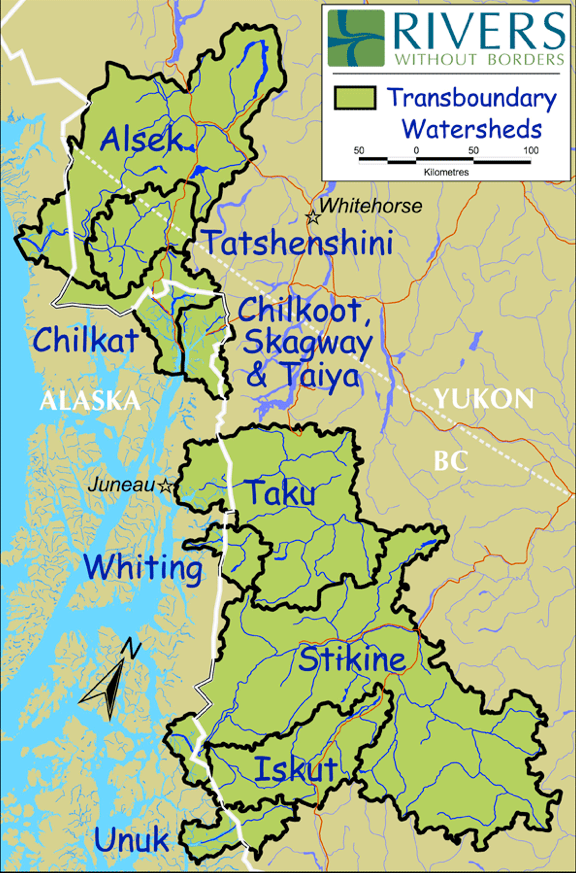 ZIMMER: I think when you look particularly at KSM, it's the wrong mine in the wrong place. This is a mine with three open pits and an underground mine. One of the biggest mines in the world, probably the deepest open pit in the world. It would have several major tailings dams to contain all the waste rock and tailings which would be about several billion tons with incredible amounts of acid mine generating and heavy-metal generating rock...it would have to be contained for centuries if not forever and it's right above one of the premier King salmon rivers in the region. If this was somewhere in the middle of a dry desert it would be easier to manage this, but you have an incredibly wet environment with very productive salmon fisheries, very remote challenging mountainous terrain subject to earthquakes and glaciers, accidents and problems are going to be very difficult to clean up. KSM also proposes an unprecedented level of water treatment...seven of the probably biggest water treatment plants on the planet that would have to treat up to 118,000 gallons of polluted water per minute, and the question we tried to put in front of the Canadian government is what are the long-term overall cumulative effects of all this development and how can we make sure they’re addressed now rather than later? And that question still seems to be hanging out there. 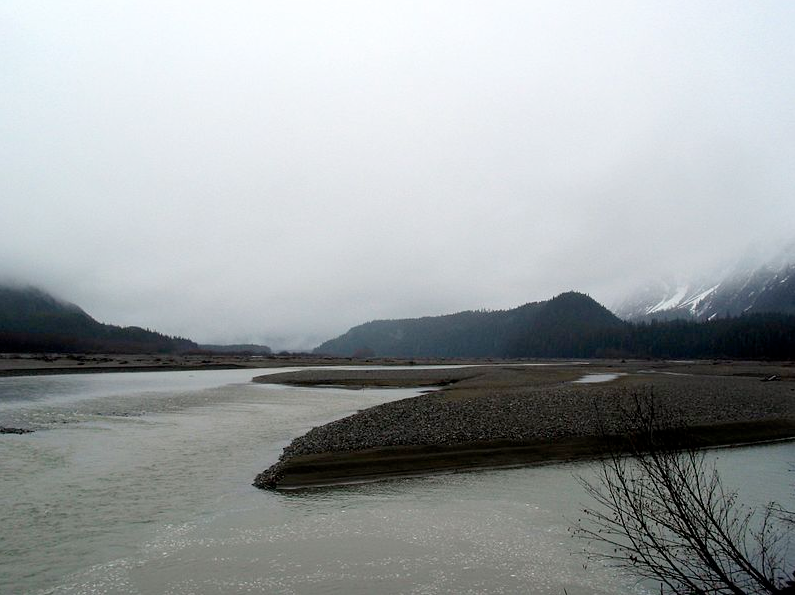 CURWOOD: Mining folks say that they’re going through a long permitting process to ensure they won’t cause an environmental disaster now or in the future. Why are you not reassured?

ZIMMER: There is no requirement in the BC permitting processes for the Canadian or BC government to accommodate Alaskan concerns. They can listen but they don’t have to do anything. So a permitting process is designed to permit these mines, it’s very short term, and it just is not taking into account a lot of these long term issues, like the storage of the tailings. One quick example in the Taku river near Juneau, that’s also an acid mine. It was abandoned in the 1950s, and it’s been spewing acid mine drainage into the river since the 50s. We were told by the company and the BC government that the permitting process would stop that pollution, yet it still continues. The company’s under a number of pollution abatement orders. They built a water treatment plant that they promptly closed, so here we have a real world example of how things should be better and how mining should be cleaning up its mess, and it just isn’t happening.

CURWOOD: So from the Takeuchi what environmental effects have you seen there, and what efforts have there been to reduce or eliminate the acid effluent?

ZIMMER: We have seen a large dead zone downstream from the mine where nothing seems to live because of the toxic contamination. Part of the issue is we haven’t seen the studies done to actually determine the effects, you know, where is this pollution ending up? Is it getting into the juvenile salmon, which are really the main issue here, not the adults. Is it killing off the invertebrates and the bugs in the stream bottom that salmon live off of? So, these are very sensitive watersheds. They’re incredibly rich in salmon and wildlife. They have incredibly pure water quality, but they can’t sustain the impact from mining and still continue to be that productive here, so if we see heavy metal contamination in these rivers that eventually leads to serious problems for fish and everybody who depends on them.

CURWOOD: Now, how involved has the state of Alaska been in terms of this mine permitting process across the border from British Columbia?

ZIMMER: Apparently the Department of Fish and Game and the Department of Natural Resources up here have some kind of endless blind faith in the BC permitting process, and they seem to think that everything is alright and that the permitting process can take care of it, and we simply disagree. The track record with the Takeuchi has shown that that’s not the case. The engagement from the state of Alaska has been minimal, and in fact, the engagement from the state of Alaska in the KSM mine permitting process has been paid for by the owner of the KSM mine, and I think that puts you in an inherent conflict of interest if you’re a state agency trying to regulate mining, so we have been quite disappointed in the response of the state of Alaska and that’s why we’ve gone directly to our Congressional delegation, directly to the State Department to try to make this a federal government to government issue.

CURWOOD: So your motto is, there’s gold in them their hills...and leave it there.

ZIMMER: [LAUGHS] Well, there’s silver in the rivers as well, and if we keep the rivers well, that silver in the form of salmon comes back every year. You just have to manage them well, and we can have both. We can see some mining and continued fisheries, but it has to be done carefully here.

CURWOOD: Chris Zimmer is Alaska Campaign Director for Rivers without Borders. Thanks so much for taking the time today, Chris.

ZIMMER: My pleasure for talking with you.

CURWOOD: There’s more on our website, LOE.org, including comments from the Alaska Department of Natural Resources.

Kyle Moselle of the Alaskan Department of Natural Resources wrote in an email seeking comment on the KSM mine project.

"…the applicant has adequately responded to the State of Alaska’s comments to the technical working group for the proposed KSM Project. Seabridge provided us with more details on the specific types of fish habitat that would be lost in the British Columbia portion of the Unuk River from the proposed activities. The total fish habitat loss is estimated to be 383 m2 (a bit less than the size of basketball court), but we wanted to know whether the affected areas provided spawning, rearing, or migration habitat, and for which fish species. Seabridge has provided us with that additional information and referred us to the Fish Habitat Compensation Plan (EIS, Appendix 15-R) for information on the productive values of those habitats and the proposed compensation/offsetting measures for their loss.

The project proponent also responded with adequate information to answer our questions regarding regulation of waste water discharges and required financial security," (and) "has adequately answered our project-specific questions (see attached responses, which are also available on the EAO’s Project Information Centre website).

I think that the project proponent and the Environmental Assessment Office have adequately responded to the comments, concerns, and input provided to them by the State of Alaska throughout the environmental assessment process. British Columbia has a capable project review process, and the Department of Natural Resources is happy to participate in it.”