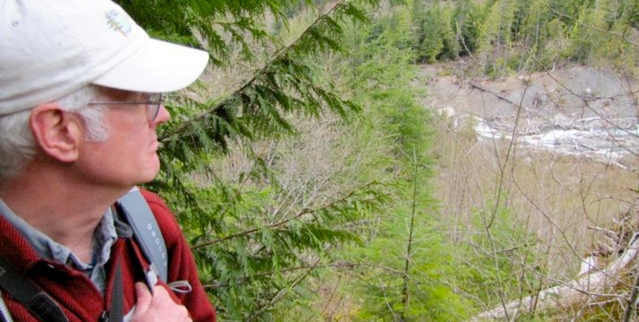 With global warming come more intense rains, floods and landslides. In Washington State, as Ashley Ahearn reports, local government is stepping in to buy out homeowners in danger zones, ignited a debate over managing landslide risk and property owners' rights.

CURWOOD: As global warming advances, basic physics tells us that increasingly torrential rains increase the likelihood of devastating landslides, such as those that recently struck the Balkans and earlier this year wiped out a community in Oso in Washington State. And in mountainous areas prone to landslides it can be tough to strike a balance between the rights of people to live in these beautiful but risky places and their safety. Reporter Ashley Ahearn of the public media collaborative EarthFix visited a wild area in Washington where officials made a controversial move to keep citizens out of harm's way.

AHEARN: In their spare time, Dan McShane and John Thompson like to bushwack through thick forests.

[SOUNDS OF WALKING THROUGH WOODS]

AHEARN: Until they arrive, suddenly, at cliffs...cliffs that are formed when massive amounts of earth slide off mountainsides.

AHEARN: We step out of the woods and look down the bare face of a landslide. 500 feet or so below us Canyon Creek rushes along on its way to meet the Nooksack River.

These geologists have let me tag along with them, high into the mountains near Mt. Baker, to check out two landslides that have cost Whatcom County millions of dollars, and a lot of headaches.

McShane shimmies out along a log, wedged between two sides of the ravine, to get a better view. My stomach lurches a little bit when he tells me to follow him.

MCSHANE: I have a comfort level though that might be a little warped.

Ashley Ahearn (on tape): I think you're part billy goat. 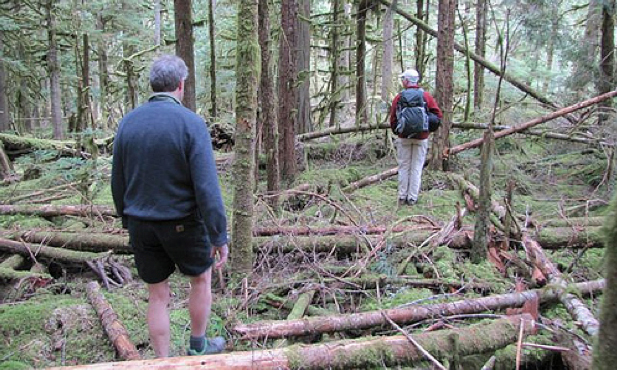 Dan McShane and John Thompson hike through thick forests above the Jim Creek landslide, which has blocked Canyon Creek in the past, causing flooding downstream. (photo: EarthFix)

AHEARN; I clutch my microphone and clamber across after the crazy geologist, rocks skittering away down the cliff below me.

AHEARN: Canyon Creek is a steep, fast-flowing tributary of the Nooksack River; we’re about 30 miles east of Bellingham in the North Cascades. There are actually two active landslides here, one on either side of the creek. McShane and Thompson explain. 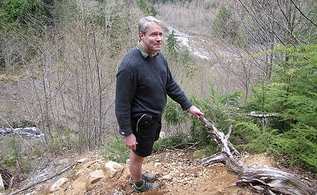 THOMPSON: That's Bald Mountain in the far distance. This cupped face that we're looking at is where the slide originates, where the head of it is and then the toe reaches all the way down to the stream.

AHEARN (on tape): So we're standing basically on, if you think of the landslides as the gates that close and block the river, we're standing on one gate of this river, right?

MCSHANE: Yeah, that's a good descriptor, pinch points, because they are both coming at each other, towards the river. In a way the worst scenario would be that you have a pretty big movement on one or the other that would cause the river to be dammed.

AHEARN: And that's exactly what happened here in 1989. These landslides blocked Canyon Creek. The water built up behind the debris and then it burst through. It swept away four homes downstream. No one was hurt.

BENSON: Some of the reports that the locals gave was that it got very quiet for hours before. All of a sudden the stream dropped.

AHEARN: Rick Benson's house wasn't harmed by the flooding, but he's lived in the community for more than 15 years and knows people who lost homes. He says they were lucky to realize that the river had almost stopped flowing, a key sign that things were backed up upstream, and that a big flood was coming.

BENSON: And sure enough, 3 or 4 hours later was when the deluge came through and washed everything out.

AHEARN: That landslide - and several others that followed it - got Whatcom county's attention.
First, the county built a levy in 1994 to deal with the flood risk. But it developed structural problems that were going to cost the county more than a million dollars to fix. It was also harmful to the salmon that use the creek. 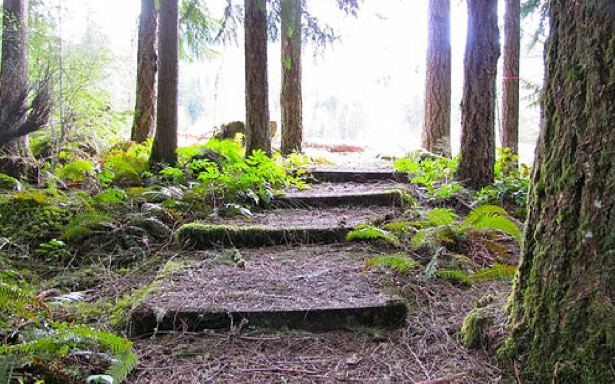 Flooding, caused by landslides in Canyon Creek, swept away four homes in Glacier Springs in 1989-90. These steps are all that’s left of one of the properties. (photo: Ashley Ahearn)

Whatcom County started looking at other options. The Council concluded that people shouldn't be living in the flood zone below the landslides. So for the past decade or so, Whatcom County has bought out 31 properties along Canyon Creek. It paid for the buy out with some county money, some Federal money from FEMA and some from the Whatcom Land Trust. All told, the buyout cost more than 1.6 million dollars. Rick Benson thinks the county made a good call.

BENSON: I think moving the homes and protecting people and property where they could, I thought it was the right idea. But it all depended on who you talked to. In general I think it was well accepted and the vast majority of owners sold their lots.

AHEARN: One property owner who opposed the buyout, but still took the money, declined to be interviewed for this story. Dan McShane, the geologist you heard from earlier - was actually serving on the county council at the time of the buyout decision. He played a key role in convincing the county council that letting people continue living there was not an option.

MCSHANE: I used terms like 'it would be immoral' because in my mind it was. This isn't property rights any more, this is about life and death. When you get to that level I think people react much differently.

AHEARN: Since the devastating Oso Landslide killed more than 40 people in Snohomish County earlier this spring, conversations about property rights versus government authority have taken on new weight.

For some people, owning land is a symbol of freedom, people should be able to do whatever they want on their property, even if it's in a dangerous area. The question is who is responsible when disaster strikes? 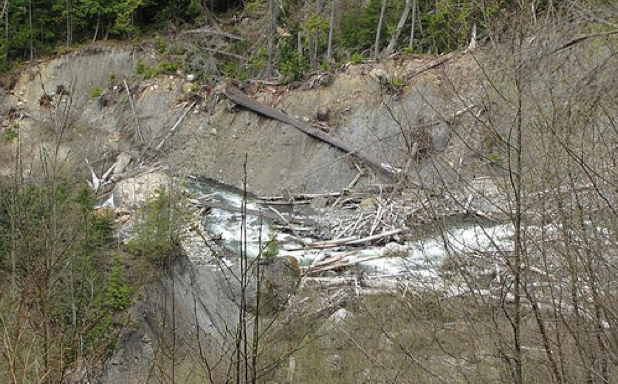 Ken Mann serves on the Whatcom County Council now. He says if he'd been in office at the time of the buyout decision, he would have voted against it.

MANN: It's not for me to give out charity on behalf of the people of Whatcom County. We should not be in the business of foolproofing and disaster proofing the world. Let people have their freedom, do what they want on their property and give them the responsibility to deal with the consequences.

AHEARN: Mann believes people need to do their homework before they buy, but the county should help buyers get the best information about the potential risks associated with their property.

MANN: The government should be in the business of sharing information. I know in the world of GIS – Geographic Information Systems -- there is a ton we could be doing and we're limited by the number of staff and resources we have but I'd like to look at that.

AHEARN: The technology is there, but it's expensive, and most counties are just beginning to incorporate it. Right now only 22 percent of Washington State has been mapped using LIDAR technology. LIDAR imagery cuts through the tree layer to show where old landslides have occurred. The Washington congressional delegation is urging federal lawmakers to better fund landslide hazard mapping. 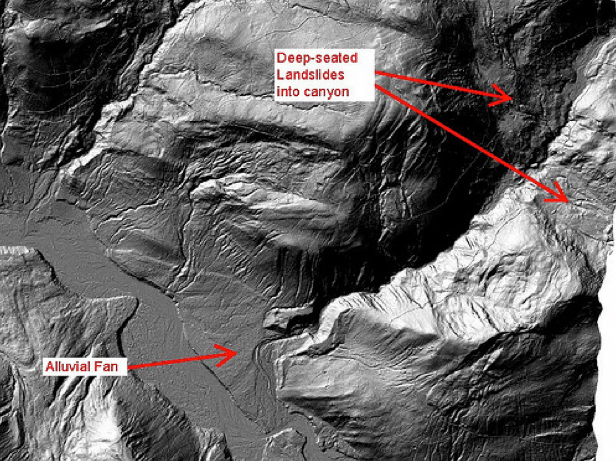 This LIDAR image shows the Jim Creek and Bald Mountain landslides. The community of Glacier Springs is located in the alluvial fan of the creek, roughly three miles downstream of the landslide “pinch point.” (photo: Dan McShane)

It's impossible to know how the residents of Steelhead Drive in Oso would have responded, had they had more information about their landslide risk or been given the option to take a buyout.
In Whatcom County, the buyout wasn't a quick or easy process, but now there are 31 fewer households in harm’s way.