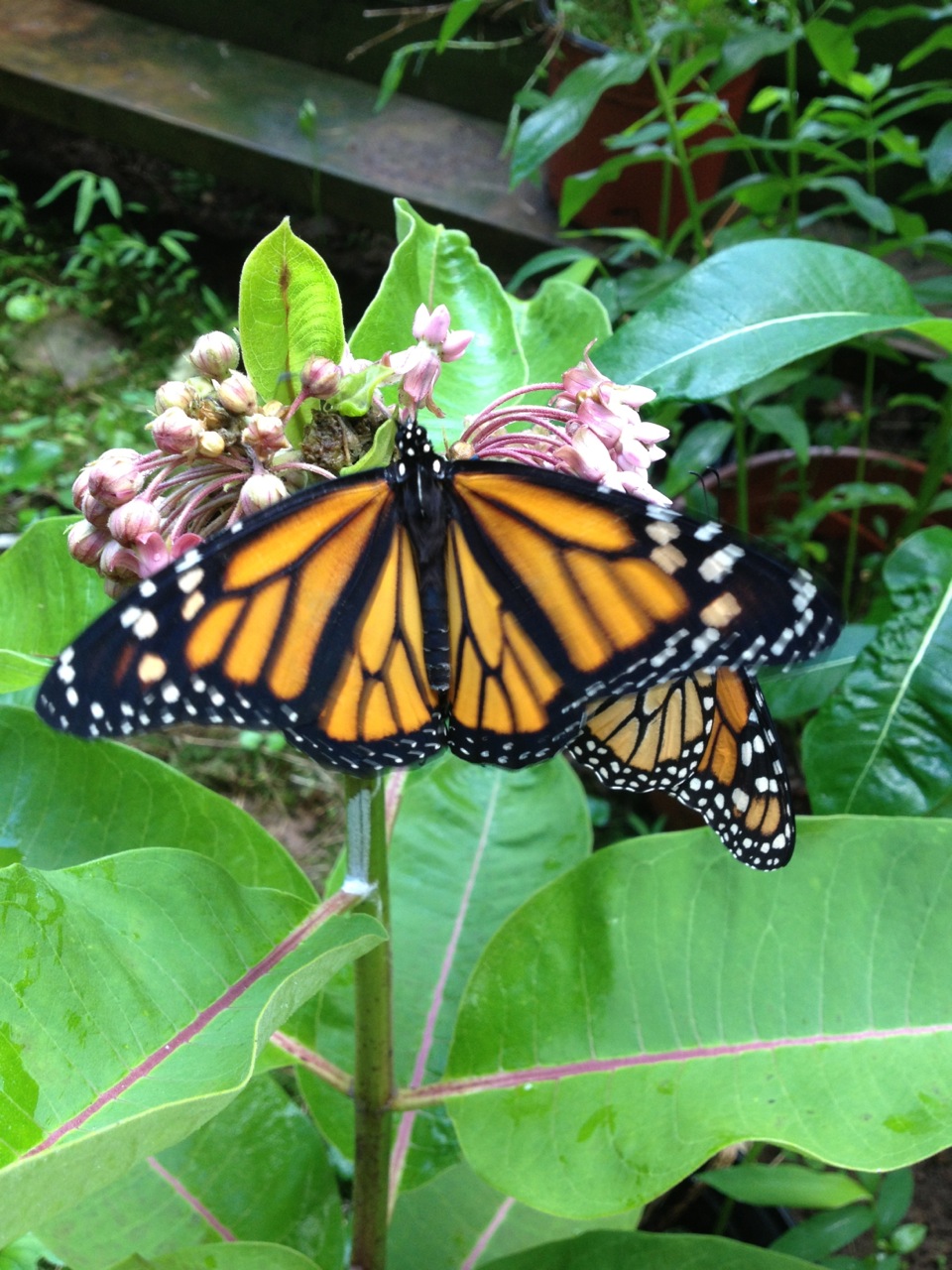 Monarch butterflies are completely dependent on milkweed for their reproduction. (photo: Make Way for Monarchs)

At a summit meeting in Mexico February 19, the heads of government of the US, Canada, and Mexico signed an agreement to help Monarch butterfly recovery. Writer Gary Paul Nabhan tells host Steve Curwood that habitat loss in all three nations and and herbicides in the US and Canadian farm belt are blamed for the crash in the monarch's population, and a citizen day of action on April 14 is planned to plant milkweed, which Monarchs need for breeding.

CURWOOD: It's Living on Earth, I'm Steve Curwood. One of the most iconic migrations in North America is that of the eastern Monarch Butterfly, which flies from Mexico through the US to Canada and then back to Mexico over several generations. But this population of Monarchs is in severe decline, even though the logging that destroyed part of its wintering grounds in Mexico has largely been halted.

On February 19th, the heads of government of Mexico, the US and Canada - nicknamed the three amigos - met in a summit session outside Mexico City that included plans to set up a joint Monarch butterfly task force. Writer Gary Paul Nabhan, with the group Make Way for Monarchs says they have an idea what's caused the recent collapse in population numbers.

NABHAN: Well, we now suspect the problem is in the breeding grounds, the summer breeding grounds of Monarch butterflies in the United States and Canada. Now Monarchs have a complex cycle that gets them through their migration both ways. Four or five generations of Monarchs can appear in North America over the warm season, and each of them is exclusively dependent on milkweed plants for laying their eggs and the larvae eating their first meals from those milkweed plants. And eating the milkweeds, they gain a toxin in their bodies that helps repel predators to some extent. We can’t have Monarch butterflies without milkweeds, and by some counts milkweeds have declined to only 59 percent of their former abundance in midwestern corn fields.

CURWOOD: What has happened to milkweed?

NABHAN: Well, milkweeds have been decimated by the untargeted and obsessive use of certain very effective herbicides. Those herbicides are now used in conjunction with herbicide tolerant crops - cotton, corn and soy - and that means that the crops can survive the herbicide spraying but most weeds cannot. Milkweeds themselves are not tolerant of the herbicides called glyphosates, and because of that their numbers have declined more in the last decade than any known period in American history.

CURWOOD: Now as I understand it, your project Make Way for Monarchs has plans to plant lots of milkweed all over America. How would you do that?

NABHAN: That’s right. We’re solutions driven and we rely on both collaborations with governments and nonprofits, but we’re putting out two to three million milkweeds to local garden clubs and native plant societies. So two to three million plants will go out this summer, along highway sides and in the rights of way of electric transmission lines and railroads.

CURWOOD: Now how urgent is this problem? I noticed that a couple years ago we had a lot of Monarchs in our backyard. I counted I think over 20 one evening, but last year I don’t think I saw any. And I live in southern New Hampshire.

NABHAN: Well, what you’ve seen in southern New Hampshire is similar to what’s happening in about a dozen states, Steve. People who have regularly observed or even tagged Monarch butterflies just didn’t see them this last year. And now we have the confirmation from Mexico that this was the worst year in recorded history of reliable counting of the Monarchs that arrived there.

CURWOOD: Gary, can you imagine in our lifetime years with no Monarchs? What are the odds they could go extinct altogether?

NABHAN: Well, the irony is that other once common widespread species have gone extinct in North America. For all purposes, that’s what happened with the chestnuts due to a disease and due to hunting we lost passenger pigeons. And now we’re trying to make sure that does not happen to Monarch butterflies.

CURWOOD: What can the average person listening to us do for Monarchs?

NABHAN: Well, all of us can plant gardens of milkweeds and the wildflowers that Monarchs need for nectar in our own homes, schools and in parks. We can also join together for what will be an April 14 day of action and contemplation for Monarchs on the 50th anniversary on the death of Rachel Carson, the scientist, of course, who wrote Silent Spring and is the matron saint of the environmental protection movement. We’re having church services and public discussions throughout America on April 14 to draw support for protecting both Monarchs and other pollinators and the wild plants that they depend upon to complete their lifecycle.

CURWOOD: How would you feel if this species when extinct in your lifetime?

NABHAN: I would be heartbroken. I think that Monarchs are an icon, a symbol, not just of hope, but of the transformations that people make on their own personal, emotional, and spiritual journey through life. And so Monarchs are significant in ways just beyond their biological reality. They’re of mythic proportions. And that’s why so many children as well as adults are attracted to their story.

CURWOOD: Gary Paul Nabhan is co-facilitator of the nonprofit Make Way for Monarchs based in Patagonia, Arizona, outside of Tucson. Thanks so much for taking the time with us today, Gary.

Text of joint summit press conference, including remarks about the monarch task force