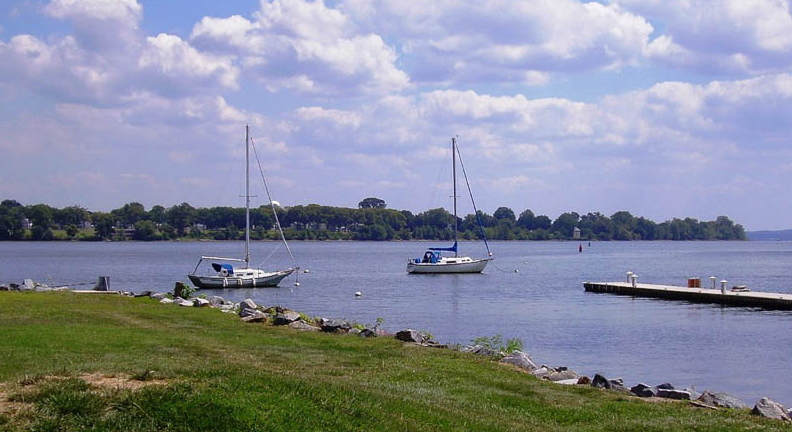 The EPA wants to limit the storm water run-off going into rivers and streams to help clean up the Chesapeake Bay. Some towns are charging citizens a fee to upgrade storm drains. As Julie Grant of the Allegheny Front reports, locals call it a "rain tax".

CURWOOD: Part of the new thinking about water handling involves a decision by the federal government to restrict how much storm water runs directly off hard surfaces into the waterways. For many cities, it’s proving expensive ­ especially in older communities, where culverts are in need of repair. To fix those systems, local governments are starting to charge residents a stormwater utility fee - what some call a rain tax. Julie Grant of the public radio program the Allegheny Front has our story.

GRANT: There’s a big hole in the street in the small downtown of Meadville, 40 miles south of Erie. More than seventy years ago, much of the city was built over the top of streams, which are enclosed in concrete tunnels, called culverts. Assistant City Manager Andy Walker says last summer, when Meadville got hit with a huge rain storm, one of the major tunnels clogged.

WALKER: Essentially, the culvert became nearly completely plugged, with sediment and debris, rocks, branches. Some from the storm itself, and frankly some from prior events where we haven’t done proper maintenance.

GRANT: A third of the downtown streets flooded. Cars couldn’t get through. The water gushed over and under the roads with so much force, iron manhole covers were pushed up more than six feet off the ground. Six months later, Meadville is still recovering.
Walker stands by the hole on Market Street. He says the city had to dig up the street, to get to the underground tunnel. Then they had to figure out how to remove the branches and rocks that were plugging it up.

WALKER: This is where we had opened it up to literally drag out the debris. And we had a pulley system, and dragging a bucket, so we can get it to this hole, and then scoop it up with a traditional backhoe, and then load it out.

GRANT: The $150,000 price tag may not sound bad, but for a small city like Meadville, it’s a significant portion of the budget. Thankfully, Walker says, they don’t have to spend money from the general fund. Last year, Meadville started charging residents a stormwater utility fee, to pay for maintenance, and for projects like this. Many call it a ‘rain tax,’ but Walker doesn’t like that term.

WALKER: And, in fact, we try not to call it a ‘tax increase,’ because in fact it is a user fee.

GRANT: Walker says like any other utility ­ water or sewer ­ people are billed by how much they use it. In the case of a stormwater fee, property owners are charged based on the footage of impervious surfaces, such as parking lots and rooftops, on their property. He says rainwater runs off of those surfaces into the public stormwater system.

GRANT: Last January, the average homeowner started paying a new fee, about $90 per year in Meadville. Cities such as Philadelphia, and Mt. Lebanon, south of Pittsburgh, have started charging similar fees.
More Pittsburgh­area municipalities are expected to start considering a stormwater fee this year. We asked a few residents about it at a drug store on the East End. Matt Marquette is lawyer, and a homeowner on the east end.

MARQUETTE: I would support any measure that helps develop the infrastructure and limits any sort of pollution that goes into the river waters, which I think are a great local resource.

GRANT: But others we asked don’t want a stormwater fee. In the greeting card aisle, Cheryl Fuller stopped to disparage the idea.

FULLER: We don’t need another bill, we have enough. As homeowners, gas, light, water, sewage. And now a sewer fee? No. No. It’s time to become a renter.

WILLIS: Taxing rainwater. I know it sounds crazy, but that’s exactly what the state of Maryland is doing, creating a flood of outrage.

WILLIS: So essentially the amount of rainwater that is outplaced by my structure, my building, my house, I get taxed for that. Is that the way it works?

NEUMAN: That’s the idea. They’re thinking the amount of impervious surface on your property, meaning your roof, your driveway, your home will determine the amount of tax that you pay.

WILLIS: I’m telling you, that’s sounds like a ton of dough.

NEUMAN: It is. WILLIS: What kind of money can they raise with this? Boy, they get hooked on that money, they’re going to want even more.

GRANT: Neuman says the stormwater fee is expected to raise $14 billion dollars by 2025 in Maryland. It won’t raise near that much in Meadville, PA. But it’s still a lot of money for some businesses and large property owners to pay.
Cliff Willis is director of the physical plant at hilly Allegheny College. Its stormwater utility bill was more than $70,000 last year. He says not everyone understands why they’re being forced to pay for runoff from their parking lots and rooftops.

WILLIS: In any community, particularly a small community, you’ll have folks grumbling about additional fees, and saying: “Well, we’re just going to move outside of the city limits then.”

GRANT: Willis says there is significant development in a nearby township, outside the Meadville city limits. He says township residents don’t pay for police, fire...or stormwater services. But, as a former municipal engineer, himself, Willis supports the new fee.

WILLIS: I’ve been here about 5.5 years, and on at least 2 occasions, I’ve seen water running down Main Street that is deeper than 6 inches. Yes, there certainly is a need for stormwater management.

GRANT: Meadville has already spent some of the money mapping its stormwater lines. And when a sinkhole appeared in one homeowner’s backyard because of an old line, the city had the $60,000 it needed to build a new one.
Meadville’s Andy Walker says even with money from the fee, they can’t fix all the problems. He says when two inches of rain fell in less than 2 hours last summer, some people wanted the city to clean up water in their homes.

WALKER: And were sort of demanding action, now that they’re paying the stormwater fee. And I had to explain to them, for a storm of that size, no matter what we did you almost can’t throw enough money at the problem to fix and prepare for that size event.

GRANT: Pennsylvania already has a lot of rain and snow, and climate scientists predict larger storms in the coming years. Walker says, even with the new fee, fixing the overloaded stormwater system is going to take decades.

CURWOOD: Julie Grant's story is part of the documentary series, Think Outside the Pipes, supported by the Park Foundation and Penn State Public Media.