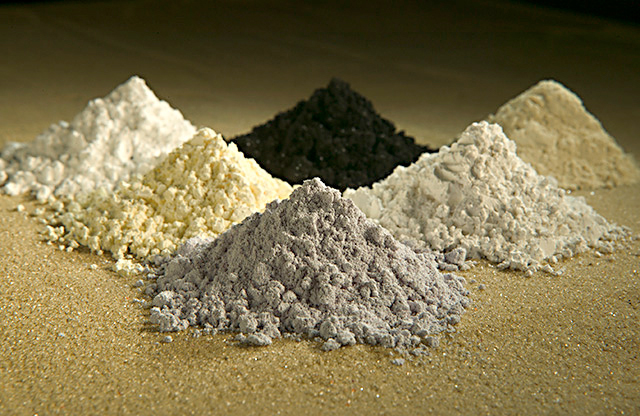 Renewable energy technologies like wind and solar are on the rise around the world, but they depend on a group of metals called rare earths, that are in short supply. Science writer Nicola Jones talks with host Steve Curwood about the scarcity of rare earths and how it could inhibit green energy expansion.

CURWOOD: From the Jennifer and Ted Stanley Studios in Boston, this is Living on Earth. I’m Steve Curwood. At the recent economic summit in Davos, Switzerland, business leaders and delegates spent a day discussing a pressing issue - the economic costs of climate change. This follows on the leak of the latest UN climate report, which warns that countries have dragged their feet so long to tackle emissions that the costs of containing the damage have escalated dramatically.

Emissions are still rising rapidly, yet the alternative energy industry is also growing both in the United States and around the world. Still, many say the new energy sector is not growing fast enough to make much of a difference, and continuing fossil fuel subsidies and high upfront costs contribute to the delay. But there's another factor: the scarcity of what are called rare earths. Science writer Nicola Jones recently wrote a report for Yale's E360 on the importance of rare earths, and why they're in short supply. 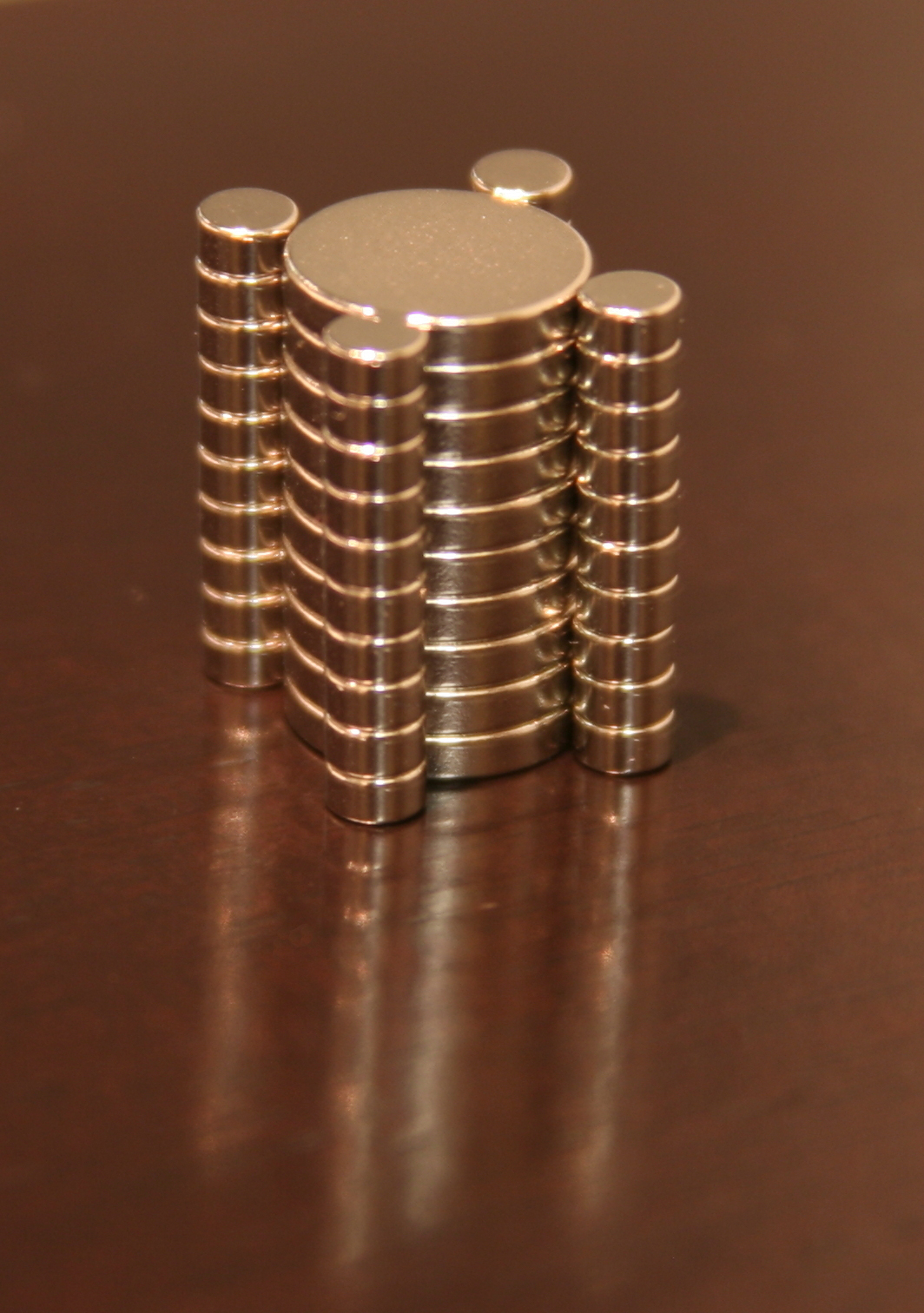 Neodymium is a crucial metal for many batteries used to store energy (photo: TopQuark, Creative Commons 2.0)

JONES: Rare earths is a little bit of a misnomer. They’re not necessarily rare. Basically it’s just a group of elements on the periodic table, and they’re elements that have specific chemical properties that turn out to be very useful in certain renewable energy technologies.

CURWOOD: Why are they so critical?

CURWOOD: What’s the name of the rare earth that likes to make iron a stronger magnet?

JONES: That particular one is neodymium. They all have quite strange names, you’ve probably never heard of most of them before.

JONES: Some of the others are things like scandium, yttrium, lanthanum, europium, ytterbium, erbium.

JONES: [LAUGHS] Great names. It’s at the bottom of the periodic table where you don’t normally get to in your high school classes.

CURWOOD: So what’s going on? Why is there a shortage of these, and they’re largely metals if they end in ium. 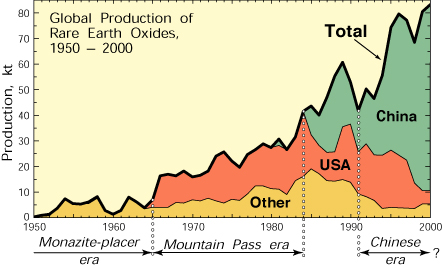 The majority of the world’s rare earths are mined in China (photo: US Dept. of the Interior)

JONES: These are metals, and the problem is both geological and geopolitical. So some of them are physically quite rare. So something like tellerium for example, it makes up only about .000001% of the Earth’s crust, which makes it about three times rarer than gold. Other things, it’s just a supply issue. So, for example, most rare earths, about 97% of them right now are mined in China, and a few years ago China clamped down on trade of these rare earths out to other countries like Japan, and obviously that caused a huge supply issue.

CURWOOD: What impact is the shortage having on the renewables industry?

JONES: Well, I mean, so it makes rare earths very expensive, and that makes some of the renewable things that we’d like to build quite expensive. So, for example, if you’re trying to make a wind turbine, you can make a wind turbine using a gear box, and not using necessarily so many rare earths, and this is an affordable thing to do, and obviously many people make wind turbines. But the gear boxes are quite fragile on these things and often break, so sometimes when you’re driving past a wind farm, you’ll see a couple of them aren’t working, and that’s usually why. So I spoke to someone who said you can make a very good wind turbine without a gear box, but you need a lot of rare earths to do that. That makes a very, very expensive wind turbine, and people just can’t afford to do that right now.

CURWOOD: What does a rare earth do for the wind turbine, by the way?

JONES: Well, again, it’s the neodymium that’s used in the magnets. So things like gear boxes and motors all have magnets in them to help the electricity be converted into mechanical energy.

CURWOOD: I think it’s kind of ironic that all these renewable energy sources depend on mining of these rare earths.

JONES: Sure, everything we make has to come from somewhere. You need stuff to make stuff, and that’s pretty much true for everything regardless of what it is that you’re making. So, mining is a perpetual issue, I think, that will always be true for mankind. 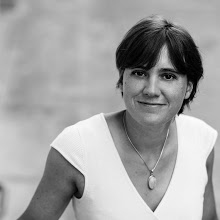 CURWOOD: What are the solutions here?

JONES: So there’s a number of different solutions that people are trying to pursue. So, Alex King, for example, he’s the Director of the new Critical Materials Institute in Iowa, and that institute was founded to try to solve some of these problems, not just the rare earths, but other elements that they consider critical for the same sorts of reasons. And they’re pursuing a number of different solutions. One solution is to try and find or encourage different resources. So there’s lots of different places that could be mining things like rare earths in the world, for example. So those mines are being encouraged to come online.

CURWOOD: Yes, we recently heard the possibility of rare earth mining in Greenland.

JONES: So Alex King told me there are about 450 different possible mines around the world that people are looking into. Two of them are very advanced, one is in California, one’s in Australia. They’re actually online producing rare earths now, and they’re helping to pull some of the control away from China. But, yes, Greenland as well. Greenland’s really interesting because Greenland’s losing some of its glacial ice, which means the people there are getting more interested in mining and also forestry.

CURWOOD: Now, what about the prospect of recycling these materials?

JONES: The recycling is obviously a very good idea. Right now, a lot of former electronics, which is where a lot of the stuff is found, is just thrown away, it ends up in landfill. Something like 10 percent of our e-waste is recycled, and less than one percent of the rare earths is actually recycled. The problem is just the economics of it, although there might be more rare earths in your iPhone than there are in a rock somewhere, it’s very difficult to get it out.

CURWOOD: Now, what about just doing without, phasing these out, making technology that doesn’t require this stuff?

JONES: Sure, and people are trying to do that, particularly with magnets. Again, people are trying to make very strong magnets that don’t need rare earths, or at least don’t need the very expensive, very rare of the rare earths, or need less of them. Those efforts, I think, will succeed in small amounts. There are efforts to try and make magnets without any rare earths at all, and I think that’s a very demanding task, I’m not sure that’s going to happen.

CURWOOD: Well, one could cool the magnets down, the colder something is, the better it conducts.

JONES: Sure, but how are you going to cool things? That requires other things, like maybe helium, liquid helium, and helium is running out. You know, there’s lots of things on the planet that are in scarce supply, or expensive for us to get. So it’s always a matter of trying to balance all these different concerns.

CURWOOD: Nicola Jones is a science journalist who writes for Nature and Yale E360. Thanks for joining us, Nicola.

JONES: You're welcome. Thanks for having me.