Beyond the Headlines – Cheerios go’s GMO-free 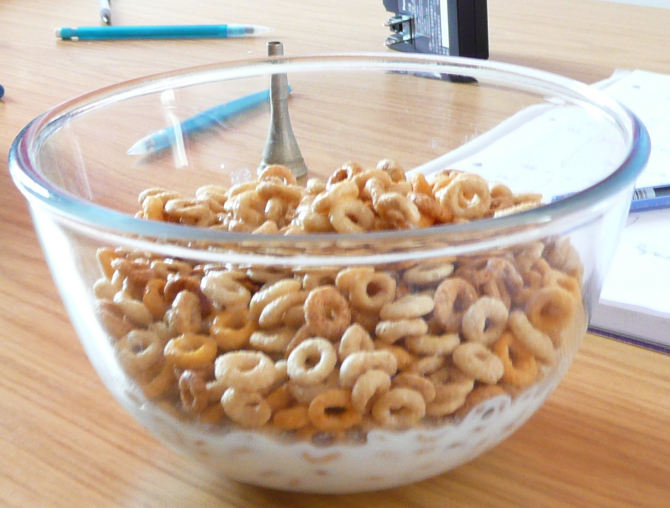 Cheerios, one of the most popular cereals in the United States has always been close to GMO-free because there are no genetically modified oats (photo: Conrad Irwin)

In this week’s trip beyond the headlines, Peter Dykstra brings us stories of a popular cereal going totally GMO free, solar power as a darling of Wall St, and the anniversary of a bizarre industrial accident.

CURWOOD: On the line now from Conyers, Georgia, to look beyond headlines this week is Peter Dykstra, who publishes the DailyClimate.org and Environmental Health News. Hi there, Peter.

CURWOOD: What have you got this week?

DYKSTRA: We’re bringing you some big news from the breakfast bowl. Let me ask you a question. Were you a Cheerios kid growing up?

CURWOOD: Of course, weren’t we all?

DYKSTRA: Well, the world’s most iconic, successful, most enduring cereal brand is going GMO-free, Genetically Modified Organisms. It’s a result after a year-long pressure campaign from some anti-GMO activists. GMO products are ubiquitous, most of our corn and soybean products now are genetically modified. Some scientists and millions of consumers are concerned that it’s just not a good way to play with our food.

DYKSTRA: Ah, you’re absolutely right. That’s a good point. The primary ingredient in Cheerios - I think anyone who’s ever had them knows - is oats. And there’s no such thing as genetically modified oats. They’re not grown. They’re not produced. They don’t exist, and therefore they’ve never been in Cheerios. For the most part, Cheerios were always GMO-free, but their maker, General Mills, has said it’s going to stop using a few side ingredients like GMO corn starch and sugar in the Cheerios that they sell here in the U.S.

CURWOOD: So it doesn’t seem like General Mills is going all-in on being GMO-free.

DYKSTRA: No, it’s more like they want to have their GMO-free marketing cachet and eat their Count Chocula, too. General Mills is going to pitch and label its Cheerios as being GMO-free. But are the other hand, the same company was helping bankroll the defeat of some state ballot initiatives recently in California and Washington state. Those ballot initiatives would have required that any food products that contain GMOs be labelled. The General Mills company website says they favor a nationwide standard for labeling GMO-free foods, but when it comes to labeling foods that have GMOs in them, they want no part in it and they’re actually working against it.

CURWOOD: So, let’s see here; Cheerios has had few GMO issues to begin with, General Mills is on both sides of the fence of this debate. Peter, could this be more about marketing than food safety?

DYKSTRA: Well, it’s like what we said before. You get the most enduring, most successful, most iconic cereal brand in the world, so yeah, marketing might just have a little bit to do with it.

CURWOOD: Well, let’s see, you found a couple of, may I say, unusual headlines from the past week?

DYKSTRA: Yes, unusual because they’re headlines that I simply never thought I would see in my lifetime, and they both hold some encouraging news for clean-energy advocates. First one, Evanston, Illinois, just north of Chicago, the Walgreens chain built an off-the-grid pharmacy, an entire store that does not depend on the electrical grid. Instead they have 800 solar panels, a couple of wind turbines, a thermal system. The whole place not only saves energy, but they generate 28 percent more than the store uses. That same story which appeared in the Christian Science Monitor says that a PNC bank branch in Fort Lauderdale, Florida, has an energy performance that’s just as good. They’re also striving for off-the-grid status.

The one other headline I’d never thought I’d see came straight from the New York Times, and the headline has these words in it: “Solar Power Craze on Wall Street.” The focus is on Elon Musk, he’s the guy that helped start PayPal and make it a success. He founded the Tesla electric car company. He’s a new venture, called “Solar City”, it’s now the largest producer of home rooftop solar arrays in the US. His company’s stock has grown sevenfold since they launched a few years ago.

CURWOOD: Wait a second here, Peter, I seem to remember that a lot of financial “crazes” and bubbles don’t work out so well.

DYKSTRA: Yes, you’re right. I mean, Solar City has arrived financially. This headline, “Solar Power Craze on Wall Street.” is kind of a good thing to put on the wall. But in the end, like a lot of crazes, they might get carried out in a coffin just like the internet bubble and the housing bubble. You can even go back to the 17th century and look at the tulip craze that wiped out investors in Holland, but you can’t succeed financially if you haven’t arrived financially, and here’s a sign that solar may have arrived. 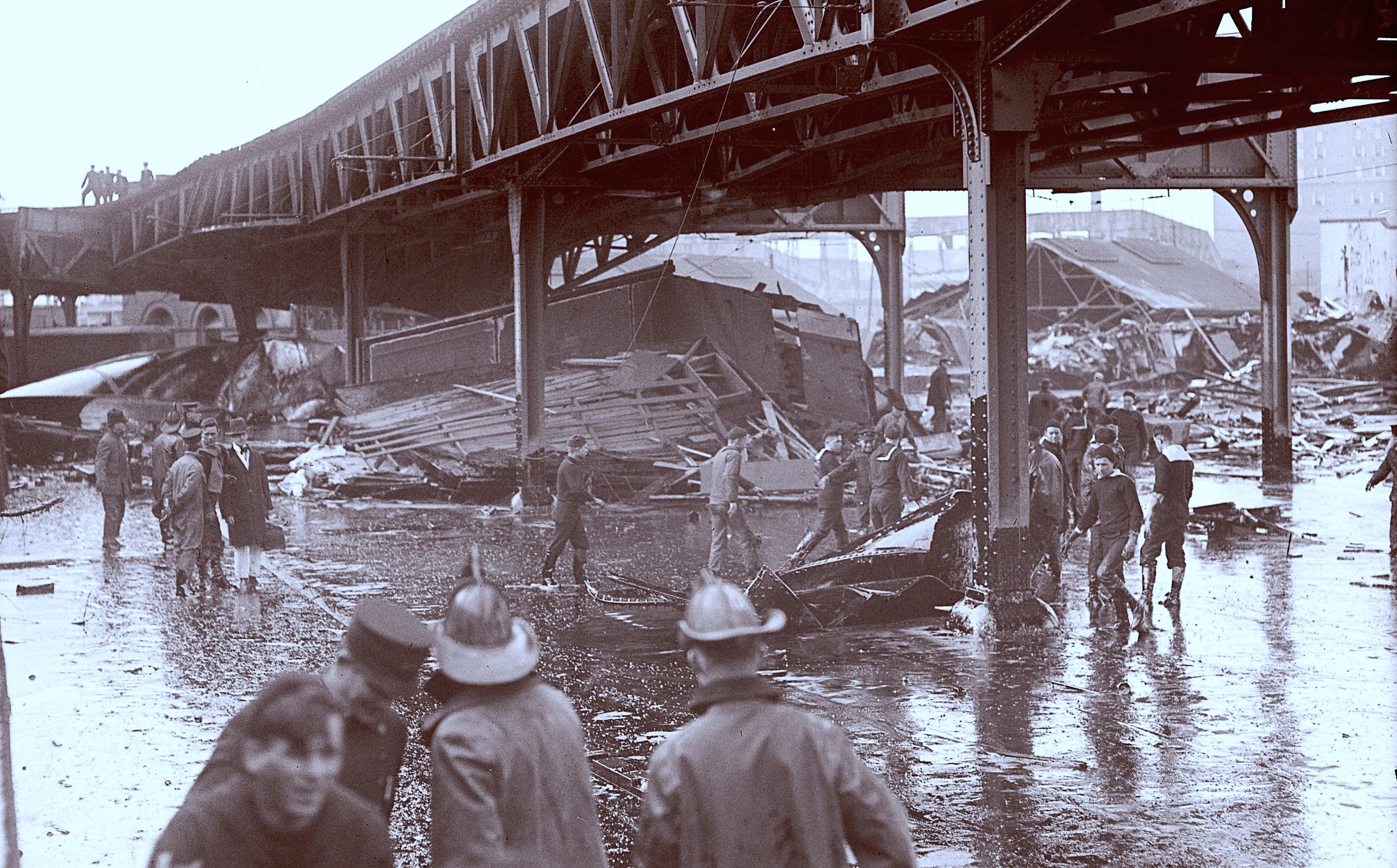 CURWOOD: Finally, Peter, what’s on the anniversary calendar for this week?

DYKSTRA: Well, I’m not going to call it my “favorite” industrial accident of all time because people died in this one, and saying that it’s your favorite is a little bit like hitting the “like” button on Facebook after you read someone’s obituary.

But it was 95 years ago this week, it happened in Boston, it happened not too far from the Jennifer and Ted Stanley Studios where you put the show together, and it was the Great Molasses Disaster of 1919. It happened when the temperature abruptly rose from zero to 40 degrees in just a few hours.

CURWOOD: We've had a fair amount of that this winter right here in Boston.

DYKSTRA: And they had it in 1919 as well. What happened after the temperature rise is that this immense tank full of molasses, this two and a half million gallons of molasses ruptured, it fell apart, the molasses came out, it wiped out two city blocks, flattened buildings and killed 21 people, this fast moving, heavy, sticky tsunami of molasses. Like I said, I can’t call it my “favorite” accident, but it’s certainly one of the most bizarre.

CURWOOD: So it wasn’t moving as slow as molasses in January then?

DYKSTRA: You're right, it's the deadly exception to the rule.

CURWOOD: Thanks so much, Peter.

DYKSTRA: Thanks, Steve, talk to you soon.

CURWOOD: You can find links to all these stories at our website, LOE.org.


Check out the off-the-grid Walgreens

Read the New York Times story on the solar craze