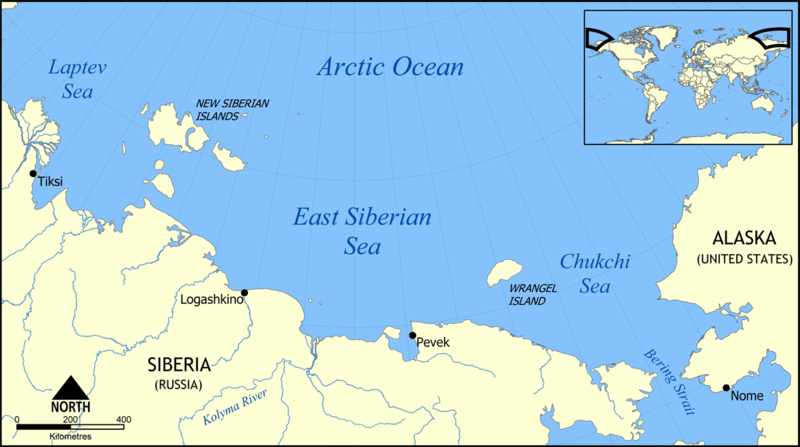 The continental shelf of the eastern Arctic Ocean runs along the coast of Siberia in the Laptev Sea, East Siberian Sea, and Chukchi Sea, west of Alaska. (Wikipedia Commons)

New research based in the East Siberian continental shelf of the Arctic Ocean finds the powerful greenhouse gas methane is escaping from the seabed into the atmosphere twice as fast as scientists previously thought, threatening runaway global warming. University of Alaska professor Natalia Shakhova talks with host Steve Curwood about the research.

CURWOOD: From the Jennifer and Ted Stanley Studios in Boston, this is Living on Earth. I’m Steve Curwood. We begin this week with some startling news from the far north. There are millions of tons of the powerful greenhouse gas methane trapped underwater in the continental shelf of the Arctic Ocean. This methane had been held in place for thousands of years by a cap of frozen soil on the seabed. But now research at the University of Alaska in Fairbanks has found this methane is escaping into the atmosphere at faster and faster rates, adding to global warming in a feedback loop that accelerates the warming. Joining us by Skype to explain is Natalia Shakhova, lead author on the study. Welcome to Living on Earth.

SHAKHOVA: I'm glad to be with you.

CURWOOD: Now your research area was the East Siberian Arctic Shelf. Can you tell me about that? Why is that an important area for this type of research?

SHAKHOVA: The East Siberian Arctic Shelf is important area because it composes a significant fraction of the Arctic Shelf. It is about 25 percent of the Arctic Continental Shelf, and why it is important is because the seabed of this shelf is very thick - it’s a few kilometers of thickness. And this includes in itself the so-called “super carbon pool.” It is covered with subsea permafrost. Permafrost is a frozen ground which is on top of the sediments and they serve as a cap preventing or capturing the methane escaping from the seabed. And because the permafrost was thought to be stable, and reliably preventing this methane escaping from the seabed deposits, this area has never been considered a source of methane to the atmosphere, never until very recently when started investigating this area ten years ago.

CURWOOD: So what were the previous estimates about methane being released from this area of the Arctic, and how does that compare to what you have found in your research now? 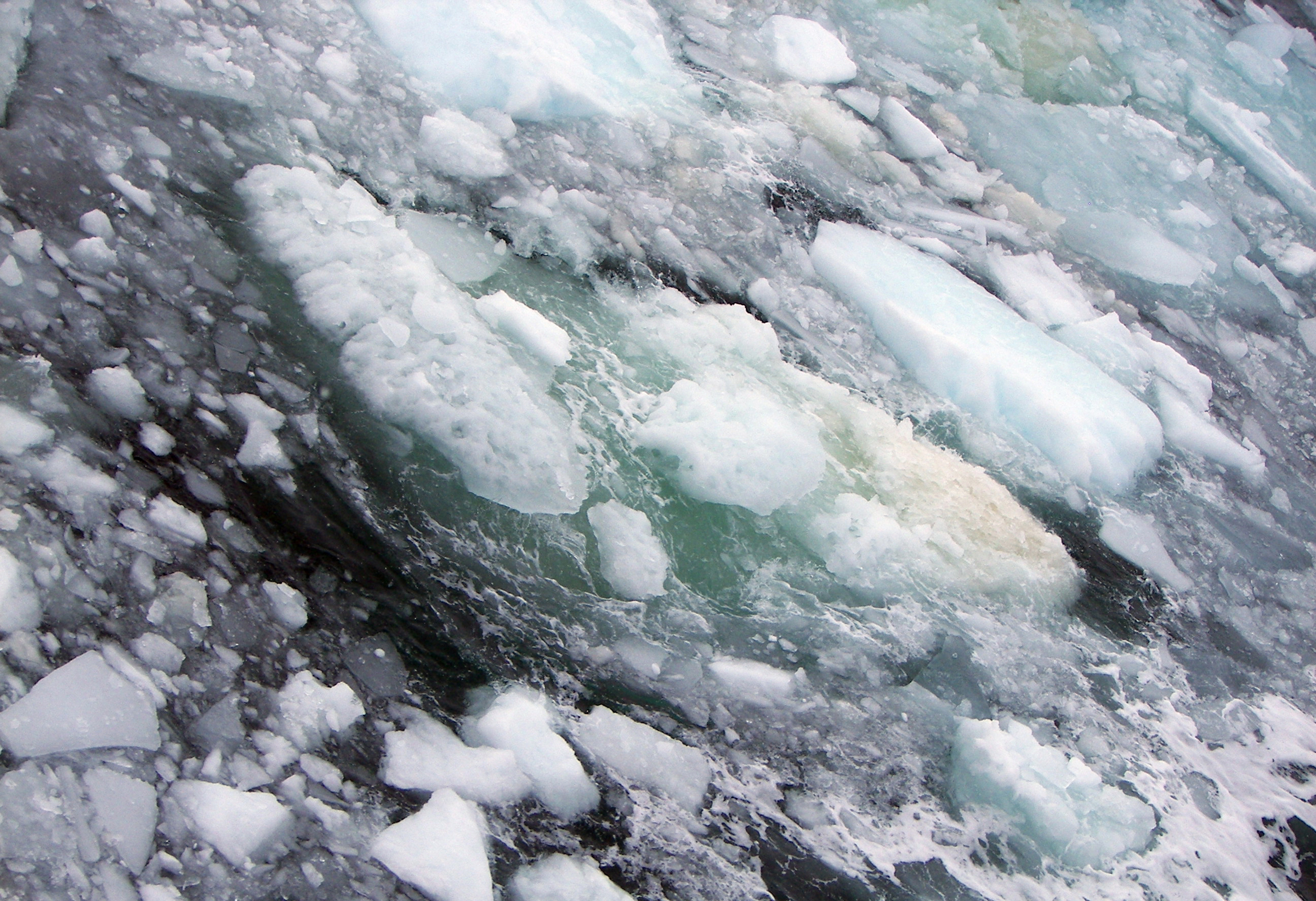 The sea surface above the East Siberian continental shelf of the Arctic Ocean is made up of broken ice and methane bubbling to the surface. (Igor Semiletove, University of Alaska Fairbanks)

SHAKHOVA: During those five years of investigation we accumulated enough knowledge to report about eight million tons of methane escaping annually to the atmosphere of our planet. Now we’re budgeting about 17 teragrams, 17 million tons of methane escaping into the atmosphere of our planet, and this is on par with what Arctic tundra is currently emitting into our atmosphere, and Arctic tundra is thought to be the major source of methane, natural source of methane, in northern hemisphere, so it’s kind of comparable to terrestrial sources and it is even more important I think.

CURWOOD: And why is that?

SHAKHOVA: Important because in other ecosystems, methane, to be released, needs to be produced first, because methanogenesis is the process responsible for the origin of methane. In the sea bed, as I said, this methane has been producing for hundreds of thousands of years, but been prevented from escaping to the atmosphere because the permafrost on top of the sediment has been serving as a cap, as a seal, preventing the escape.

CURWOOD: So if there’s 17 million tons of methane coming from this East Siberian Arctic Shelf, the equivalency for carbon dioxide emissions is what, 20 times as much?

SHAKHOVA: It is at least 20 times as much, from 20 times to 80 times, so if we’re talking the 17 teragrams of methane, and you can do your math, so you’re coming up with much greater numbers in terms of the carbon dioxide equivalent for these emissions.

CURWOOD: Yeah, I mean really, if it’s like 30 times...we’re talking about a half a billion tons of carbon dioxide equivalent.

CURWOOD: So we have triple the amount of methane in the atmosphere today...

CURWOOD: And methane doesn’t last very long in the atmosphere. It’s only there for 10, 20 years before it degrades into carbon dioxide.

CURWOOD: I gather one of the biggest concerns with this increase in methane release is that the Arctic has the potential to become a feedback loop. Can you explain that for us?

SHAKHOVA: Absolutely. Absolutely correct, because warming of permafrost leads to its failure to prevent the carbon pool from releasing, and the carbon pool, and in particular the methane, which is ready to go, which has been accumulated for a long time, is what is releasing. And this methane serves as the greenhouse gas, which warms the planet again, which warms the Arctic. So this is the loop, when the Arctic is warming and releases more methane. This methane source to warm the Arctic, and this is how it’s this chain closes.

SHAKHOVA: This is exactly how it works.

CURWOOD: This all sounds very scary. I mean, methane’s a very powerful greenhouse gas, and if it’s coming out at this rapid rate, we could be in a lot of trouble. 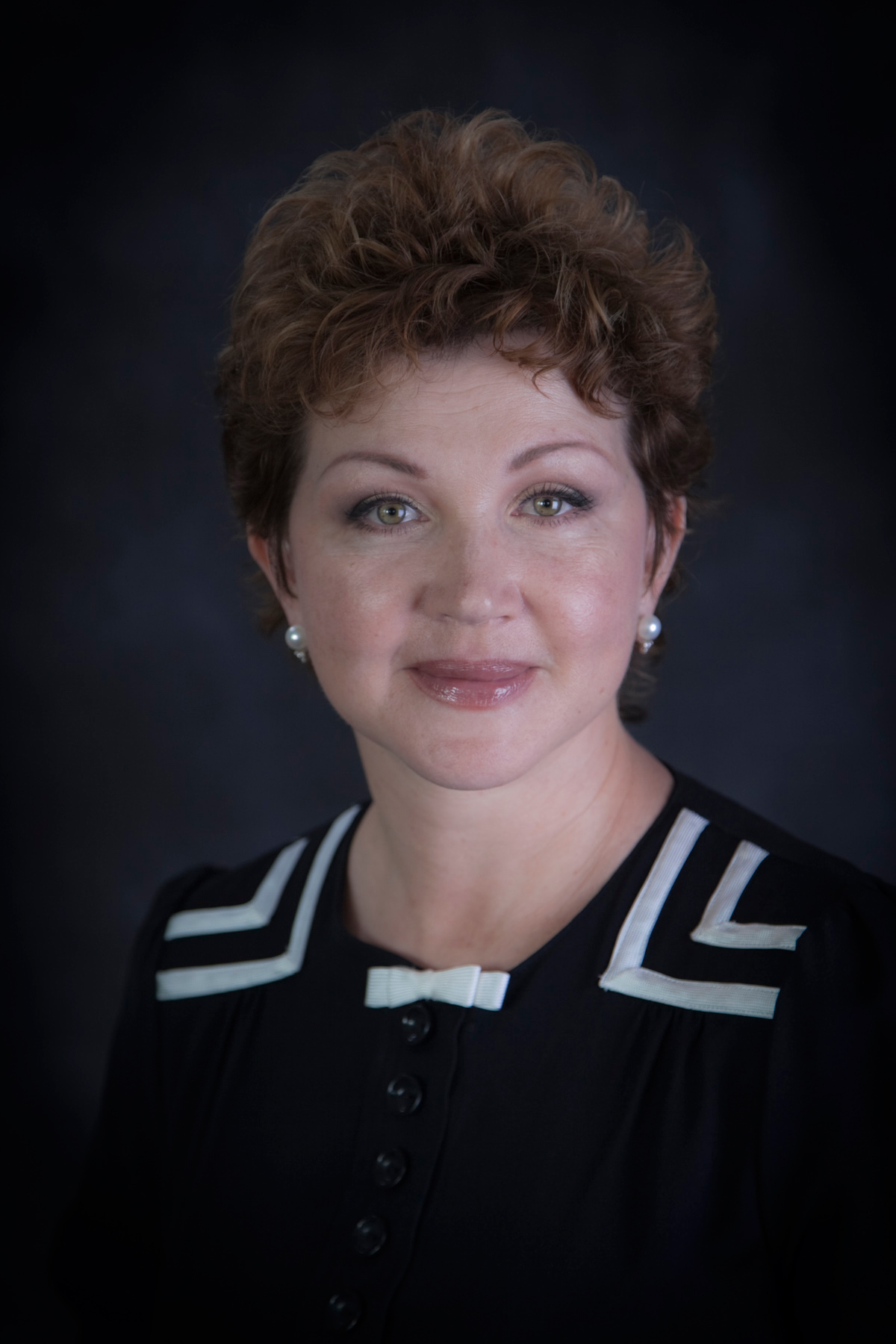 CURWOOD: Natalia Shakhova is Professor at the University of Alaska in Fairbanks. Thanks so much for taking this time with us today.

SHAKHOVA: Thank you so very much for having me. That’s been my pleasure, and my duty to inform you about the things we are investigating.