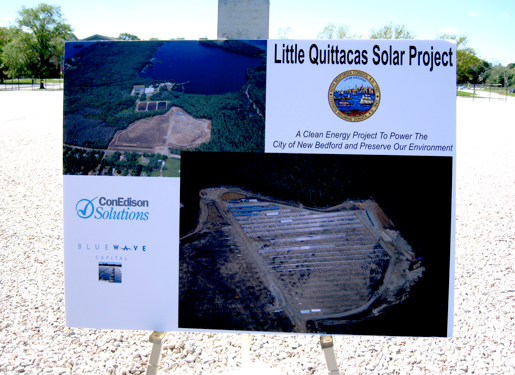 Partnerships between the public and private sectors are turning a brownfield into a solar field and making one city a model for renewable energy development. Living on Earth's Naomi Arenberg returns to New Bedford, Massachusetts, where she reported last year on the start of green initiatives, and now charts the city's increasing success with solar power.

CURWOOD: Last fall we visited New Bedford, Massachusetts, once called “the city that lit the world", due to the vast whaling fleet that brought in the oil that lit lamps in the 19th century. The city has seen disinvestment and high unemployment more recently, but officials decided that energy efficiency and renewable power were key to moving forward. On our 2012 visit, Living on Earth’s Naomi Arenberg found that, despite incentive programs, solar residential projects were just getting off the ground.

ARENBERG: So far, only three homeowners have gone solar with this program, but two more installations are pending, and residents are signing up for solar evaluations.

CURWOOD: Well, a year later, public sector solar has really taken off, and the city is making a big contribution to Massachusetts Governor Deval Patrick’s ambitious statewide energy goal - 1,600 megawatts of renewable power by 2020. Naomi recently went back to New Bedford for our update.

ARENBERG: It’s opening day at New Bedford high school. The parking lot is crowded. Neatly manicured lawns surround the brick building. But between the school and a wooded area to the north, a two-acre parcel was covered with glistening, crushed stone over the summer - an important stage in a toxic waste cleanup.

DEVILLARS: This is a model site for solar development, not just here but anywhere in the country.

ARENBERG: John DeVillars should know. He’s a former EPA administrator. Today he’s among the experts telling high school students and recent graduates about the next stage of the project. 10th graders Chase and Tyler aren’t sure what to expect.

CHASE: I was invited to this event. Apparently it’s about some solar farm that they’re building. I didn’t know about it, but I hope to learn more about it. I think it’s very interesting.

TYLER: Actually, all of us are engineering students and we were all invited the same way. We’re all here because this has an opportunity to make a lot of engineering jobs in the future so it's just like to give us a heads-up.

ARENBERG: That “future” is unfolding right in front of them. Two years ago Massachusetts set up its Clean Energy Results Program specifically to promote energy generation on formerly contaminated land, like this new stone field. 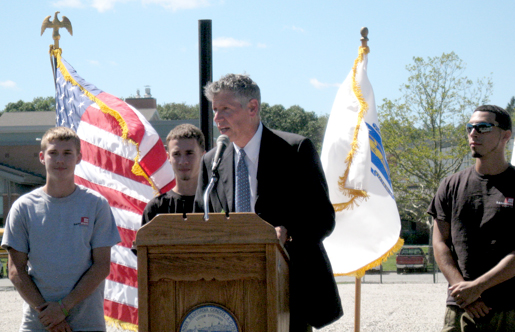 The high school sits on top of the old Parker Street Dump. From the 1930s through the ’50s everything went in the dump - construction waste, household appliances, garbage, trashed vehicles. Local factories dumped ash, laden with heavy metals and PCBs. Parker Street closed around 1960, and several years later the city repurposed some of the land for a new high school. Back then, former dumps were often developed, until the EPA was established and, in the late 1970s, began regulating PCBs.

But now, after nearly a decade of cleanup work, the high school site is deemed safe, and a public/private partnership, involving John DeVillars, is about to construct a solar array on this capped portion.

DEVILLARS: You’re taking a piece of land that has no higher or better use, that’s environmentally contaminated, is adjacent to a middle school and a high school, and by putting solar energy in here you’re cleaning up the site.

ARENBERG: DeVillars now works in the private sector. His firm, Blue Wave Capital, is the renewable energy developer that’s overseeing this project, as well as others in New Bedford.

DEVILLARS: You’re delivering savings and carbon reductions to the city, and you’re providing a great educational opportunity for the kids, and it’s just this kind of site that we should be developing, not cutting down trees or taking valuable farmland, but coming into our inner cities, finding sites like this that have multiple community benefits beyond just the lower electricity costs, and then making it happen.

ARENBERG: During construction, students from the vocational-technical school will apprentice on-site, learning the skills needed to build a solar farm. Once the farm is up and running, by year’s end, interactive “kiosks” in schools will show the kids how much energy the panels are generating and how that compares with other “green” measures, say, some number of cars taken off the road or trees planted.

Teachers are developing a curriculum based on renewable energy and climate change. The idea is to make science classes relevant and to educate students for “green” jobs. And New Bedford’s solar programs are already paying off - literally - in terms of employment. Three of this year’s voc-tech graduates have landed jobs with Beaumont Solar. That’s the inner-city company installing all of the arrays planned for municipal land. Company President Phil Cavallo credits state policy with his firm’s growth.

CAVALLO: The environment here in Massachusetts is fantastic for creating jobs and for creating opportunity for young individuals that are graduating with electrical engineering degrees and mechanical and civil engineering degrees, as well as voc-tech graduates that want to be electricians, licensed electricians in the state, so it’s a great opportunity for the industry and the community.

ARENBERG: Cavallo’s enthusiasm was underscored by another private sector player. Michael Gibson runs Energy Services at ConEdison Solutions, the firm that’s actually building the Parker Street solar farm. It’s a subsidiary of the giant energy company that serves New York City and some suburbs. ConEd Solutions will own the array, once it’s built, as well as the energy it produces, and then sell the electricity back to the city at a competitive, fixed rate. Gibson is a Florida native, and he compared solar production back home with the Bay State’s output.

GIBSON: The state of Florida, the Sunshine State, with a lot more sun except probably today, only has 117 megawatts, half of what you had last year, a third of what you have now, so I mean it’s a clear indicator that proper incentive is a way to drive, to change, on a state level.

ARENBERG: On the public side of the partnership, it was municipal workers who cleaned up this site. They finished the job ahead of schedule and under budget, at half of the one-million dollars allocated. And Mayor Jon Mitchell put a finer point on the city’s accomplishments.

MITCHELL: One of the things that government officials and the private sector are recognizing more and more is that big problems are solved locally. We here in New Bedford are taking control of our own destiny. We don’t care that New Bedford, when you look at income, when you look at other statistics, might be not a community that has a lot of resources. Doesn’t matter. And we work with our partners, both private and public, at different levels of government, to make sure we can pull all the pieces together. Those efforts, those combined, collaborative efforts are producing something that’s not going on anywhere, certainly in this region, and perhaps not even anywhere in the country.

SPALDING: These things happen because people take risks. They lay it on the line. They make it happen.

ARENBERG: Spalding says that there’s no question that the most effective way to address the challenge of climate change is to act locally, at the city level.

SPALDING: Mayors are where it’s at. I wish I could say it was happening in Washington the way we want it to. I think my boss, the President of the United States, would say the same thing I’m saying. It’s not working in Washington, but it is working at the city levels.

ARENBERG: This city has fitted three schools, a public gymnasium, and the Department of Public Infrastructure building with solar panels. By January both the high school project and one that will power the entire water department will be online, a total of 4.3 megawatts in the municipal system. An additional seven-point-one megawatts will be generated by projects awaiting the mayor’s approval. All together that’s enough energy to power just under 2,000 homes. All of this has happened over the last three years, from scratch. New Bedford will soon get 43 percent of its power from the sun - the final goal is 60 percent renewable energy. EPA’s Curt Spalding reminds the students, seated on the folding chairs next to the stone-covered field, that their involvement is key.

SPALDING: My last point is to all you guys sitting to the right and left of me, young men and women. Addressing the problem of climate change will be your lifetime burden. Those of us who are, I dare say, on the backside of our careers, we will move on in the next ten years, but this is the thing you’re gonna have to take on, and you’re seeing a great example of how it can be a passion for you, a job for you, and a way to define your importance in life, your purpose in life.

ARENBERG: The longer the older generation avoids reining in carbon pollution, the tougher the challenge will be for these teenagers. The advice from that older generation on this sunny afternoon is all about collaboration, public and private. Working together will be the way to reduce energy costs, meet the ambitious goals set by the Massachusetts governor, and perhaps help save the planet, one city at a time.