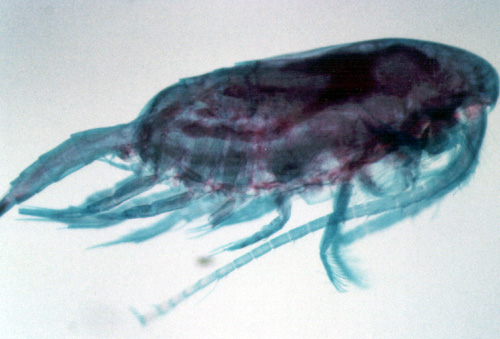 Tiny creatures at the bottom of the food chain have developed an ingenious way of finding mates, as Ari Daniel reports in this installment of Small Matters, the series that sweats the small stuff.

CURWOOD: We stay with the watery and humble, indeed, in this case, even more minute for our next story. Like the question of how coral reefs can be so productive, the mystery of how the littlest creatures at the bottom of the food chain actually manage to track down suitable mates has been a subject that intrigues scientists. Ari Daniel has been following scientists who have been finding some clues, for another in our series Small Matters, which sweats the small stuff.

DANIEL: Finding a mate isn’t easy...even when the backdrop to your wooing is as picturesque as the Damariscotta River Estuary. Here, halfway up the coast of Maine, pine trees run right down to the salty shoreline. It’s in this water, 30 feet down, where our love story begins.

DANIEL: Rachel Lasley-Rasher, a biologist at the nearby Darling Marine Center, tosses a cone-shaped net into the water.

DANIEL: That’s because what she’s trying to catch - the lovers in our story - are copepods.

LASLEY-RASHER: Copepods are small crustaceans, so if you see one under a microscope, it looks really similar to maybe a small shrimp.

DANIEL: They’re as small as a period on a page. And yet their importance is huge - entire marine food webs depend on them.

LASLEY-RASHER: Everything wants to eat you when you’re a copepod.

DANIEL: Baby fish, tiny shrimp….. Lasley-Rasher hauls up the net by hand and pours the contents of the enclosed, tapered end into a bucket.

LASLEY-RASHER: And see what we got. Yeah, I think that’s a Temora.

DANIEL: A small brown speck, a Temora copepod, glides through the bucket water. And here’s the question: in the vast volume of water where copepods live, how does a tiny male speck find a tiny female speck to make more copepods, to keep the food web going? This basic question of copepod courtship kickstarted Lasley-Rasher’s graduate work back when she was a student at the Georgia Institute of Technology. She used to pack up copepods from this estuary in Maine, and ship them overnight to Atlanta for closer examination in this lab – the lab of her former supervisor.

YEN: My name is Jeannette Yen. I’m a professor of biology at Georgia Tech.

DANIEL: Yen didn’t set out to study copepod mating in her lab. Instead, she was using a microscope camera to visualize how different kinds of copepods eat one another - to get at understanding the complexities of the aquatic food web.

YEN: You know, it’s in the dark. And we have a nice, beautiful green laser beam illuminating the copepods - and we see all the guys going around. And all of a sudden, we saw a little guy zoom up, and they spin around in a dance.

DANIEL: It happened again and again - one copepod closing in on another copepod, and then the two of them pirouetting through the water. But this wasn’t an interaction between a predator and its prey. It turned out these two copepods were a mating pair - a male pursuing a female.

DANIEL: It happens in a flash on the screen, but it’s still obvious - every turn, every arc she makes in the water, he retraces. It’s not a beeline approach.

YEN: So then we played around this - we made this stuff called copepod tea where we put all the females in a cup of water and let them perfume it.

DANIEL: Then they took the females out, and dripped the perfumed water into a new container holding only males.

YEN: And he still followed the trail, so we knew it was a chemical.

DANIEL: In other words, as the female swims, she’s leaving behind a tiny filament of scent in the water that lasts for a good ten seconds. And once the male bumps into it, he races along the trail to find her. That filament is only half the length of a toothbrush, but that’s still 100 times bigger than a copepod.

YEN: So that increases the encounter rate, and that’s why this is a survival tactic for these copepods.

DANIEL: Now, identifying this copepod-come-hither molecule has proven somewhat difficult. The lab needs at least a few million individuals to distill enough of the compound to figure out what it is. The most they’ve managed to collect so far is a few thousand, and that took five people working for a week straight.

Still, knowing that copepods produce and respond to a chemical like this is yielding insights into their evolution. Yen says this molecule may help accelerate how quickly new copepod species arise. A simple change in the structure of this chemical could lead to a radically different perfume. So in only a matter of thousands of years, instead of millions of years, you could have two new copepod species on your hands - one using the original scent, and one using the new scent. And it would all be driven by chemistry.

LASLEY-RASHER: Yeah, chemistry is everything to them.

DANIEL: Back up in Maine, Rachel Lasley-Rasher looks out at the estuary. Beneath the surface, many millions of female copepods thread the water with tiny chemical trails.

LASLEY-RASHER: I just like thinking about how they’re experiencing their physical world because it’s so counterintuitive to our human world. I mean, they’re really these millimeter-sized organisms swimming around blind tasting their world, and I just find that kind of fascinating.

DANIEL: Attraction happens at all scales – between granular animals in a watery world, yes, but also for scientists – human beings with big curiosity, drawn to the tiny things all around them.
For Living on Earth, I’m Ari Daniel.

CURWOOD: Our series, Small Matters, is produced by the Center for Chemical Evolution, with support by the National Science Foundation and NASA.