Thabkhe Thabkhe (left) and Ldoe Sangpo (right) are both Tibetan monks from Dharmsala and avid students of science and math at Emory University. (Photo: Ari Daniel)

CURWOOD: It's Living on Earth, I'm Steve Curwood. Many scientists find the bedrock faith of religion troubling. After all, the fundamental basis of science is questioning, and testing hypotheses and theories. And yet, there are some deeply religious and spiritual people for whom there is no split between the questions and doubts of science and their strong beliefs. Ari Daniel had the experience of sharing the search for meaning and truth in science with some unusual young students. His story is part of a series called “Small Matters”, where he sweats the small stuff. In this case, looking at how some build a bridge between faith and reason.

[ZIPPING OF BACKPACK]
DANIEL: I’m sitting with two exchange students who have come here, to Emory University, for a study abroad program. Their names are Lodoe Sangpo and Thabkhe Thabkhe.
LODOE: These are notes from my social psychology class.
ARI ON TAPE: You’ve got a calculus book here?
THABKHE: Right. Right now it’s derivatives...
DANIEL: Psychology, calculus, microbiology. It all seems pretty ordinary for college. Until I tell you what Lodoe and Thabkhe are wearing – floor-length maroon robes. They’re Tibetan monks.
Unlike the tensions that are all too common between science and the Judeo-Christian religions, science and Buddhism enjoy a much friendlier relationship.
DALAI LAMA: I develop genuine respect about the science and scientists. 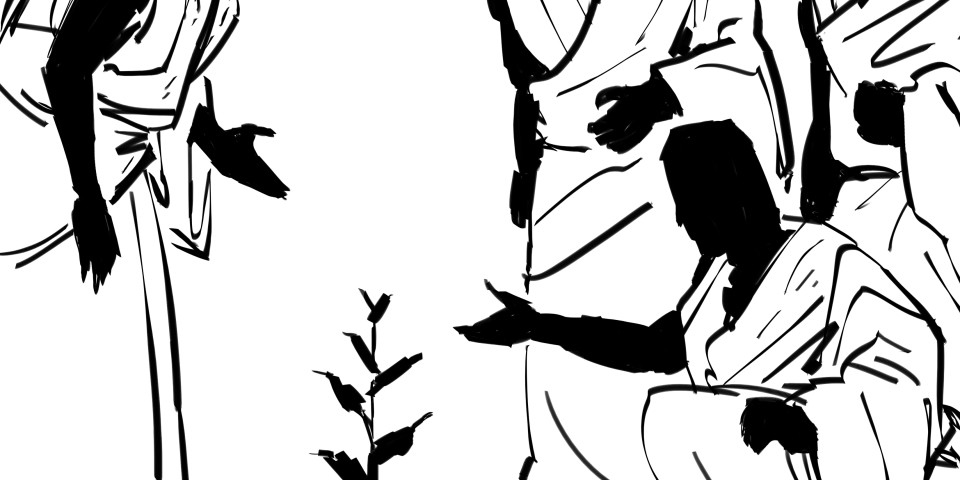 DANIEL: That’s His Holiness the Dalai Lama speaking before an American audience.
DALAI LAMA: Skepticism very necessary – skeptical attitude brings question. Question brings research. Research brings answer. No research, you can’t find the reality.
DANIEL: The Dalai Lama’s appreciation of uncertainty, inquiry, and science has become increasingly important to him and Tibetan Buddhism over the last few decades. And back in 2007, he supported the creation of a rather innovative program on the shoulders of an existing partnership between Emory and the Tibetan community. The idea was for Emory scientists to write an entire science curriculum for a group of Tibetan monks and nuns, and then teach it to them. Arri Eisen was one of the scientists. He’s a biologist who specializes in teaching science, but this was a whole new ballgame.
EISEN: All teaching is a kind of translation, but this is extreme translation that we were doing, crossing so many different borders and barriers.
DANIEL: After spending months honing the curriculum, Eisen traveled to Dharamsala to teach the monks and nuns. He says many of them had never even thought about science, and had never done math before. It was foreign territory for everyone.
EISEN: The first thing we decided to teach was evolution.
DANIEL: Eisen’s all about hands-on learning, so he sent his class of monks and nuns outside to collect plant and animal samples.
EISEN: The monks just went wild up there, having the time of their lives. And then they brought all their collections back, and analyzed their data and showed that, you know, that Darwin was right.
DANIEL: That is, that organisms evolve, adapting to different environments.

EISEN: Not bad for a bunch of monks and nuns.

LODOE: Arri Eisen – he’s one of the professor who all the monk students really admired.
DANIEL: That’s Lodoe Sangpo again. Before coming to Emory in Georgia, he was a student in Eisen’s class in India. He says that his monastery education had consisted primarily of memorization. So he found Eisen’s approach to teaching refreshing.
LODOE: Not just giving a lecture, but also let the students be a more creative and to think and come up with their own idea when you encounter other problems. We learn how to learn.
DANIEL: In the classroom, Eisen also took advantage of something special in the monks’ training. Debate.
EISEN: It’s a kind of combination wrestling match, comedy show, intellectual exercise. So they’re so used to it, you just basically give them a topic and they go to it. And they start yelling at each other, and tackling each other. And they [SMACK HANDS] do that to emphasize their points at the end.
DANIEL: Eisen asked the monks to debate a variety of topics – like whether bacteria are sentient – that is, conscious organisms. It’s an important issue for Buddhists since they believe they can be reincarnated only as sentient beings.
Eisen even engaged the monks and nuns in discussions concerning the origins of life.
EISEN: Getting from non-??living to living, or how do you get from no cells to a cell, that was harder for the monks. It’s still hard for the monks, it’s still hard for us.
DANIEL: Scientists just don’t know how the brew of molecules on the early Earth transformed itself into the first semblance of life. Did a self-replicating molecule form randomly? Was there a flash of electricity that jumpstarted a crucial chemical reaction? Or something else altogether?
The monks have their own creation story naturally, but the thing about Buddhism – the thing that makes it a lot like science, actually – is that if better evidence comes along,
Buddhists will change what they believe. Evidence that, say, rejects their creation story in favor of something else, like a transition from a static chemical broth to something alive. Thabkhe Thabkhe and Lodoe Sangpo.
THABKHE: Buddha himself told: you should follow me through the reason rather than belief. LODOE: So, if there’s no reason and there’s no proof, then we don’t have to believe it. You just discard it.
DANIEL: As for this partnership between Emory and Tibetan Buddhism, though, there’s a lot more to keep than discard. Arri Eisen returns to India every year, and he says the project’s made him a better teacher, and a better person. And the monks say learning science has deepened their Buddhism. It’s a profound example of how faith and reason can complement one another – two friends in search of answers to the same set of questions. For Living on Earth, I’m Ari Daniel.
CURWOOD: Our series, Small Matters, is produced by the Center for Chemical Evolution, with support from the National Science Foundation, and NASA.