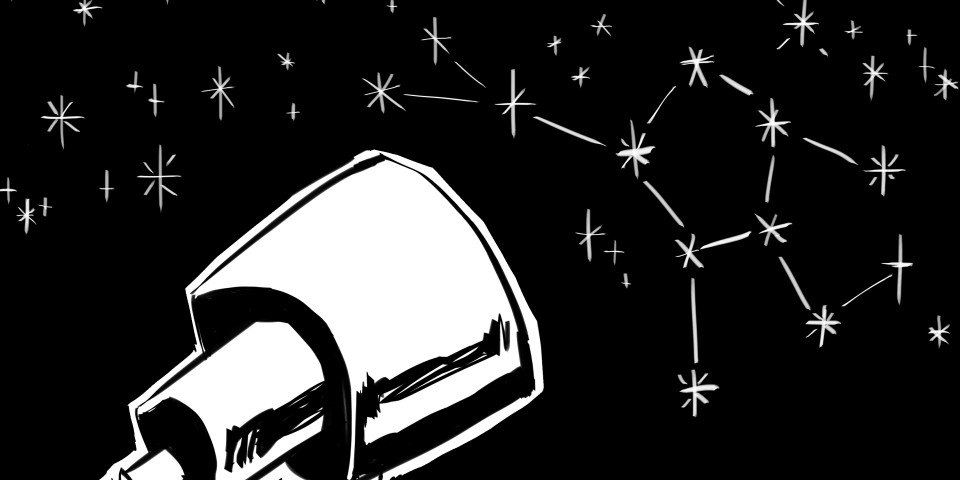 The key to many of the biggest mysteries may lie in the smallest of things. Ari Daniel reports that the origins of all life in our universe could come from the tiny chemicals created in clouds between the stars.

CURWOOD: The key to the most profound realities of our existence may not be found on our world at all. It’s still a subject for speculation and conjecture, but the origin of life on Earth may well be unearthly, and the whole unbounded diversity of existence here may have seeds far, far away. At least, that’s a possibility that Ari Daniel found himself considering, as he contemplated what exactly is to be found in distant clouds across the universe. His story is part of a series called “Small Matters”, where he sweats the small stuff; in this case, seeking the world in a handful of stardust. 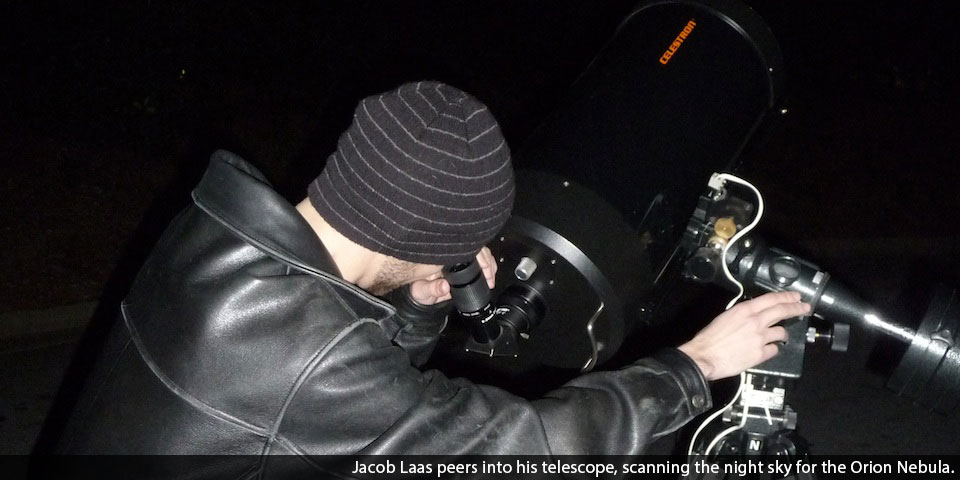 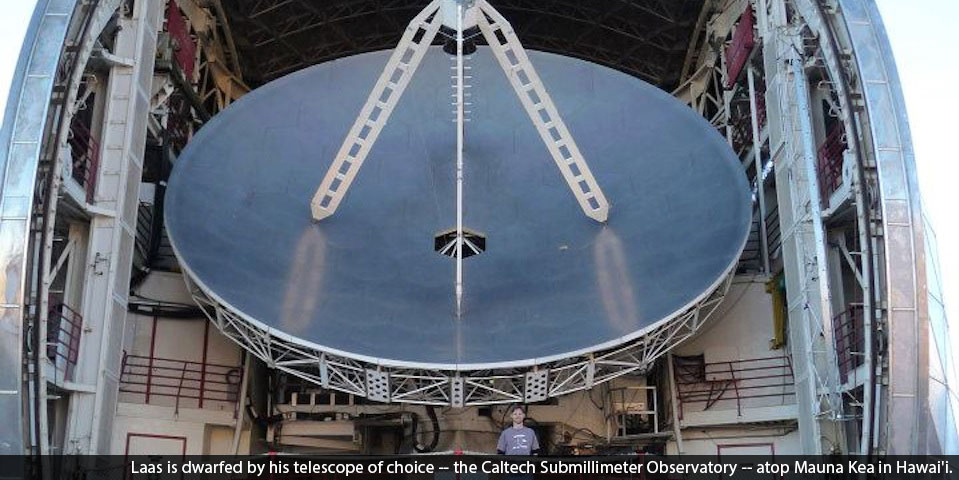 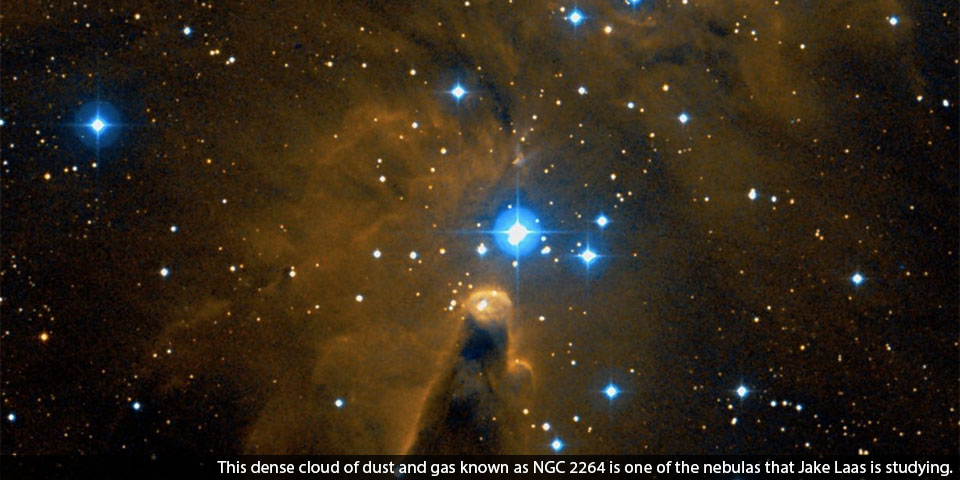 DANIEL: If someone were to offer to meet me in a dark, deserted parking lot in the middle of the night, I’d probably think twice. But I didn’t even bat an eye when Jacob Laas suggested it to me because that was the whole point of our rendezvous...the darker, the better. And that’s because LAAS is a stargazer.
LAAS: Just the expanse of the universe is just amazing, almost incomprehensible to what we’re used to on our day-to-day lives. And so when I look up, I just take it all in.
DANIEL: This parking lot is on the campus of Emory University in Atlanta where Laas is a graduate student in astrochemistry.
LAAS: It’s a good night. Beautiful here.
DANIEL: LAAS studies the molecules of outer space, and how those molecules may have shaped our galaxy and life itself. But first things first - we need to get our eyes on the sky.
[CAR TRUNK POPS OPEN]
DANIEL: Laas pops open the trunk to his Jeep to reveal his personal treasure.
LAAS: I’ve had this telescope I think since I was about 10 now. You know, I convinced my dad into getting it for me.
DANIEL: This isn’t your average handheld telescope. The whole setup weighs a good 70 pounds. It takes Laas 15 minutes to assemble it in the cold night air. First come a hefty tripod and mounting platform, which secure the actual telescope - a black cylinder the size of a small trash can. Finally, Laas screws a couple counterweights into position.
LAAS: Alright, so everything’s set up.
DANIEL: Laas spins the telescope effortlessly, the counterweights balancing every turn.
DANIEL to LAAS: I feel like you’re playing an instrument.
LAAS: An instrument in the dark.
DANIEL: To get things started, he swivels the telescope towards the half moon. Even from a couple feet away, I can see moonlight streaming out of the eyepiece.
LAAS: Yeah, do you wanna have a look?
DANIEL: I’d love to. Wow, it’s beautiful.
LAAS: Once you have a couple looks at one of these things, it’s easy to fall in love with the astronomy.
DANIEL: But we’re not out here tonight to look at the moon, as pretty as it is. We’re after something much less obvious. Laas ratchets up the magnification, and swings the telescope towards the bottom of Orion. He scans the constellation slowly until he finds a patch of soft blue mist, something called...
LAAS: The Great Orion Nebula.
DANIEL: And within this nebula, it looks like dark holes have been punched out of the mist. These chunks of darkness are what we’re looking for - interstellar clouds - dense accumulations of gas and dust that sit between stars. The reason that Laas studies these clouds, usually with much more powerful telescopes - is because they’re the site of some pretty remarkable chemistry.
LAAS: The first chemical reaction that takes place in the universe is actually just the formation of molecular hydrogen.
DANIEL: That is, hydrogen gas, or the stuff that exploded so disastrously on the Hindenburg. And hydrogen gas first gets formed inside these interstellar clouds.
LAAS: And so once you get these clouds that start to form more molecular hydrogen, they’ll become thick enough that they’ll help shield the contents to form more rare molecules.
DANIEL to LAAS: Shielding from what?
LAAS: Cosmic rays...
DANIEL to LAAS: So molecules have trouble forming in the universe because they’re being bombarded by this stuff?
LAAS: Yeah, they’re constantly being bombarded by particles or photons that otherwise would just rip them apart.
DANIEL: The interstellar clouds, puffed up with hydrogen gas - provide a kind of protective blanket for other molecules to form, and remain intact.
LAAS: You can start to get CO.
DANIEL to LAAS: Carbon monoxide.
LAAS: Yeah, carbon monoxide. Then you start to see methanol.
DANIEL: The simplest alcohol there is. Gradually, these interstellar clouds get warmer and build up an inventory of molecules. And it’s thought that this process may have seeded the early galaxies - over 13 billion years ago - with a set of chemical building blocks that helped to form meteors, and asteroids, and planets. And even, perhaps, molecules tied to the origin of life.
LAAS: Well, there’s another molecule called glycolaldehyde that is almost a sugar.
DANIEL: That almost sugar is made inside interstellar clouds too, and it’s been shown to give rise to the more complex sugars we see in living organisms today.
Now, this next bit is somewhat speculative, but hear me out. There’s some debate as to whether these clouds are the birthplace of comets - we just don’t have enough information to be sure. But if it’s true, then comets could act as a kind of delivery vehicle for these molecules to get out of the interstellar clouds and end up on planets, like Earth. And since comets are full of ice, we may have interstellar clouds to thank for the watery, life -filled world we see around us.
And this is what captures LAAS’ imagination...
LAAS: That what goes on right in front of us can also occur everywhere else out in the universe that we look at. It’s exciting to me to be able to make these connections between these two extremes.
DANIEL: All you need, says Jacob Laas, is a big telescope to look deep into outer space...and an even bigger amount of ambition, right here on Earth.
For Living on Earth, I’m Ari Daniel.
CURWOOD: Our series, Small Matters, is produced by the Center for Chemical Evolution, with support from the National Science Foundation and NASA.