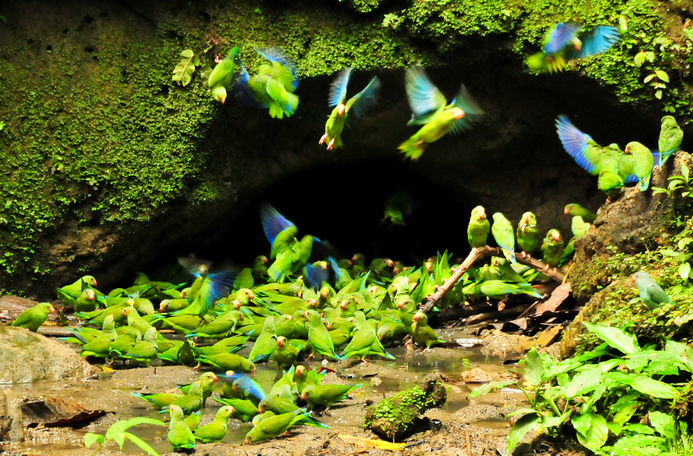 The small area of Yasuni National Park has more species of birds than all of North America. (photo: Joshua Bousel)

Yasuni National Park in Ecuador is home to more species of plants and animals than all of the US and Canada combined. Below the park are billions of gallons of oil. In 2007 President Correa offered to keep the oil in the ground if the international community compensated Ecuador for some of the loss of money it could have made from oil concessions. Kelly Swing, director of the Tiputini Biodiversity Station, tells Living on Earth’s Bobby Bascomb that the first of its kind plan was promising but didn’t work out as many hoped.

CURWOOD: Now back in 2007, REDD wasn't the only game in town when it came to protecting tropical forests. In Ecuador President Rafael Correa side-stepped the bureaucracy of UN negotiations to offer another way for the world to help protect part of the Amazon from development.

Yasuni National Park in the eastern Ecuadorian Amazon is one of the most biologically diverse places on the planet. And it’s not only a rich reservoir of tropical forest carbon, it also sits atop an enormous reservoir of fossilized carbon -- oil. President Correa offered to keep the oil in the ground and not disturb the park if the international community chipped in to compensate his country for the sacrifice…. something like a kickstarter for conservation.

But little money came in, so the president recently decided that his plan isn’t working and gave the green light to begin oil exploration in what's called the ITT block of Ecuador's Yasuni National Park. Here to explain what's going on is Kelly Swing. He’s director of the Tiputini Biodiversity Station in Yasuni National Park, and he told Living on Earth's Bobby Bascomb why this park matters. 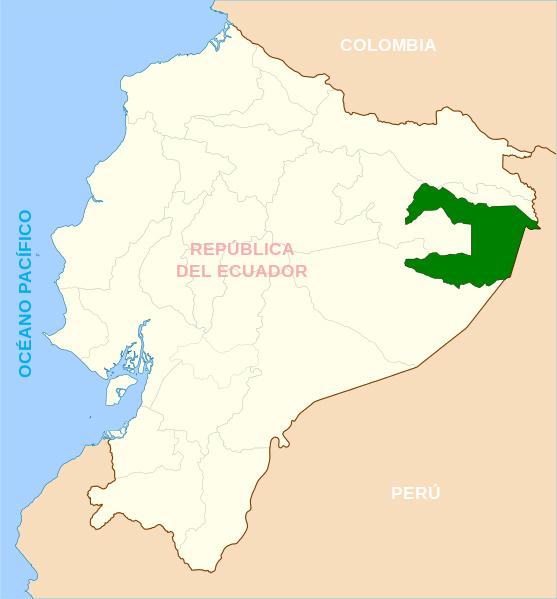 SWING: I tend to say that the reason Yasuni National Park is so special, from a biological perspective, is that there simply are more species there than anywhere else. In a space the size of a football field, basically, we approach 600 species of trees, and in the U.S. and Canada combined there’s only about 560 species. If we look at that same kind of comparison for frogs, for example, 150 species in the space of a few square miles; only about 95 species in the U.S. and Canada combined. Maybe as much as a million species of insects, plants, animals, everything all together in the Yasuni National Park. 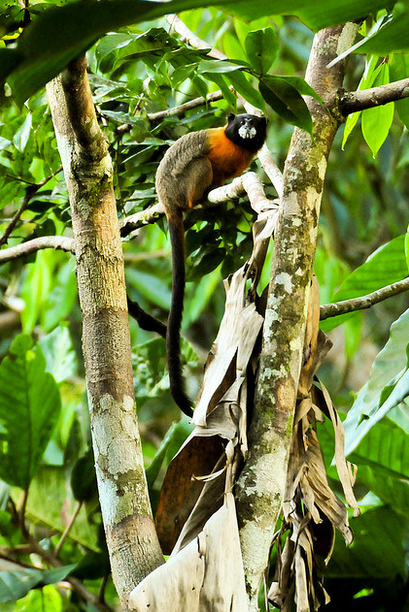 By some estimations, Yasuni National Park may be home to as much as 10% of all the plant and animal species on the planet. (photo: Joshua Bousel)

SWING: Yeah, I’ve (been) working in eastern Ecuador since the early 1990s, so basically about 20 years right here in Yasuni, and there’s always new things to see. I can go out in Yasuni and find something I’ve never seen before in two or three or four minutes, and it just goes on and on and on even after all these years.

BASCOMB: And I imagine, then, if they’re new to you, they’re probably new to science in general.

SWING: That’s correct. If we talk about the insects, in particular, it’s been estimated that 80 percent of the insects have not been described by science. Several years ago, even a zoologist was able to recognize an undescribed species of plant, and it turned out to be actually a new genus of plant! That should be a really good indication that we really don’t know much about this place, and there’s a tremendous amount of biodiversity that need to be catalogued and may actually represent very important values for science and maybe for pharmaceutical products and cures for cancer or AIDS or those kinds of things.

BASCOMB: So, Yasuni is rich in biodiversity, but it’s also rich in oil. How much oil is estimated to be in the ground under the park?

SWING: Yeah, the concession area that’s called the I-T-T Block has most of a billion barrels of oil under it.

BASCOMB: Do you know what is the value of that oil? How much is it worth?

SWING: The estimated market value for the oil that could be taken out of the I-T-T Block, several years ago, estimated at a little over seven billion dollars, but now they’re talking about a value of right around 18 billion dollars. 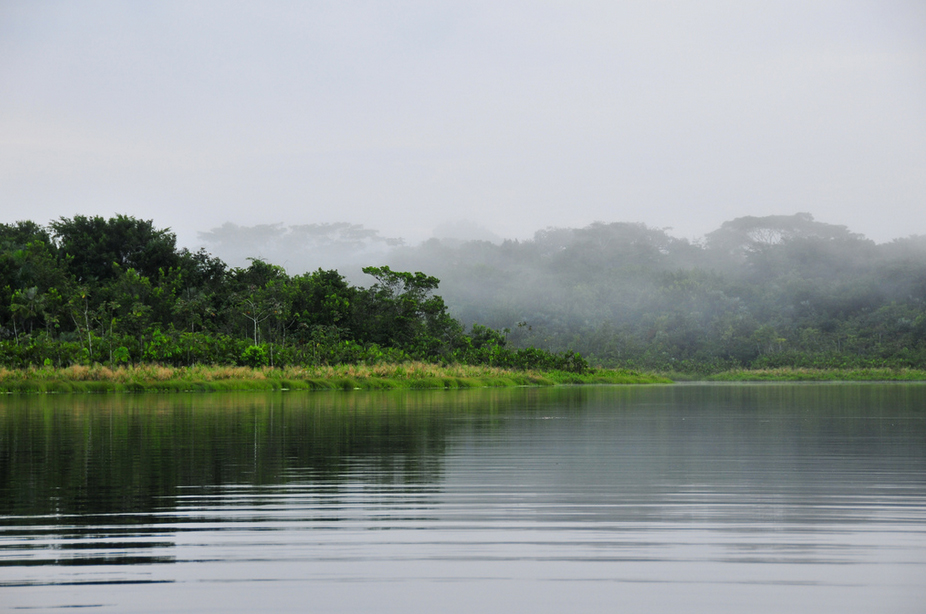 BASCOMB: So, about six years ago the President of Ecuador, Rafael Correa, came up with a plan to make money from the oil but not extract it from the national park. Can you tell me about that?

SWING: Basically the idea that was put forth in 2007 is, was something that was called “The I-T-T Initiative,” and essentially the proposal was that if the world would replace part of the profit that could be gained from extracting that oil, Ecuador would promise not to ever take that oil out of the ground, which would imply that the forest in that area would never suffer the impacts that would occur on the surface. So the idea was that the oil that’s under the I-T-T Block is worth seven-point-two billion dollars, and so if Ecuador could recover half that, three-point-six billion dollars, over a period of 12 years, then the country of Ecuador would forego extracting that oil.

BASCOMB: And so how did that work out?

SWING: The idea got a tremendous amount of positive attention early along, but then there’s been lots of complications. In the end, Ecuador did get some promises of a few hundred million dollars over the last several years, but it’s not a proportion that’s significant enough for the plan to actually work, and that’s why President Correa recently said, “OK, I’m gonna have to pull the plug on this. We need the money, and so we’re gonna have to go ahead and extract the oil.”

BASCOMB: So, why do you suppose so little money actually came forward?

SWING: I think the big reason that the world didn’t support this idea has to do with credibility. Latin American countries in general have a poor reputation as far as governmental stability’s concerned. Ecuador is certainly at a period of instability.

BASCOMB: And, I mean, there’s no carbon credits to be had with this project, either. I wonder if that might be a factor.

SWING: Yeah, one perspective about the Yasuni initiative from the international audience was that it seems too much like a hostage situation, basically an extortion situation. We have, you’re holding this national park for ransom, so you say, “OK, either you give us the several billion dollars or we’re gonna put the park at risk.” Many countries felt very pressured and didn’t want to buy into that kind of scenario.

BASCOMB: So, Ecuador, of course, is a developing country, and I’m sure billions of dollars in oil revenue is extremely tempting in terms of alleviating domestic poverty. But there are also a lot of foreign interests involved here as well. Can you tell me about that?

SWING: Well, some countries, specifically China, are really hungry for oil. Ecuador has certainly already sold oil futures to China, and is indebted to China for billions of dollars already, so I can only imagine the level of pressure from the Chinese oil interests here in Ecuador, but they must be pretty powerful.

BASCOMB: So without the needed money the president has decided to go ahead with oil exploration in Yasuni. What does the public think about that?

SWING: Well, the polls that were done fairly recently, but not since this announcement was made, said that as much as ninety percent of the Ecuadorian people want to leave the oil in the ground, and they want to protect Yasuni.

BASCOMB: I would imagine that this hits pretty close to home in Ecuador. I mean, they’re still dealing with a court case going back to the 1990s, in which Chevron is accused of spilling millions of barrels of oil in the Ecuadorian Amazon and not cleaning it up.

As much as 80% of the insect species in Yasuni National Park have not been described by science. (photo: BU Center for Ecology and Conservation Biology)

SWING: Yeah, the, Chevron, well, actually Chevron bought Texaco several years (ago) and the original complaint here in Ecuador was Texaco, but as a parent company Chevron’s involved now. But essentially Texaco was operating here from the 1970s up until the early 1990s, and during that time there weren’t nearly as many regulations and controls on operations, and so a lot of oil was spilled, you know, slopped around across the landscape. But, yeah, there’s lots of historical oil impacts left over here, and many people have lived through that with direct experiences, and consequently they’re quite hesitant to say, “Well, just let ’em go ahead and extract oil in another pristine area.”

BASCOMB: So, Kelly Swing, what happens next? Is drilling for oil in the I-T-T Block of the Yasuni National Park a done deal, or is there any recourse for the public that’s opposed to it?

SWING: Well, according to the Ecuadorian Constitution, this can be brought to a national vote. The way this works is that there has to be a petition for the government to actually call this to a vote, and the petition has to gather 600,000 signatures. At that point, you know, if it comes to a vote, we don’t know which way it would go. I have a feeling that the government will do some pretty serious campaigning, and Ecuador’s government is excellent at very polished propaganda. I have a feeling, at present, that we are going to see oil extraction in the I-T-T Block in the relatively near future.

BASCOMB: Mmm-hmm. And another part of the Constitution of Ecuador says that nature actually has rights, you know, something akin to human rights. How does this decision, then, to drill for oil in the park, in this portion of the park, square with the Constitution?

SWING: That’s a very good point. The rights of nature, as defined in the Constitution, are basically very similar to the rights of any person. You have the right to exist and to propagate and to reproduce and all these things, and those things are applied to nature here. Despite the fact that this language is available in the Constitution, it hasn’t been tested very well. But I would tend to think that, you know, from the perspective of environmentalists that this may be the time to just absolutely flood the courts with law suits.

BASCOMB: Kelly Swing is Director of Tiputini Biodiversity Station in Yasuni National Park, Ecuador. Thanks for taking the time to talk with me.

SWING: Thanks for giving me the opportunity to spread the word.