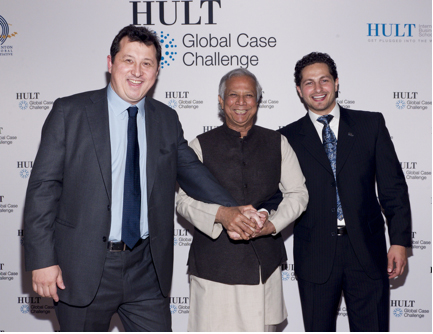 The Hult Prize challenges students to create a workable business solution to a global problem and win a million dollars to make it happen. Living on Earth's Helen Palmer reports on one of the regional finals, won by a Canadian team with a plan to grow, process, and sell edible insects to empower low income urban communities.

CURWOOD: Now, we report on quite a few awards and prizes here at Living on Earth. For instance, the Goldman prize that rewards people who work to counter an environmental challenge or the Macarthur "genius" grants, that often feature extraordinary humanitarians. But we learned of one recently that's rather outside our normal beat but still sounded interesting, so we sent Living on Earth's Helen Palmer to check out the Hult Prize.

PALMER: It all started back in 2009. Ahmad Ashkar, a 22-year-old Palestinian-American was studying at the Boston campus of the Hult international business school.

ASHKAR: And this was following the collapse of the financial markets and really the meltdown on Wall Street, so there was a common mood among business schools that they were the root cause of a lot of the problems that we saw in our financial global economy. 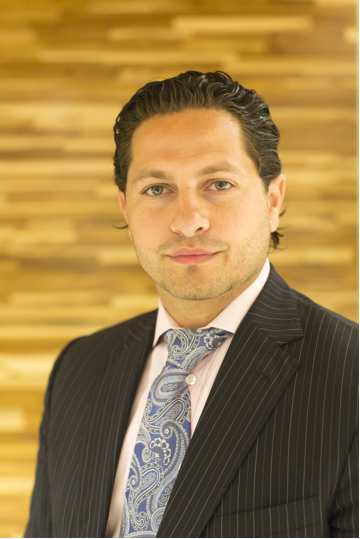 PALMER: And that realization, that it was business school graduate types like him that had broken the global economy, led Ashkar to a kind of crisis of confidence. Then in marketing class one day, he was sitting at the back, not paying much attention, and the guest lecturer was Charles Kane, the CEO of One Laptop per Child.

ASHKAR: He talked to us about the ability of turning profits by selling products as they do in looking to solve global education challenges through the delivery of affordable laptop computers, and the 'aha' moment hit me that there is an opportunity of actually doing good, bridging borders and having social initiatives that actually turn profits. 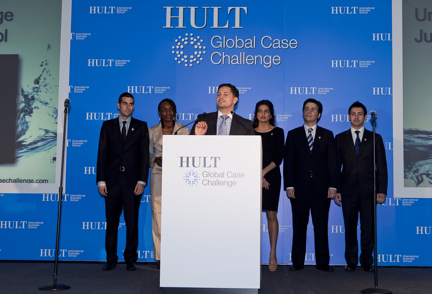 PALMER: And that revelation led him to found the Hult Prize - a challenge to business school students from around the world to dream up a workable plan to solve a global problem - and create a viable, scalable business at the same time. Ashkar networked, he signed up fellow students, he tapped the Hult Business school alumni from all of the school's five campuses in places as diverse as Shanghai and London. He got the endorsement of President Clinton's Global Initiative, and he managed to create an endowment for an annual million-dollar prize.

PALMER: And the Hult competition has taken on huge social issues - education, housing, the water crisis. This year, over 10,000 students set about trying to meet the challenge President Clinton set, to devise a practical way to cut food insecurity and hunger in slums within five years. From all the entries, 268 teams were chosen to compete on the same day in regional finals at one of the cities where Hult business school has a campus - in Shanghai, Dubai, London, Boston, or San Francisco. 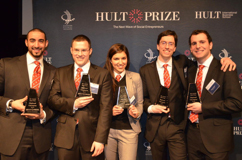 PALMER: On a spring day this year, 48 teams competed at the Museum of Science in Boston. Each team presented its solution to the judges in one of five rooms, which each produced a winner. The Atlantic Room crowned the Harvard Business School’s plan to fortify and brand the cheapest rice so it could be sold inexpensively in developing world by slum entrepreneurs.

HARVARD PRESENTER: We want to supply daily rice to targeted slums. More than that, we want to provide almost all of the recommended dietary intake of key vitamins like vitamin A, niacin, iron - and we can do that by fortifying the rice. So. Quantity, quality, accessibility, and affordability.

PALMER: The ideas the winning teams came up with were ingenious and various. For instance, a novel method of food distribution.

GEORGIA TECH PRESENTER: Our team’s called UbuntuBox, and we’re from Georgia Tech…and we're made up of...

PALMER: The Pacific room's winner was the French business school, HEC Paris. Their plan was to train women in slums to raise fish and greens with aquaponics. Women, they said, prove more reliable.

PALMER: The final winning team in the Milan room came from Canada's McGill University with an idea based on breeding and raising crickets in slums. Crickets can eat table scraps, they can be eaten whole, or animal protein from the insects could be used to enrich flour. They call it Power Flour. And they'd harvest the chitin in the crunchy insect exo-skeletons for agricultural and industrial processes. Their scheme provoked plenty of audience response for their two minutes of question time, and questions like, “have you eaten them?”

MCGILL TEAM MEMBER 1: Would you believe we always get that question? So far, none of us have tried them, but our research partners have and say they taste like almonds.

PALMER: And asked someone else, “are they halal?”

ASHOUR: Oh yes, of course. Get Mohammed to answer this question.

ASHOUR: The answer is yes; if you’re interested I can quote scripture or different schools of thought on the matter. But we’ve actually considered halal, we’ve considered kosher, we’ve considered vegetarians, of course, who simply don’t eat insects of any form, but we still given all of that, I mean we found that there are in fact...

PALMER: At that point, the judges went off to weigh up the finalists and decide which team would get to face off with the other regional Hult Prize winners from Shanghai, Dubai, London and San Francisco. And a local a capella group entertained the audience.

PALMER: Finally the judges came back - and Charles Kane, whose lecture as CEO of One Laptop Per Child inspired Ashkar to dream up the Hult prize in the first place - got to announce Boston's winner.

PALMER: That was the sign for everybody to head to the reception - where there were no crickets to eat - but I did find one of the judges. Sheryl Chamberlain works for the EMC corporation, and she said it had been hard to choose a winner.

CHAMBERLAIN: That was the hardest part. It was listening to these amazing young people that have creative ideas and new ways of solving this problem that we’re looking at, making sure we can feed the world. It’s so hard to decide who should come first and make a decision.

PALMER: In the end, Chamberlain said, all the judges agreed on the McGill team and their small cricket farms in the slums.

CHAMBERLAIN: So the idea of taking crickets and using them for a food source going forward, farming those crickets, eating them whole, looking at different ways to use them, because they give protein in a different way that we have not considered before. So it’s really innovative and watch out - there’ll be crickets flying around your town, and we’ll be grabbing them and using them for sustainable food.

PALMER: As for me, I grabbed some members of the winning team.

PALMER: And we’re missing a couple…

PALMER: Each of them had taken on a different task to get their plans and presentation together, depending on their expertise, they said. For instance, Mohammed, the team leader, studies medicine as well as business. Shevita is a joint legal and business student. And Zev Thompson had a unique role.

THOMPSON: My role was to disagree with almost anything that anyone said. And just try to provide skepticism to everything, and also I did a lot of scientific research in the background. I mean, really, I think we all did everything. It’s tough to split along the lines like that, but that was my main role.

PALMER: Mohammed was pretty sure he knew what his team had that made it stand out and win.

ASHOUR: I think it’s because we bring together a very complementary set of skills, that we challenge each other within the boundaries of a high level of respect, and that our hearts were really into this, especially as we approached this competition.

PALMER: Now the Canadian team, and the teams from Barcelona, Manila, Cape Town, San Francisco and London that won regional finals in the other Hult school cities, are spending their summer refining and polishing and honing their plans, to make them as air-tight and practiced and perfect and actionable as possible. McGill's Zev Thompson.

THOMPSON: And then at the end of the summer, we pitch in New York to the Bill Clinton Foundation - the Bill Clinton Initiative - sorry. And then the winner of the five teams gets a million dollars to trigger their initiative. But honestly, after having the entire summer to focus on refining our project, whether we win or not, we all are committed to moving forward with this project.

PALMER: And that's part of the aim of the Hult Prize - to spark initiatives that can help solve global problems, even for those teams that don't win a million dollars to make it happen. It's certainly worked for these MBA students and their venture, the Aspire Food Group. So watch out; tiny cricket farms will be coming to slums worldwide soon, providing Power Flour and roasted pepper and lime cricket chips.

For Living on Earth, I'm Helen Palmer in Boston, Massachusetts.

CURWOOD: There’s more on the Hult Prize on our website at LOE.org.