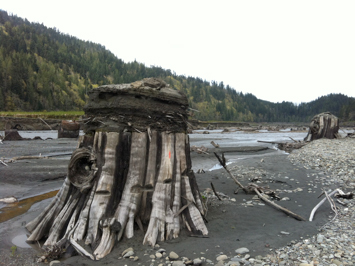 The biggest dam removal project in US history is nearly complete, and fish can swim freely up the Elwha River again. And as Ashley Ahearn of EarthFix reports, salmon and steelhead trout are getting a helping hand upriver.

CURWOOD: It’s Living on Earth. I’m Steve Curwood. Since 2011 the largest dam removal project in U.S. history has been taking place on the Elwha River in the Olympic Peninsula in Washington State, in a bid to restore historic salmon and steelhead trout runs. So much sediment has been released from above the two dams that the final part of the removal was put on hold temporarily. But the murky water hasn’t stopped fish from making the journey upriver to spawn in the reopened habitat. From the public broadcasting collaborative EarthFix, Ashley Ahearn reports, some of those fish are getting help. 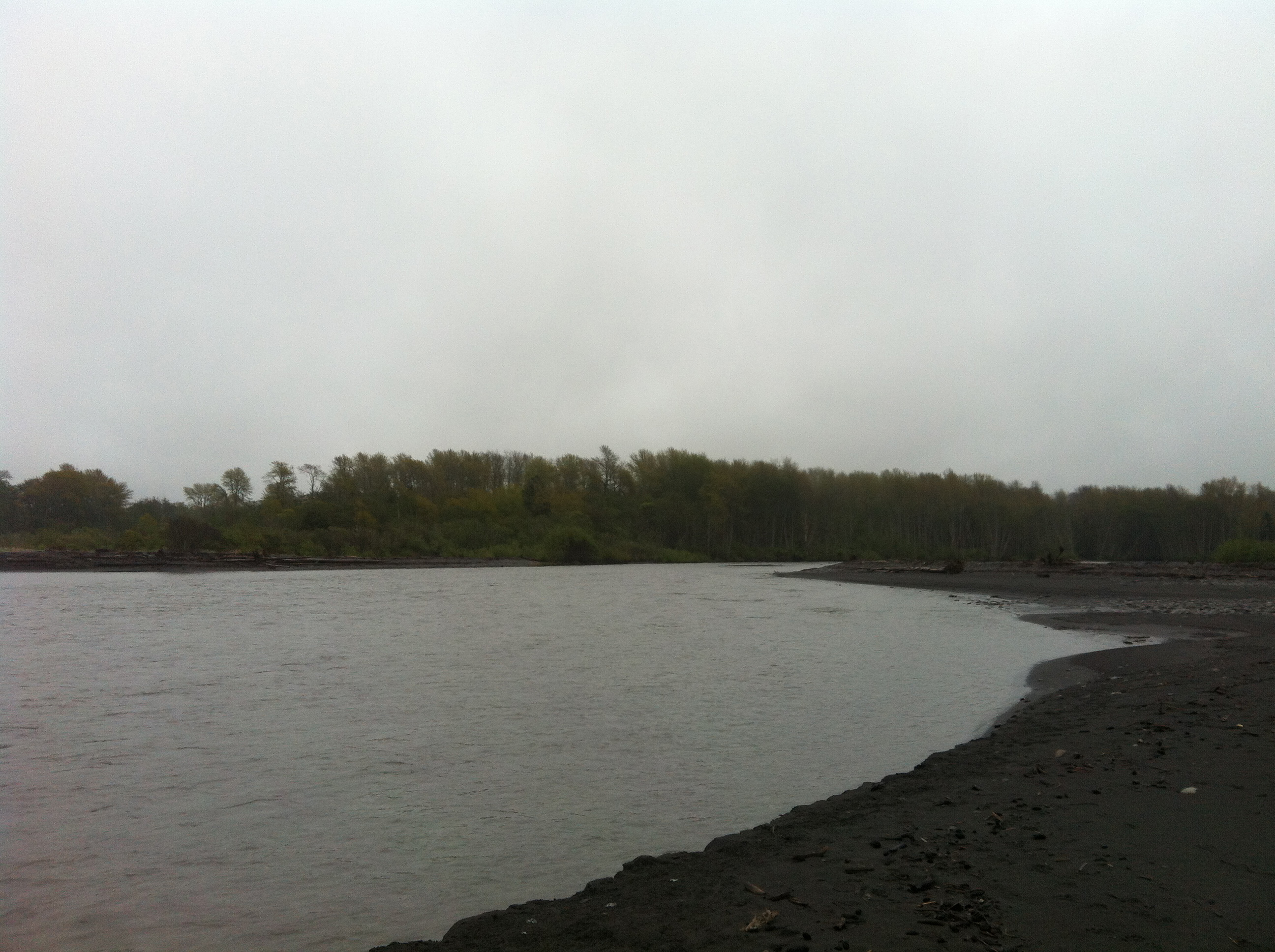 Mouth of the Elwha, where millions of cubic yards of sediment, released from above the dams, are creating new beaches and sandbars. (Photo: Ashley Ahearn/Earth Fix)

AHEARN: Mike McHenry stands next to a water treatment plant and a fish hatchery not too far from the mouth of the Elwha River. He’s a fisheries habitat biologist with the Lower Elwha Klallam tribe. We’re looking down a hill at a murky side channel of the river. I can’t see anything in the water below us until McHenry hands me his polarized sunglasses.

MCHENRY: So put these on.

AHEARN: OK...whoa! In the pool below us, several gray, torpedo-shaped bodies move slowly through the brown water.

MCHENRY: So you are looking at several wild winter steelhead. These are the native remnant stock of the Elwha River.

AHEARN: These fish are some of the last of their kind here. Biologists estimate that there’s somewhere between 200 and 300 wild steelhead left in the Elwha. The fish we’re looking at have just returned from several years in the open ocean, fattening up, dodging killer whales and other predators – and now they’re back to lay eggs in their home river. But Mike McHenry says this murky side channel below the dams is the wrong place to make babies.

MCHENRY: And what we’re going to try to do today is capture these fish, tag them, and relocate them into the Little River, which is a tributary in the middle part of the Elwha River, which has very clean water and high quality habitat.

AHEARN: “High quality habitat” because it’s been locked away, above the lower dam, for 100 years. The dam is gone now, but with so much muck and debris in the water, the fish may need some help making their way up into the newly available habitat. That’s where Mike McHenry’s team comes in. 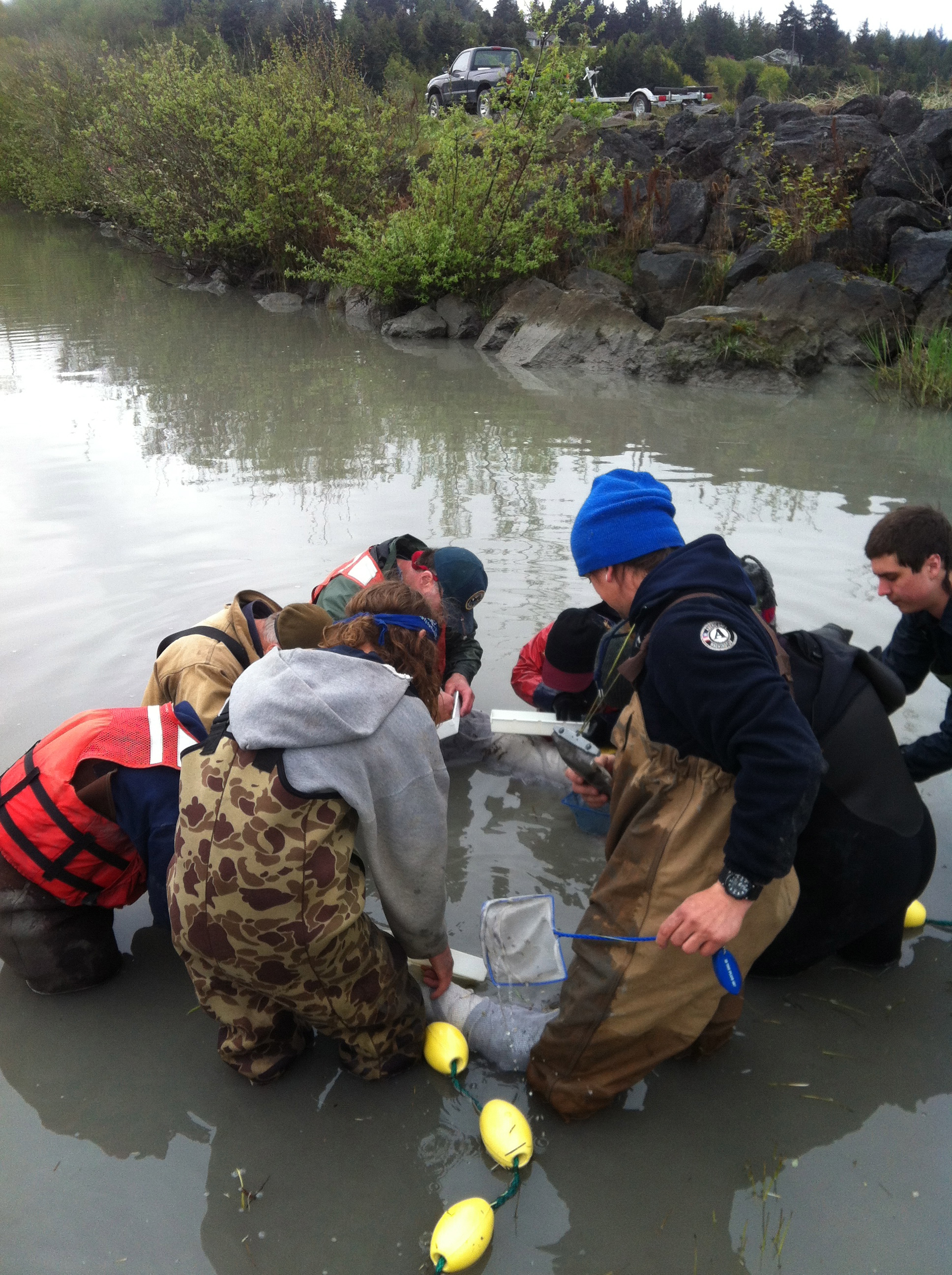 Volunteers from the Coastal Watershed Institute count and measure fish using the newly available estuarine habitat at the mouth of the Elwha this spring (Photo: Ashley Ahearn/Earth Fix)

AHEARN: The biologists net the fish and carry them up the hill one by one, where they’re put in a large tank. There, the team gathers DNA samples, measures each fish and attaches a radio tag so they can keep track of it once it’s released upriver.

AHEARN: John McMillan is a contract biologist with the National Oceanic and Atmospheric Administration and works with McHenry and the tribe. He’s peering down into the tank at a large steelhead. And then he pauses.

MCMILLAN: This is probably brood stock.

AHEARN: 'Brood stock is another term for a fish that has spent time in a hatchery, even though its parents were wild. Hatcheries have been built along rivers around the northwest to supplement wild populations that have been reduced by dams and habitat loss. But research has shown that when some types of salmon and steelhead are raised in captivity they can become domesticated. Other research suggests the brains of hatchery fish don’t grow as big and they don’t produce as many offspring that survive once they’re released. Right now there are two hatcheries in operation on the Elwha River. McMillan runs his fingers along the suspected hatchery fish’s back.

MCMILLAN: We don’t know for sure but this fish has a worn dorsal which is kind of an indicator that it was raised in a hatchery. The fish chew on each other’s fins in the hatchery.

AHEARN: McHenry rests his arms on the tank and looks at McMillan.

MCHENRY: So here’s where we need to make a decision.

AHEARN: Do the biologists bring this hatchery fish up into the pristine habitat above the dam? Or do they leave it here? It’s a decision that government agencies, wild fish advocates and the Lower Elwha Klallam tribe have fiercely debated for years. Here’s the central question: with so few wild salmon and steelhead in the Elwha, should hatchery fish like this one be used as sort of junior varsity subs to boost the overall numbers of fish in this river as it recovers from the dam removal?

AHEARN: The team decides to bring two hatchery-raised fish upstream, along with six wild steelhead. And just to be clear: Mike McHenry and Jon McMillan are not doing anything illegal. In fact, using fish from hatcheries is part of the Elwha River Fish Restoration Plan - and that has sparked a lawsuit.

GLASGOW: We believe that wild fish in the Elwha would recover better in the absence of hatchery influence. You cannot raise a fish in a hatchery without having a negative impact on its genetics and its behavior.

AHEARN: Jamie Glasgow is the director of science and research for the Wild Fish Conservancy. It’s one of the non-profits who filed the lawsuit against the lower Elwha Klallam tribe and several governmental agencies responsible for the Elwha restoration project. Glasgow says that hatcheries aren’t necessary for fish recovery in the Elwha, but if hatcheries are going to be allowed, it should only be for a limited time.

Rob Jones says hatcheries are necessary for steelhead survival in the Elwha. He’s the chief of production for inland fisheries with the National Marine Fisheries Service – one of the defendants in the lawsuit.

JONES: What is very clear to us, crystal clear to us, is that the fish are in such bad shape and the conditions in the river are so unprecedented that any risk that the hatchery poses to these fish is more than outweighed by the benefits.

AHEARN: Jones says the hatcheries will be phased out when salmon and steelhead numbers increase. But the plan does not give a set timeframe or a hard date when the hatcheries will be removed. The science isn’t settled on how hatcheries impact wild fish, though there’s been a debate among fishery managers on that for years. The dam removal going on on the Elwha is truly a grand experiment. No government or tribe has ever tried anything like this before - and no one knows exactly how it will play out. And yeah, right now it’s a difficult place to live if you’re a salmon or steelhead, but it’s not impossible. Last year 500 wild Chinook made the journey above the lower dam to spawn on their own. So far, only a few wild steelhead have made that trip without the help of Mike McHenry and his team.

AHEARN: So, until they’re told otherwise, the biologists will release the hatchery-raised fish with the wild steelhead into the newly available habitat above the lower dam.

AHEARN: McHenry leans down into the cold clear waters of this side creek and unzips a black bag. Two large steelhead slip slowly into the shadows along the bank nearby.

MCHENRY: Moving upstream. We had one going upstream, one go downstream. Based on our experiences they’ll find each other. 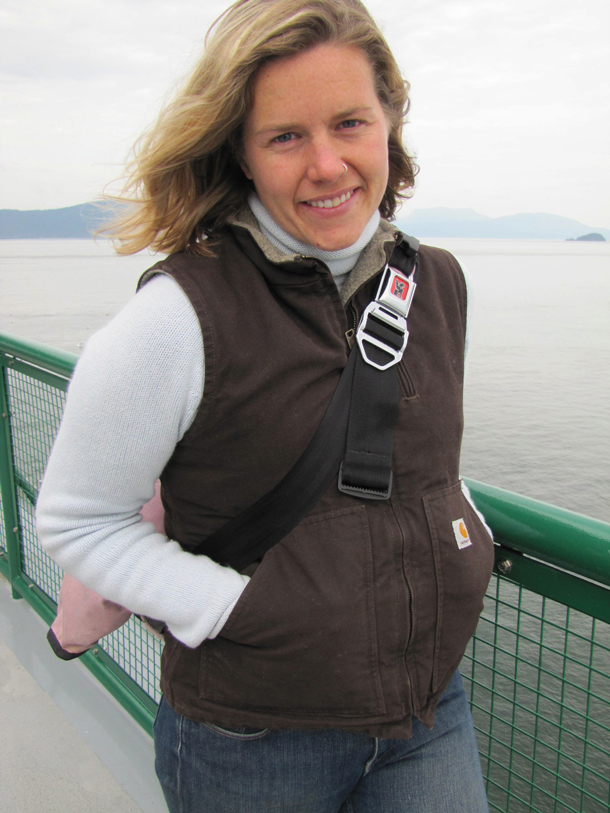 AHEARN: The biologists have DNA samples from all of the fish they’re releasing today – hatchery and wild. Mike McHenry and John McMillan say that will allow them to see who spawned with whom and which pairings led to more successful offspring.

MCHENRY: It’s a mixture, and that’s what we have.

MCMILLAN: Yeah. It’s all we have to work with and you figure that nature will sort it out ultimately. That's what you hope for, that Nature sorts out who wins and who loses and it will.

AHEARN: For right now anyway, nature is getting a little bit of help in the sorting process.
I’m Ashley Ahearn, on the banks of the Elwha.

CURWOOD: Ashley's story comes to us from the public media collaborative, EarthFix.