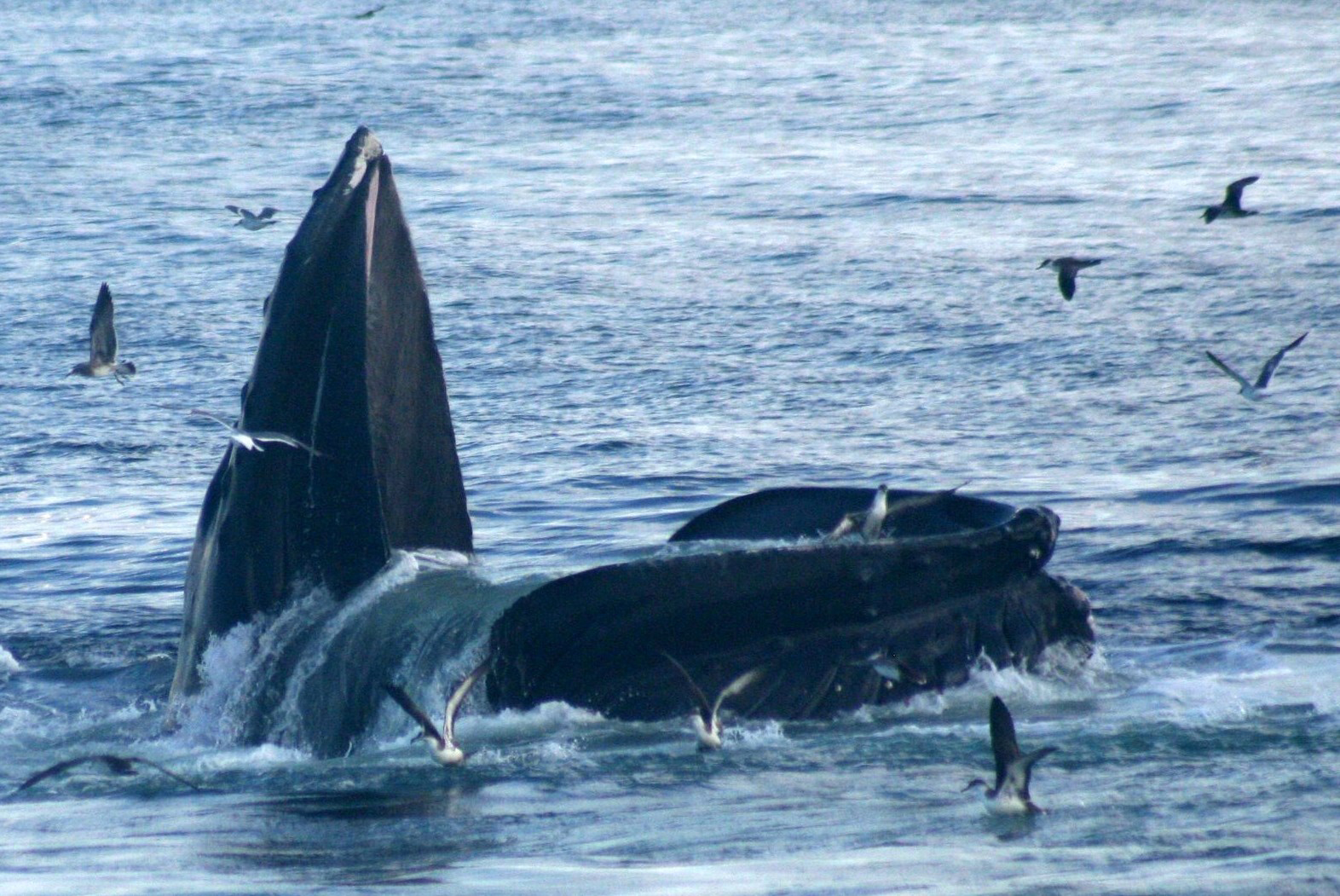 A new study in Science magazines claims that whales in the Gulf of Maine have learned a novel feeding behavior from each other through a form of cultural transmission. Study author Luke Rendell, lecturer in biology at the University of St. Andrews in Scotland, tells host Steve Curwood about the emergence of and reason for this behavior.

CURWOOD: It's Living On Earth, I'm Steve Curwood. As the saying goes, “sharing is caring.” And for a population of Humpback whales in the Gulf of Maine, sharing a new hunting technique with each other is more than caring - changing their hunting culture seems to have helped them survive and adapt to a prey shortage. A new study in Science magazine explains what happened. Luke Rendell teaches biology at the University of St. Andrews in Scotland and is one of the study’s authors. Luke Rendell, welcome to Living on Earth.

RENDELL: Hi, it's great to be here. 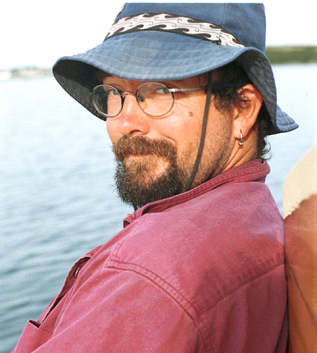 CURWOOD: So how do Humpback whales normally go about finding their food?

RENDELL: So before this new behavior came along, there was something called the standard technique which involved the animal locating some prey and diving down underneath it and blowing a cloud of bubbles around that shoal of prey. For some reason, small fish don't like to swim through bubbles, whether it’s actually physically difficult for them to do it, or because they perceive this big cloud of bubbles as like a big predator or something scary in the waters. So when the whale blows these bubbles, it creates a kind of barrier to the fish, and this helps them gather the fish together in a nice tight shoal that they can then engulf with their very large mouths.

CURWOOD: So how is it that these Humpbacks needed to find a new way to hunt?

RENDELL: We’re not exactly sure. You can imagine it's very difficult to observe, reliably, see in the water what the whales are doing, and what they’re feeding on. Because we know from research fishing...so fishing boats that go and sample how many fish there are of each species in the area, and the National Marine Fisheries Service in the United States does this on a regular basis in the Gulf of Maine...we know that Herring, which had been a major prey for the Humpback whales crashed in the late 1970s. And then in the early 1980s, another species, the sand lance went through a boom. So we think that the need to develop a new or improved feeding technique was related to this kind of shift in prey. 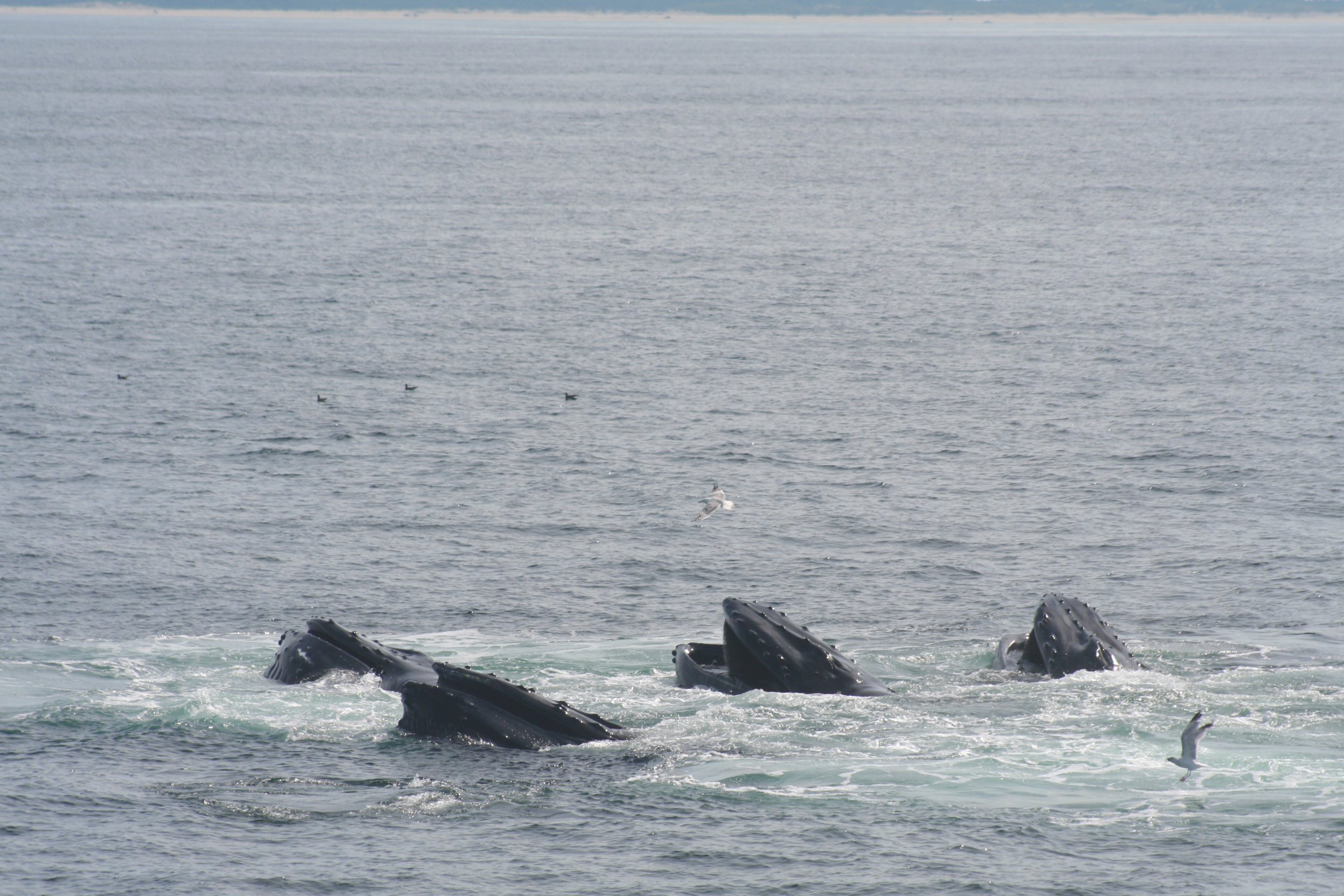 CURWOOD: Please describe for me exactly what the whales did for this new technique?

RENDELL: Well they kind of added something new onto what they were already doing before. So they would already do this bubble feeding, and then they added on a behavior that’s called lobtailing. Lobtailing just means hitting the water with your tail. This is not new to Humpbacks as a whole because they do it all the time in social interactions. What was new is that they stuck it on the start of their bubble feeding sequence. So instead of just diving and making bubbles they would hit the water with their tail a few times and then dive, and make bubbles and go through their normal hunting technique. We don’t really know for sure what function that serves. We think maybe that it creates a disturbed patch of water at the surface, which prevents the fish from swimming and jumping out the way, for example. But that is something we’re not totally sure about.

CURWOOD: And now this feeding method has spread among the whales. 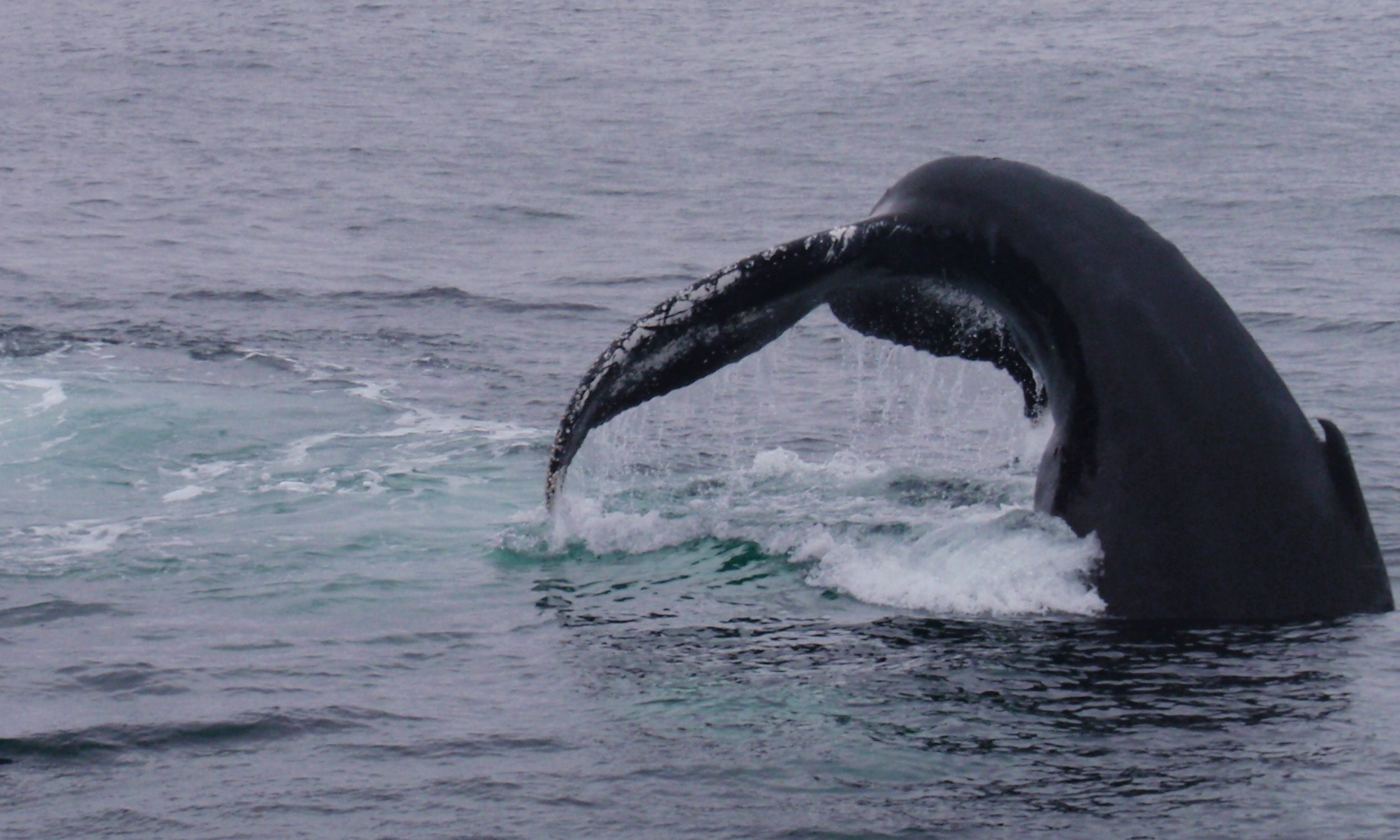 RENDELL: That's correct. Yes, so from one whale doing it in 1980, the current estimates are that somewhere between 35 and 40 percent of the population now know about and do this behavior.

CURWOOD: And your paper says this feeding method is spread among whales by observation. So I'm just wondering how much of a new discovery is it that Humpback whales learn from each other like this?

RENDELL: Well, in terms of actual physical behaviors like this lobtail feeding, then that has never been described before. What we do know, of course, obviously is that Humpbacks are very famous for the songs. In the 1970s, there was a craze of putting out CDs with Humpback songs on them. They’re very striking and famous animal displays, and we know that they learn that song from each other because we've observed population songs changing very rapidly in ways you can't explain in any other way than they are learning the song from each other. So the idea that they learn some kind of behavior from each other is not new, but we had no idea that it would actually involve things like their feeding behavior as well as their song.

CURWOOD: So this is essentially a cultural change?

RENDELL: Yes, so it's culture in the sense that it is learned from other individuals, right? And the pattern of spread that we observed was much better explained if we took the social network into account than if we did not. So animals that hung out together a lot - if you hung out with an animal that knew the behavior already, you were much more likely to learn the behavior yourself. So we don’t actually know for sure whether this lobtailing is functional in the way that I sort of speculated about earlier, or whether it is just an arbitrary thing, right? We just wave our tails this way before we eat. In many respects, from the perspective of understanding it as a cultural behavior it doesn’t really matter whether it’s functional or not. The interesting thing is that is spreading to the population in the way that we seen that it does.

CURWOOD: So how extensive is the whale’s sense of community? To what extent do they share knowledge and behavior widely, do you think?

RENDELL: Well, to really answer that you have to be inside a whale’s head yourself, right? [LAUGHS] But we can deduce from what we observe is that the animals have a very clear sense of their identity and the identity of the group with which they are involved right? So the Humpbacks, each breeding population has his own song, and the animal can very easily know whether it's with its population just by listening to the songs that the males are singing, for example. And we also know there are some long-term relationships, so year on year certain pairs of females will often be seen together on the feeding grounds.

CURWOOD: So what can we learn about other creatures - and I include us humans in that - by studying this behavior in whales?

RENDELL: I think we can potentially learn a lot about the evolutionary history of our species. People have been fascinated about the evolution of the culture in humans for decades. Traditionally they have focused on our closest living relatives - chimpanzees and other great apes as well as monkey species all from the same kind of primate lineage. I think what this study does and a number of other studies that have been coming out recently on whales and dolphins is really question whether that approach is the best one. Whether we should just simply restrict ourselves to looking at our closest ancestors, or whether we can't understand something more about the evolutionary processes that lead to things like culture by looking at completely unrelated lineages.

CURWOOD: I suppose if you study the whales long enough you might find out all sorts of things. I mean, you might find that they switch their food not so much for scarcity, but for flavor?

CURWOOD: Wait, wait. You’re telling me that some Killer whales love red meat and others just won't go for it?

RENDELL: Yes, that’s right. There are fish eaters and mammal eaters. They live in different groups and have different call dialects. And they do not mix.

CURWOOD: Biologist Luke Rendell of the University of St. Andrews in Scotland is one of the authors of a new study about whales and their culture in Science magazine.

CURWOOD: Luke, thanks a lot.

RENDELL: Thanks for having me. It’s been great.