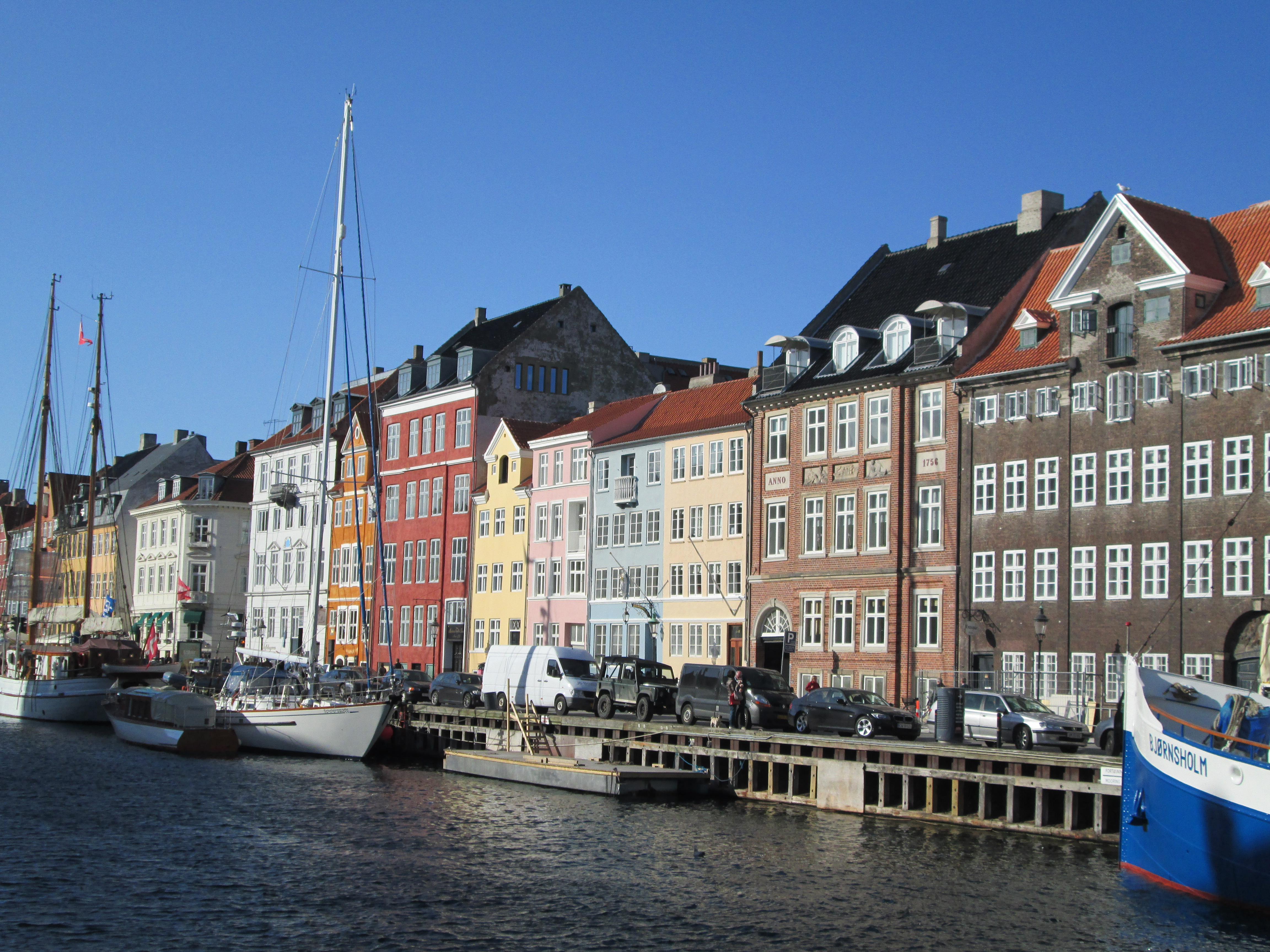 In fall 2012, Copenhagen laid out an ambitious plan to become the world's first carbon neutral capital by 2025. There's still a long way to go, but as reporter Justin Gerdes tells host Steve Curwood, the Danish city has made great progress, with an ocean-water cooling system up and running, a bike super-highway and of course, many windmills.

CURWOOD: It's Living On Earth, I'm Steve Curwood. They call it “wonderful Copenhagen,” and the Danish city has now determined that on a net basis it will stop adding climate changing gases to the atmosphere by 2025. The decision came in an August 2012 city council vote that orders a switch from coal to scrap wood and other sustainable forms of biomass for heat and power. And Copenhagen has also begun to cool its largest buildings using an offshore resource, cold seawater. Back in 2009, Living on Earth's Bruce Gellerman visited the seawater cooling facility as it was being developed with engineer Jan Hoge. 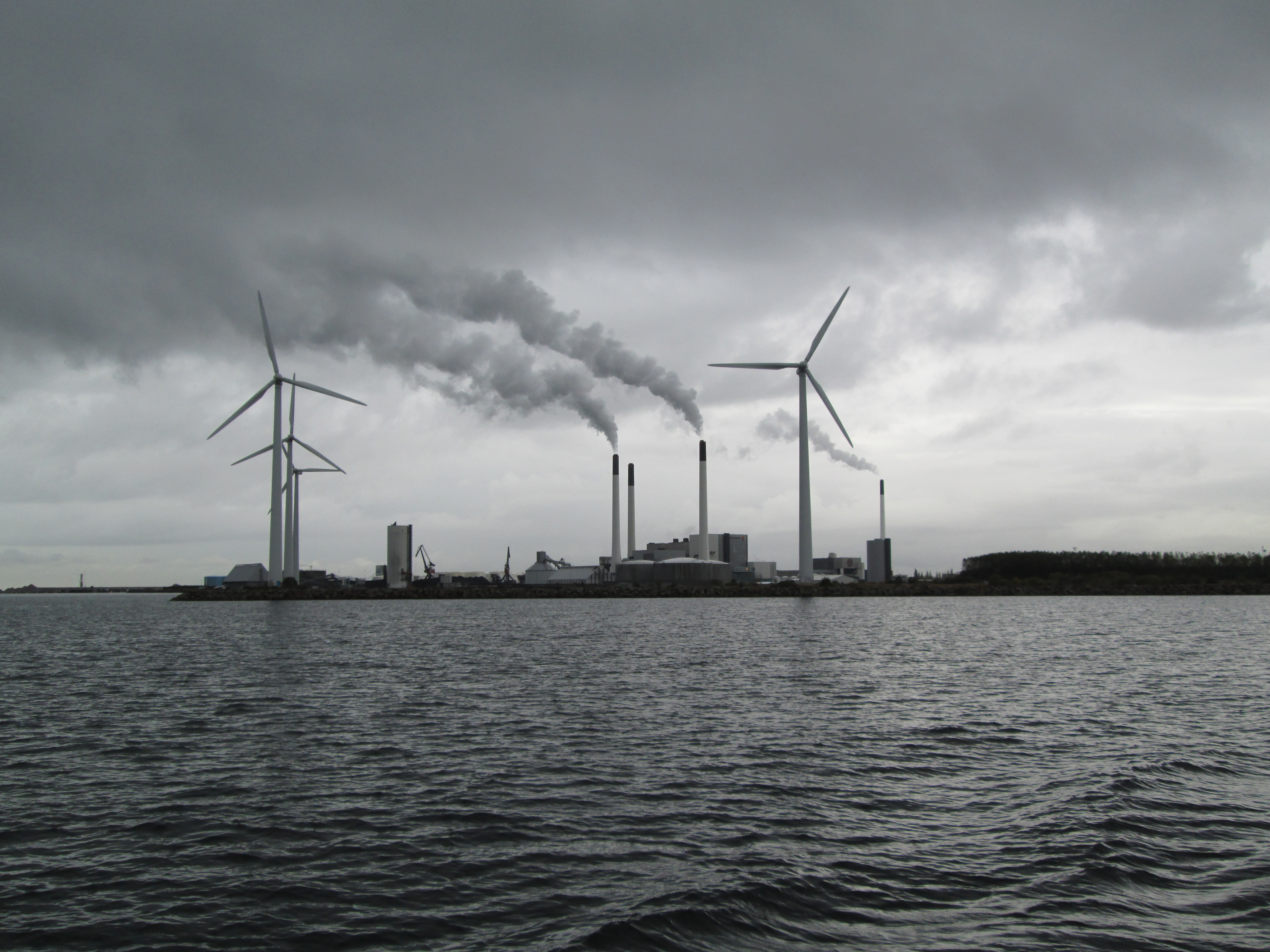 Copenhagen already gets much of its electricity from wind power (photo: Justin Gerdes) 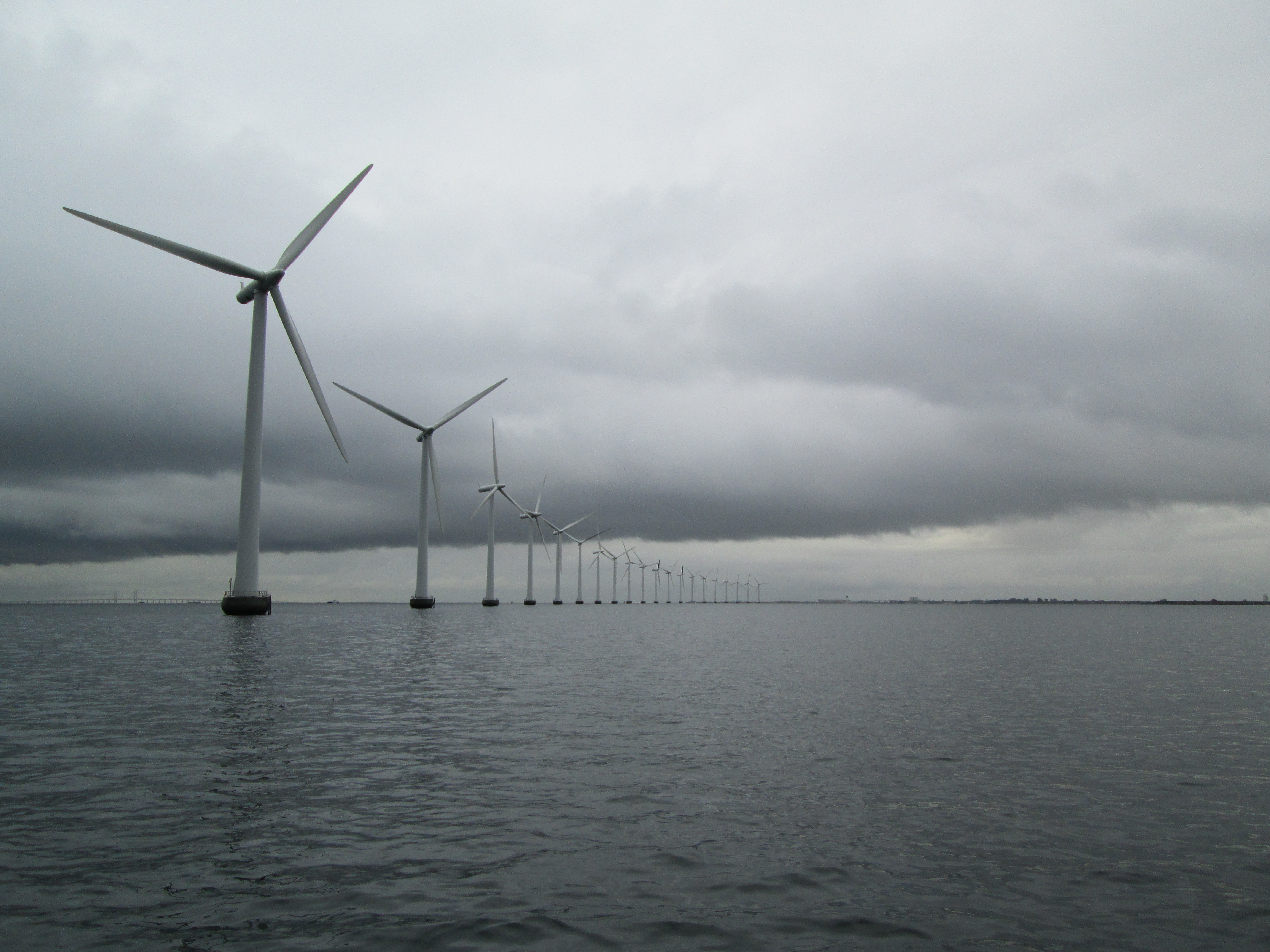 HOGE: If we didn’t have these pipes we didn’t have this project because it would be so expensive for us to put in new pipes in the ground. And although they’re more than a 100 years old, they look fantastic. We just have to reline them and now we use the seawater from the harbor to cool down our chiller units, and through the so-called free cooling. And what is free cooling? You produce cold water purely from the water in the harbor. 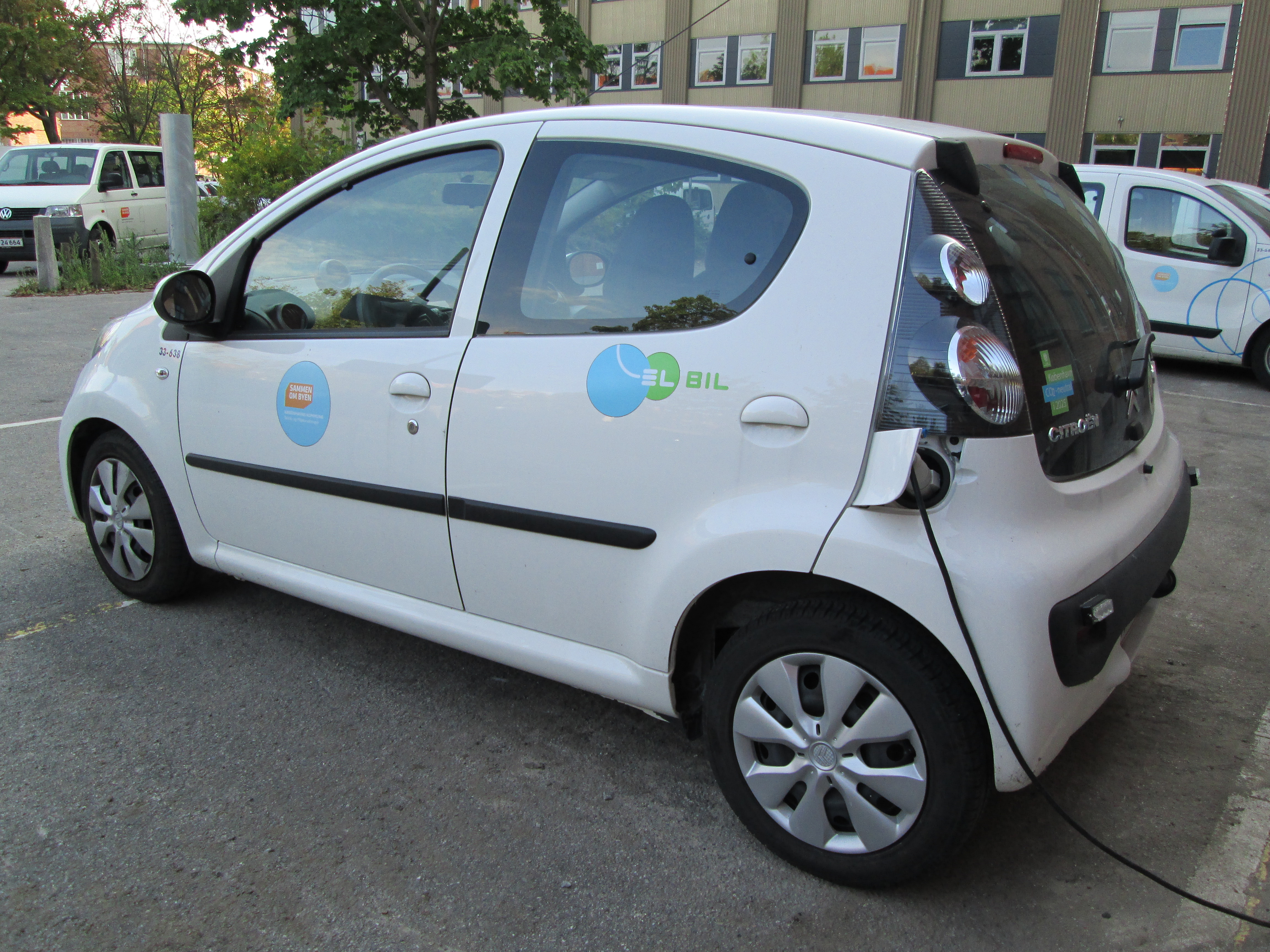 One of the biggest challenges will be getting rid of emissions from privately owned cars (photo: Justin Gerdes)

GERDES: They estimate that doing cooling in this way reduces carbon emissions by nearly 70 percent and electricity consumption by around 80 percent compared to conventional air conditioning.

CURWOOD: And the cooling is used largely for? 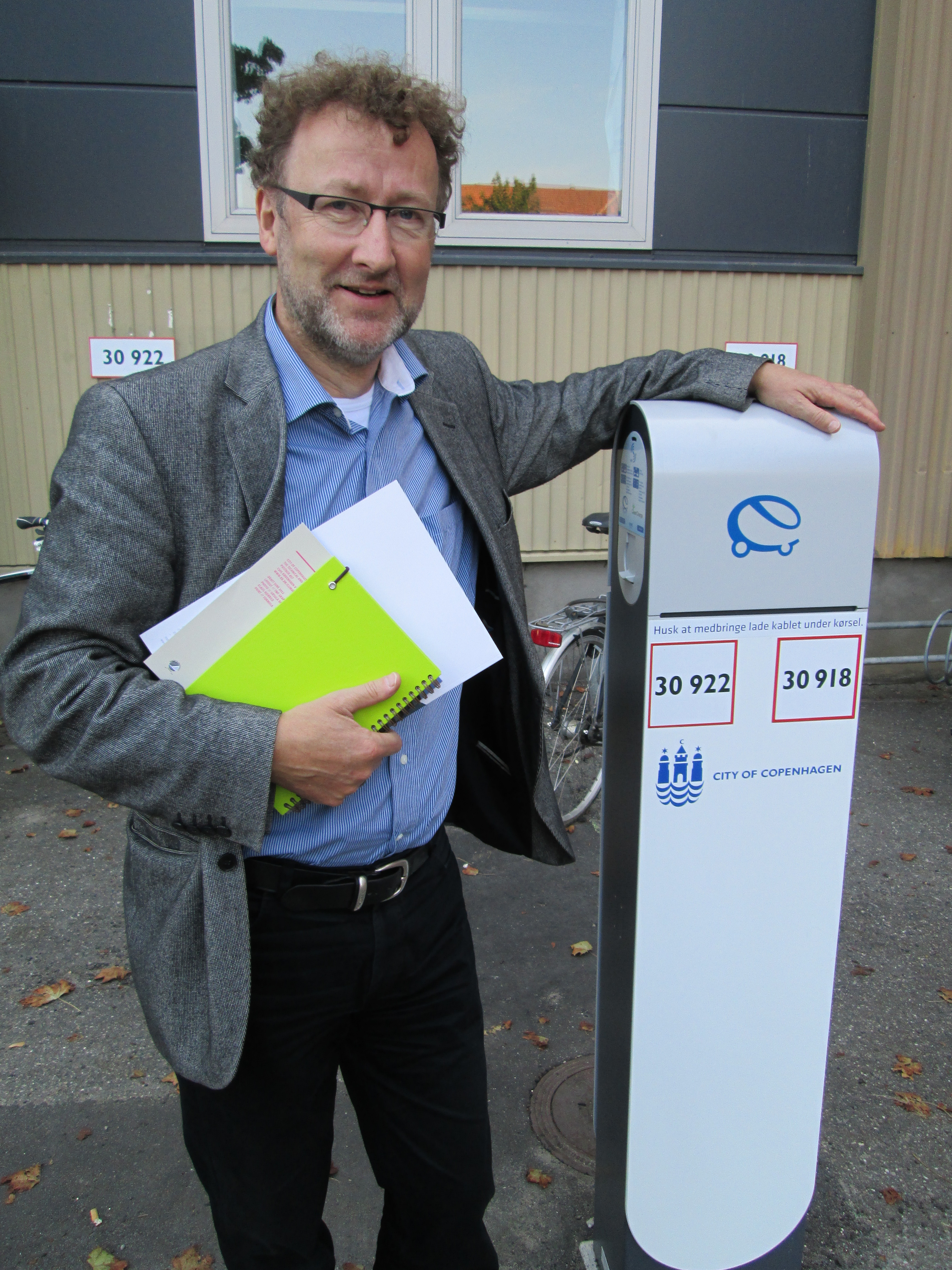 GERDES: For now, it's largely really big buildings, so ones where more people gather. So it's hotels, office buildings, data centers, and right now it's mostly in the city center, but they're going to be expanding the network in future years. But they don't intend to offer it to residential customers. It's actually a very elegant solution in the sense too in that they repurpose the same network of underground tunnels that they use for their district heating system. So this is basically sending chilled water to individual buildings via a network of pipes – so it's not forced air, air conditioning as we would think of it typically used in the United States. 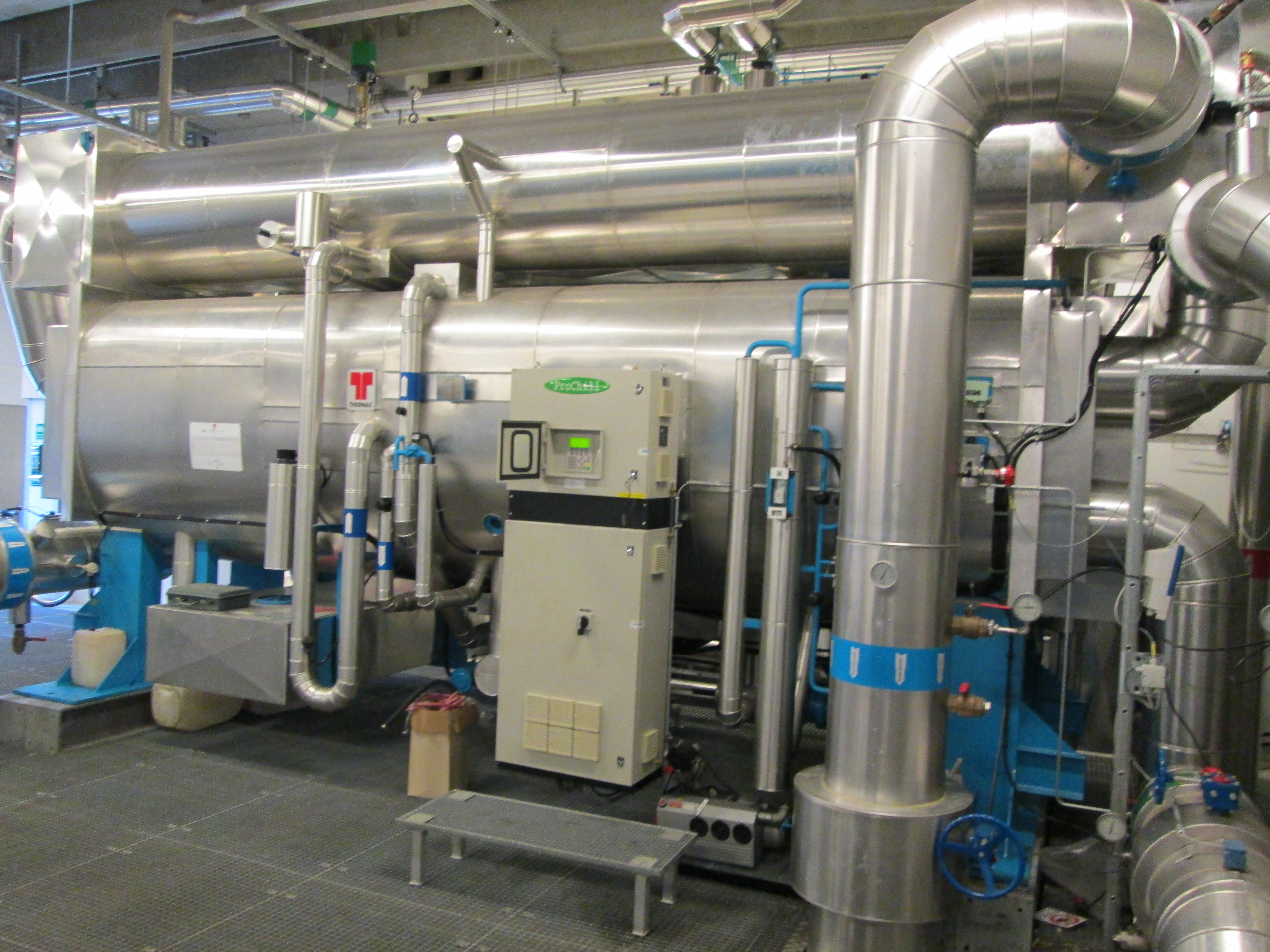 CURWOOD: Of course, when you come into Copenhagen, you see all those wind turbines out there in the harbor. They seem to have a lot of electricity in Denmark. In fact, they might have a surplus. How does this figure into their plan?

GERDES: That is very much in their plans. City officials are basically acknowledging that they won't be able to eliminate carbon emissions entirely within the city boundaries by the timeline, so by the year 2025. And that's largely because of private vehicles. They need more time to convert those vehicles to alternative fuels or electricity. So they're compensating for those emissions by exporting surplus wind from wind turbines located both on and offshore. And they're planning to add 100 new wind turbines over the next dozen years to do that.

CURWOOD: So talk to me about transportation. In reading your article, you say that Copenhagen is going to build a bike superhighway.

GERDES: Yes, of course, most Americans if they have heard anything about Copenhagen, they know it's a bike city. It's one of the world's best bike cities. And they've been remarkably successful - 36 percent of trips in Copenhagen to school or work are made by bike. And for residents in Copenhagen that number is even larger, around half. But they realize they need to do even more to entice residents, and more importantly, people commuting in from the suburbs, to take bikes. And so they're investing money to build up the bike infrastructure. So they're building these so-called bike superhighways. The first of them opened in April of last year, and it connects a suburb north of Copenhagen to the city center. Basically, they're better lit, wide, smooth, bike paths that give these commuters a fast, easy, quick way to the city center and tries to entice them out of their cars. 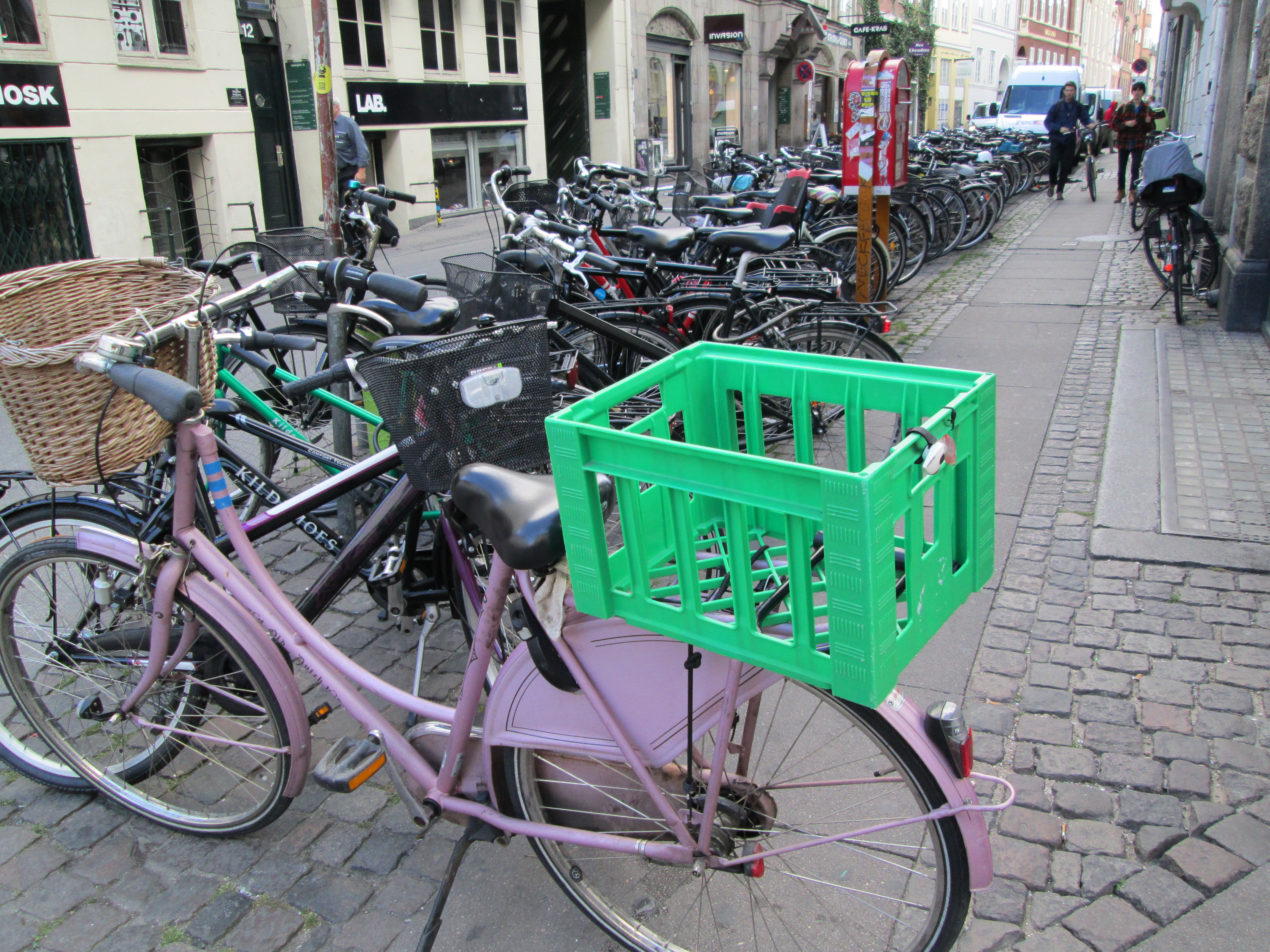 CURWOOD: How important are efforts by cities to reduce carbon emissions?

GERDES: The effort to slow climate change is really going to be won or lost in cities. Cities are responsible for around two-thirds of both energy consumption and carbon emissions. So if we can follow the example of some of these forward-thinking cities like Copenhagen – ones that are already presenting a visionary way forward and can show best practices – I think other cities, especially ones in developing countries can learn from that example, and we can start putting a downward trajectory on emissions.

CURWOOD: How likely do you think it is that Copenhagen is going to meet this target?

GERDES: I think it is very likely. Right of center politicians in Denmark, in Copenhagen, are not climate change deniers. They support action on climate change. They only disagree perhaps on timelines and how much public money might go toward the effort. So, for example, the carbon neutrality plan that passed in Copenhagen in August of 2012, it did so with support of right-of-center politicians. Similarly last year in March, there was a national energy plan that passed in Denmark that's going to get the county off fossil fuels entirely by 2050. And it passed parliament with the votes of 171 of 179 members at near consensus, which is pretty unthinkable in the context of today's US political climate. 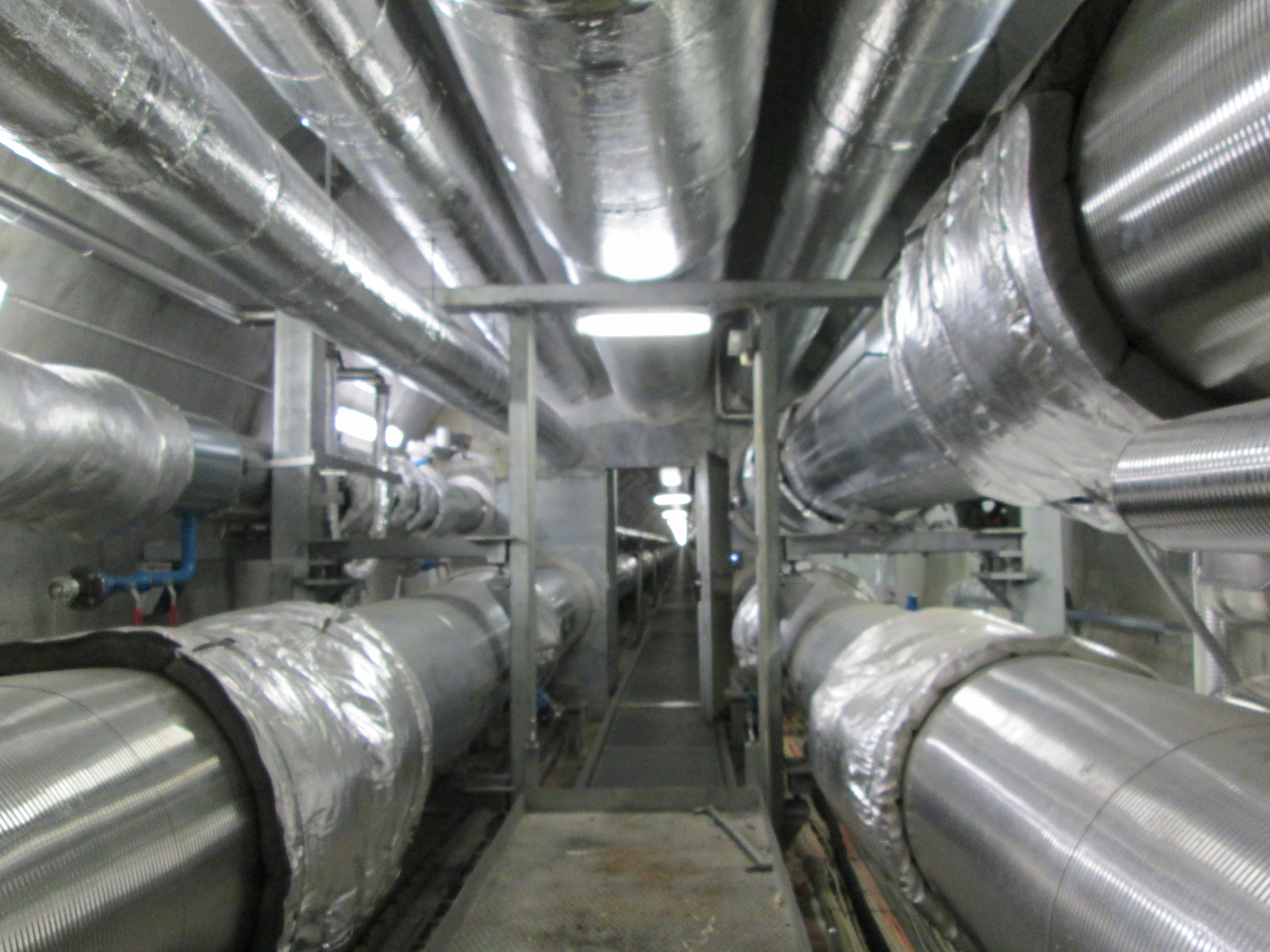 CURWOOD: Justin Gerdes is a freelance environmental journalist. Thank you so much for your time.

GERDES: Thank you so much. Thank you for having me.