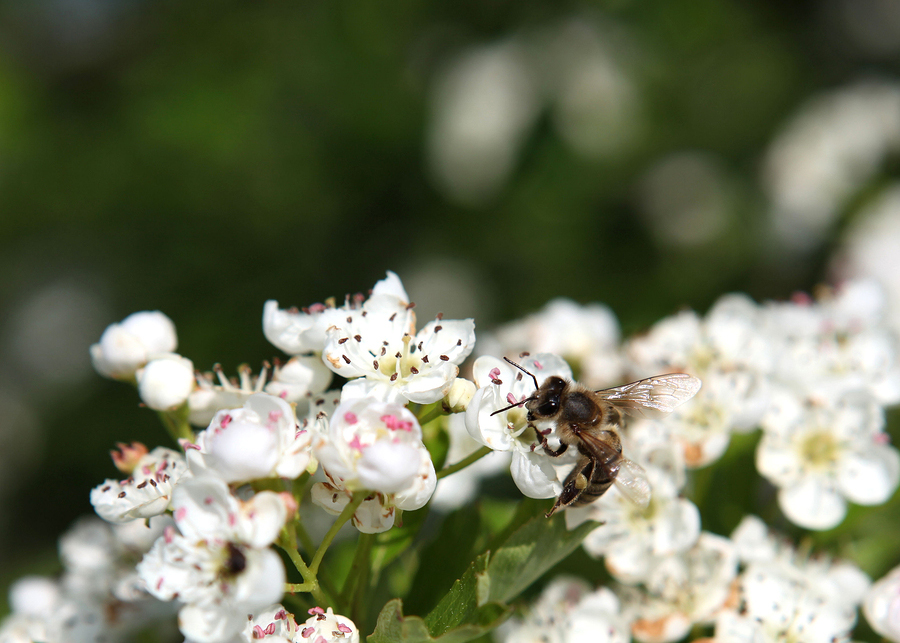 Bee on a flower (photo: Bigstockphoto.com)

A coalition of beekeepers and environmental organizations is suing the EPA to get tighter regulations for insecticides called neonicotinoids. The group argues the agricultural pesticides contribute to the dramatic decline in honeybee populations. Peter Jenkins, a lawyer for the Center for Food Safety, tells host Steve Curwood they pose risks for birds as well.

CURWOOD: From the Jennifer and Ted Stanley Studios in Boston, this is Living on Earth. I’m Steve Curwood.

At last, the blush of spring is in the air. It’s been in the 60s in Denver, Kansas City and Nashville, and even in snow battered Boston the mercury is flirting with the 50s. Near our studio the crocuses are out, all orange and white and purple and the first daffodils are flashing a cheery yellow from sheltered spots. Time for our resident beekeeper, Helen Palmer, to check the hives.

PALMER: So I have 2 hives out on my back deck. I’ll need my hive tools and the brush. The first thing to do is take off the cover. 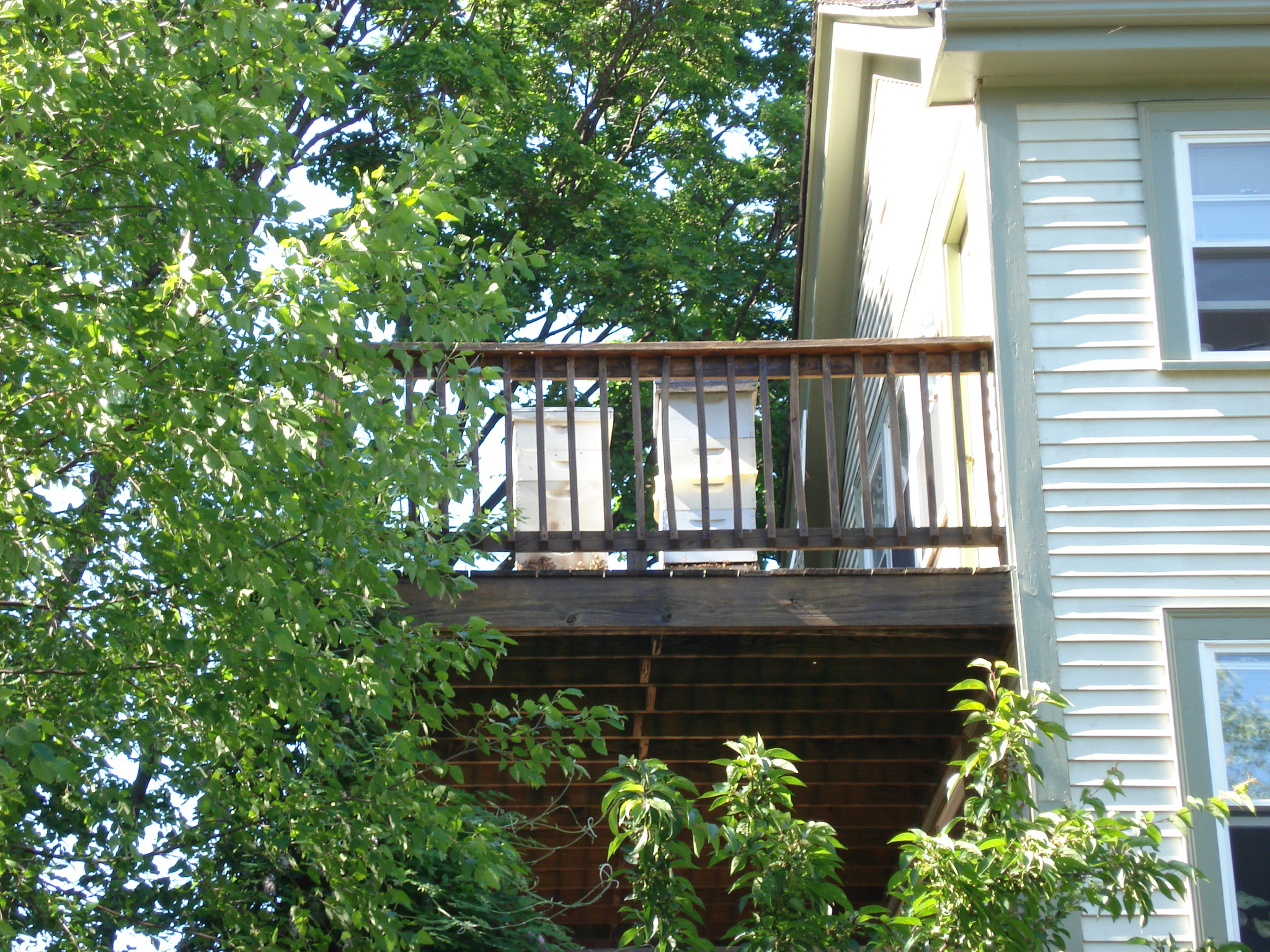 Some beekeepers, including Living on Earth's Helen Palmer, find their bees have not survived the cold winter. Helen Palmer's hives on her deck in the summer. (Photo: Helen Palmer)

PALMER: I’ve got a couple of supers on top here...just stack them up. Then you take the hive tool, which is a kind of thing to pry off the top insider cover with...so the inside cover. And now I’m down to what’s called the hive body, and I don’t...oh, I see dead bees. Many dead bees. Wonder why they died? I think it’s partly because it was so cold. 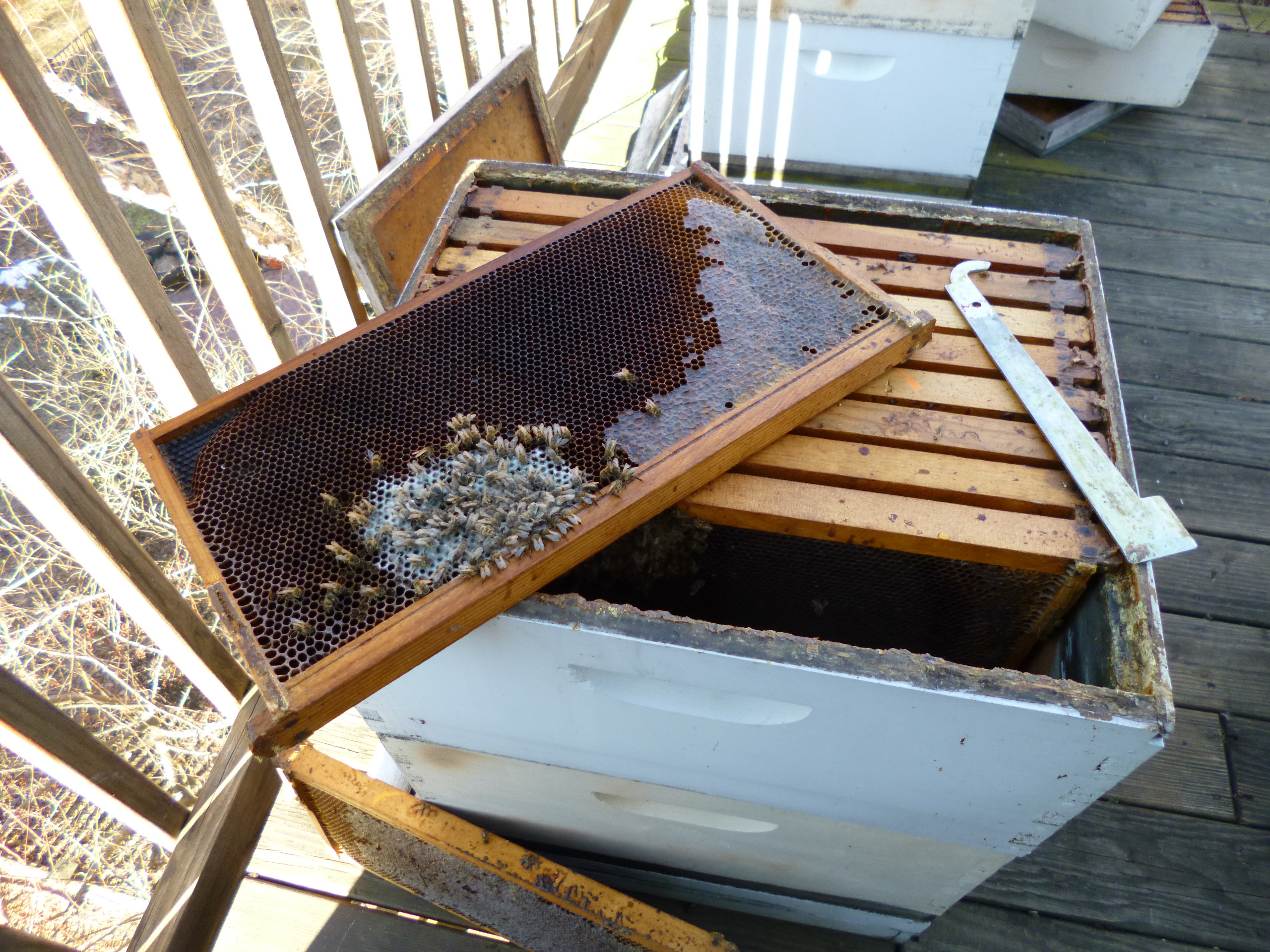 Dead bees and mold on a frame. (photo: Helen Palmer)

[BIRD CHIRPING, SOUNDS OF LIFTING OUT A FRAME]

PALMER: Now here’s the thing. This is a frame absolutely full of honey. So that means they didn’t die of hunger. And this next one here covered with bees and full of honey...ah, but I see mold. Mold is one thing that really does seem to affect them if it gets damp inside the hive. But there’s lots and lots and lots of honey. It isn’t a shortage of honey. I don’t know what they died of. So I have two hives full of dead bees. That's the most depressing thing.

CURWOOD: So what killed Helen’s bees this time? Prolonged cold can do it. And bees face other stressors - mites, mold, and diseases that experts think contribute to Colony Collapse Disorder that's emerged over the last seven years or so. A number of studies incriminate a relatively new class of pesticides called neonicotinoids, two of which got federal approval in the US in 2003.

These chemicals though have already been banned in some European countries, but the US Environmental Protection Agency declined last year to restrict their use here. So now a coalition of beekeepers and environmental advocates, including the Center for Food Safety, is suing the EPA. Peter Jenkins is a lawyer for the Center. He says birds as well as bees are at risk. 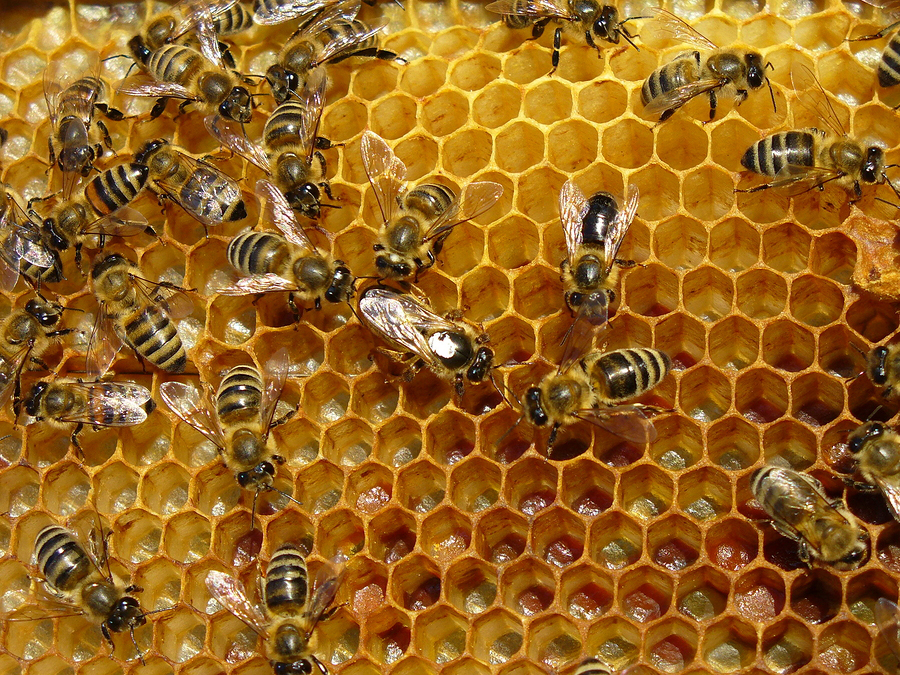 Bees on the honeycomb (photo: Bigstockphoto.com)

JENKINS: The estimates are that neonicotinoids are being used over 200 million acres of this country, which is...well, the country of Germany is 100 million acres. So 200 million acres...imagine two Germanys next to each other. But we actually know they’re used in hundreds of different products including household and garden products.

So we’re very concerned about them, mostly because they’re systemic products, meaning that they don’t just last for a short period of time after being sprayed or used. They are designed to be absorbed into the plant and become part of the plant and turn the plant into toxic plants as far as insects go. That’s their whole purpose. They’re insecticides. 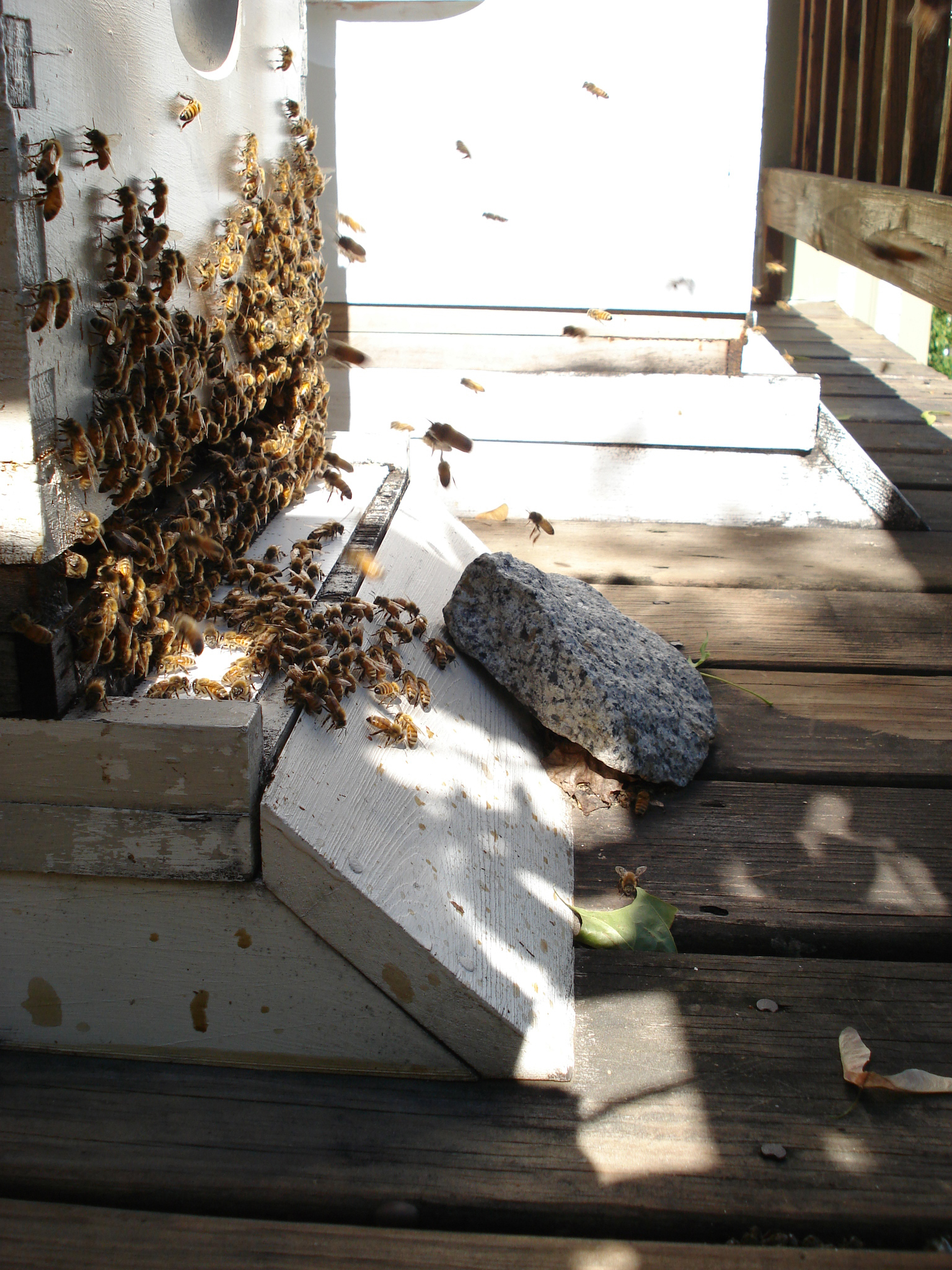 Bees clustered round the hive entrance in the summer. (photo: Helen Palmer))

CURWOOD: What proof is there that this class of chemicals, these neonicotinoids, are involved in the collapse of bee populations?

JENKINS: Well, it’s just been accumulating proof. Actually we think it’s been clear since the chemicals were first registered. EPA’s own scientists took a hard look at them internally and said these things are going to kill bees - we need detailed studies before approving them. And that was back in 2003.

But those scientists in the agency were overridden by apparently upper level managers who said, “Well, we think we can live with them, and we’ll allow them to go onto the market, we’ll allow the companies to do the studies after they’ve been approved and used across the country.” And that’s sort of what the lawsuit that we’re involved in is about.

CURWOOD: So as I understand it, your case has been brought with several environmental groups, as well as some professional beekeepers. You’re suing the EPA. What exactly do you want to see happen?

JENKINS: Well, we would ask a judge to look at three main problems that have come up. The first is this whole question of what I sort of alluded to, which is conditional registration, which is a process inside our insecticide and pesticide laws that allows EPA to approve these products conditionally; and the condition is that the company has to perform a number of studies that the EPA mandates as part of the approval.

And the problem is that while the EPA mandated that a lot of these conditions be met, it’s been 10 years - in some cases, 11 years - since those mandates were made part of the approvals and the company still has not come back with the studies showing these insecticides are safe. Some estimates are that two-thirds of approved pesticides have this conditional registration issue.

CURWOOD: And what else are you suing them about?

JENKINS: Well, another part of the suit is the Endangered Species Act. This gets into broader, beyond bees questions. We know these pesticides, neonicotinoids, not only impact bees; they impact whole ecosystems. They’re very persistent. They last for several years in cases. And they run off into surface water and they get into ground waters. We know they impact aquatic invertabrates; we know they’re impacting birds and other species as well.

We’re very concerned we may be looking at a second “Silent Spring” sort of scenerio where we’re just using pesticides and insecticides that are too good. They’re sterilizing whole ecosystems. And then we want to be sure to look at the indirect effects on birds, migratory birds, and all sorts of other species.

CURWOOD: As I understand, the European Union is talking about imposing a ban on the use of these chemicals.

JENKINS: That’s right. The Europeans have confronted these same sort of insecticides. As you can imagine, Bayer, the company that makes clothianidin and a lot of these products, is based in Germany, and ironically, Germany is one of these countries that has banned certain uses of these insecticides.

Other countries that have already banned them are Slovenia, France, Italy, Austria and Sweden - and that was several years ago. But then, just in the last year, it’s really come to a head in Europe because of some highly significant new studies that came from France and from England showing devastating impacts of these insecticides on bees and bumblebees.

CURWOOD: If the populations continue to decline, what kind of impact do you think it will have on food production here in the U.S.?

JENKINS: Great question. And it’s really come to a head just the last few months in California in the almond industry. I don’t think people realize, but almonds are California’s number one crop these days, and almonds are 100 percent dependent on honeybee pollination. 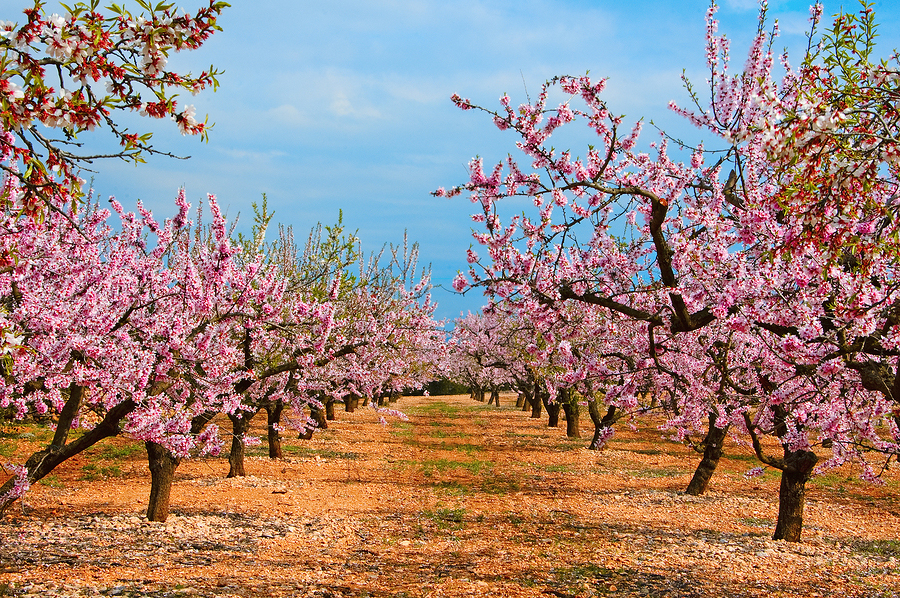 Almond trees are 100% dependent on bees for pollination. (Bigstockphoto.com)

This year has been the worst year for almond pollination in memory where they have just barely able to get enough bees, probably not able to get enough bees to...you know, the commercial migratory bee keepers come in, and they’re being offered huge amount of fees to pollinate these nuts compared to historical records, yet they still haven’t been able to produce enough. And I guess the proof will be in the pudding when the trees try to produce the nuts in a few months. But the reports back from the California almond industry are there’s been a real crisis of pollination.

And that could continue on because these same migratory bee keepers, some of them who are in our lawsuit then will go pollinate apples in Washington state and berries in Massachusetts and Maine...and they do a big circuit around the country pollinating. And if the bees are too weak to do it, then they just can’t meet the contracts.

CURWOOD: In 2012, there were several environmental organizations and beekeepers who petitioned the EPA to restrict the use of these chemicals. What’s different now? What kind of success do you expect out of this lawsuit?

JENKINS: Since we did our petition, there’s been really literally dozens of studies that have come out and all this regulatory action in Europe, and, of course, this continuing bee loss where this year the bee keepers are expected to lose up to 40 percent of their bees.

And then, on top of that, you get a report like the American Bird Conservancy saying look, this is not just about the bees, this is about ecosystems and birds and enviromental sustainability. So that’s really what I think makes the case very compelling and one of the reasons we went to sue.

CURWOOD: Peter Jenkins is a lawyer for the Center for Food Safety. Thank you so much for taking this time today.

JENKINS: Thank you. I appreciate it.

CURWOOD: Syngenta and Bayer, two of the makers of neonicotinoids, argue any harmful effects on bees are unproven and a ban would be costly, but other researchers say insect pollinators contribute close to $200 billion dollars to food production worldwide.